Nearly two years ago, a top general urged a probe into illegal "ghost detainees" held at Abu Ghraib prison. But according to the Pentagon, it never happened -- and never will. 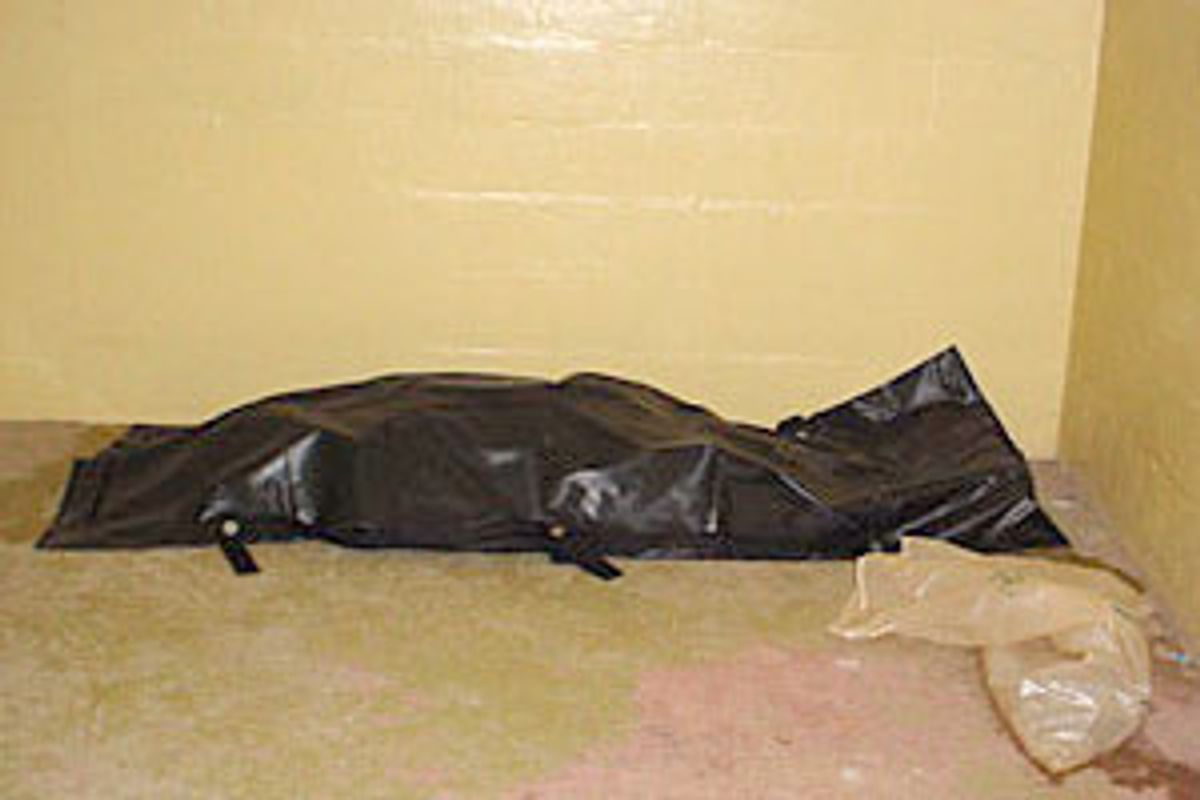 In spite of a strong recommendation by a top Army general, the Pentagon has failed to investigate the military's role in handling "ghost detainees," prisoners secretly held and interrogated by the U.S. government at Abu Ghraib prison and elsewhere in Iraq. Nearly two years ago, in multiple meetings, Army Gen. Paul J. Kern briefed Defense Secretary Donald Rumsfeld and top Army officials about the need for such a probe. In an interview with Salon, Kern, now retired, said he left those briefings with the expectation that an investigation would be carried out. According to a Department of Defense spokesman, however, no Pentagon investigation has taken place, nor is one planned.

Kern headed a major investigation in 2004 into detainee abuse at Abu Ghraib, known as the Fay-Jones report. "When we finished the report, we felt there was an unfinished part that needed to be done with respect to ghost detainees," Kern told Salon. Based on his findings, Kern concluded that the Pentagon needed to look into the arrangement, between the Army and the CIA, under which the military held prisoners in secret -- a violation of the Geneva Conventions.

In addition to his multiple briefings with Pentagon leaders, in August 2004 Kern publicly called for an investigation into the matter of ghost detainees. And on Sept. 9, 2004, Kern told the Senate Armed Services Committee that the Department of Defense Office of Inspector General, then headed by Joseph E. Schmitz, had "agreed" to conduct an investigation. Kern told Salon last week, "I look forward to it being finished."

The absence of an investigation by the military -- which could also shed light on the CIA's role at Abu Ghraib and in the broader war on terror -- is another obstacle to uncovering the full truth about what took place at the prison. To date, all U.S. government investigations into detainee abuse have been controlled by the Rumsfeld Pentagon, a process critics say has been far from adequate.

Few details are known about the ghost detainee operation, which was run in the intelligence wing of the prison. Past reports, along with testimony from Army investigations obtained by Salon, draw at least an outline of the operation: The CIA would covertly deliver prisoners, interrogate them and remove them. The Army would house the detainees in the intelligence wing -- with no official record of their existence -- and military police would take them to and from CIA interrogations.

In his testimony to Congress in 2004, Kern said that the number of ghost detainees who had passed through Abu Ghraib was "in the dozens, to perhaps up to 100." At least one ghost detainee is known to have died during interrogation by the CIA inside Abu Ghraib.

Kern told Salon that he had attempted to dig deeper into the murky ghost detainee operations while heading the Abu Ghraib investigation in 2004. But he was rebuffed repeatedly by staffers in the Defense Department's inspector general's office, who told him that ghost detainees fell outside Kern's jurisdiction. According to Kern, they insisted that it was a job for the inspector general's office.

When asked about a ghost detainee investigation during Senate hearings this February, Rumsfeld sidestepped the issue. "It is the CIA inspector general that is doing that," Rumsfeld said. A spokesman in Rumsfeld's office told Salon that he would provide an explanation for the missing Department of Defense inquiry, but after a week referred the matter to another spokesman who handles issues concerning the department's inspector general's office. That spokesman did not respond to Salon.

Comerford, the spokesman for the inspector general's office, also told Salon, "Our office received no request for any investigations on ghost detainees."

Critics of the Pentagon leadership fear that the lack of any investigation into ghost detainees by the military leaves a gaping hole in the quest for accountability.

"Having the CIA look into it is irrelevant because the CIA is not responsible for the actions of U.S. soldiers," Sen. Jack Reed, D-R.I., a member of the Armed Services Committee, said in a statement to Salon. "Hiding detainees runs contrary to military doctrine and is a violation of both U.S. and international law. If someone broke the law, it is important to figure out why they did so, who gave the orders, and to hold them truly accountable."

The Bush administration has long sought to blame prisoner abuse at Abu Ghraib on rogue, low-level military policemen who served at the prison. But according to past investigations of abuse at the prison, the ghost detainee operation existed as part of an official, though ambiguous, Army arrangement with the CIA. To date, it remains unclear who approved the arrangement within the military chain of command, though in at least one case, for a detainee known to soldiers as "Triple-X," Rumsfeld has publicly acknowledged that he personally approved a CIA proposal to temporarily keep this detainee off the official books.

Some legal experts believe the ghost detainee operation represents a "grave breach" of the Geneva Conventions, a crime that can carry a life sentence in prison. Military and civilian leaders who approved ghost detainees in Iraq could, in theory, be prosecuted.

"I would say that that is a critical failure because the law is so clear," said Mary Ellen O'Connell, a professor of international law at Notre Dame Law School, who has called for a special prosecutor to investigate the issue. "The disappearing of detainees is a part of that abuse" at Abu Ghraib and "should have been investigated just as much as the physical abuse."

The Geneva Conventions require that all prisoners be documented and made accessible to the International Committee of the Red Cross. A fundamental reason for these provisions of international law is that mistreatment of prisoners is more likely to flourish in conditions of anonymity and secrecy.

Attorney General Alberto Gonzales told the Senate in 2005 that those "who commit grave breaches" of the Geneva Conventions in handling prisoners of war should be brought before U.S. courts for prosecution. The Bush administration has also consistently declared that it accepts that the Geneva Conventions are binding in Iraq.

Yet to date, there is no indication that any military or civilian officials might face prosecution for the existence of ghost detainees at Abu Ghraib.

Cpl. Charles Graner, a former military policeman and convicted ringleader of abuse at Abu Ghraib, estimated that he processed 40 to 50 ghost detainees through the intelligence wing of the prison during the eight weeks he was there in late 2003. He recalled dragging an unconscious detainee back to his cell after an interrogation by the CIA that took place in a back stairwell of the prison, according to the transcript of an April 2005 interview with Graner conducted by Army investigators. "You know these guys can kill people," Graner said about personnel working for the CIA, commonly referred to in military jargon as an "other government agency." "The OGA guys do whatever they want," Graner recounted. "They don't exist."

At least one ghost detainee interrogated by the CIA inside Abu Ghraib died there. The death of Manadel al Jamadi on Nov. 4, 2003, was later ruled a homicide by military investigators. Jamadi died as a result of "blunt force injuries complicated by compromised respiration," an Army autopsy showed. Pictures of his body, packed in ice, later shocked the world when the Abu Ghraib photos became public in 2004. Jamadi was first captured in Iraq and roughed up by military Special Forces, who later turned him over to the CIA for interrogation at Abu Ghraib.

Several guards at the prison have said that Lt. Col. Steven L. Jordan was the contact point there for the CIA and that Jordan would be there to physically accept the detainees brought in by the agency. Jordan told an Abu Ghraib investigator, Maj. Gen. Antonio M. Taguba, that the CIA wanted to be able to remove their prisoners from Abu Ghraib quickly and take them to places unknown. As Jordan put it, "The OGA folks wanted to be able to pull somebody in 24, 48, 72 hours if they had to get 'em to GITMO [Guantánamo Bay, Cuba], do what have you."

Criminal charges were recently filed against Jordan, making him likely to be the first officer to go on trial for his role at Abu Ghraib. But the charges do not address the ghost detainee issue.

To date, no one in either the CIA or the military has been prosecuted in connection with Jamadi's death, or for the apparent illegal treatment of dozens of other ghost detainees. There are no known plans for a future investigation by the Pentagon.