Tuesday's episode delivered a trademark barrage of taste-defying gags to a laugh-track-free beat -- and a surprise ending! 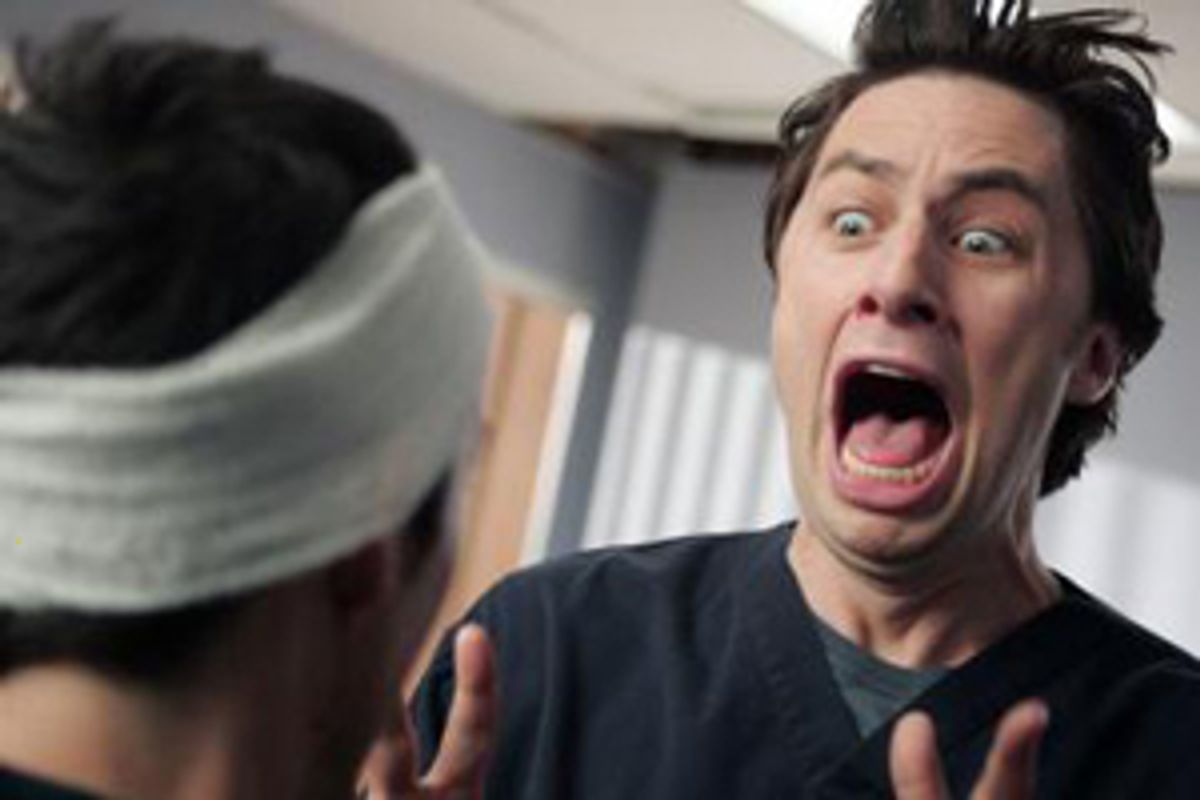 Being a "Scrubs" fan is a little like being a Neil Diamond fan. It's the kind of thing that originally seemed so cheesy you didn't want to admit it, but somehow over the years gained its own warped credibility. It's not so much that the thing itself has changed; it's just that maybe the rest of us have finally discovered its loopy, heartfelt charm.

When the series premiered five years ago, it didn't stand out in the prime-time wasteland of high-concept sitcoms. A bunch of idealistic, attractive and mistake-prone young doctors fumble their way through hospital residency, butting heads with their cranky superiors and having implausible encounters with their colorful patients. It's a show that has stunt casting (hello, two-episode arc with Zach Braff's girlfriend Mandy Moore!) and just plain stunts (hello, "Wizard of Oz" episode!) galore, which makes the fact that it's so damn good all the more impressive. This is a show that's made Tara Reid funny and Molly Shannon poignant.

But "Scrubs'" real revelation, from the first season through this, its most brazenly, risk-takingly surreal one, is how much tender humanity it manages to bring to the most absurd situations. It may carry the whiff of must-see TV, but it's closer in spirit to "Buffy the Vampire Slayer" and "Veronica Mars" -- shows that make you laugh at their wry wit, the better to devastate you later as they put their characters through the wringer.

Full of dream sequences, imagined conversations, Dr. "J.D." Dorian's (Zach Braff) deadpan narration, and jokes about crystal meth labs and melon-size prostates, Tuesday's hourlong season finale delivered a trademark barrage of taste-defying gags to its blissfully laugh-track-free beat. Winding down for the summer, Sacred Heart Hospital was ripe with "that end-of-the-season smell" -- an aroma that, it turns out, isn't as enticing as eau de midseason.

In wrapping up its assorted plotlines, "Scrubs" fell short on offering the day-to-day, life-and-death dramas that give it its soul. At its best, the show has always used the routine mortality of a hospital to explore the very different ways human beings grapple with the frustrating, downright pathetic fallibility of body and spirit. When, earlier this spring, Dr. Cox (John C. McGinley) made a hasty wrong decision regarding transplants that resulted in the loss of a string of patients, their deaths, and Cox's resulting plummet into drinking and depression, were a kick in the pants to anybody who thinks you have to be "E.R." or "House" to do medical drama right. Even more affectingly, an episode in which the Janitor (whose name remains a mystery because, really, who's going to take the time to learn it?) embarrasses himself trying to be heroically helpful gave a measure of dignity to one of the show's most caricatured players.

The season finale, in contrast, erred more on the side of sitcom, although the writing is so funny it could almost be forgiven for one poop joke too many. Elliot (Sarah Chalke) is fed up with her boyfriend, Keith (Travis Schuldt), but eventually comes back around. Nurse Carla (Judy Reyes), whose pregnancy has snowballed from a line on a stick to full-blown waddling seemingly overnight, is a basket case of hormonal overreactions, mostly aimed at her amiable, fashion-impaired surgeon spouse, Dr. Turk (Donald Faison). The spectacularly abrasive Dr. Cox and his even more hostile significant other, Jordan (Christa Miller Lawrence), are no sooner basking in the glow of having a toilet-trained toddler than they discover that Cox will want a refund on that vasectomy. Thrown in for good measure are vampire spoofs, vandalism with golf clubs, aging homosexuals, a cappella jingles used for the purposes of torture and an in joke about the opening credits. There's also the obligatory dose of stunt casting, this time in the form of Elizabeth Banks ("The 40-Year-Old Virgin") as Kim, a urologist whose suspect judgment is mitigated by her spectacular hotness. She's here, of course, to wind up dating J.D., and she inevitably does. But when her hands find their way to his crotch, it's not, unfortunately, in quite the way Dr. Dorian had hoped.

As the episode ends, fittingly, to the awesome strains of Neil Diamond's "Delirious Love," couples are paired off under the stars, embracing all that love and the night can offer. It's a display of the cast's easy chemistry -- the sly, happy glance exchanged between the usually brittle Cox and Jordan, a quick warm look between exes J.D. and Elliot as she clears the way for his budding relationship with Kim. It seems a gently romantic way to float away for the summer, with a kiss and a melody. So it comes as a pleasant sting when the words "Two and a half weeks later" appear onscreen, and Kim informs a bouquet-brandishing J.D. that she too is pregnant. Stunned, J.D. leaves us for the summer with a gaping jaw and just one question: "What now?"