"The Man of My Dreams"

In the follow-up to her sleeper hit "Prep," Curtis Sittenfeld captures the pain of growing from girl to woman. 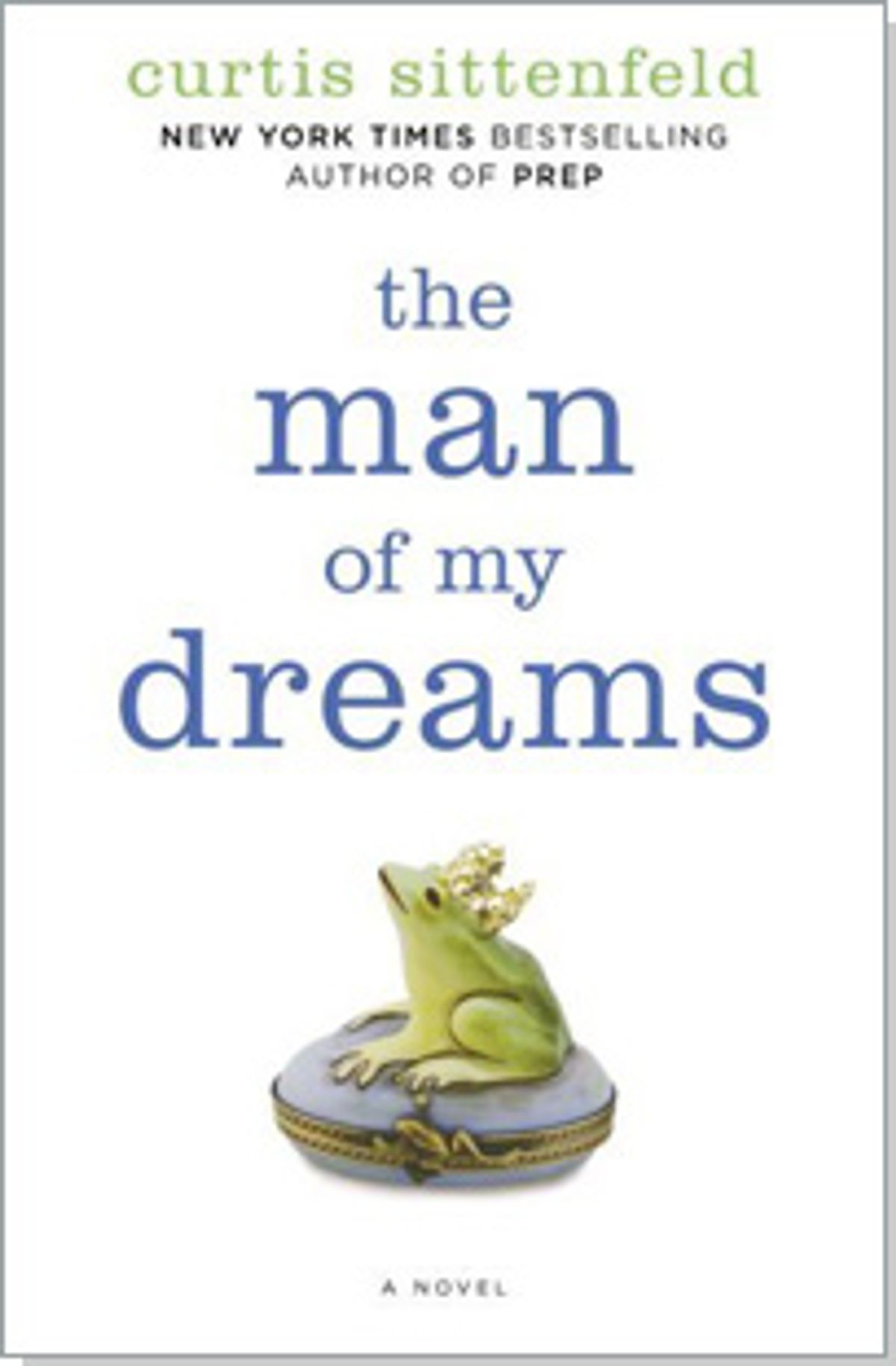 In the second week of Hannah and Oliver's relationship -- which is already messy, because dating a co-worker is never a good idea -- he announces that earlier that morning, another woman in their office gave him a blow job in the handicapped bathroom. Oliver is Boyfriend No. 2 for Hannah in Curtis Sittenfeld's new novel, "The Man of My Dreams," but if you're thinking to yourself that Oliver may not be the man of her dreams -- or anyone's, really -- you are right. Don't tell that to Hannah, though. She thinks he might be "the best I can do."

"The Man of My Dreams" is the story of Hannah's search for love in all the wrong places, bathrooms included. It opens in the summer of 1991, when Hannah is 14 and living in exile with an aunt and uncle after her emotionally abusive father kicked her, her sister and her mother out of the house. Jumping in time, we next find her at Tufts University, and finally, as a woman in her 20s, working at a nonprofit. She takes up with Oliver after breaking things off with her doting college boyfriend Mike, and before spending a couple of years lusting after her best friend Henry. Grown up and looking back, she understands each as a certain type -- "the man who is with you completely, the man who is with you but not with you, the man who will get as close to you as he can without being yours." There may be other possibilities, she hopes, but she "can't imagine what they are."

Obsessed with boys as a teenager, Hannah doesn't date, or kiss one, until college. When she sleeps with Mike for the first time, she is neither impressed nor devastated. She is confused -- " Really? Just this? " she thinks -- but also relieved. At last, she is like other people. She feels a little closer to normal.

As a college student, Hannah finds normalcy is more romantic than love -- she is not like the others she sees on campus, who fall easily into each other's arms and beds. She passes Friday nights alone in her dorm room and fantasizes about being married, when she can stop worrying about parties and just grab takeout and a video. (Lucky for her, she is described by Henry as "exactly the kind of girl a guy marries" -- just before he turns and throws away his burrito wrapper.) She knows she is chronically "judgmental and disappointed," but she doesn't know if she can change. And besides, "the unflattering things she notices about other people, the comments she makes that get her in trouble, aren't these truer than small talk and thank-you notes?"

In this Hannah is very much -- perhaps too much -- like Lee, the protagonist of "Prep," Sittenfeld's bestselling first novel. Both young women experience life behind a screen, as a series of things that happen to them; they are dedicated anthropologists who study their peers, looking to the behavior of others for the secret of their confidence. Like Lee, Hannah is not particularly gorgeous; neither is she devastatingly witty, or brilliant. She lacks hobbies and passions, devoting most of her free time to finding fault with others and examining herself with the same microscope. This close attention to social behavior -- so typical of girls and young women -- is familiar. It is easy to feel close to Hannah, to feel that she is someone you have known, or have been.

When she's alone one Friday night, "She wishes she owned nail polish so she could paint her nails right now, or that she wore make-up and could stand before the mirror, with her lips puckered, smearing them some oily, sparkly shade of pink. At the very least, she wishes she had a women's magazine so she could read about other people doing those things."

More than anything, Hannah is blank, propelled not by goals or aspirations, by likes or dislikes, but by outside events. She reacts to, and is formed by, whatever happens to come her way. Because of that, "The Man of My Dreams" makes for strange reading -- a character study that is driven by plot. It is an ordinary, routine journey of divorce, remarriage, boyfriends had and lost, but Sittenfeld makes it captivating, like another family's home movies. She writes in the third person, inside Hannah's head, which turns reading into something closer to eavesdropping. Like here, when Hannah takes a camping trip with her sister Allison, Allison's fiancé, and the fiancé's brother Elliot, Hannah is forced to share a tent with Elliot. She's drawn to him, but notices he has a crush on her sister.

"It is in this moment, in his worship of Allison, that Hannah feels a weird kinship with Elliot. Watching them, she can feel in her own hand the desire to touch this girl's wavy hair, this girl whose kindness and beauty could make your life right if you could get her to be yours. Hannah wonders if Elliot imagined she would be another version of Allison."

In this moment, as in so many others, it is easy to slip inside Hannah, to get into her head. And because Sittenfeld is so good at bringing Hannah to life, she is also very good at getting you to turn the pages.

Unlike "Prep's" Lee, Hannah is not just a morose adolescent -- she is a depressed adult. She is not deeply ashamed of her father, but has been damaged, traumatized by his outbursts. The screen she hides behind doesn't just separate her from others, it makes her into a bit of a zombie, removed from her own feelings. After Oliver tells her about the bathroom blow job, "it occurred to her that she should feel more devastated than she did." Any emotional outbursts embarrass her; she is even bemused by Mike's passionate defense of migrant workers, which she finds "silly." During her childhood, "any given day was about not stirring the pot, so people who stir the pot voluntarily" strike her as "playing a game, even if they're not aware of it."

This attempt to preserve balance and tranquility means that Hannah does what she thinks she should do, not what she wants to do -- a problem compounded by the typical confusion around determining what it is one really wants. (She and Mike take a walk along the Charles River, which she "imagines will feel fake-romantic, like they're trying too hard," but is surprised that "it just feels nice.") For her, life is a problem to be solved, a code to be cracked: While at Tufts, she begins to see a therapist, Dr. Lewin. When she returns each week from her session, she scribbles down notes, trying to force an epiphany, imagining that "when enough pieces of paper have accumulated" she will "understand the secret of happiness." The drama of the novel is Hannah's passage from adolescence to maturity; she only grows up, becomes unstuck, when she learns how to go after the things she wants instead of trying to follow an imaginary script.

Still, with all that recommends "The Man of My Dreams," why did Sittenfeld choose such an awful title? In this month's Glamour, she writes that it is meant to be "more than a little ironic," but irony or no, it's cringe-worthy. And given the care she has taken to develop Hannah slowly, to let the impact of each new year and major change sink in, the ending is baffling -- a letter to Dr. Lewin, in which Hannah recaps the previous two years. It seems like she runs out of steam at the end, even taking the downright corny shortcut of resolving a major argument with the appearance of a rainbow.

But Sittenfeld's ear for dialogue is always sharp, and her observations can be shiver-inducing. She is especially good at capturing the spaces that divide people from each other, the invisible gulf between how we see ourselves and how others see us -- and the sadness when we get a glimpse of that divide, when what one thinks is keen observation is revealed to be simple misperception. One night Hannah and Frank, her mother's second husband, see an elderly family friend home. After a trying visit in which stooped, slow Mrs. Dawes breaks a glass, insists on cleaning it up herself and refuses to be helped on the stairs, they sit in the car together.

"Frank shakes his head. 'I never want to grow old, Hannah,' he says. She looks at him in astonishment. She thinks, But you already are."

At the end of "Prep," it was easy to think, Thank God that's over and I never have to go back to the horrible person I was in high school and all those other horrible people I knew. Closing "The Man of My Dreams," someone in her 20s might wonder, Is this ever going to end? Sittenfeld captures the pain of growing up in such a raw, palpable way, that it is a relief to finally close the book and put it aside. Of course, if characters have lives when books end, Hannah will still have to move forward, into an unknown future. It's a testament to Sittenfeld's writing that there's no way to guess what will happen when she gets there.