Beyond the Multiplex: Cannes

Off with her head! Sofia Coppola's "Marie Antoinette" gets booed! Plus: Brad Pitt and Cate Blanchett take the screen. 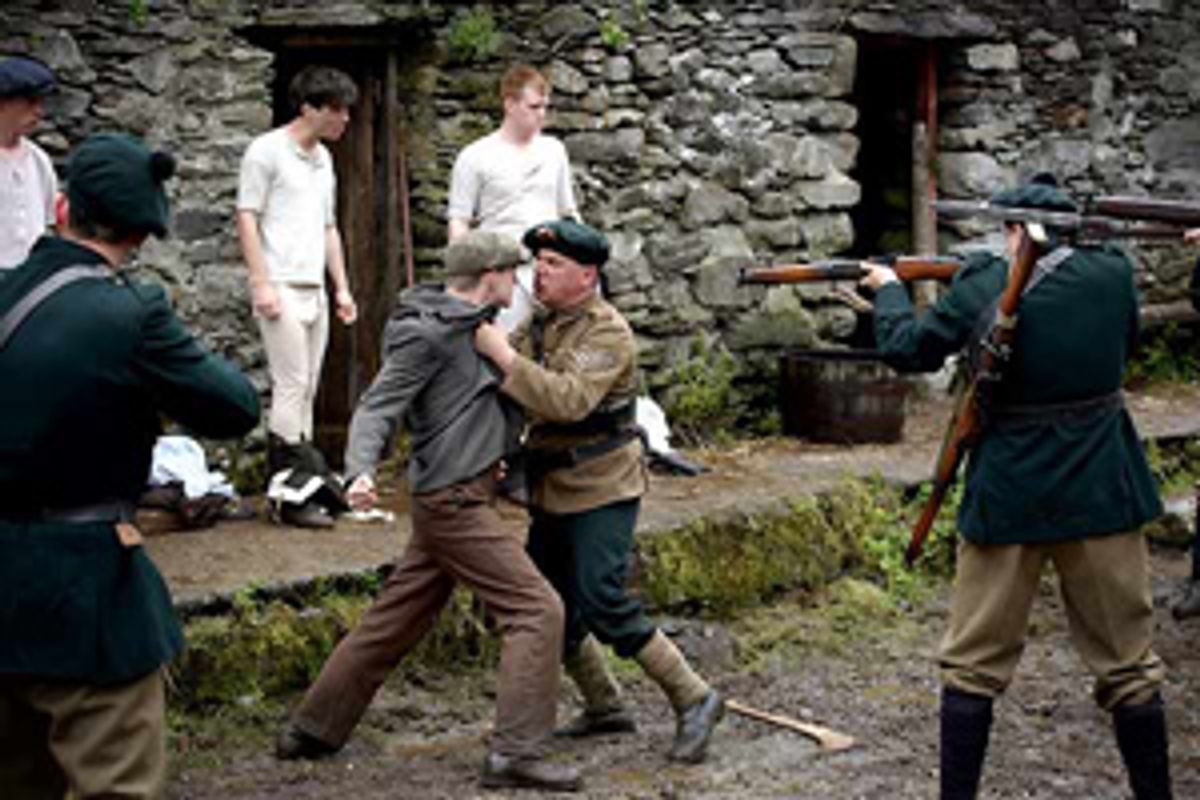 Sofia Coppola had me from the first 10 seconds of "Marie Antoinette," her attempt to remake the historical costume drama for a 21st century audience. Over the opening title credits, and then our first glimpse of Kirsten Dunst as the doomed girl-queen of France, languishing in an overdecorated chaise and sampling pastries, we hear the jagged opening chords of "Natural's Not in It," by late-'70s art-punk legends Gang of Four. So began a film that promised to deliver a confident blend of celebration and critique, a double shot of visual and aural excitement.

Or so it seemed. Unfortunately that first 10 seconds was followed by another and another and another, and after two hours of those little series of seconds, it felt as if the staccato energy and sporadic sensual delights of "Marie Antoinette" had dissipated. Then the final credits arrived. And then the booing started. Yes, really. No other film in competition at Cannes this year has been booed, not even Richard Kelly's thoroughly derided and incoherent "Southland Tales," which is much duller than "Marie Antoinette."

Sure, there was some applause mixed in there as well, and it wouldn't be fair to say the booing was especially loud or persistent. But still. Considering the anticipation surrounding Coppola's follow-up to "Lost in Translation," and the pre-premiere hype here (Coppola and Dunst are on the covers of several French film magazines), the reception at Wednesday morning's press screening was close to disastrous.

Maybe the celebrity-larded audience for Wednesday night's red-carpet premiere will be more forgiving, but it seems clear that "Marie Antoinette" is yet another of this year's Cannes problem pictures, and its commercial future is very much in doubt. Interest in this film was running so high here (thanks, I guess, to the subject matter) that Pathé, Coppola's French distributor, will open "Marie Antoinette" immediately, months ahead of its U.S. release. Sony has a significant chunk of change invested in this title, and marketing it in the fall after a belly-flop in France presumably isn't what it had in mind.

If you've seen the thrilling online trailer for "Marie Antoinette," you get Coppola's central gambit: This is a full-dress historical epic, with all the gowns and ruffles, not to mention cakes, hats, monkeys, elephants and authentic Versailles locations, that the form demands. But Coppola tries to translate the decadence and hedonism of Marie Antoinette's court into a language we can understand, and the key guidebook phrase in that language is "Don't You Want Me Baby?"

OK, that song doesn't literally appear, although it should. The soundtrack moves from Gang of Four to Siouxsie and the Banshees, the Cure, New Order and Bow Wow Wow, along with more recent club tracks from the likes of Aphex Twin. Add in the unexplained scenes of Marie and pals snorting fine powder off their wrists and smoking from long, exotic pipes, and the general feeling is very Danceteria 1988. (Yes, I know, the powder is presumably snuff and the pipes contain Virginia's finest native herb.) This impressionistic take on the 18th century Bourbon court is lots of fun as far as it goes. But you can only set one court minuet to Siouxsie's "Hong Kong Garden," and one all-night party to New Order's "Ceremony," before the intoxication starts to wear off. Coppola lacks the committed, demented genius Baz Luhrmann brought to "Moulin Rouge," and when "Marie Antoinette" isn't being crazy and decadent it becomes a bit too pretty, proper and trivial for my taste. (Anyway, "I Want Candy" for a montage of girls trying on shoes, scarfing pastries and guzzling Champagne? Please.)

Dunst brings a wonderful girlishness to the feckless Austrian princess who became first the darling of the aristocracy and then the most hated woman in France. But beyond convincing us that Marie Antoinette was an ordinary, irresponsible kid stuck in a ludicrous situation, Coppola provides almost no cultural or social context for the prodigal Bourbons and their sudden fall. Her attempts to supply the relevant historical information are perfunctory, and she might have been better off not bothering. Jason Schwartzman is almost invisible as the hapless Louis XVI, but Rip Torn (as his grandfather, Louis XV) and Judy Davis (as an especially imperious court lady) inject some much-needed life into the proceedings.

This is melodramatic, but Cannes seems almost in shock after the near debacle of "Marie Antoinette." (There's already speculation that both it and "Southland Tales" will be reedited, a lot or a little, before meeting American customers.) We've had almost uninterrupted sunshine on the Riviera this year, but with most of the major Cannes premieres now behind us, the forecast for semiserious cinema remains cloudy. Pedro Almodóvar's "Volver" remains the one solid-gold hit in competition this year, and the clear front-runner for the Palme d'Or. (You can listen to group interviews I sat in on with Almodóvar and his star, Penelope Cruz, who gives the performance of her career; they'll appear in Audiofile shortly.)

Another strong contender is "Babel," the new film from Mexican director Alejandro González Iñárritu and writer Guillermo Arriaga, the team behind "Amores Perros" and "21 Grams." An interlocking ensemble piece spanning four countries and at least six languages, "Babel" has the lonely status of being the big, ambitious piece at Cannes that works -- or mostly works. Brad Pitt and Cate Blanchett star as an American couple caught up in random violence deep in the Moroccan desert, while their nanny back in California takes a fateful road trip with their two kids and a horny deaf girl scours the Tokyo night for love.

While the connections between these stories range from obvious to highly tenuous, Iñárritu's film is, as you would expect, both dramatically involving and visually arresting. (Cinematography is by the terrific Rodrigo Prieto.) If the filmmaker had trouble going beyond banalities at his press conference, maybe that's because "Babel," in its flawed and sometimes overblown way, is after something almost elemental. While all the strands of the film involve parents and children -- and especially the exquisite terror of children in peril -- I think that's Iñárritu's arena for exploring the necessity, and also the impossibility, of human communication.

Iñárritu said he sees the film's title, and its plethora of spoken and signed languages, as symbolic. "For me, the many languages we speak in this room are not a problem. The problem is all the ideas and preconceptions that keep us apart. In our world, to see 'the other' is to experience danger, to be different is to be dangerous. This film, I hope, is not about what keeps us apart but what makes us similar."

As in two other much-discussed films here, Richard Linklater's "Fast Food Nation" and John Cameron Mitchell's "Shortbus," the current American political reality comes under sharp attack in "Babel," whose plot involves both war-on-terror hysteria and harsh immigration policies. (Podcasts of my recent interviews with Linklater and Mitchell will also post soon on Audiofile.) French director Bruno Dumont takes an enigmatic but no less angry approach in his grueling war film "Flanders," which follows a group of stolid, rural Frenchmen into an unexplained contemporary conflict somewhere in the Arab world.

"Flanders" has sharply divided viewers so far, and it has almost no commercial future outside France (where Dumont is something of a cult hero). Still, it's one of the most powerful films I've seen here, and I found its minimal dialogue and intentional anachronisms (the men ride horses into battle, at least at first) fascinating rather than annoying. Its portrait of war as a brutal, pointless exercise where men from the so-called civilized world are reduced to animal cruelty is familiar, but in its own stark fashion "Flanders" bears comparison with "Paths of Glory" and "Platoon," with a little of "The Sheltering Sky" thrown in.

Dumont may be depicting a psychological landscape more than an actual war in the real world, or he may be deliberately telescoping past and present history. (Like Dumont himself, the men do indeed come from Flanders, along the Franco-Belgian border, site of the bloodiest trench warfare of World War I.) As in his best previous films, "The Life of Jesus" and "L'Humanité," this is precariously balanced between brutality and compassion, artistic pretension and earthy naturalism. With the Palme d'Or jury headed by Wong Kar-wai this year, an arty, dark-horse award winner is by no means unlikely.

We have several more important films to go, including Linklater's other Cannes film, "A Scanner Darkly" (in the Un Certain Regard sidebar competition) and Guillermo Del Toro's fairy tale of life in fascist Spain, "Pan's Labyrinth." People here are excited about French director Xavier Giannoli's "The Singer" (frankly, I'd never heard of him before), and after that come Pedro Costa's social-realist study of the Lisbon, Portugal, slums, "Colossal Youth," and Israel Adrián Caetano's political thriller "Buenos Aires 1977," which has just secured U.S. distribution. But none of those pictures, good, bad or indifferent, will make headlines the way Sofia Coppola just did -- and none of them will face the guillotine.