The new documentary about Al Gore's crusade against global warming brings the notoriously awkward politician into focus as a human being -- but leaves unanswered the question, "Will he run?" 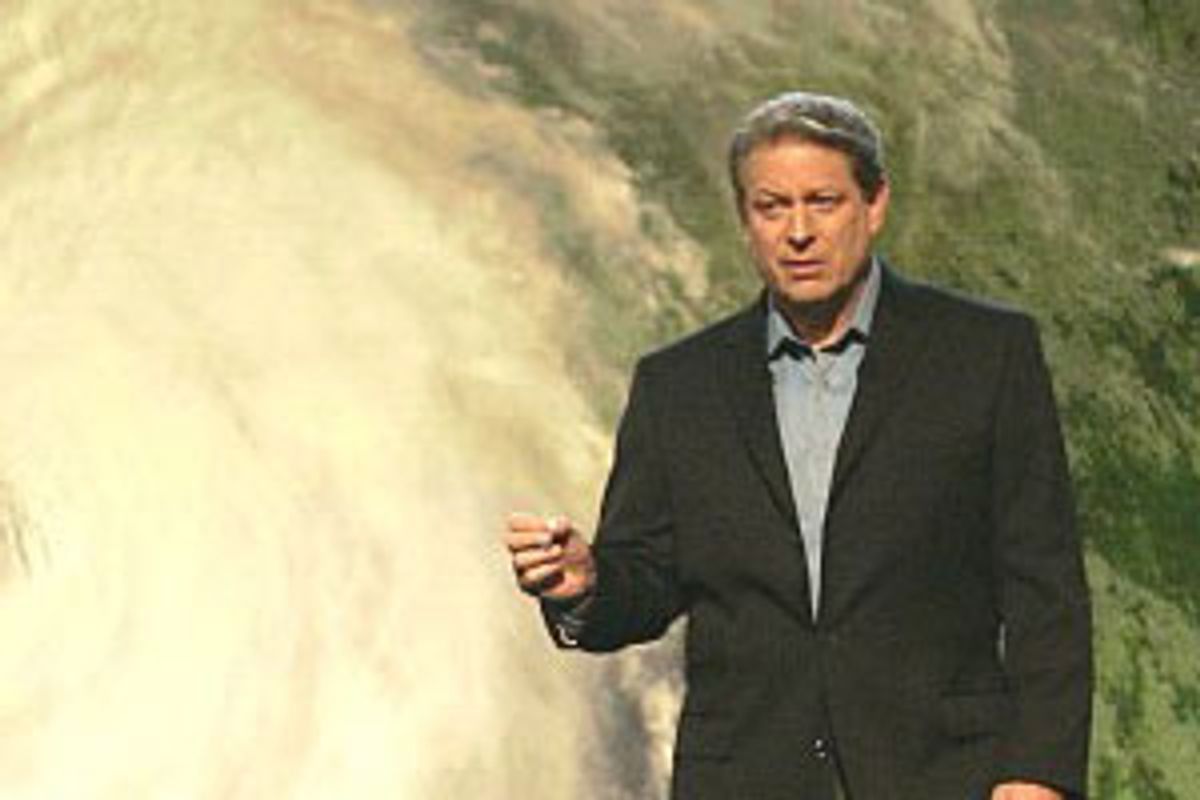 OK, so no one's going to be surprised that Al Gore is sincere and earnest, or that he's well informed about the scientific mechanisms behind global warming. But viewers of "An Inconvenient Truth," the new documentary about Gore's personal crusade to educate the world about its warmer future -- especially those of us who declined to vote for him in 2000 -- may be surprised by the man's soulfulness, sense of humor and professorial charisma.

"An Inconvenient Truth" is directed by Davis Guggenheim, a longtime TV director and the producer of HBO's fine western series "Deadwood." His film was received warmly here at Cannes, where it premiered last weekend, but the real honors went to Gore himself, who (like his former boss) is understood in much of Europe as representing a completely different America from that of the Bush-Cheney administration.

European critics have wondered whether Guggenheim's film did enough to explicate Gore the man, but this may reflect a misunderstanding of American politics in general and the former vice president in particular. Guggenheim spent many months with Gore and interviewed him repeatedly, while traveling around the world with Gore's wonky but highly effective lecture-demonstration on global warming. More than anything I've ever seen or read about Gore, "An Inconvenient Truth" brings this notoriously awkward politician into focus as a human being, both warm and guarded, intellectually curious but not especially introspective. Guggenheim gets Gore, for instance, to discuss the two central emotional events in his life: his sister's death from lung cancer, and the near-death of his son, who was run down by a car, at age 6, in 1989. In both instances, it's clear that Gore is being as emotionally open as he can, and that behind his stilted, almost clichéd language lies a universe of painful meaning. His sister's death turned him into a fervent campaigner against Big Tobacco, and his son's accident, he says, made him determined to focus his work on the damaged planet we are leaving for future generations. The fact that Gore simply isn't capable of speaking in the canned, confessional Oprah-isms of our culture -- the sort of thing that comes as second nature to Bill Clinton -- only made me like him better.

In his interviews with the European press, Gore insisted that he wasn't "a candidate for anything," and came close to declaring that his political career was over. No one in the U.S. is likely to take these statements at face value, or at least not yet, and one could certainly read "An Inconvenient Truth" as an audition tape for a grand political comeback. At the beginning of his lectures, he bounds onto the stage looking relaxed, in a jacket but no tie, and introduces himself: "My name is Al Gore. I used to be the next president of the United States."

After the inevitable laughter, hooting and applause have died down, he says dryly, "I don't find that especially amusing." Clearly, he doesn't. Of his historical role as the first presidential candidate since Grover Cleveland in 1888 to win the popular vote and lose the election, Gore only says, "That was a big blow." Guggenheim seems to see the 2000 election as the third, and perhaps most decisive, of Gore's life-changing personal trials.

Based on the evidence found here I'm at least half-convinced that Gore won't run for president in 2008 or any other year. Guggenheim's efforts to graft a narrative arc onto this episodic and mostly static documentary are only partly successful, but what we see here is a man who seems to have walked away from the inevitable compromises and insider horse-trading of politics in order to deliver a clearer, purer message.

Part of me hopes I'm wrong about this, because the lesson Gore preaches on his barnstorming tour is an urgent and necessary one. Yes, his lectures are sometimes dense and wonky affairs, and it'll be easy for people on all sides of the political spectrum to deride this movie. (Hey, babe, wanna catch the flick about Al Gore's slide show?)

But he never minces words, defaults to religious platitudes (startlingly, he never mentions God at all) or offers any quarter to the forces of mendacity and denial who try to claim that there's any serious scientific controversy about global warming or what is causing it. Besides, as slide shows go, Gore's is a damn good one. He's got both amusing mock-educational cartoons in a "Simpsons" style and punch-to-the-gut photographic evidence: the vanished glaciers of Kilimanjaro and Patagonia, the ever-worsening patterns of tropical storms, the likely effects of melting polar ice on low-lying cities around the world.

I'd like to believe that a public figure can speak truth at this level -- including the discourse-rotting fact that politicians of both parties are so stuffed with corporate money that they've preferred to ignore this issue -- while remaining politically viable. But I'm not sure that's possible now, if it ever was. Gore speaks hopefully of a time when America, by far the most wasteful nation in the world and the biggest contributor to global warming, will face this potentially devastating crisis with a little forthright Yankee techno-ingenuity. But that day, he admits, has not come yet and may not come soon.

Despite the dark message he delivers to his audience (gently and delicately, and just once, he suggests that unchecked global warming could destroy life on our planet), Gore is ever the optimist. He believes that minor lifestyle modifications in the Western world, and the political leadership required to apply a whole bunch of money and brainpower, could rapidly bring our greenhouse emissions down to pre-1970 levels. Whether this is true, or whether it would be enough, I have no idea. But you've got to believe in something. If there's no hope at all, there's also no point in listening to this strange, portly man drone on in his slightly put-on Tennessee accent (remember, he was mostly raised in a Washington hotel suite) about rising ocean temperatures and melt rates in central Greenland.

It's difficult to imagine that "An Inconvenient Truth" will change many Americans' views on global warming. Gore's track record as an environmental advocate is well known, and the film is not likely to play widely or well among the Fox News demographic. It may rally those of us who already agree with him to push the issue closer to the top of the national debate, and certainly that's a worthy goal.

Beyond its policy consequences, Guggenheim's film captures Al Gore as a tragicomic but highly sympathetic figure. If he remains a little uncomfortable in his own skin, he has at last escaped the ghost of Bill Clinton and the ludicrous specter of his own "hanging-chad" defeat and become his own man. It has often been observed that Scott Fitzgerald was wrong, and that American lives these days have second and third acts. Whether Gore's current missionary work constitutes his last act as a public citizen, or just an intermission, remains to be seen.