Bush is trying to keep Americans from abandoning his disastrous war by claiming victory is at hand. But even his own generals know that's a lie. 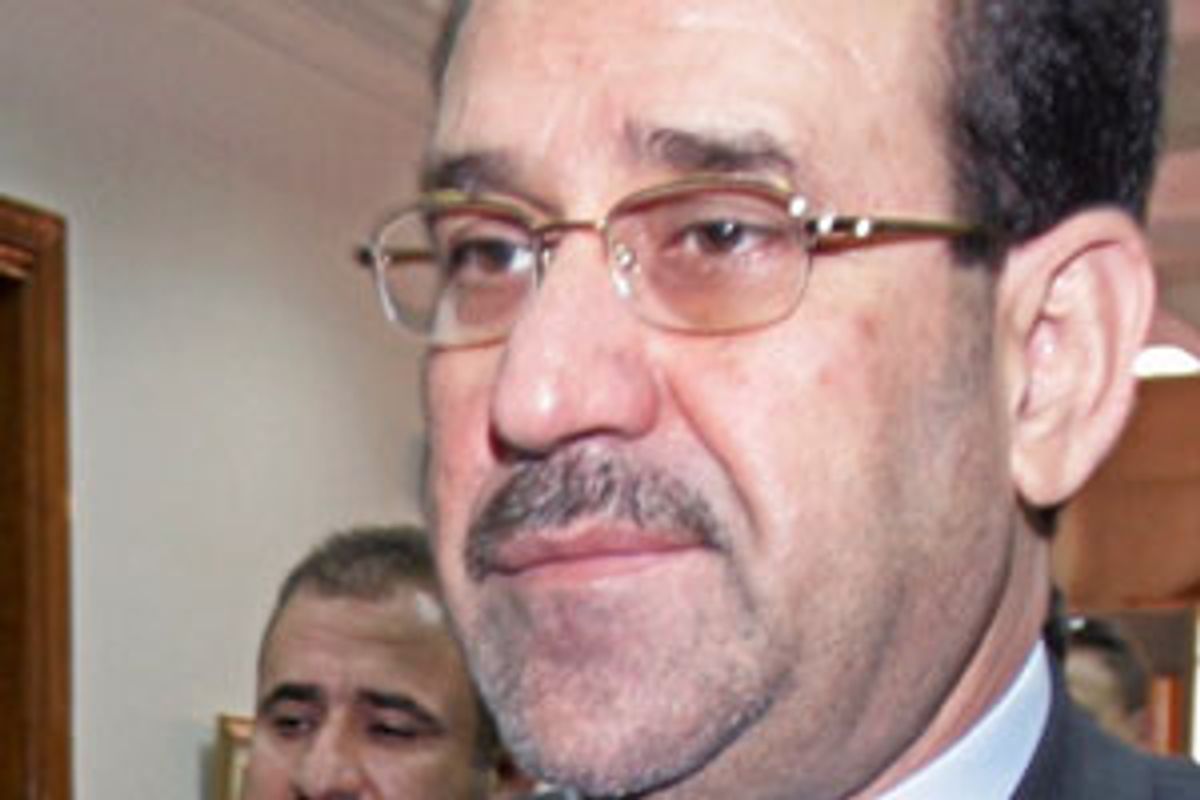 When new Iraqi Prime Minister Nouri Kamel al-Maliki unveiled his government last week, five months after his country's elections, and was unable to appoint ministers of defense and interior, President Bush hailed it as a "turning point." And that was just one month after Maliki's mentor, former Prime Minister Ibrahim al-Jafaari, to whom he had been loyal deputy, installed in the position through the support of radical Shiite cleric Muqtada al-Sadr, was forced to relinquish his office through U.S. pressure.

Bush has been proclaiming Iraq at a turning point for years. "Turning point" is a frequent and recurring talking point, often taken up by the full chorus of the president ("We've reached another great turning point," Nov. 6, 2003; "A turning point will come in less than two weeks," June 18, 2004), vice president ("I think about when we look back and get some historical perspective on this period, I'll believe that the period we were in through 2005 was, in fact, a turning point," Feb. 7, 2006), secretary of state and secretary of defense, and ringing down the echo chamber.

This latest "turning point" reveals an Iraqi state without a social contract, a government without a center, a prime minister without power and an American president without a strategy. Each sectarian group maintains its own militia. Each leader's influence rests on these armed bands, separate armies of tens of thousands of men. The militias have infiltrated and taken over key units of the Iraqi army and local police, using them as death squads, protection rackets and deterrent forces against enemies. Reliable statistics are impossible, but knowledgeable reporters estimate there are about 40 assassinations a day in Iraq. Ethnic cleansing is sweeping the country. From Kirkuk in the north to Baghdad in the middle to Basra in the south, Kurds are driving out Turkmen and Arabs, Shiites are killing Sunnis, and the insurgency enjoys near unanimous support among Sunnis. Contrary to Bush's blanket rhetoric about "terrorists" and constant reference to the insurgency as "the enemy," "foreign fighters are a small component of the insurgency," according to Anthony H. Cordesman of the Center for Strategic and International Studies.

Patrick Cockburn, one of the most accurate and intrepid journalists in Iraq, wrote last week in the Independent of London that "the overall security situation in Iraq is far worse than it was a year ago. Baghdad and central Iraq, where Shia, Sunni and Kurd are mixed, is in the grip of a civil war fought by assassins and death squads. As in Bosnia in 1992, each community is pulling back into enclaves where it is the overwhelming majority and able to defend itself."

While Prime Minister Maliki has declared his intention to enforce an unused militia-demobilization decree proclaimed by the now disbanded Coalition Provisional Authority in 2004, he has made no gesture beyond his statement, and no Iraqi leader has volunteered to be the first test case of demobilization. The New York Times Wednesday cited an American official on the absence of action on this front: "'They need to begin by setting examples,' an American official in Baghdad said of the Iraqi government. 'It is just very noticeable to me that they are not making any examples.' 'None,' the official said. 'Zero.'"

Maliki's inability to fill the posts of minister of defense and minister of the interior reflects the control of the means of violence by factions and sects unwilling to cede it to a central authority. Inside the new government, ministries are being operated as sectarian fiefdoms. The vacuum at the Defense and Interior ministries represents a state of civil war in which no one can be vested with power above all.

In his speech on Monday referring to another "turning point," President Bush twice spoke of "victory." "Victory" is the constant theme he has adopted since last summer, when he hired public opinion specialist Peter Feaver for the National Security Council. Feaver's research claims that the public will sustain military casualties so long as it is persuaded that they will lead to "victory." Bush clings to this P.R. formula to explain, at least to himself, the decline of his political fortunes. "Because we're at war, and war unsettles people," he said in an interview with NBC News last week. To make sense of the disconcerting war, he imposes his familiar framework of us vs. them, "the enemy" who gets "on your TV screen by killing innocent people" against himself.

In his Monday speech, Bush reverted yet again to citing Sept. 11, 2001, as the ultimate justification for the Iraq war. Defiant in the face of terrorists, he repeated whole paragraphs from his 2004 campaign stump speech. "That's just the lessons of September the 11th that I refuse to forget," he said. Stung by the dissent of the former commanders of the U.S. Army in Iraq who have demanded the firing of Secretary of Defense Donald Rumsfeld, Bush reassured the audience that he listens to generals. "I make my mind up based not upon politics or political opinion polls, but based upon what the commanders on the ground tell me is going on," he said.

Yet currently serving U.S. military commanders have been explicitly telling him for more than two years, and making public their view, that there is no purely military solution in Iraq. For example, Gen. John Abizaid, the U.S. commander, said on April 12, 2004: "There is not a purely U.S. military solution to any of the particular problems that we're facing here in Iraq today."

Newsweek reported this week that the U.S. military, in fact, is no longer pursuing a strategy for "victory." "It is consolidating to several 'superbases' in hopes that its continued presence will prevent Iraq from succumbing to full-flown civil war and turning into a failed state. Pentagon strategists admit they have not figured out how to move to superbases, as a way of reducing the pressure -- and casualties -- inflicted on the U.S. Army, while at the same time remaining embedded with Iraqi police and military units. It is a circle no one has squared. But consolidation plans are moving ahead as a default position, and U.S. Ambassador Zalmay Khalilzad has talked frankly about containing the spillover from Iraq's chaos in the region."

Yet Bush continues to declare as his goal (with encouragement from his polling expert on the NSC) the victory that the U.S. military has given up on. And he continues to wave the banner of a military solution against "the enemy," although this "enemy" consists of a Sunni insurgency whose leadership must eventually be conciliated and brought into a federal Iraqi government and of which the criminal Abu Musab al-Zarqawi faction and foreign fighters are a small part.

Bush's belief in a military solution, moreover, renders moot progress on a political solution, which is the only potentially practical approach. His war on the Sunnis simply agitates the process of civil war. The entire burden of progress falls on the U.S. ambassador, whose inherent situation as representative of the occupying power inside the country limits his ability to engage in the international diplomacy that might make his efforts to bring factions together possible. Khalilzad's tentative outreach to Iran, in any case, was shut down by Washington. Secretary of State Condoleezza Rice, for her part, finds herself in Bulgaria, instead of conducting shuttle diplomacy in Amman, Jordan; Riyadh, Saudi Arabia; Ankara, Turkey; and Tehran. The diplomatic vacuum intensifies the power vacuum in Iraq, exciting Bush's flights of magical thinking about victory: I speak, therefore it is.

Bush's chance for a quick victory in Iraq evaporated when the neoconservative fantasy collapsed almost immediately after the invasion. But the "make-believe" of "liberation" that failed to provide basic security set in motion "fratricidal violence," as Nir Rosen writes in his new book, "In the Belly of the Green Bird: The Triumph of the Martyrs in Iraq," based on firsthand observation of the developing insurgency in the vacuum created by U.S. policy.

Indeed, Bush's nominee for director of the CIA, Gen. Michael Hayden, former director of the National Security Agency, in his confirmation hearings, acknowledged the neoconservative manipulation of intelligence to make the case for the Iraq war and disdained it. Asked by Sen. Carl Levin, D-Mich., about the administration's efforts to tie Saddam Hussein to al-Qaida, Hayden replied: "Sir, I -- as director of NSA, we did have a series of inquiries about this potential connection between al Qaeda and the Iraqi government. Yes, sir."

Levin: Now, prior to the war, the undersecretary of defense for policy, Mr. [Douglas] Feith, established an intelligence analysis cell within his policy office at the Defense Department. While the intelligence community was consistently dubious about links between Iraq and al Qaeda, Mr. Feith produced an alternative analysis, asserting that there was a strong connection. Were you comfortable with Mr. Feith's office's approach to intelligence analysis?

Hayden then explained at length the difference between working from the facts and trying to cherry-pick data to support a hypothesis. He made clear that the administration had engaged in the latter. Levin asked: "Now, I believe that you actually placed a disclaimer on NSA reporting relative to any links between al Qaeda and Saddam Hussein. And it was apparently following the repeated inquiries from the Feith office. Would you just tell us what that disclaimer was?" Hayden answered: "Yes, sir. SIGINT neither confirms nor denies -- and let me stop at that point in the sentence so we can stay safely on the side of unclassified. SIGINT neither confirms nor denies, and then we finished the sentence based upon the question that was asked. And then we provided the data, sir." In the language of the agency, in other words, Hayden would not lend support to the Bush's administration's twisting of intelligence.

On May 15, Karl Rove, Bush's chief political advisor, gave a speech revealing one of his ideas about politics. "I think," he said, "there's also a great utility in looking at game changers. What are the things that will allow us to fundamentally change people's behavior in a different way?" Since Sept. 11, Rove has made plain that terrorism and war are the great game changers for Bush.

But while war may be the game changer for Bush's desire to put in place a one-party state, forge a permanent Republican majority, redefine the Constitution and the relationships of the branches of the federal government, and concentrate power in the executive, Bush has only the rhetoric of "victory." He has not stated what would happen the day after "victory." Although a victory parade would be his political nightmare, now the absence of victory is his nightmare. With every proclaimed "turning point," "victory" becomes ever more evanescent. He has no policy for victory and no politics beyond victory.