On Memorial Day and other holidays my extended family gathers to tell stories and to consume large quantities of meat. The bounty reminds us of suffering, and hunger, and the long roads that led from Oklahoma and Florida to here. 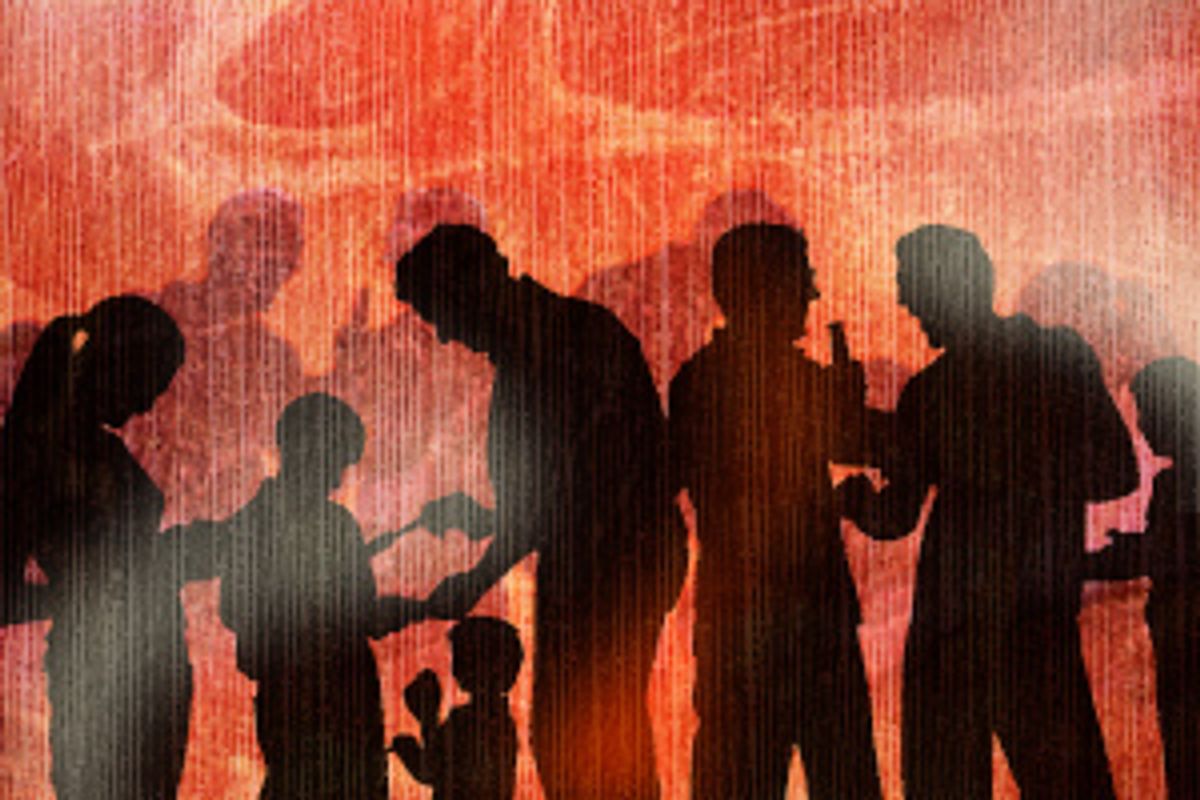 "Seriously, Mom," my oldest daughter said. "Everything we ate had meat in it. I thought there was gonna be meat in the fruit salad."

We were driving the two miles home from another family gathering in my father-in-law's driveway. There had been only close family that day, which meant nearly a hundred of us -- blood relatives, relations by marriage and years of friendship. This Memorial Day, there will be more than a hundred people again. My ex-husband and his brother and his cousin will buy more than a hundred pounds of meat.

For the feast that day, as always, we women brought our signature dishes, and meat was everywhere.

The men barbecued. Pork ribs like huge xylophones on the oil drum grill. When they came off the grill, a cousin cut them apart with a hatchet. Chicken, hot links, hamburgers, hot dogs. We had a fish fry, too, because cousins and friends had caught 30 trout at a local lake.

The side dishes? All my sisters-in-law and female cousins and I were responsible for our specialties. Barbecued beans with sausage, green beans with bacon and salt pork, black-eyed peas with neck bones and salt pork, collards with softened meat floating amid the tangled ribbons of green, and my dirty rice with saffron, black beans and lots of hot-pepper sausage.

There was no meat in the ambrosia or the potato salad, but my three girls were suspicious.

"Practically everyone in our family is worried about weight," my oldest daughter said. "And look at the way we eat."

"We have meat because no one had any in the old days," I explained.

She knows we don't eat like that every day. But on special occasions, meat is our means of displaying survival, and prosperity, and pride.

Our elders came here from Oklahoma and Florida and Louisiana and Mississippi, the great-uncles and cousins and neighbors who survived war and Depression and floods and farms and hate, who made it to Southern California to sit on folding chairs in the driveway and living rooms with a plate of ribs while they tell stories.

While we strip the soft meat from the rib bones, holding them aloft like gleaming instruments, we listen.

My daughters' grandfather and their great-uncles and aunts have often told stories about how they survived on whatever they shot in the fields and woods of Oklahoma. During one Super Bowl Sunday years ago in Inglewood, when the table groaned with pigs feet and spaghetti and chicken wings, the great-uncles all talked about their least favorite of possum, raccoon, rabbit and squirrel. Someone described how the possum had to be parboiled first, before roasting, to take out the gamey taste. And squirrels -- nothing but bones, someone else said. Recently when I was visiting my father-in-law, sitting on his bed while he told stories, he said, "Sometimes I wonder if there were any squirrels left after we got grown and moved to California. We shot so many squirrels the snakes started showing up everywhere."

"Y'all didn't eat snake?" my ex-husband teased him.

My father-in-law shook his head. "We wouldn't eat that. Not snake."

My own father has stories of eternal mutton from his childhood on a sheep ranch in the Rocky Mountains of Colorado, and of parasite-ridden bear meat he ate when someone went hunting, I reminded my daughters. His family migrated to the Echo Park neighborhood of Los Angeles, then to the outlying city of Upland. When I was young, his favorite place to take me was In-N-Out Burger, for a double-double. I could never get my mouth around the hamburger, with its two thick beef patties still steaming, but my father loved to sit at the cement tables near the takeout window and watch me. He'd always finish his double-double quickly, and he often said to me, "When I was a kid, we ate milk-toast for breakfast and beans for dinner." Deprivation was the common theme for most of our ancestors, no matter where they lived.

Relatives my own age have stories of hunger, too, because of circumstance or bad marriage or alcohol. Sitting in my own driveway, our cousins and friends have talked about growing up in Texas, shooting blackbirds from the sky with slingshots and BB guns and roasting them there in the fields, of even shooting pigeons in West Riverside.

This holiday, one cousin who has known hunger handed me slabs of meat glistening with barbecue sauce. I helped pile the ribs and chicken into huge foil pans, some of which we put out for everyone, and three of which we hid in the oven.

People in the neighborhood see us gathering, and they smell free meat, he says, sometimes angrily. This time, I watched when one neighbor my age came up the driveway, all hearty smiles and welcome, and our cousin said loudly, "What you bring? Nothin', like always?"

The smile faded, and then came back wider. The man wanted a plate of food, as he does every holiday. But our cousins are tired of giving meat to everyone, so I was instructed to follow the man inside and make his plate for him. Salads, side dishes, and one rib, one piece of chicken. No more.

"Come up here wanting meat every time, a whole plate of it," our cousin said, loud enough. "Don't know what all that meat costs."

In the car, that night, my oldest daughter said, "And people were mad about that one guy, and you had to make that plate for him."

I explained it again, but this time, I felt that she knew the reasons, and she wanted to hear them as familiar tales of comfort. She had been unnerved by our cousin's vehement protection of the ribs. "Do you understand what the meat means to them? It meant survival. Your dad and all your uncles pay for all that meat every time."

I think of my children and their friends, the generation of chicken nuggets. Chicken meat like sawdust with additives to glue it together. The generation of fruit snacks, molded from liquid, rather than actual apricots and plums, which we and our cousins lived for. The closest thing we had to fruit snacks were the ruby jewels of the pomegranates we stole from our favorite tree down an alley. The generation of pepperoni beef stix and popcorn chicken and thin grainy patties of whatever is truly in fast-food hamburgers.

I think of the way my girls hold the rib bones in their fingers and chew and look and listen. I watch their father's cousins pile more on their plates. They know, we all know, what the children are ingesting with the meat.

I said to my daughter, knowing she would smell the barbecue sauce under her fingernails the whole night, "Do you understand all those stories people tell? Like Mr. G?"

Mr. G is close friends with my father-in-law; I have known him most of my life, but I was surprised when one day, he sat on my porch after working on our roof, and told me about his pig.

He was born in north Florida, and before his birth, his own father died in an accident in the pine forests where turpentine was harvested. The family was starving, and though he was the youngest, he was the most fierce. When he was 7, he took a hammer and walked to a neighboring farm, where he killed a pig and dragged it back to his mother's house. "I was so hungry, and I was tired of waiting for me some meat," he told me.

He has been a roofer for many years, owns three houses, drives a Navigator, and sent two children to college. But he still remembers that pig, and he told me about it for a reason.

He smelled ham in my kitchen, from the holidays, and he teased my daughters. "You eat you some ham?" he used to say to them. They were afraid of him, his red-brown face burnt from years of working in the Southern California sun, and his eyes a startling turquoise.

But he and the other elders figure our kids need to hear about the pig, and the hunger, so they'll understand meat, and need, and why we gather in the driveways and living rooms to cook flesh and share it and sit together, alive and prosperous and watchful.