A few final words about the cheap wine and sexy uniforms at Cannes -- and a look at summer movies ahead. 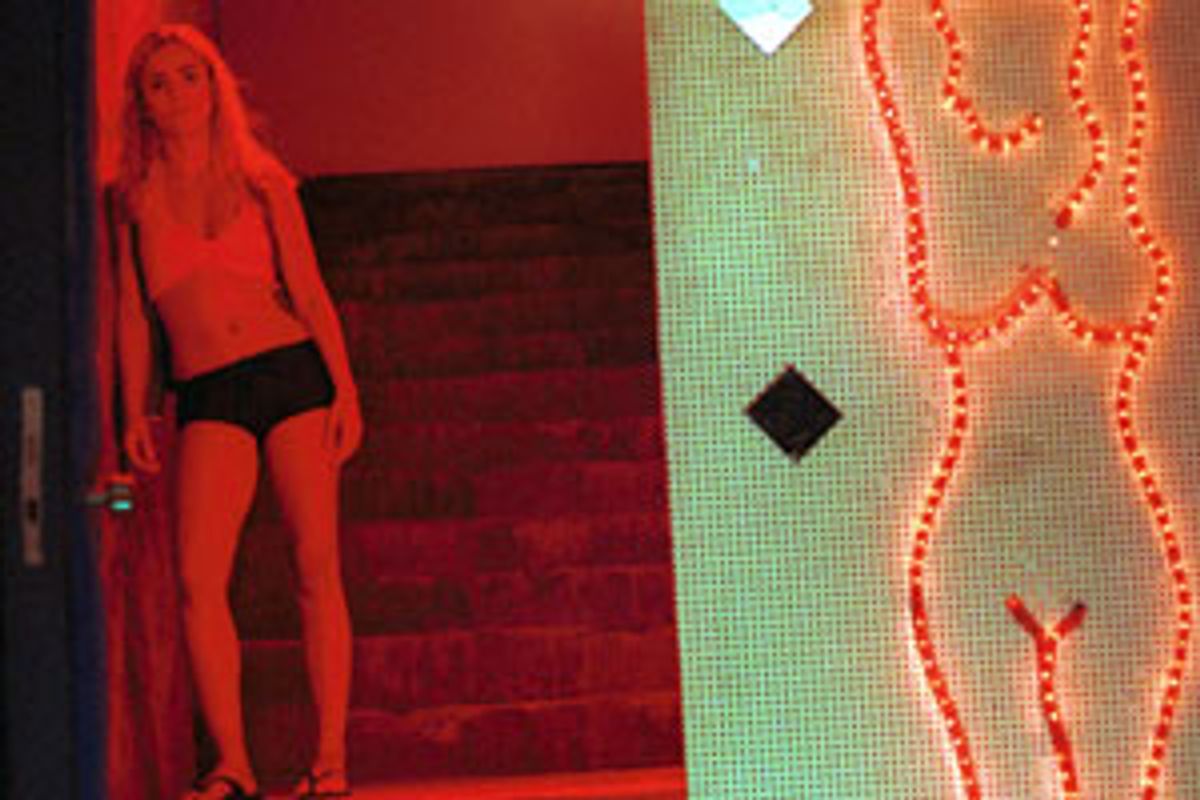 Nobody, including me, wants me to write any more about Cannes, or about the harsh ordeals involved in spending two weeks on the Côte d'Azur on someone else's dime. Poor me! I had to work so hard! And sometimes I forgot to put on sunscreen! Ow! And the really, really, really cheap wine, the kind that comes out of a steel barrel with a garden hose attached to it and costs about $1.50 a bottle? Well, it isn't that great. But I toughened up and drank it anyway.

I have two parting shots before I sober up and move on, and then it's not a peep about Cannes for the next 11 months, I promise. The first is that everyone complains about the ugliness of the Palais des Festivals, the postmodern monstrosity on the beachfront where the festival's main screenings are held. As everyone who's ever been there knows, locals call it "Le Bunker," which is amusing, I guess. But the Palais doesn't look anything like a bunker. It's enormous and overwhelming; it looks as if it used to be underground and has burst through the pavement and sprouted its disturbing protrusions and illogical angles in all directions.

Despite its innocent-seeming surroundings, with their palm trees, sandwich stands and Hugo Boss boutiques, the Palais des Festivals is -- as I have gradually come to understand -- not merely an example of postwar European architecture at its most bogus. It is in fact a tribute to H.P. Lovecraft's "nightmare corpse-city of R'lyeh," sunk deep beneath the Pacific Ocean, whose geometry is "abnormal, non-Euclidean, and loathsomely redolent of spheres and dimensions apart from ours." The sleeping hulk in the Palais' deepest, slimiest vault, then, is not a hung-over Gérard Depardieu, but something far worse: the dread god Cthulhu, awaiting the cosmic realignment that will enable him to rise, reconquer the earth and enslave us all!

Before that happens, though, I'd like to understand the endless strata of uniforms worn by the Cannes staff. I think I need input from a fashion specialist, or a shrink, or my old San Francisco pal Susie Bright. Are the surly security guards in sky-blue tuxedo jackets somehow different from the ones in black tuxedo jackets? Are the hip-hugging pantsuits in delirious '70s zigzag patterns, worn by the women who pass around the microphones at press conferences, meant to distract us from asking embarrassing or difficult questions? Why are the tiny white short-shorts worn by the girls who serve coffee in the press lounge so much less sexy than the severe black sheath dresses worn by the ones who prod you with a metal detector on your way into the main theater? These are the things that haunted me at night, when I ran out of steel-barrel wine.

At last, a winner -- in the competition we all forgot!
Things have been so busy in this column that I never awarded a winner in the contest to find the strangest and unlikeliest art-house theater anywhere in North America. You guys have gradually lost interest and quit sending suggestions, but I'm stuffed with croissants and runny cheese, and feeling patriotic. So I've dug up all the old entries, and here goes.

Jury Prize (aka third place): Let's split this between the Guild Cinema in Albuquerque, N.M., the Parkway Theater, on the still-funky east side of Oakland, Calif., and the Bookshelf Cafe in Guelph, Ont. Readers Jubilee Barton, Paige Brown and Ann Bilanski, check in for your prizes, please. (I'm quite serious about this.)

Grand Prize (runner-up): Another close call, and I hate breaking ties, so the honors go to the venerable Little Art Theatre in Yellow Springs, Ohio (whose struggles have previously been discussed herein), and the much-beloved Ragtag Cinemacafé of Columbia, Mo., whose mascot appears to be a winged gerbil. (Come on down, Daniel Friedman and Julie Harding! Your gift bags are waiting in the wings.)

Grand Pompadour: I need to hire some handsome French actor with a passing resemblance to the young Jean-Paul Belmondo, the way they do at Cannes, to stand there looking elegant and ask me, "Mr. Jury President, who has won the Grand Pompadour?" Well, I always root for the underdog, so despite all the more glamorous entries, the winner, beyond any doubt, is the Town Theatre of Highland, Ind. Congratulations and huzzah!

The Town has been showing independent and foreign films to the people of Highland since 1946 and I'm sorry, nobody's going to convince me that Highland (about an hour outside Chicago) is a major cultural center in any other way. "Thank You for Smoking" is playing this week, and "Friends With Money" next week; tickets are $5 and all shows are at 8 P.M., 5 o'clock on Sundays. Here's what clinched it, though: Halfway through the movie, the Town has an intermission, and serves free cake and coffee in the lobby. (The cake is made from scratch at Almira's Pastry Shop, which is part of the Strack & Van Til grocery chain. Not sure about the coffee.)

Is this a terrible, sentimental decision? Well, that's how some people felt about "The Wind That Shakes the Barley" winning the big prize at that place in France I said I would shut up about. Reader Jonathan Kauffman of San Francisco (whose parents are regulars at the Town), please check in and we'll customize a special package of prizes. I'll throw in lunch at a beachfront restaurant in you-know-where next year. If you pay your own airfare. And bring a slice of Almira's cake.

Navigating the indie doldrums: A summer forecast
If you're still reading, you've figured out that I'm tremendously jet-lagged after returning from Hmm-hmm-hmm and don't have any new movies to write about this week. Summer is upon us, at least as movie people define it, and after a deluge of exciting indies in March, April and May, that usually means a dry spell while the studios trot out their nightmarish Frankenstein contraptions one after the other. Still, if you pay close attention and search the crevasses between Pixar's "Cars" and Adam Sandler's "Click" and "Superman Returns" and whatever the hell else, this summer looks like it might be better than most.

June will kick off with Robert Altman's delightful film version of "Prairie Home Companion" and the French action flick "District B13," a definite potential cult hit. (We'll tackle those next week.) "The Heart of the Game," a Miramax documentary about a high school girls basketball coach and his star player, has tremendous word-of-mouth buzz going. Michael Winterbottom and Mat Whitecross' docudrama "The Road to Guantánamo," about three British men detained in Afghanistan and sent to the United States' notorious prison in Cuba, is an explosive look at the war on terrorism from the other side that's sure to spark furious debate.

French director André Téchiné brings Catherine Deneuve and Gérard Depardieu together for the first time in 25 years for "Changing Times," another June release. In the long-delayed "Wassup Rockers," the notorious Larry Clark turns his youth-culture obsession on Latino kids in L.A. who favor hardcore music and skateboarding instead of low-riders and baggy clothes. Paul Dinello's "Strangers With Candy" is, yes, a prequel to the culty Comedy Central series, starring Amy Sedaris and Stephen Colbert, with cameos by seemingly every celebrity in the known world. The month ends with the Sundance hit "Leonard Cohen: I'm Your Man," about the hipster poet and troubadour, and the memorable documentary "The Blood of My Brother," the first film to depict Iraq's Shiite insurgency from the inside.

July is generally a wasteland for decent movies, but some small distributors have started releasing noteworthy foreign films in the height of summer, perhaps reasoning they can't do any worse then than in colder weather. "Heading South," the sexy new outing from Laurent Cantet ("Time Out"); Patrice Chéreau's reportedly searing marriage drama "Gabrielle," starring Isabelle Huppert and Pascal Greggory; and Brazilian director Andrucha Waddington's international festival hit "House of Sand" will all reach theaters that month.

August, as usual, is the dumping ground for movies not splashy enough for early summer and not serious enough for the fall. (Please note, prospective fans of "Snakes on a Plane," or anyone masochistic enough to pay money for Oliver Stone's "World Trade Center." Both are August releases.) But sometimes it's just when the business schedules movies that are too weird for any other month. I imagine that's the story with "Eternal Sunshine of the Spotless Mind" director Michel Gondry's "The Science of Sleep" (starring Gael García Bernal and Charlotte Gainsbourg).

Along the way, there should also be some hidden surprises. I hear good things about the documentary "The Photographer, His Wife, Her Lover" (about the art-world scandal surrounding photographer O. Winston Link), and Sundance viewers and jury members alike went nuts for the intimate East L.A. drama "Quinceañera." Claude Chabrol's thriller "The Bridesmaid" (a Ruth Rendell adaptation) is supposedly one of his best films in years, and Japanese samurai-movie master Yoji Yamada's new "Hidden Blade" is -- well, I don't know if it's any good or not, but it's Yamada's 78th film. If that's not worth saluting with a piece of Almira's cake and a glass of steel-barrel vin rouge, then nothing is.