Cartoonist Alison Bechdel, of "Dykes to Watch Out For" fame, has created a heart-stopping graphic memoir revealing her family secrets. 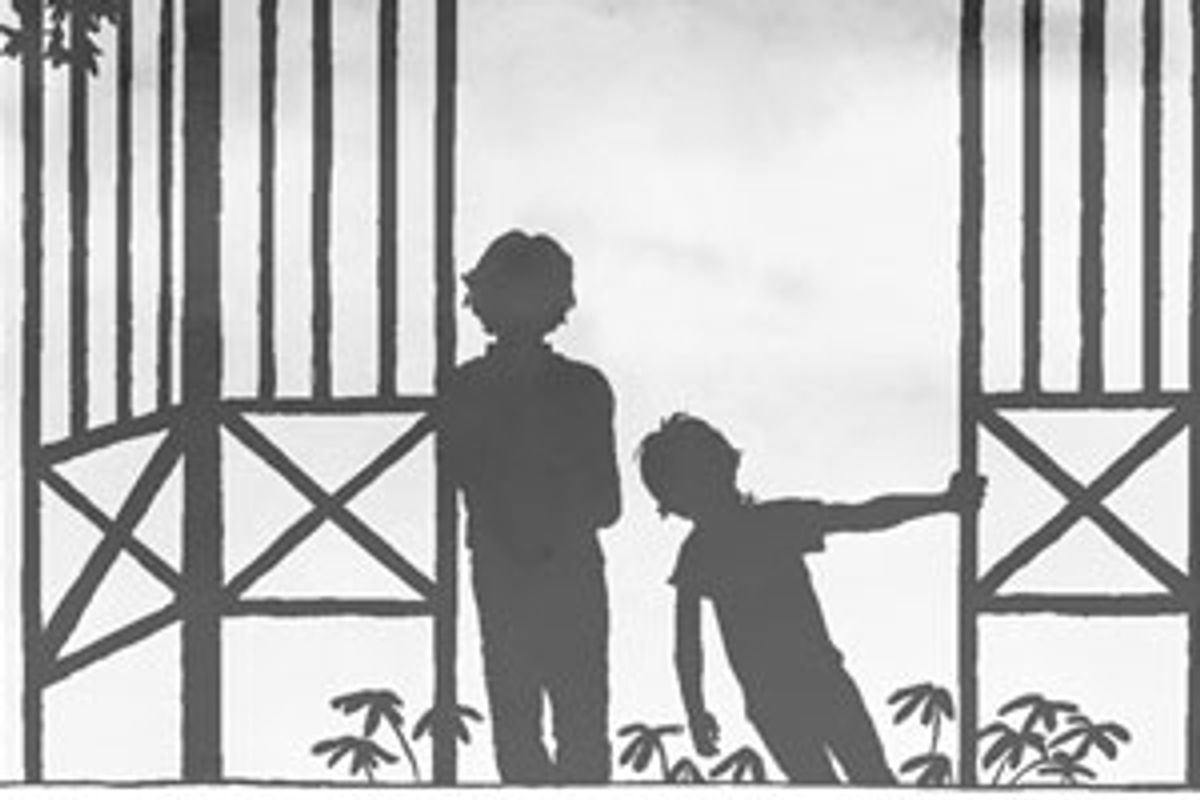 Midway through "Fun Home," Alison Bechdel's riveting memoir of her family's secrets and love letter to her late, horrifically flawed father, she shows us the earliest entries in the diary she's kept since the age of 10. In her first few months of keeping a diary, the young Bechdel started to undergo what she calls "a sort of epistemological crisis" -- after every assertion of fact, she'd write "I think" in tiny letters. "I think" was replaced first by a scribble, then by a little symbol that she eventually drew over individual words, and later over entire diary entries, blotting out her own experience with the sign of her uncertainty.

Good thing she got over it. "Fun Home" is a beautiful, assured piece of work, by far the best thing Bechdel has done in over two decades as a cartoonist. Her language and drawings are impressively sensitive to the details of her physical experience and to the trickier folds of her own self-consciousness; she dives over and over into the cloudy waters of her past, swimming deeper every time. A compulsive self-documenter, she nonetheless glossed over or omitted some of her life's crucial details as they were happening, and now she's gone back to reconstruct them. Unlike most memoirists, Bechdel doesn't present her family history chronologically. Instead, she spirals around its central incidents repeatedly, approaching them from different angles. Early on in "Fun Home," she lays out most of its narrative landmarks: that her father, Bruce Bechdel, a bookish, reserved man who sometimes exploded into fury, ran the local funeral home (whose family nickname provides the book's title), taught high school English, and spent all his free time restoring the family's 1867 house to its high Gothic-revival glory; that he died when she was 19 in an accident she suspects was a suicide; that he turned out to have been having sex with teenage boys for years; that, shortly before her father's death, Bechdel herself had come out to her parents as a lesbian.

This is heavy stuff, in theory, but what Bechdel makes of it is luminous and playful. The book's subtitle is "a family tragicomic," and 23 years of producing her biweekly comic strip "Dykes to Watch Out For" have polished the poker-faced hilarity of her tone to a burnished gleam. She draws herself and her family and friends as loose caricatures with studiously observed clothing and haircuts and physical settings, and gives the whole thing depth with a watercolor-ish green wash over her ink lines. The wobble in her line seems like a deliberate gesture to soften the hyper-controlled precision of her drawings, as well as a nod to her first influence, Robert Crumb. Her images flutter forward and backward in time, playing thematically off the narrative captions much more often than they illustrate them. The text is full of double meanings, alliteration and wryly specific $20 words. Historical restoration, she writes, was her father's "passion in every sense of the word. Libidinal. Manic. Martyred." (This is accompanied by a drawing of the elder Bechdel, in cutoffs and loafers, carrying a huge, salvaged Victorian wooden post like a cross.)

Bechdel's favorite breed of joke, here as in "Dykes to Watch Out For," comes from unexpected connections. On the story's first page, she shows her childhood self playing airplane with her father as he lies on a Persian carpet and lifts her with his feet, then notes that "in the circus, acrobatics where one person lies on the floor balancing another are called 'Icarian games.'" That kicks off a series of Icarus-and-Daedalus metaphors: Her father, she says, "was an alchemist of appearance, a savant of surface, a Daedalus of decor." The chapter is called "Old Father, Old Artificer" -- a phrase from James Joyce's "A Portrait of the Artist as a Young Man," whose protagonist is Stephen Dedalus. (When he learned Bechdel was reading "Portrait" for college, her father told her, "Good. You damn well better identify with every page.") A later scene riffs off of 15-year-old Alison's trip with her father to New York City's West Village, which suddenly looked very gay to her: "It was like the moment the manicurist in the Palmolive commercial informs her client, 'You're soaking in it.' The suspect element is revealed to be not just benign, but beneficial, and in fact, all-pervasive."

In its best moments, "Fun Home" is as airily, intricately choreographed as a grand farce. One chapter, "The Ideal Husband," is mostly concerned with the fallout of an incident in which Bruce Bechdel got into legal trouble for buying a beer for a teenage boy -- there may have been more going on, but that was all that ended up on the police report, whose typewritten text his daughter copies by hand. The same weekend, the Bechdel children were staying at the home of family friends ("It was hard to remember to address both parents as 'Dr. Gryglewicz'"). In one image, Alison and her friend Beth, playing police, pull imaginary guns on their siblings: "Spread 'em, punks!" Hanging on the wall in the background, there's a picture of a woman lying naked on a bed with her legs spread, captioned "One of Dr. Gryglewicz's many interesting paintings of Dr. Gryglewicz."

The chapter's central drama is surrounded by threads about Bechdel's mother performing in "The Importance of Being Earnest" -- a panel in which Helen Bechdel is practicing her lines, saying, "An engagement should come on a young girl as a surprise," is accompanied by a caption noting that Alison had just gotten her first period -- as well as the arrival of 17-year cicadas, Watergate, and her discovery of both masturbation and obfuscating euphemisms (this was the historical moment when kids learned to call each other "expletive deleted"). It's played for nervous giggles, but it all works in concert to evoke the way the adult world's sexuality and secrecy crept into Bechdel's consciousness over the course of a few months.

It also suggests her drive to understand the larger landscape on which her own experience is only a single window. A chapter that's ostensibly about Bruce Bechdel's funeral also encompasses a discussion of the books he was reading shortly before his death, his fixation with obelisks, Albert Camus' "The Myth of Sisyphus" and accidental death, Alison's teenage experience of seeing a naked cadaver on a prep table, her early childhood confusing of the family in Charles Addams' cartoons for her own, and much more. An artist from a very early age, she's got a deep and intuitive understanding of images and their subtext. In one scene, she draws her hands holding two photographs (all of the book's photos are rendered with meticulous crosshatching, to contrast them with the clear-line style she uses for everything else). One is a picture of herself, snapped by a girlfriend; the other is a picture of her father at 22. "Was the boy who took it his lover?" she wonders. "The exterior setting, the pained grin, the flexible wrists, even the angle of shadow falling across our faces -- it's about as close as a translation can get."

The photograph that comes in for the closest analysis, though, is one she found in a box from 1969 -- a dimly lit picture her father took of the family's 17-year-old baby sitter, reclining on a hotel bed in his underwear. Was the Bechdels' impeccably and perpetually restored home a sham, Bechdel asks? It was and it wasn't: "We really were a family, and we really did live in those period rooms." Bit by bit, before and after his death, the truth about Bruce Bechdel emerged, and if we don't learn the details in the same order she did, she still communicates the sense of gradual, inexorable revelation.

But "Fun Home" isn't really about Bechdel's slow discovery of her father's hidden life; it's about her investigation of her own memories of that discovery, and the great works of literature through which she's come to understand them. "My parents are most real to me in fictional terms," she writes: she compares them to characters from Henry James, F. Scott Fitzgerald, Oscar Wilde, Marcel Proust and, in the final chapter, James Joyce's "Ulysses," which she read around the same time she was coming out, and whose conversation between Stephen and Bloom is echoed by the only real conversation she and her father ever had about their homosexuality.

What ultimately brought her and her father together, in fact, were books. The Bechdels' library was the emotional center of their home, and Alison contextualizes most of her experiences by thinking of them in terms of literature -- she even realized she was gay not from an attraction to a specific person, but from looking at a book, "Word Is Out: Stories of Some of Our Lives." Colette's autobiography, Kate Millett's "Flying" and especially "Ulysses" provided the basis for Bechdel's final discussions and correspondence with her father, and pointed her toward some kind of understanding of his death. More than that, though, her family brought her up to live the life of the mind, to understand that observing and refining the wrenching losses of existence through the filter of art and especially writing could turn them into something meaningful and even redemptive. Literature didn't save her father, but Bechdel's cartooning has transmuted his life and death into an extraordinary book, a memorial loving enough to illuminate and even make light of their shared story's most heartbreaking depths.