Not just Bush-haters in bathrobes

Forget starry-eyed idealism. The liberal bloggers gathered in Vegas for YearlyKos want to win any way they can. 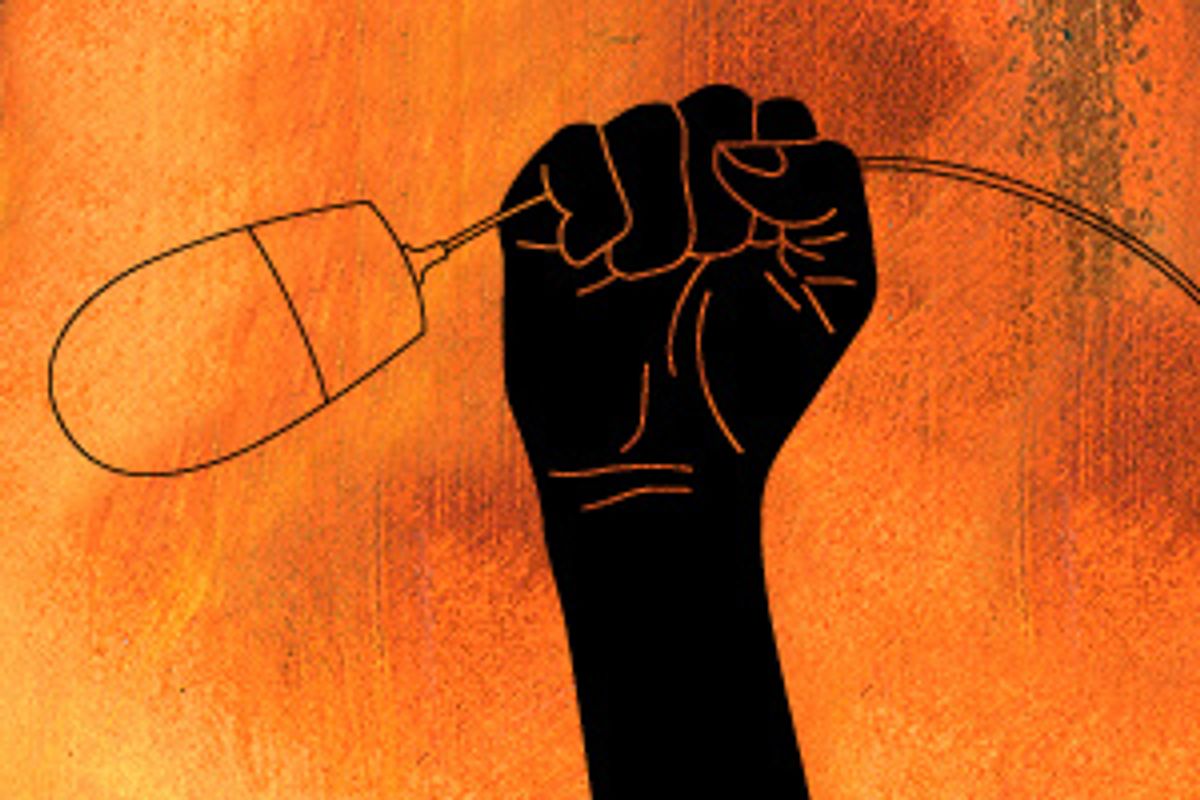 The first thing you notice about a liberal blogger convention is that everyone is wearing pants. Despite the popular perception of online activists, these are not the angry, unkempt youth of the Internet left, ranting for impeachment from their bedrooms and squinting in the cold glare of "offline" reality. Most of the attendees at YearlyKos, a four-day gathering of about 1,000 bloggers and activists in Las Vegas, appear to be over 40, the sort of crowd you would see gathered at a PTA meeting, not at a World Bank protest.

"We are liberal, moderate and conservative Democrats," announced Markos Moulitsas Zuniga, aka Kos, of DailyKos.com, the chipmunk-faced leader of liberal blogs, who keynoted the convention Thursday night. "Popular movements are rarely so practical."

Hours earlier, at an afternoon breakout session for West Coast bloggers, Moulitsas' pragmatic description had been confirmed. More than a hundred gathered to strategize for the 2006 election in a conversation that veered repeatedly to cover the most cynical, non-ideological concerns. There was discussion about the need to recruit "law and order" Democrats to run against illegal immigration in Southern California. "You have to be individual to the district," said one blogger. There was apparent agreement about the importance of allowing Democrats to embrace gun ownership, so as not to rile the National Rifle Association. By a show of hands, the group voted down a proposal to push for government subsidies of "nationwide broadband" because it might raise suburban soccer mom fears of Internet predators preying on their children. One blogger even suggested rebranding Democrats in the slogan of libertarian conservatives, as "the party of personal liberty."

At every session, every panel, and every hallway conversation, the underlying motivator had less to do with ideology than victory. These political neophytes and outsiders have passion and a high-tech soapbox to use it. They have come to Vegas to try to prove that they matter. Over the coming days, four possible presidential contenders will come to the decaying Riviera Hotel to woo the online multitudes -- Gen. Wesley Clark, former Virginia Gov. Mark Warner, Iowa Gov. Tom Vilsack and New Mexico Gov. Bill Richardson. (Sen. Russ Feingold is attending a Democratic conference in Wisconsin.) "I think there is the case that somebody missed it by not being here," said Joe Trippi, the former campaign manager to Howard Dean, referring to the missing White House aspirants like Sens. Hillary Clinton and Evan Bayh. "Will people look back on this and say they skipped Iowa or they just skipped the winter DNC meeting?"

To date, of course, liberal bloggers do not have much to show for themselves in terms of victory, with the exception of Howard Dean's election as Democratic chairman. Candidates endorsed by the so-called netroots regularly fail to best other Democrats in primaries or Republicans in the general election. (In 2004, Moulitsas handpicked 13 candidates, including several long shots, without a single victory.) But the medium is still in its adolescence. Blog traffic at the local level continues to grow, as does traffic at social networking sites like MySpace and Facebook.

At the top, the Democratic blog movement is overseen by a small, and increasingly powerful, brain trust. They are organized, as one blogger explained to me, like a royal court. Moulitsas, as King Kos, sits in the throne overseeing the largest political site on the Internet, with substantial power to direct the conversation and raise money. His chief advisor is Jerome Armstrong, who pioneered liberal blogging and now works on the undeclared Mark Warner presidential campaign. Beneath them sit a set of ministers, most of them connected to Armstrong's Web site MyDD or DailyKos. Chris Bowers, a gangly longhair from Pennsylvania, plays the role of policy advisor, having mastered the wonky details of polling and district strategy. Matt Stoller, an aggressive preppie, plays the role of Washington enforcer, leading Internet-based campaigns into the halls of the Capitol. Beyond the inner court, there is a loosely held republic of Web sites that command hundreds of thousands of readers a day, even in off-cycle election years.

As always, power attracts attention from the Washington press corps. Thursday afternoon's caucus meeting of MyDD readers attracted two reporters from the New York Times and a standing-room-only crowd. At least two congressional candidates had also come to beg the support of Bowers and Stoller. "What is the process for being a netroots candidate?" asked John Laesch, who plans to run against House Speaker Dennis Hastert in the 14th District of Illinois, which is considered safely Republican by Congressional Quarterly. In this crowd, "netroots candidate" is a term of art, an official designation by Moulitsas, Bowers, Stoller and one other blogger, who works at Swing State Project. Once granted, the label entitles the candidates to online fundraising appeals and Internet bragging rights. Bowers, who spoke in front of a projection of the MyDD Web site showing live blogging from the room, explained the three-step process, which began with local blog support and ended with the need for "all of us [to] agree." By "us," he meant that the "netroots" came down to the opinions of four people.

Several hours later, as working people went to bed and the city came alive, hundreds of conventioneers caught taxi cabs over to the Hard Rock Hotel, where Clark had rented out an open bar for after-hours blogger libation. Just as the pre-paid alcohol began to run out, Clark got up on a stool to address the crowd. "You are a force that could," Clark yelled out across bar, which was carpeted in a leopard skin print. "You are a group that might. You might be able to change America." When his speech was over, the bloggers continued to drink. Come morning, they would be back at their keyboards, eagerly trying to shape the future with a wi-fi connection and a will to win.