In Las Vegas, Democrats court the netroots as if it were the AFL-CIO. 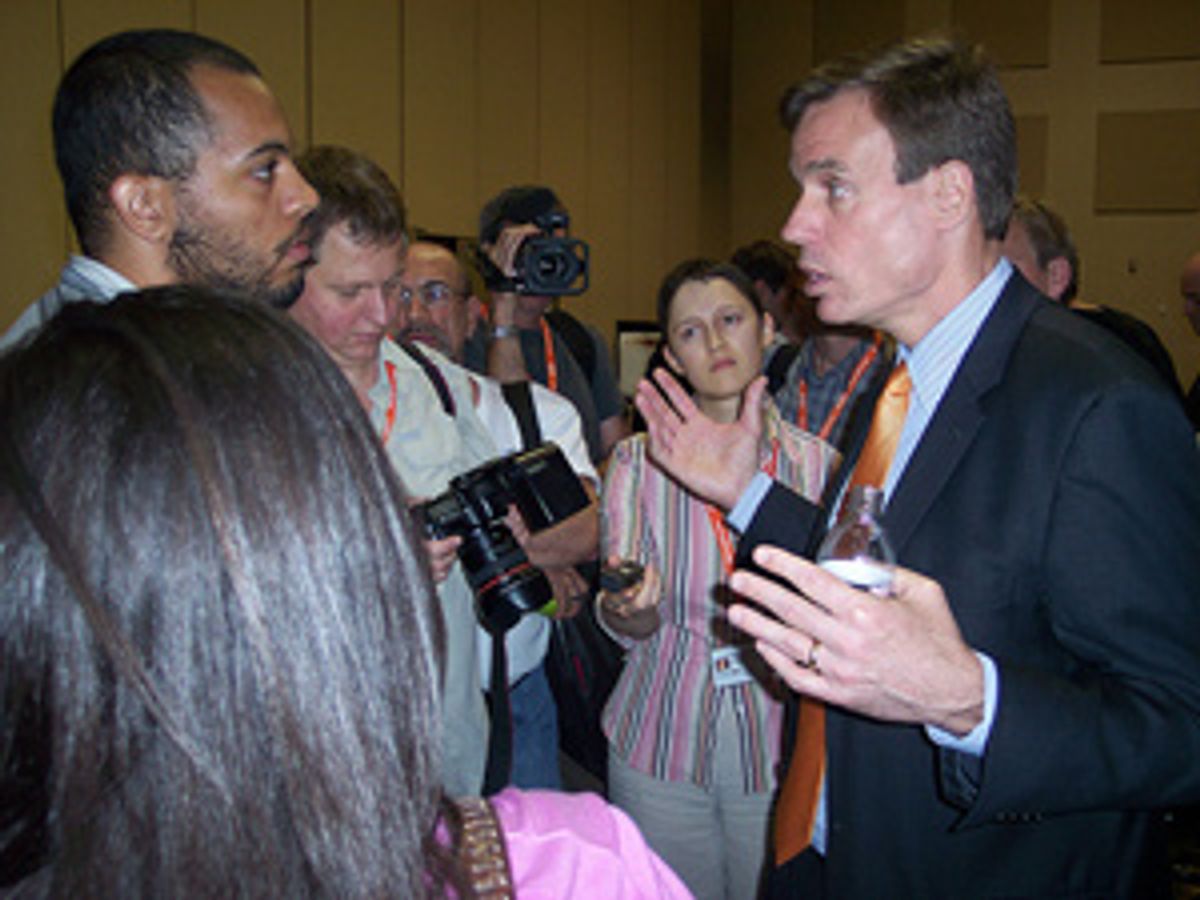 If the 2008 Democratic presidential primaries were held tomorrow, former Virginia Gov. Mark Warner would easily win the contest for the best party planner. To date, no other candidate has rented an Elvis impersonator to perform for supporters in a circular viewing station 1,000 feet above the Vegas strip. And no other candidate has tried to ply voters with the deadly trifecta of a vodka-chilling ice sculpture, a chocolate fondue waterfall, and free roller-coaster rides.

But there was Warner on Friday night, looking, as one blogger commented, like a cross between John Kennedy and Richie Cunningham of "Happy Days" as he danced between two Blues Brothers' impersonators at the Stratosphere Hotel and Casino. At a reported cost of around $50,000, Warner had rented out the highest bar in Vegas to entertain the nearly 1,000 bloggers and online activists who were in town for YearlyKos, a conference sponsored by the largest online community of Democrats in the country.

Warner was not the only potential presidential hopeful to glad-hand at YearlyKos. Retired Gen. Wesley Clark, a 2004 White House contender, threw an after-hours party Thursday night in a packed bar at the Hard Rock Hotel, though the open bar only included a limited supply of bottled beer and cheap red wine. New Mexico Gov. Bill Richardson showed up Friday morning with breakfast pastries, along with praise for the blogging community and his endorsement of Democrats becoming "the party of [outer] space." Iowa Gov. Tom Vilsack appeared for an education panel before meeting privately with a small preselected group of bloggers, without offering so much as a stick of gum.

But no one could compete with Warner, who chose to treat the emerging and ill-defined world of liberal blogging like a major union or corporate trade group. He brought nearly a dozen staffers, including his political action committee's five-person "Internet team," and a camera crew to follow his movements throughout the Riviera Hotel, for later online broadcast. When conventioneers checked in, they were given a goodie bag with a laminated invitation to the Warner party conspicuously swinging from the handle. At Saturday's lunch, where Warner showed his standard slick biographical video and delivered his entrepreneur-turned-Virginia-governor stump speech, each attendee got a black T-shirt, emblazoned with Warner's digitally enhanced mug and the words "YearlyKos," as if he had sponsored the event.

"You know when I look around this room I have rarely seen such energy, such optimism, such hope in one place," Warner told the crowd. "And I am not just talking about those of you I saw at the blackjack table at the Stratosphere." His stump speech was light on specific proposals, and heavy with applause lines about the divisiveness of the Bush administration and the need for Democrats to take back the country.

When he was done, about two-thirds of the audience gave him a standing ovation, many of them clearly impressed with his biography as a red state Democrat and high-tech executive. But dissension was also not far under the surface. Minutes after Warner stepped outside of the convention hall to answer questions from reporters and bloggers, Edward Anderson, a Connecticut blogger whose screen name is DeanFan84, confronted him with a broad-based concern. "Do you understand that a lot of us in the grass roots feel that the money could have been spent better?" Anderson asked the former governor, referring to the Friday night Warner party at the Stratosphere. "We don't want to join the consultant class. I don't want our guys getting used to shrimp and martinis."

Warner admitted that the event may have been a little over the top. "I walked in and saw some of the things, and was a little taken aback," he said, though it was not clear if he was referring to the sushi, the top shelf booze or the Elwood Blues look-a-like. "But there seemed to be an awful lot of them last night who were enjoying it."

The controversy over Warner's generosity has continued online, where bloggers debated both the merits of the candidate and the questions raised by Warner's relationship with some prominent bloggers. For more than a year, Warner has employed Jerome Armstrong, a close friend, co-author and mentor of Marcos Moulitsas Zúniga, the proprietor of Daily Kos. Moulitsas, who has not endorsed any presidential candidate, repeatedly praised Warner for hosting the Friday night party and being an early endorser of the conference. "We are all going to have quite a bit of time to make up our minds," Moulitsas announced at the Stratosphere. "I've got to say, though, as a first date, this is pretty cool."

Informal and professional polls of online liberal activists show that the community is far from settled on a presidential candidate. In a recent online, and unscientific, Daily Kos poll, Wisconsin's antiwar Sen. Russ Feingold leads the pack, with 44 percent support, while Warner's own numbers have been mired in the low double digits since November.

But 19 months before the opening-gun 2008 Iowa caucuses, Warner understandably suffers from low name recognition. A just-completed professionally designed survey of 1,936 activists who are on the MoveOn.org e-mail list found that only 43 percent knew enough to have an opinion of Warner, split 35 percent favorable and 8 percent unfavorable. Hillary Clinton, by contrast, received favorable ratings from 65 percent of respondents and unfavorable ratings from 33 percent.

At a Saturday panel discussion about the poll of MoveOn activists, Chris Bowers, a MyDD blogger who helped design the survey, said there was clear evidence that the online activists want Democrats who will stand up and fight, whether or not they are ideologically on the far left of the political spectrum. Bowers advised Democratic candidates, "Have some political substance to what you are saying, rather than talk about your personal story."

While Warner wined and dined, Vilsack took a decidedly low-key approach. "I think it's important to focus on the politics and the policy and not the personality," the Iowa governor told a small group of reporters after the education panel. Vilsack also responded to bloggers who have attacked him for serving as the chair of the Democratic Leadership Council, which is reviled by many activists for being too centrist and too accommodating toward Republicans. (Warner is also associated with the DLC, which served as the policy inspiration of Bill Clinton's 1992 campaign.)

"You know what, I am not the enemy," Vilsack said, after inviting the Democratic bloggers to hold their next convention in Des Moines. "I am a pretty decent guy."

At the Stratosphere party, Warner kept to boilerplate language, including his murky position on withdrawal from Iraq, as he greeted bloggers in close quarters. He talked about "transformative change as opposed to incremental change," and trumpeted his red state pedigree. "I am from Virginia." A reporter for the venerable Progressive magazine made the rounds asking bloggers if they knew "what Warner stands for."

As the host stood onstage, dressed in a fedora and dancing between the Blues Brothers, Joe Howell, a New York blogger who designs video games by day, tried to make sense of it all. "I am agnostic," he said about the 2008 presidential race, "and I am waiting for Mark Warner to take a stand."