Forget the Kennedys! Discover the farmers and seafarers of this famed vacation spot through a rich book of oral history and the story of the island as told from a kayak. 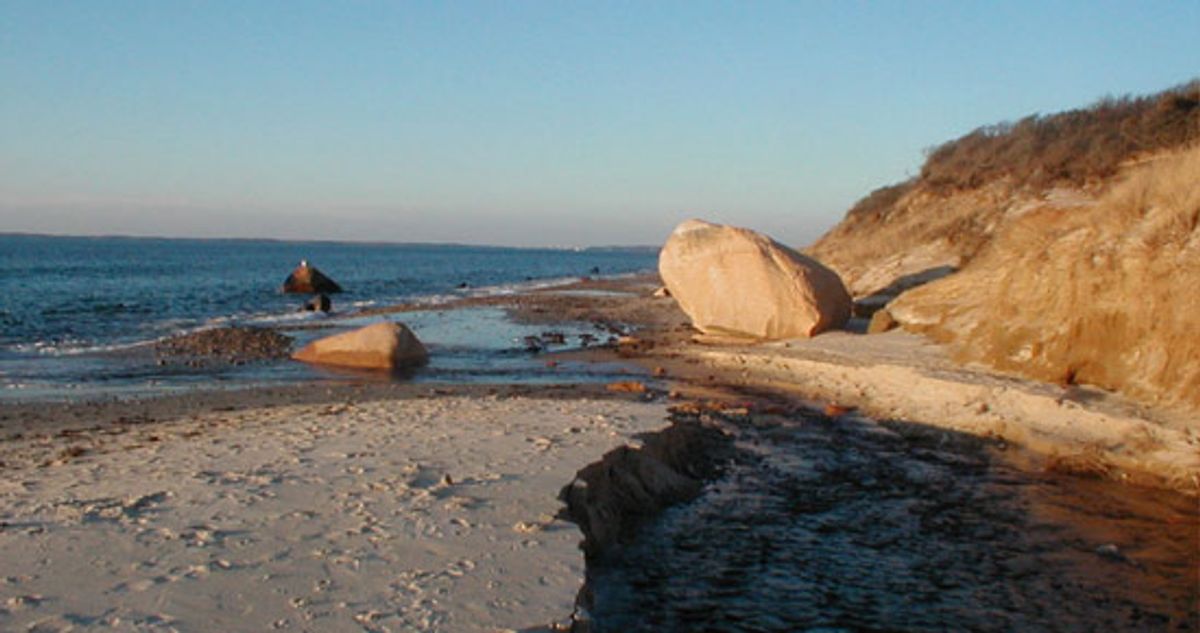 On an island full of storytellers, most year-rounders will tell you nobody's ever written a novel about the real Martha's Vineyard. Elements of the Vineyard's fame -- the Kennedy clan, Bill Clinton, filmmakers, rock stars, newsmen, celebrities, intellectuals and literary giants who summer here -- are not actually central to real Vineyard life. It's fun to watch the likes of Judy Blume ("Summer Sisters") and Anne Rivers Siddon ("Up Island") try to capture the essence of the island, but most locals will leaf through those attempts and say, "Nice story, but it's not really like that here." Even residents who write Vineyard-themed fiction tend toward murder mysteries catering to tourists' fantasies of romantically salty island life. "You gotta actually live here, year-round, to even begin to understand it," say 100 percent of the casually interviewed.

Perhaps that's why personal narratives abound in Vineyard literature. The memoir and its ilk represent the best the island has to offer. The most extraordinary sampling, a tribute to a passing generation of indomitable Yankees, can be found in the two-volume "Vineyard Voices," by Linsey Lee. Here -- along with dozens of gorgeous photographic portraits -- are oral histories taken in recent years of largely working-class fisherman, seafarers, farmers, lighthouse keepers, civic leaders, Wampanoag tribal members, and a peppery island legend named Craig Kingsbury whose entry is dubiously titled "I Didn't Bring Any Skunks to the Island." (His supposed guilt on this topic generated more speculative gossip over the years than did Ted Kennedy's driving skills.)

From the same generation is I.A.R. Wylie, whose novel "Ho, the Fair Wind" is one of the rare exceptions that captures the island both faithfully and fictionally. It's a sweet 1945 romance featuring the most complicated island town: Oak Bluffs, which began as a Methodist revival meeting ground, and went on to become the locus of the Vineyard's nightlife. Wylie's heroine is a girl who comes from off-island to attend church camp, and falls in love with a first-generation Azorean fisherman. An unlikely combination? Not on this island, where scores of families have just that lineage.

This is why most writers who really know the Vineyard opt for nonfiction: The truth is so compelling, why bother making stuff up? Here is the only community in North America that never suffered armed conflict between indigenous people and white settlers -- yet it has bragging rights over one of the first skirmishes of the American Revolution. Its a place where, a century ago, an entire county knew sign language to accommodate a genetic deaf community. It's got some of the oldest commercial fishing ports in America and also the still-thriving native tribe of "Moby-Dick's" harpooner. It's one of the only communities in America that has successfully repelled McDonald's; a place the New York Times described in 1981 as "Yankee Bohemian" when neither term was fashionable; a place that was one of the poorest counties in Massachusetts when some of the richest people in America began to summer here. It inspired and hosted the filming of one of the biggest blockbusters of all times -- and was forever changed from that experience, as you can read in Edith Blake's intimate, photo-filled "On Location..... On Martha's Vineyard (The Making of the Movie Jaws)." Written after production wrapped but before the movie was a hit, this is a breezy, behind-the-scenes depiction by one of the many islanders who worked on the film.

And, of course, the Vineyard has one of the most pristine and diverse shorelines on the East Coast; the 100-square-mile island boasts a range of beaches from sandy dunes to salt marshes to rocky cliffs to deeply sheltered harbors. Nobody can describe it like Paul Schneider. In "The Enduring Shore" (2000) he weaves an ingenious narrative of human and natural history from a most original vantage point: a kayak, with which he circumnavigated not only Martha's Vineyard, but neighboring Nantucket and Cape Cod.

"It was too good to be true," begins the first chapter. "But there he was, back among his friends and family on Chappaquidick. Back in Edgartown Harbor. Back on the island of Martha's Vineyard in the indescribably exquisite month of July, with the rest of his life stretched out before him." This passage and the paragraphs that follow, after lulling the reader into a sense of benign familiarity, turn out to be an enthralling description of an enslaved Wampanoag's escape to freedom in 1614. Schneider then goes on to weave a narrative tapestry stretching from pre-history to the present day. All the while he manages to be at once personal and objective, concise and yet dramatic.

Read this book while sunbathing on the Vineyard's famous beaches (perhaps the clothing-optional Gay Head Beach, in Aquinnah, beneath the much-photographed clay cliffs) or while you're celebrity-spotting on Circuit Avenue. Youll find yourself more amazed by the island itself than by any of its glittering visitors.

Nicole Galland's second novel, Revenge of the Rose, will be published by William Morrow in August 2006.