The GOP is back to its old Rove tricks, attacking Democrats as unpatriotic cowards. If only they could lead as well as they demagogue. 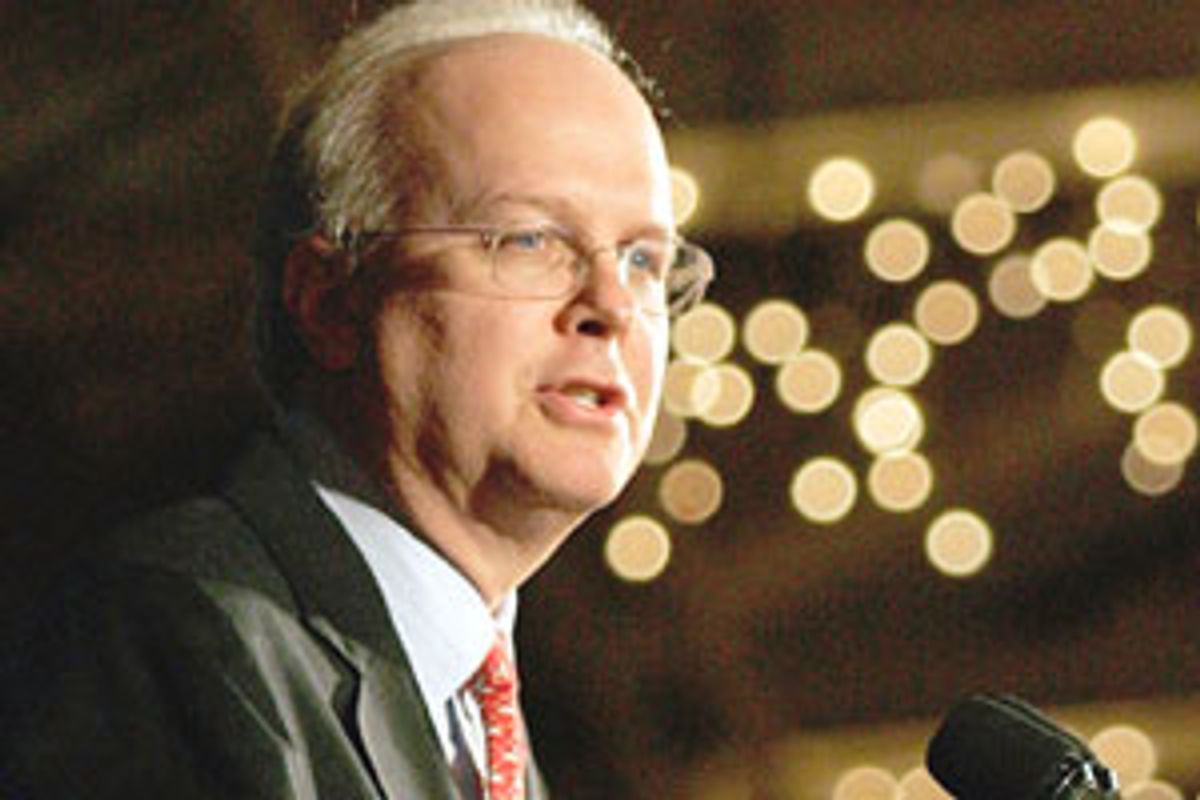 At last we know what Republicans mean when they talk about a "plan for victory" in Iraq. They still have no real plan to achieve victory in Iraq itself, where civil conflict worsens, casualties continually rise, and even the elimination of the leader of al-Qaida in Iraq seems unlikely to reduce the carnage. They have no plan to extricate our troops or even to improve the lives of the Iraqi people. But they do have a plan to win a partisan victory in the congressional midterm elections -- by using the Iraq war to divide this country.

That should come as no surprise, however, since Republicans have employed the same cynical strategy to prevail over Democrats in the past two election cycles.

Newly released from the prospect of a criminal indictment, White House advisor Karl Rove immediately resumed his old habits. The "architect," as the president has called him, is following the political blueprint for the 2002 and 2004 elections: Denigrate the opposition as weak and irresolute; portray the Republican Party as the bulwark against the terrorists who attacked us on 9/11; and impugn the character of Democratic critics, especially those who have served their country in combat.

As he has done in years past, Rove frankly explained his approach in a speech to members of his party. Addressing the New Hampshire Republican Party Monday, he seized the opportunity to imply that Sen. John Kerry and Rep. John Murtha -- both of whom, unlike Rove, volunteered to serve in Vietnam -- are cowards who favor "cutting and running." Suggesting that their dissent from the White House line on Iraq proves that they are unreliable, he said: "They may be with you for the first shots. But they're not going ... to be with you for the tough battles."

The second "tell" regarding Rove's strategy surfaced this week in a "confidential" memo issued by House Majority Leader John Boehner in anticipation of Thursday's debate over a phony House resolution on the war. Boehner instructed his minions to pretend that the wars in Afghanistan and Iraq were the same, to insist that 9/11 made war in Iraq unavoidable and to rewrite the history of the past five years to smear the Democrats as "irresolute" and "wavering."

The truth, of course, is quite different. The Democrats in Congress gave the president total support in the aftermath of 9/11, with an authorization to use military force against the nation's enemies and a moratorium on partisan criticism. They have continued to offer unstinting support for the war against the Taliban in Afghanistan, even though the White House has botched that effort, too.

Rove's aggressive tactics have served his party well in two previous national elections, but he faces a different order of battle this year. Despite the elimination of Abu Musab al-Zarqawi and the president's strange six-hour visit to Baghdad, Americans remain skeptical at best about the war -- and Bush himself is still mired in awful poll ratings. That may have something to do with the reality of the war, which is not susceptible to partisan spin or media manipulation.

Despite the longing of the mainstream media for a Bush rebound -- and despite the bluster of Rove and the Republican congressional leadership -- the facts on the ground in Iraq are not comforting. The death of Zarqawi and the president's quick conclave with the Iraqi cabinet were not the only landmarks of his "good week" -- nor even necessarily the most significant.

The number of American dead in the war has reached 2,500, and the cost to American taxpayers has passed $320 billion. Take those numbers and add to them the tens of thousands of young wounded soldiers whose lives have been ruined, and the tens of thousands of dead and wounded Iraqis. Then try to measure the incalculable damage to American prestige in the world inflicted by the scandalous and stupid mismanagement of the occupation.

That is the price we have paid so far for a war with no end in sight and no exit strategy -- a war that will conclude, at best, with an Iraq ruled by Islamic law and allied with the hostile regime in neighboring Iran and, at worst, with a civil war that threatens to plunge the entire Middle East into chaos. That is the price we have paid for the head of Zarqawi, who could have been wiped out with his little band of terrorists three years ago.

That will be the price we pay to ensure a Republican "victory" next November -- unless Americans act on their growing intuition about these demagogues, who are so brilliant at campaigning and so incapable of governing.