The election of a woman to head the American Episcopal Church is a challenge to purity movements that seek to exclude gays and other "outcasts." 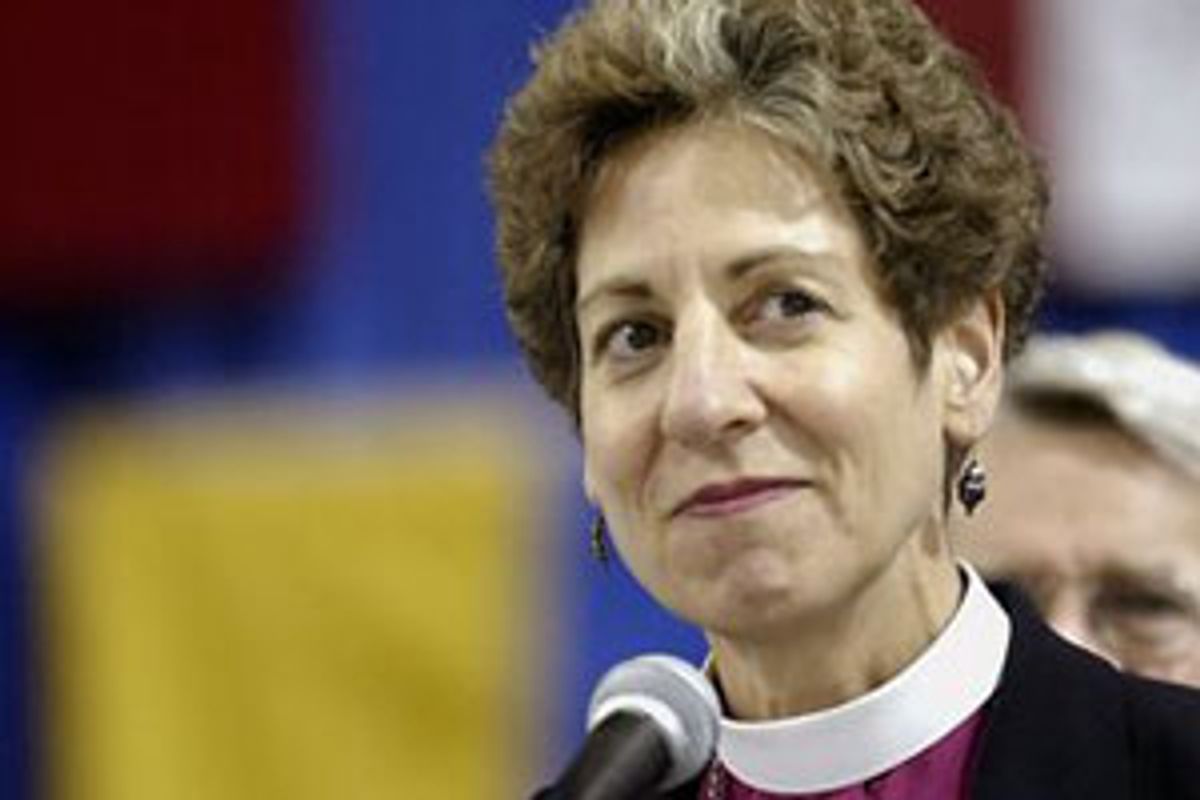 It's always a bit of a shock when God shows up in church. There's not much in Scripture to suggest that God's particularly interested in church of any kind, and Jesus, with his deliberate flouting of religious laws, had a notable impatience with the enterprise.

And yet, as Christians, we hope and pray that it will happen. The election of the Right Rev. Katharine Jefferts Schori, bishop of Nevada, as the presiding bishop of the Episcopal Church in the United States appears to be a hint that something's going on beyond the usual human bickering, self-congratulation, scapegoating and piety that abound whenever church people gather. The "kingdom of God" -- a phrase used by Jesus and often equated by Christians with the church -- is like a weed growing in the tidy garden of human culture. It grows as it will, unbidden and frequently unwanted; its growth is always to God's design specs, not those of tradition-bound churches.

Jefferts Schori, a former oceanographer, was considered a long shot for the position by most church experts: Although she's a fairly mainstream liberal, her gender made it unlikely that the church would choose to be stirred up at a moment when it seemed to require smoothing over and calming down.

The Episcopal Church -- the American branch of the worldwide Anglican Communion, with 77 million members -- had already outraged conservatives three years ago by electing the openly gay Right Rev. Gene Robinson to head the Diocese of New Hampshire. Conservative African Anglicans joined with reactionary American Episcopalians, threatening to pull out of the Communion entirely if the enfranchisement of gay Christians was not stopped. There were name-calling, backstabbing, breakaway parishes, fights over property and thundering sermons about "abomination" and deviance. "The battle is about the authority of Scripture," proclaimed conservative American Bishop Robert Duncan. "It's about the basics of Christian faith ... The issues have to do with sexuality and morality, but at the very heart of it is whether Scripture can be trusted."

The struggle isn't just about gayness, of course, but, rather, a more fundamental conflict between believers who crave certainty and those who embrace ambiguity; those who insist Scripture is inerrant and unchanging, delivered once and for all time, and those who believe the Bible is only part of God's ongoing revelation. The struggle is also about how to define a Christian: as one who seeks to keep religion "pure" or one who welcomes outcasts. It's hardly a conflict unique to Anglicanism or, for that matter, Christianity. As Chris Linzey, an English priest who edited a book on Anglicans and homosexuality, wrote, "The agenda of conservatives is a rolling one: today it is gays, but biblical inerrancy, interfaith worship, women bishops, remarriage after divorce will surely follow. The logic of all purity movements is to exclude."

So the very body of Jefferts Schori, whose election was hailed by shouts of "It's a girl!" is a direct challenge to the purity movements in the church. Three dioceses of the U.S. Episcopal Church do not believe that God has called any women to ordained ministry, and more than half of the 38 provinces in the Anglican Communion, including the Church of England, do not ordain women to the episcopate. The rector of an Episcopal church in Illinois that does not ordain women told the New York Times that the new bishop would not be welcome there. "Just like we can't use grape juice and saltines for Communion, because it isn't the right matter, we do not believe that the right matter is being offered here," he said, apparently referring to Bishop Jefferts Schori's female parts.

And yet God, according to the stories we know, tends to show up in the most unlikely places: in humiliated, unclean women, in helpless babies, speaking in ways that upset the established order and turn tradition on its head. As with Bishop Robinson, Jefferts Schori may provoke schism, and further dismembering of a denomination that has shakily held together despite differences in style, politics and theology. But she may also be a reminder that the institution of the church -- of any human religion -- is, finally, so much smaller than the promise it embodies.

In the Anglican Communion, that disturbing and longed-for promise is enshrined at the center of the Book of Common Prayer, in the service used to ordain a bishop. "Let the whole world see and know," it says, "that things which were cast down are being raised up, and things which had grown old are being made new."

Paul Fromberg is an Episcopal priest and associate rector at St. Gregory of Nyssa in San Francisco.