A lazy Mexican vacation turns sinister -- and grisly -- when a group of middle-class tourists become trapped at an archaeological site. 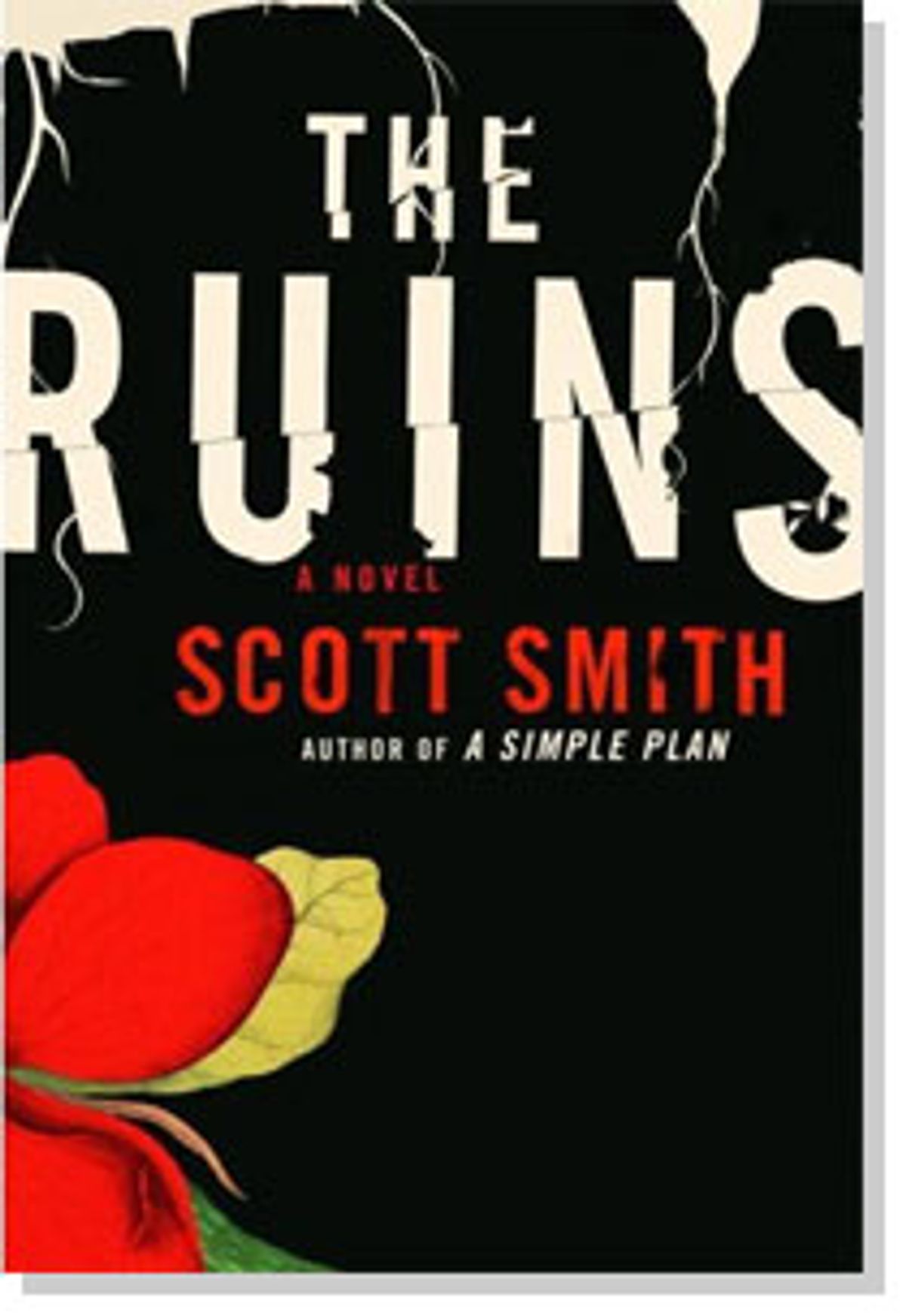 A word of caution to readers, gentle and otherwise: Do not pick up a copy of Scott Smith's "The Ruins" if you have anything else you need to do in the next eight hours or so. Don't start this book if you're especially weak of stomach or nerves, and above all don't pick it up if you're not willing to tolerate some deviation from the usual conventions of thrillers and horror stories. Not everything will be explained to you, and not everything will turn out in the tidy, reassuring ways to which we've all become accustomed. "The Ruins" is like all great genre fiction in its irresistible storytelling momentum, but in its lack of mercy, it's more like real life.

The characters are two young American couples -- a notch above backpackers, but not staid enough for Fodor's -- vacationing in Mexico. They befriend Mathias, a German whose traveling partner, his younger brother, has run off to an archaeological dig in the jungle with a girl he met on the beach. The group decides to add a little adventure to the final days of an otherwise lazy holiday by joining Mathias as he hikes to the site to retrieve his wayward sibling. Tagging along is an amiable Greek, nicknamed Pablo, part of a threesome who have attached themselves to the group despite the fact that none of the Greeks can speak English.

Following Mathias' brother's hand-drawn map, the group eventually wends its way to the remote site and then, through circumstances both intractable and baffling, become trapped there. Their supplies of food and water are limited, the elements are harsh, and one of the party is injured, badly, while investigating a way out. Surely Pablo's two Greek friends will come looking for him sooner or later (even if it's impossible to work out exactly what he told them about where he was going in the note he left back at the hotel). In the meantime, they'll have to figure out how to survive.

Some of the challenges facing the group are the grueling stuff of a John Krakauer book: how to gather more water, how to ration the food, how to conduct rough medicine in the wild. The de facto leader, Jeff, is a medical student who probably keeps a copy of "The Worst-Case Survival Manual" on his bedside table. Jeff is the closest any character comes in "The Ruins" to a traditional hero: He's fairly resourceful, he makes plans, and when he decides that something nasty has to be done, he's got the nerve to do it.

But Jeff isn't really a hero. He's not much good at persuading the others to follow him or to accept the grimmer practicalities of their situation. And as for the others, their responses range from denial to delusion to paralysis. They don't, in short, react with the quick wit, courage and selflessness we expect from the "good" characters in popular culture, but how true to life are those characters, really? The people trapped in the ruins are not Krakauer's practiced adventurers -- they're not even experienced hikers. They're just average, somewhat spoiled, middle-class Americans, and when faced with a crisis, they pretty much shut down.

This can be jolting and frustrating, but in a good way. Like Smith's 1993 novel "A Simple Plan" (made into a film starring Bill Paxton and Billy Bob Thorton), "The Ruins" is ruthlessly frank about how most of us really behave in extremis. The escalating nightmare of the group's fate evolves inexorably from their personalities, in a way reminiscent of Greek tragedy, so Smith couldn't get away with the flimsy figurines that populate more genre fiction. In "The Ruins," all of the characters and their vexed interrelationships are richly and carefully drawn because, in a way, they are the story.

Well, they are except for one final factor, the element of "The Ruins" that tips the novel over into the category of "horror," despite the gritty realism that only serves to multiply the power of this book. I won't give it away, even if some other reviewer probably will eventually. Suffice to say that when things get really bad, this supreme menace holds a kind of mirror up to the trapped vacationers and makes them enemies to themselves. In a way, that's what Scott Smith does in this novel, shows us an aspect of ourselves and of human nature we'd rather not acknowledge. He's such a master, though, that it's impossible to look away.

Our next pick: Edgar Allen Poe appears as a garrulous, obsessive cadet assisting a detective on a gruesome murder case at 19th century West Point