Will the Democrats' best chance be good enough?

Bush's ratings are in the toilet and anti-Republicanism is sweeping the land. But Dems must still overcome incumbency and money to retake the House this November. 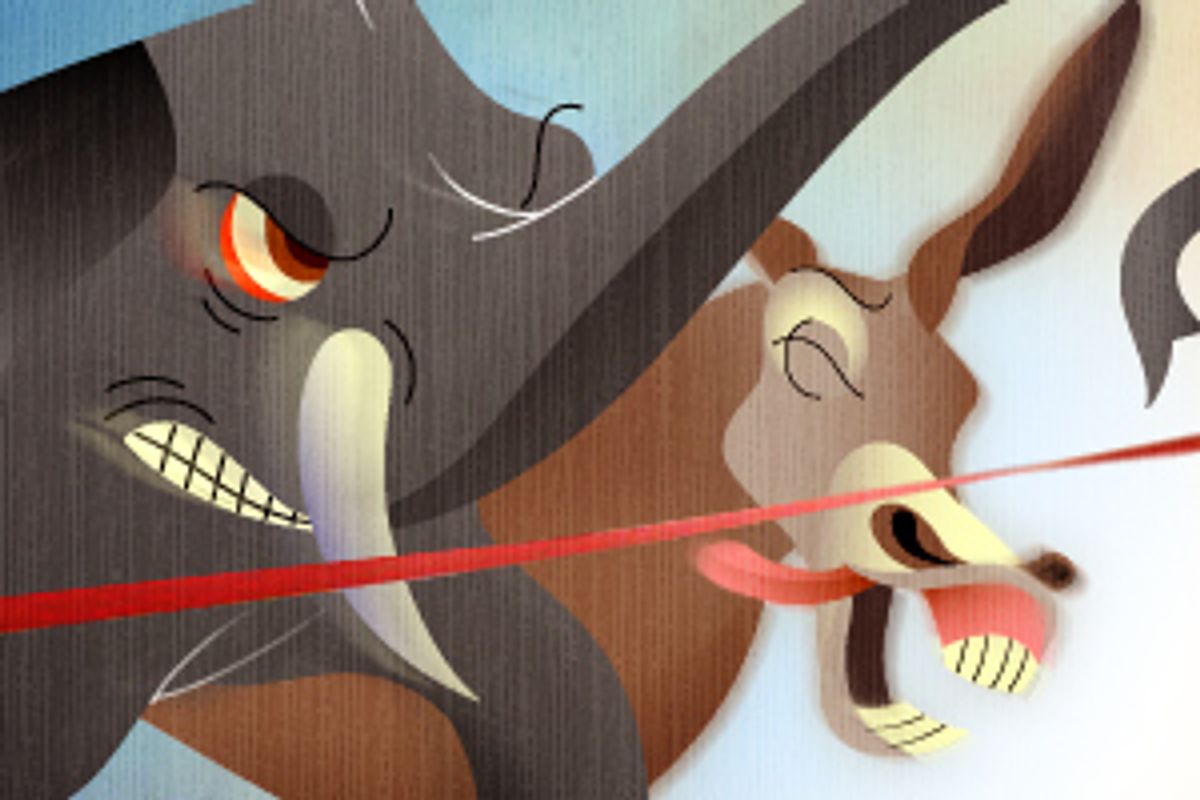 Since the days of Pericles, every politician campaigning for office has been guilty of hyperbole like "My election will decide the fate of civilization." But House candidate Chris Murphy had a point Saturday afternoon when he told a family of friendly Democrats at a local strawberry festival, "This race is going to be looked at nationally. This is one of the handful of races that will decide who controls Congress."

Fresh off a plane from San Francisco, where he attended a win-back-the-House fundraiser sponsored by House Minority Leader Nancy Pelosi, the 32-year-old Murphy, who gave up a state Senate seat to run for Congress, is emblematic of Democratic hopes this year in the Northeast. Running against 12-term Republican Nancy Johnson, 71, who has been in the House since he was in grade school, Murphy said, "We're going to be unapologetic in saying to people, 'Listen, this is your chance to stand up and say, Enough is enough. This isn't personal about Nancy Johnson. This is about a Congress which on every issue you care about has gone in the wrong direction.'"

A picnic table in front of a white clapboard Methodist church in small-town Connecticut is an odd venue to try to answer the vexing question, Can the Democrats win a congressional beachhead in November? But the earnest Murphy, dressed in suit pants, a white shirt and a blue tie, with a mop of brown hair falling over his eyes, is the type of challenger who must knock off an entrenched GOP incumbent if the Democrats are to pick up the 15 seats they need to take control of the House for the first time since 1994.

Even though he has raised more than $750,000, a strong early figure for a Democratic contender, Murphy faces a daunting challenge. Johnson, who has always cultivated a centrist reputation, was thought to be imperiled in 2002 when redistricting forced her to run against a Democratic House incumbent in Connecticut's recast 5th District. Instead, having raised almost $4 million for a district outside the hyper-expensive New York City media market, she won by a comfortable 23,000-vote margin. Even with John Kerry narrowly carrying the district in 2004, Johnson romped home against an underfunded Democrat challenger by more than 60,000 votes.

Johnson's seat is in play for only one reason: George W. Bush is less popular in Connecticut than an infestation of tent caterpillars. In fact, with three of its five House seats held by vulnerable GOP incumbents, Connecticut may be the state where Democrats finally get their revenge against Sunbelt conservatives. Triangulate all they want, last-gasp moderate Republicans like Chris Shays in affluent Fairfield County and Johnson herself find themselves trapped between their president and their congressional leadership on one hand and their Democratic-leaning constituents on the other.

Talking about the national political outlook, Democratic pollster Mark Mellman said, "A very heavy anti-Republican wave is building and it's going to hit against a very stable political structure. And what is unknown is which will be more important in November -- the size of the wave or the stability of the structure."

Johnson's biggest structural advantages are incumbency and enough money (thanks to her seniority on the Ways and Means Committee, a mecca for lobbyists) to saturate the airwaves on the Hartford and New Haven TV stations that adjoin the district. When the left-wing independent Democratic group MoveOn.org ran ads lambasting Johnson over the Medicare prescription-drug bill and gasoline prices, the incumbent responded with a TV blitz tarring Murphy. "Chris Murphy's special-interests are at it again" was the snide way one of the Johnson spots began. "We basically introduced Murphy to the voters," boasted Johnson's campaign manager Dave Boomer. "And the reason we did this was that MoveOn was attacking us and we had to respond."

The Johnson race illustrates why handicapping House and Senate races is so difficult. You can put the relevant factors on the table: Bush's abysmal poll numbers; Democratic aggressiveness; a dispirited Republican base; the political history of individual states and districts; the GOP's fundraising advantage in most, but not all, races; the scorched-earth tactics that both parties will use in the ad wars; and the Republican's proven record in getting out their vote in the 2002 and 2004 elections. But it is virtually impossible to know how to weigh them nearly five months before the elections.

No one other than Republican mouthpieces reciting talking points to credulous TV hosts denies that the Democrats will almost certainly gain congressional seats in November. But corralling a majority in either house -- and the committee chairmanships and subpoena power that go with it -- will be tricky.

Right now, the expectation is that the Democrats are better positioned to win the 15 seats needed to take the House than to gain the six Senate seats needed to give them a 51-49 majority. According to the latest rankings by the National Journal, 17 of the 18 House seats most likely to switch party are held by Republicans. (The Johnson seat comes in a bit lower on the National Journal chart.) Congressional Quarterly, which has a dandy political map, identifies 74 House seats theoretically in play -- and, tellingly, 52 of them are currently Republican territory.

The count-the-states-on-each-finger game for a Democratic Senate majority requires more suspension of disbelief. Republican social conservative Rick Santorum in Pennsylvania is atop everyone's endangered species list. Mike DeWine in Ohio may well be upended by the anti-Republican mood in a state where the scandal-plagued outgoing governor, Bob Taft, has become synonymous with the word "albatross." Conrad Burns in Montana may be one of the few GOP incumbents to go down to defeat solely because of his entanglements with disgraced lobbyist Jack Abramoff. And a number of Democrats are optimistic about Claire McCaskill's chances against first-term Republican Jim Talent in Missouri. Then give the Democrats one of the three long-shot races in Tennessee, Arizona or Virginia, where there is the beguiling fantasy of knocking off 2008 presidential contender George Allen.

This best-case scenario would leave the Senate divided 50-50 with none other than Dick Cheney casting the deciding vote. Which brings us to the weirdest -- and potentially the most important -- primary race in the country. Rhode Island's Lincoln Chafee, an authentic liberal Republican who voted against the Bush tax cuts and the war in Iraq, is being opposed in the Sept. 12 primary by Stephen Laffey, the conservative mayor of Cranston. On today's ideological grid, Laffey is an orthodox Republican and Chafee is a throwback to the days of Nelson Rockefeller and Jacob Javits.

So why is the entire national Republican Party from Karl Rove on down passionately rooting for Chafee? Because the right-wing Laffey has no chance of holding the Senate seat, while Chafee would have a narrow edge over Democratic challenger Sheldon Whitehouse. I asked a Republican operative what the GOP's official position would be if Chafee came out in favor of impeaching Bush but said he would stay with the party to organize the Senate. The answer was instantaneous: "We'd be 100 percent for Chafee."

There are few reliable public polls for individual House campaigns, and even Senate-race surveys should not be considered definitive this far from an election. (All partisan polls should be viewed with skepticism, since only the ones with good-news results are generally leaked to the press.) But the statistic that matters the most politically is Bush's job-approval rating. New York's Chuck Schumer, who heads the Democratic Senate Campaign Committee, said at a press briefing last week, "I think 75 percent of this election is going to be a referendum on Bush."

That is pretty much what Chris Murphy is banking on in Connecticut. As he explained, "When I talk about the Republican Congress and George Bush, I get the same reactions. People in this district are savvy enough to know that it isn't only about the president, but it's also about what Congress does." Whether that theory trumps money and incumbency is the great imponderable as the Democrats try for the sixth time since the Gingrich revolution to make the House a home.