Like wine, luxury chocolate now has connoisseurs who tout its "mouthfeel" and "terroir." Bring back "melts in your mouth, not in your hand"! 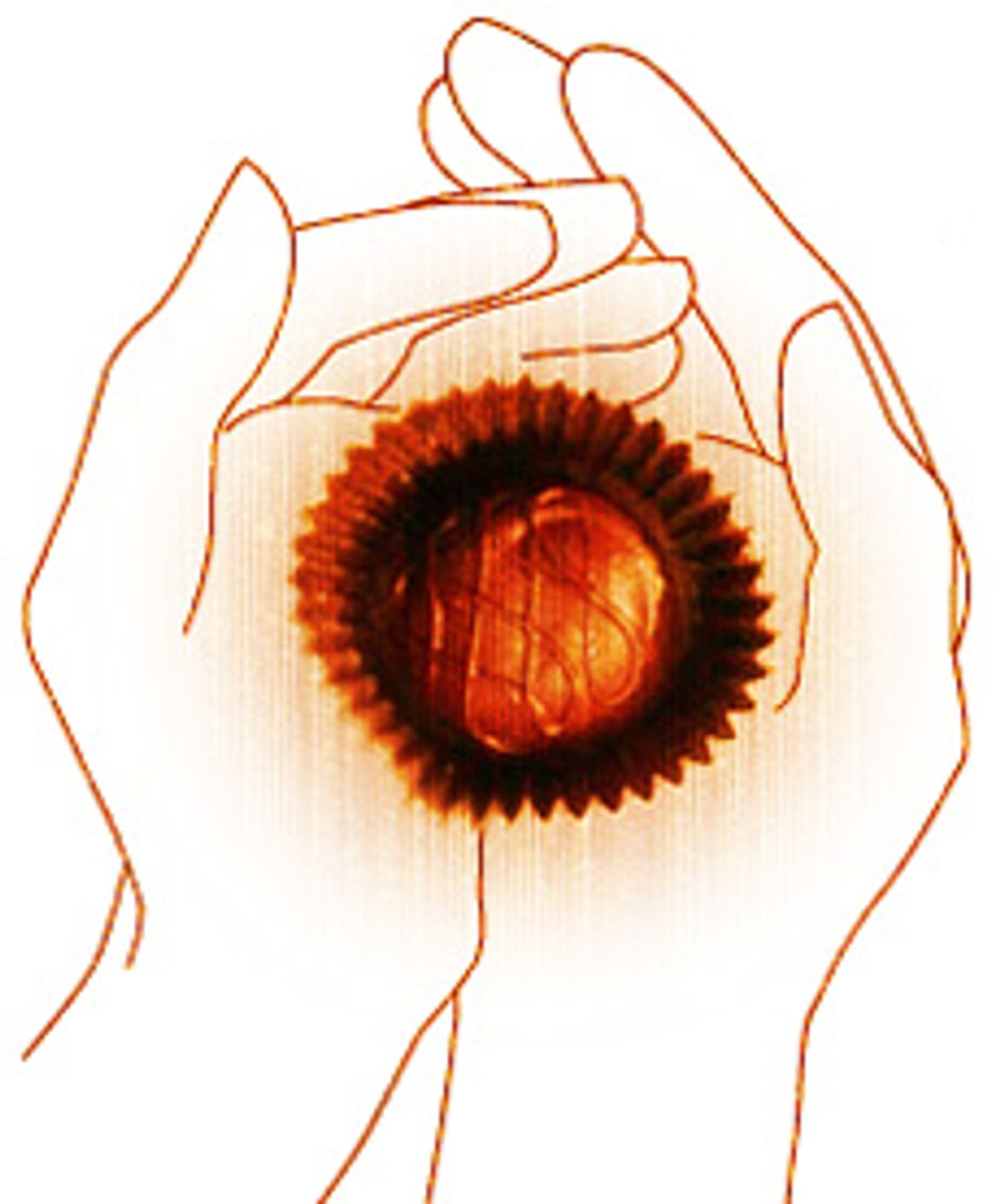 Twice recently, I've attended dinner parties where "high-percentage" chocolate was served as a dessert. Or perhaps dessert is the wrong word; more like a post-prandial treat. Much ado was made of these bitter victuals, as if each cube were a dram of fine port, meant to be lingered over and praised. One host (who keeps her chocolate in a special "chocolate chest" above the refrigerator, which she only takes down for guests) subjected us to a short lecture on the provenance of the chocolate, and how she discovered it, before allowing us to take a single bite. Another enthusiast at the table told me, with the self-congratulatory air of a true connoisseur, that it's possible to detect up to 400 flavors in a single cocoa bean. To my uneducated tongue, the stuff tasted more like crayons than a high-end luxury item. Since when, I wondered, did chocolate become an acquired taste?

In the 500 years since chocolate was introduced in Europe, by Fernando de Soto, who swiped it from the Mayans, chocolate has been a primarily downwardly mobile commodity. Initially blended with cinnamon and sugar and served as a hot beverage to the privileged classes, by 1830 advances in manufacturing techniques had given rise to the chocolate bar, and with the invention of milk chocolate in 1875, the way was clear for companies like Cadbury, Nestli and Hershey's to begin producing on a mass scale. It wasn't long before chocolate lost its class connotation and rode these mighty brands -- Hershey's in particular -- to become the candy of the people. The trend reached its zenith during WWII, when chocolate was accepted as a universal currency of good will, handed out to children by friendly GIs set on winning hearts and minds en route to Berlin. Over the course of the war, roughly 3 billion chocolate bars, in poison-gas-proof packaging, were distributed to GIs across the globe, the vast majority produced by Hershey's. In 1964, Roald Dahl gave the world "Charlie and the Chocolate Factory," the popular children's book in which a common chocolate bar serves as the key to a magical kingdom -- a poor boy's fantasy of infinite riches. Today, tourists can get a real taste of that kingdom when they visit Hershey, Penn., where the Hershey Co. has built its own chocolate-themed amusement park, marking the definitive end of chocolate's 500-year downmarket slide.

But a few years ago, something interesting started happening. A new kind of chocolate began cropping up in health food stores and specialty boutiques, recognizable by the cacao percentage printed on the front of the label. The cacao percentage indicates what percent of the chocolate comes directly from the cacao bean. With percentages usually ranging somewhere between 50 percent and 80 percent, the new chocolate seemed expressly designed to take the piss out of industry giants like Hershey -- whose most popular bar is rumored (they won't say) to contain around 11 percent cocoa -- and, more important, to rope in a new class of consumer, the kind of diet-conscious, urban sophisticates who favor organic, and for whom the opportunity to repudiate "big chocolate" is in itself a valuable commodity.

European chocolate companies have always labeled their chocolate with cacao percentages, but it was the Berkeley, Calif., Scharffen Berger chocolate company that, in 1997, introduced the practice to the States, and made it a central element of its marketing strategy. Other companies, like Guittard, in Burlington, Calif., and Ghirardelli, in San Leandro, Calif., soon followed suit. Some emphasized that their beans came from a specific region, or "terroir," as it's called in wine snob parlance, and produced only limited "vintages." Others, like Milwaukee's Omanhene Cocoa Bean Co., provided instruction in chocolate appreciation, explaining how the chocolate should be best enjoyed ("Hold the bar firmly between the thumb and forefinger at each end and briskly snap the bar in half. Fine chocolate should give a satisfying snap and result in a smooth surface along the break"). Still others, like health and fitness advocate Gary Null, focused on the health benefits, pumping their chocolate full of antioxidants, phytonutrients and heart-healthy phytosterols.

While health benefits have been attributed to chocolate for, oh, about 3,500 years, it was the discovery, in 1998, of the scientific basis of these benefits that really cleared the way for the ascendence of luxury chocolate. "The presence of antioxidant phenols in chocolate, which are also present in red wine, could help to reduce the risk of coronary heart disease," the press release said, citing a paper that appeared in the December issue of the British Medical Journal. Last January, a new generation of chocolate researchers from the University of California at Davis, working in Panama with a population of Kuna Indians, known for their cocoa-rich diets, finally put their finger on the key ingredient, which is called, for what it's worth, Epicatechin.

Of course, luxury chocolate has been popular in the States since at least 1966, when Campbell's bought the Belgian company Godiva and made it a staple of high-end suburban shopping malls. But never before has the appeal been so ... intellectual. And here's the great irony: that a product that has long enjoyed an enriching association with hedonism and carnality should now succumb (as wine occasionally does) to the cerebral. It's the cerebral element that makes luxury chocolate fertile ground for snobbery, which reveals itself mostly in the language, largely pillaged from the world of wine. "Aroma brings a strong suspicion of a milky nature," writes one chocolate reviewer on the chocophile Web site SeventyPercent.com, reviewing a new bar by Michel Cluizel, "with an upfront creamy and cheesey tone, very much dairy in initial impression. Later the chocolate comes out, expressing cherry cordial fruitiness, along with some tobacco. It can't be said that this is exactly typical of Madagascar beans, and yet it's not bad, just, perhaps, a little disconcerting at first. Are there troubles to follow in the flavour?"

With more than 10 brands of high-percentage chocolate cluttering the shelves of upscale grocery chains like Whole Foods and Wild Oats, chocolate snobs are springing up like toadstools after a rain. There are chocolate tasting clubs that will ship samples to you monthly, along with detailed tasting menus, score cards and "chocolate tasting batons" for sampling flavors. At the Web site for Richart chocolates (Paris), you are told to "expand the chocolate's surface area by chewing five to ten times." Also, the chocolate should be "between 66 and 75 degrees fahrenheit." "True chocolate aficionados let the chocolate melt on their tongue and enjoy the various degrees of intensity and sensual feelings while it liquefies," the Lindt Web site explains. "At the beginning," one independent reviewer on a chocolate tasting Web site says, following Lindt's lead, "we were quite lax in our chocolate choices, we took everything from 45% chocolate solids on up -- even some chocolate that wasn't labeled with the amount of chocolate solids. Every year since then we have upped the minimum requirements so that lately we are only considering chocolates over 70%. Sorry folks, Ghiradelli [sic] and the like don't cut it." On another tasting site, a reviewer says she won't review common bars like Snickers because they are "candy," not "chocolate."

It's hard to know who to blame for this orgy of pretentiousness, the consumers or the chocolatiers. Both parties seem equally eager to replace chocolate eating with chocolate tasting. Who knows -- soon the more dedicated connoisseurs may start spitting out their chocolate as if it were wine. Whatever the case, the trend is helping to push the gourmet chocolate market to record profit levels. In 2004, MarketResearch.com estimated the retail sales of gourmet chocolate at $243 million, expected to reach $395 million by 2008. The Center for Culinary Development recently cited chocolate (along with white tea and tropical fruit) as among the top three anticipated food trends of 2006. These days you can walk into the specialty foods section of any Whole Foods store and find piles of roughly hewn chunks of chocolate, right next to the imported cheeses and the tinned tea, wrapped in cellophane and plainly labeled by cocoa percentage and provenance. "The basic chocolate, the M&Ms and Snickers and all those, they grow 3 to 4 percent per year," says Jacques Torres, who opened his own New York chocolate boutique, famous for such esoteric edibles as Taittinger champagne truffles and pineapple pastis, five years ago. "If you look at the high-end market, it's growing almost 20 percent a year. For the same thing! For chocolate!"

If nothing else, the ascendence of luxury chocolate is a triumph of marketing. In a few short years, the gourmet chocolate industry, working within the currents of existing food trends (organic, health-conscious) and emerging scientific data, has managed to rebrand a product previously considered junk food into something once again approaching the high-class delicacy enjoyed by the Spanish court in 1585. It's brilliantly synthesized a new market: a population rich enough to afford expensive chocolate, and politically sensitive enough to care about socially conscious businesses; refined enough to always prefer handmade products over manufactured products; educated enough to enjoy quibbling over cocoa percentages and the characteristics of various bean types, and to expect something more like a full-blown aesthetic experience from their dessert, as opposed to just a good sugar kick; intelligent enough to have quit smoking, but still human enough to crave something sinful after a meal.

But surely there's something, well, bittersweet, about a world that can't bring itself to sin without an intellectual excuse. When we were children, eating chocolate was usually a matter of not getting caught, particularly in the chaste hours before noon, when the day was still too young for any treat to have been earned. Now, though, we are absolved; there's even a Web site to reassure us that when it comes to chocolate tasting, "morning is preferable, when one's discernment is at its zenith." Perhaps, whether it's Bernard Castelain's Tradition (71 percent) or Côte d'Or's Noir de Noir Intense (70 percent), Dolfin's Chocolat Noir (70 percent) or Michel Cluizel's Amer (72 percent), those who struggle to enjoy chocolate's naughty pleasures now are simply trying to rediscover what the treat first tasted like -- when their palates were as pure as their consciences.