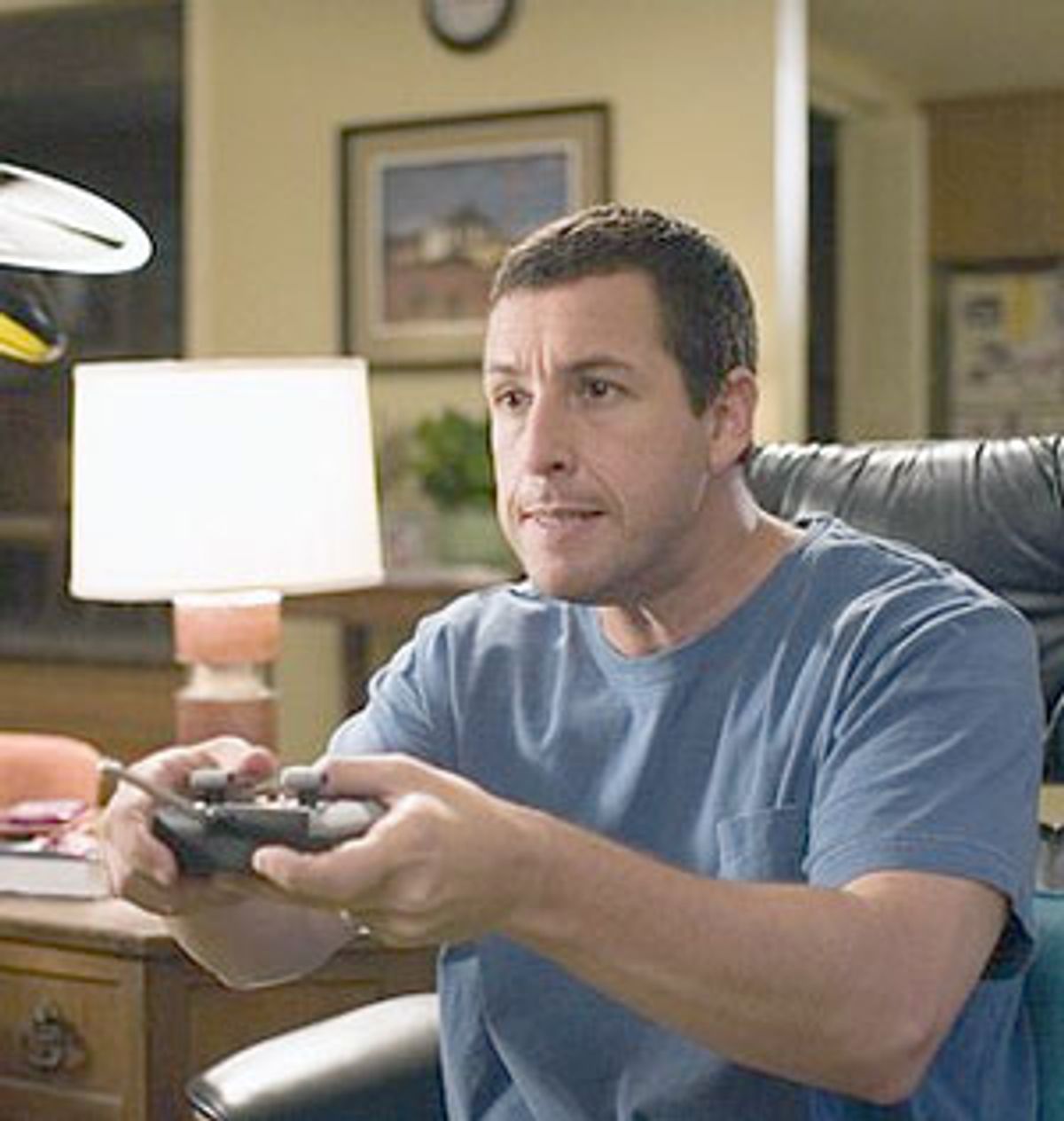 Metaphysics in Hollywood movies is like "fine dining" at the mall. You know it's there, and sooner or later you're going to consume it. Arguably it's better than the assembly-line crap offered elsewhere. But it always ends up being a curiously unsatisfying experience, without enough substance to fill you up or enough sugar to get you buzzed.

This description goes some distance toward describing the peculiar effect of "Click," Adam Sandler's latest attempt to shoehorn his goofball-wiseacre persona into a movie ostensibly intended for grown-ups. I suppose all of Sandler's star vehicles since around "Little Nicky" in 2000 come under this rubric, but "Click" has extra doses of attempted pathos. Playing a self-absorbed architect named Michael Newman, Sandler grows old and fat and gray (although not all at the same time), cries at his dad's death and his son's wedding, loses his wife to another man in a too-tight Speedo (it's Sean Astin) and has to deal with it in various sleek, late-21st century sets. Oh yeah, along the way to old age and loss he also plays with the loose skin on his tummy left behind by liposuction, whappety-whappety-whappety, and climbs atop the desk of his unctuous boss (David Hasselhoff) to fart right in his face.

OK, that last bit only happens because Michael has acquired a Universal Remote Control, with which he can control his universe (get it?). He can freeze, mute or fast-forward the world around him whenever he wants to, although, for unexplained reasons, the rewind button doesn't seem to work. With this immense power -- given to him by a guy named Morty (Christopher Walken), who works in the secret back room of Bed, Bath & Beyond -- comes immense responsibility, and I am sorry to tell you that Michael misuses his responsibility. Seeking to avoid conflict and trauma, he fast-forwards through his life, into a lonely, lovelorn future he doesn't like. Can the effects of the Universal Remote be undone? And who is Morty, anyway? (Scholars of the Romance languages may already have a clue.)

If this sounds like a story you've heard before, well, duh. One of the principles of Hollywood metaphysics is KIPSS -- Keep It Profoundly Simple, Stupid. Having already remade one Frank Capra moral fable about simplicity, power and money (the lugubrious "Mr. Deeds," from 2002), Sandler here seems to be updating "It's a Wonderful Life" -- itself lifted from Dickens' "Christmas Carol" -- for the age of product placement and electronics superstores. For that matter, "Click" feels awfully similar, in its toneless preachiness and lack of good jokes, to Jim Carrey's quasi-religious hit "Bruce Almighty." Why shouldn't it? The screenwriters of both films, Steve Koren and Mark O'Keefe, are the same. (They've also got a sequel to "Bruce Almighty" on the way, without Carrey but with Morgan Freeman returning as God.) Then again, you could get literary and suggest that this is another reworking of the Faust legend, but I don't remember anything about Faust trading his immortal soul to Mephistopheles so he can lay a stink bomb in somebody's puss.

It would be stretching the point immensely to say that I'm a fan or an admirer of Sandler's. But I don't dislike him, especially, and one way or another I've wound up seeing most of his films. (They have a physical property, I believe, that causes them to fill up vacuums on cable networks, aboard airplanes or in hotel rooms.) "Click" isn't the best or the worst of Sandler's movies, but it illustrates his peculiar situation. He possesses a certain gift for wiseass, partly self-mocking comedy (in fairly small doses) and also has a sympathetic, regular-schmo quality (ditto on the doses). As he himself has admitted, he's not enormously talented or especially handsome, and it's amazing that he's been able to turn these abilities into a career as a major motion-picture entertainer.

On one level, Sandler is the class clown who seems fundamentally not serious about anything, and that's a major source of his appeal. Yet almost all his films contain a sweetheart moral lesson about the Little Guy and the importance of love, family, home and other good things. He always provides a certain amount of extra-crude grade-school humor that crosses all possible demographic boundaries, and his characters, if you want to call them that, are generic American dudes, completely unspecific in terms of class or ethnicity. Yet Sandler also drops clues here and there throughout his work that, after all, he's an East Coast Jewish liberal comedian who went to NYU and undoubtedly knows what to do with the business end of a bong. ("Click" features repeated drug jokes, and Michael's parents are played by Henry Winkler and Julie Kavner, which is about as Jewish as you can get without saying so.)

As directed by Sandler's college buddy Frank Coraci (who also helmed "The Wedding Singer" and "The Waterboy"), "Click" just tries to pile episodes on top of each other in the theory that eventually you end up with a story. We're supposed to cackle at Michael's family dog and its long-running anal-sex relationship with an enormous stuffed toy duck, and sniffle at Michael's realization, some years too late, that family is actually more important than business. I don't think any of it really hangs together as anything resembling drama, or that Michael is ever a remotely likable character, before or after his day of reckoning. But Adam Sandler didn't get where he is today by making movies for me and Roger Ebert to like.

More to the point, the jokes don't come frequently enough in "Click," and aren't all that funny. The whole surreal Bed, Bath & Beyond scenario is pretty amusing, and Astin makes the most of his brief appearances as the wife-stealing, bulge-packing swim coach. But Kate Beckinsale is largely invisible, in a cute way, as Michael's long-suffering wife, and in general the ratio of treacle to belly laughs is high and rising. Is that a problem? Maybe not. Never underestimate the public's desire to be taught lessons and granted insight into metaphysical truths, I say. Especially if you get to see a golden retriever do a big yellow ducky up the behind along the way.