Score one for the Yanks

Yes, the USA team went down in ignominy at the World Cup. But guess what? World soccer fans were loving us in Germany. 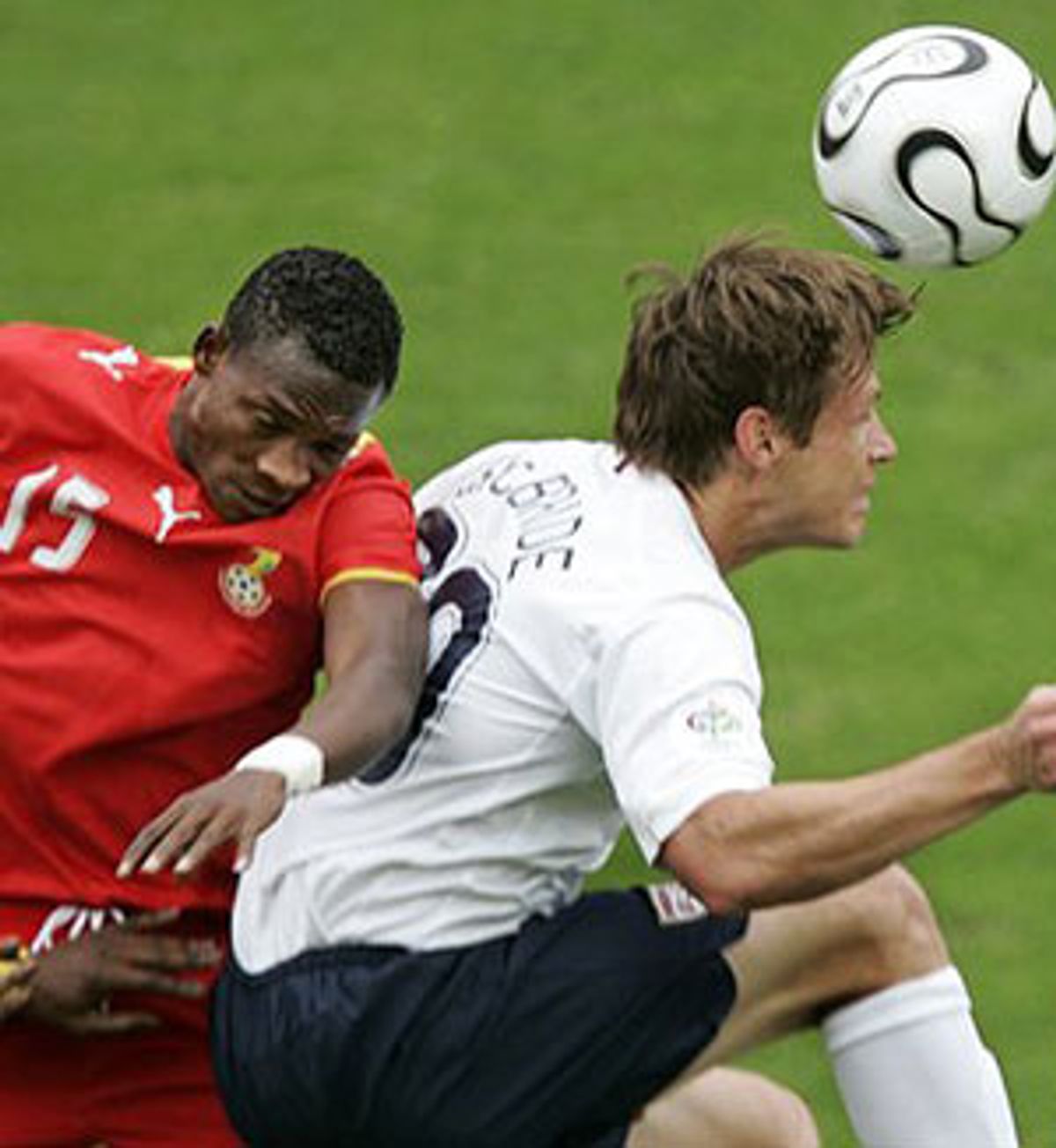 From where I was sitting in the epicenter of the Ghana-fan section, three seats away from drums that never ceased beating, American defender Oguchi Onyewu's foul didn't look like much of one. Indeed, my neighbor to the left seemed as puzzled as I was. But referee Markus Merk (now the most famous retired dentist in the world) was certain Onyewu had fouled Ghana forward Razak Pimpong from behind, and awarded a penalty kick to Ghana. Ecstasy broke out around me as midfielder Stephen Appiah fired home the shot that would send the West Africans into the next round and send the United States packing.

There was no ill will in either direction, though, not from Americans who felt they had been robbed, nor from triumphant Ghanaians gloating over their toppling of a superpower. A political superpower, that is. Despite its corniness, the motto for the 2006 World Cup -- "a time to make friends" -- was alive and well in Section 1b of the Nuremburg Frankenstadion on Thursday. I felt it throughout Germany in all the bars, trains and super-populated public viewing spaces I visited during the first two weeks of the world's most popular sporting event.

Despite the disappointment, all was not lost for the Americans in Germany. Large contingents of fans from Virginia, California, Pennsylvania and Texas -- no doubt inspired by midfielder, neophyte rapper and Texan Clint Dempsey (aka "Deuce") -- traveled to Nuremburg in support of their team. (No slight to residents of other states; these were the only contingents I could identify.) Allow me to pause for a minute to underline the importance of the words "their team." Perhaps for the first time at a World Cup not played in the States, Americans were out in full, spirited and gregarious force. Even four Brits -- two from Leicester City and two from Nottingham, diehard soccer fans because only the brave admit supporting those sides -- told me they were impressed by the Yanks. America, the world's football fans are proud of you!

Save the self-congratulatory pats on the back, though. There are four long years to consider this quick (and unnecessary) exit from the World Cup. Obviously there is still a long way to go in both footballing prowess and fan support, but that's taking nothing away from the great turnout by Americans, who seemed to just about outnumber the Ghana supporters in the Frankenstadion. Sitting in the Ghana section, however, it was hard not to switch allegiances. Chants of "U-S-A!" are little match for rhythmic drumming, ultra-charismatic fan support and what I'm pretty sure was some low-grade marijuana, brought out just as the final five minutes of injury time was announced to the crowd.

Despondency looks the same whether it's caked in red, white and blue makeup or worn as a frown by a tiny blond 10-year-old American girl who sits across from you on the train ride back from the stadium. The news that Italy had beaten the Czech Republic was more salt rubbed into the fresh wound. Had the U.S. managed to win, it would have been its flags waving on the long walk past the old Zeppelinfeld -- the massive meadow surrounded by rows of columns facing a large tribune constructed from plans drawn by Nazi architect Albert Speer. It didn't help that on this day, the Ghana side seemed eminently beatable. But baby steps, America, baby steps.

While culture critics feasted on the fascinating contradictions in Germany, there was some great football played in the first round of games, and highlights of public spectatorship were many. I spent the tournament's first, absurdly sunny Saturday afternoon at an outdoor bar/club/lounge/pool/wonderland called, rather inexplicably, Platoon, replete with a massive screen and two-tiered stands to boot in (east) Berlin's young and artsy Mitte district. The very fact that such a venue exists, and in total dedication to extracting maximum pleasure from a few football matches, is a testament to how saturated the country is in all things Weltmeisterschaft.

While not surprising, it is impressive to note that nary an advertisement on TV, in a magazine or newspaper, on a bus or on the metro does not have something to do with football. Halftime at matches is torturously rote: 15 minutes of what I'm convinced are the same commercials broadcast in exactly the same order. Even late-night television ads for phone sex lines feature pouting frauleins clad, momentarily, in full team kits, cavorting between studiobound goalposts, all the while daring you to, ahem, "score." But, football fanatic that I am, and lascivious or not, such excess feels like paradise.

And paradise apparently serves grilled chicken Caesar salads and Alsterwasser (a mixture of lager and lemonade that, despite how that may sound, is perfectly refreshing on a hot afternoon) with a view of Hamburg's famous harbor. Accuse me of Monday-morning quarterbacking (or centerbacking, as the case may be), but I wasn't expecting the U.S. to upset the Czechs as easily as they did the Portuguese in their first match at the 2002 World Cup. The Czechs were the strongest team at the 2004 European Tournament until their captain, Pavel Nedved (whom many have rightly noted is a dead ringer for a "Roadhouse"-era Patrick Swayze), fell to injury. To shield myself from possible shame, I wanted to watch the match in as comfortable a public setting as possible -- to ensconce myself in comfort to make the inevitable jibes and catcalls directed at yours truly less hurtful. Enter the phenomenon of the German beach club.

Often miles away from an open body of water, consisting of a boatload of sand dropped in the middle of open space in the middle of a city, beach clubs have become quite the rage in Germany. Uniting the beach and football is nothing new -- just ask the Brazilians -- but for the neutral spectator, the idea is tinged with genius. No doubt we have some Bauhaus-influenced brilliant mind to thank for this blessing. And though it pained me to see the U.S. so thoroughly beaten by the irresistible Czech attack, I cannot deny that the blow wasn't cushioned by a comfortable deck chair and a cold Beck's.

The other side of paradise can be found at Hamburg's Fan Fest, held in a massive open field called Heilingengeistfeld, capable of hosting upward of 50,000 people, all in the shadow of an equally massive flak bunker, which, after the Second World War, was scheduled for demolition; it survived all attempts at its destruction. How's that for German engineering? Four public seater stands (and one private one) face a gigantic LED flat screen, while smaller concourses snake around behind the stands, featuring tents dedicated to the cuisines of each of the 32 nations represented in the tournament. This is the province of both the diehard fan and the dilettante, equally welcoming to families and fanatics alike.

One of the things you notice very quickly about the World Cup's propensity to bring people together from various countries who might never cross paths is that the smallest measures of shared cultural understanding can make for fast friends. In the wake of Iran's 3-1 loss to Mexico, it's entirely fine for the German Fan Fest emcee to sing "La Cucaracha" in Spanish and both Mexican and Iranian fans alike will dance around in a huge conga line, loving every second. Perhaps I'm discounting alcohol as a contributing factor, but I do think that soccer has a lot to do with it.

"Vaya Con Dios" sang the Argentine to a clutch of Serbian (or Montenegrin) fans as they walked down the pedestrian-only concourse leading from the Gelsenkirchen Hauptbanhof (train station). It was a fitting, and perhaps necessary, blessing given what was to transpire between the footballing representatives of these two (recently three) countries later in the day.

I took a 5:40 a.m. train from Hamburg to Gelsenkirchen, a ride besmirched not merely by drunken German fans who boarded in Bremen (how they were drunk by 6:40 a.m. I've no idea) but also by the weather. A smattering of rain dampened the journey, but let up by the time I heard that sweet Argentine serenade. Skies remained gray, but the mood in the streets and subways was spirited. It looked to be a grim day for football, yet in the minutes before the gates to the Arena auf Schalke were unlocked -- and the cynical will not believe this -- a chasm of bright blue and sunshine broke through the clouds directly over the stadium. It appeared that God had, once again, a hand in matters concerning Argentine football.

Wearing large, dark sunglasses, I felt free to gawk at the spectacle before me. You could lose yourself in color: Serbian navy blue, the albiceleste of the Argentines. Four inexplicable Poles wore their country's red as if merely to complete the spectrum.

Beyond my comprehension, the doors opened three hours before game time. And despite plenty of evidence to the contrary -- namely, the throngs of people entering on all sides of me -- I couldn't help feeling special, as if World Cup president Sepp Blatter had an eye out for me. To be seated alone in the giant stadium could be described as peaceful if not for the German pop blasting over the loudspeaker.

The game, alas, was over before it began. Maxi Rodriguez scored in the fifth minute as the Argentines pinged the ball about with single touches, between and behind the vaunted Serbian defense. But even so fluid an attack could not prepare the crowd for what will be regarded as "the Goal." I'm almost certain countless babies were conceived in the moments after Esteban Cambiasso expertly finished Hernan Crespo's cheeky back-heeled pass into the top left half of the net. It's the kind of goal that creates football fans for life.

There were four more Argentina goals, one scored by budding genius Lionel Messi. Messi, who could be the best player at this tournament, is a stoop-shouldered kid with tousled hair who shuffles his weight gently, but perceptibly, from foot to foot, as if the tag of "the new Maradona" didn't weigh a thing. Of course, he takes off like a shot when he wants to, and was too much for the Serbs, assisting a goal and scoring one in just 15 minutes of play.

A game like this makes everyone smile, even those humbled in defeat, as I witnessed after the match, watching the Netherlands-Ivory Coast match with five smiling Serbs in a crowded bar. But really, what else can you do but smile when you lose by a touchdown in American football? A Scotsman and an Englishman squeezed between us and we were able to share predictions for next year's English premiership. They then told me about trying to buy scalped tickets from a "tout," going to the ATM to withdraw the money for the tickets and returning only to find the tout in handcuffs, pressed chest-first onto a German police van.

Looking back on my first two weeks at the World Cup, I continually smile at how easy it has been to start conversations with strangers from not-so-strange lands. Granted, it helps to be able to say the name Bastian Schweinsteiger (a young, talented German midfielder) with the verve and excitement of a 12-year-old. But you have to credit soccer -- like no other sport in the world -- for the goodwill. Sure, there's an aw-shucks quality to it, but then again, Americans are supposed to be good at this sort of thing. Now all we need is a domineering defensive center-mid and we're back in business.