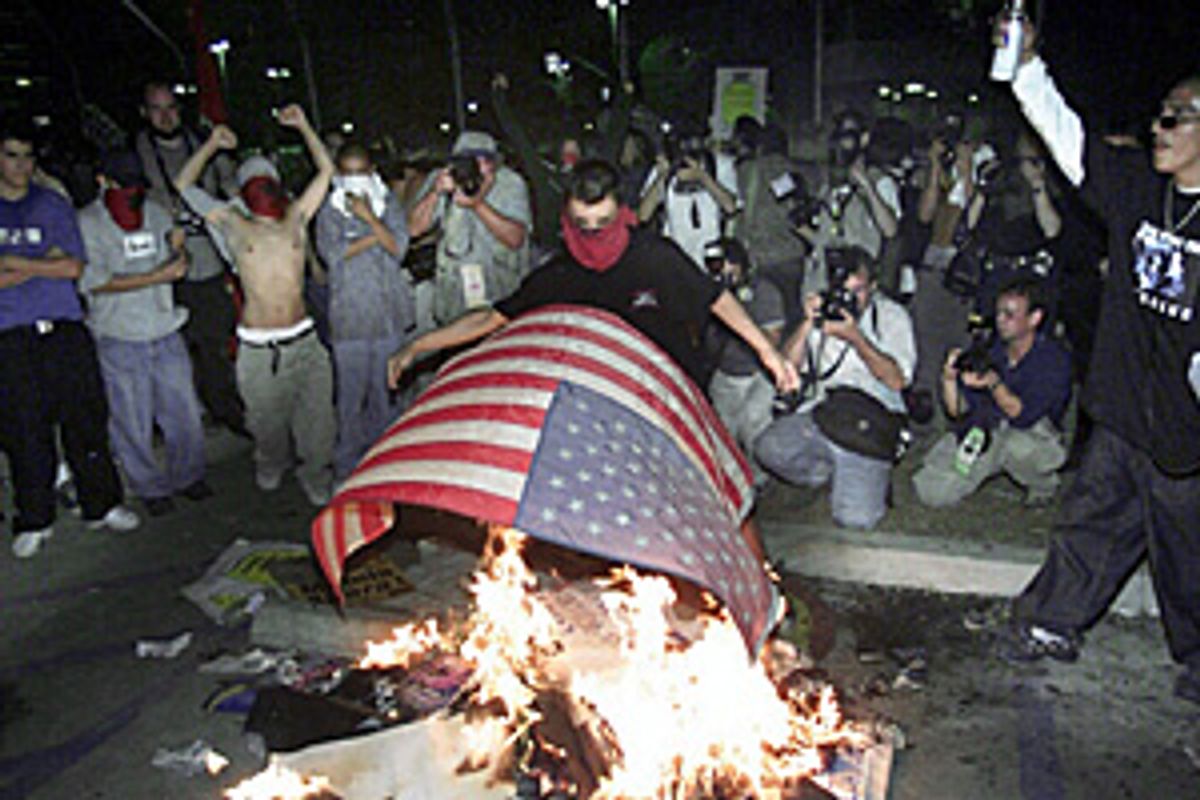 If only for a cigarette lighter, Rick Monday would have gone down in history as just another above-average baseball player, a left-hander who peaked with a 32-home-run season. But on April 25, 1976, two bell-bottomed protesters jumped the outfield fence at Dodger Stadium and streaked onto the field with an American flag, a bottle of lighter fluid and a pack of matches. The first match didn't light. By the time they got the second match going, Monday had run over to snatch the flag away, making his mark as the slugger who saved the Stars and Stripes.

Thirty years later, it is politics as much as patriotism that keeps Monday's achievement in the headlines. Senate Republicans have been treating him like a war hero in recent weeks, passing a resolution to commemorate his courage and holding a Flag Day rally on the lawn outside the Capitol in his honor. The slugger brought with him the yellowed and tattered, but uncharred, flag he saved in Los Angeles, as six senators took their turn at a podium to praise Old Glory and memorialize the outfielder's spot decision. "It is arguably one of the greatest moments in the game," praised Sen. Jim Bunning, a Kentucky Republican, who played as a pitcher in the major leagues until 1971. "Like Rick, we should do everything we can to protect and honor our flag."

The festivities were not timed to celebrate the anniversary of Monday's flag swipe, which occurred months ago. Rather, Monday has offered himself as a poster boy for the latest attempt to pass a constitutional amendment to ban flag desecration, which by Senate tradition rears its head most summers to coincide with the Fourth of July. The debate is set to go to a vote as soon as Tuesday. "It must be that time of year," joked Wisconsin Sen. Russ Feingold at a Democratic counter-rally several hours after the Monday tribute. "The danger here, though, is that this one is close."

Real close. The current vote counts used by both Republicans and Democrats put the flag amendment within one vote of the two-thirds majority needed for passage -- the closest margin on this issue in the history of the republic. A total of 14 Democrats, including Minority Leader Harry Reid of Nevada and Dianne Feinstein of California, are expected to join 52 Republicans who support changing the Constitution to allow federal prohibitions of flag burning. A solid minority of senators, including Majority Whip Mitch McConnell and two other Republicans, are expected to hold back the tide. The House, meanwhile, has already passed the flag amendment, under the unlikely leadership of Jack Murtha, the Pennsylvania Democrat, and Duke Cunningham, a now-convicted California Republican.

Majority Leader Bill Frist claims to be optimistic. "There is a new spirit coming across the county," he told Salon after the Monday rally. "I think you can feel it in the last six months -- people coming together around the flag."

In public, Democratic leaders have scorned Frist's flag gambit as a sequel to the recent debate over a gay marriage amendment. "I think the Constitution is too important to be used for partisan gain," Sen. Patrick Leahy of Vermont said Monday, echoing his comments earlier this month on the marriage amendment. But with so much intra-party division, apparently the politics of the flag are far more complicated than marriage.

The biggest boogeyman for amendment supporters is not a Democrat at all, but Kentucky's senior statesman McConnell, a principled stickler when it comes to the First Amendment, as evidenced in his vocal opposition to campaign finance reform on free speech grounds. McConnell is also a rising star in the Senate, and is already preparing to take over for Frist as majority leader in January. "If he votes against it, he will be the 34th vote," said Daniel Wheeler, the president of the Citizens Flag Alliance, a pro-amendment lobby, who pointed out that the GOP long ago endorsed the amendment. "He will be the one that kills his party's platform."

To turn the screws, Wheeler's group has been trotting out Heather French Henry, a former Miss America from Kentucky, to publicly call for her senator's vote. "Senator McConnell has always said that he represents the people," she says, baiting him with poll numbers that show overwhelming support for the amendment in Kentucky. The Flag Alliance has also been blitzing an e-mail list of 8 million members to put pressure on Congress, Wheeler said, as well as spending money on glossy advertisements and pamphlets. He added, "If we had taken the $25 million we spent and put it in paper bags and spread it around Congress, this issue would have been over a long time ago."

The biggest political danger for Democrats stretches beyond the coming midterm elections. If the amendment passes the Senate, each of the 50 states will be asked to debate the merits of the flag, potentially driving voters to the polls for years to come. And it would likely be a more burning issue for card-carrying Republicans: Polls show that urban and minority voters -- the Democratic base -- are far less likely to support a flag amendment than most Americans. "It could become a much bigger political problem" for Democrats, said Terri Ann Schroeder, a senior lobbyist for the American Civil Liberties Union. "In terms of advocacy and in terms of politics, the dynamic becomes much more intense."

Most Republicans have made no secret of their desire to thrust America into a full-fledged debate over a form of protest that went out of style before the Bee Gees fell off the charts. Sen. Orrin Hatch, who represents Utah, has been crowing about a chance for the states to "have one of the best debates on virtue and on the principles this country was founded on." Hatch has also linked flag burning to the scourge of liberal judges, which remains one of the best issues for the unpopular Republican Congress. "Five unelected activist jurists changed the law," Hatch said at the Flag Day rally, referring to the divided 1989 Supreme Court decision that struck down federal laws against flag burning. Hatch, of course, did not mention that one of those "activist jurists" was arch-conservative Antonin Scalia.

But Republicans are also struggling to deal with the current trends in flag desecration. In recent years, public reports of flag burning have become far less common than fatal lightning strikes. This has driven Sen. Bob Bennett, the junior Republican from Utah, to oppose the amendment. "It's a non-problem," Bennett told Salon, in a statement. "The only time people burn the flag is when this amendment comes up."

Bennett has signed up Hillary Clinton, the 2008 Democratic front-runner, with a compromise, third-way bill that would try again to make flag burning illegal without modifying the Constitution. (There is considerable debate over whether the Bennett-Clinton bill could sustain court scrutiny.) Another prospective Democratic presidential contender, Sen. Evan Bayh of Indiana, is supporting the amendment. California's Feinstein, meanwhile, who served as the mayor of San Francisco in the 1970s, is an amendment supporter and has argued that flag burners can find other ways to express themselves. In a recent USA Today editorial, she wrote, "There is no idea or thought expressed by the burning of the American flag that cannot be expressed equally well in another manner."

Such pronouncements clearly are not lighting a fire under the American people, with polls showing a steady decline in support for the amendment. In 1990, Gallup found that 68 percent of Americans supported the amendment. That number dropped to 55 percent in 2005, a measure that held steady in a CNN poll completed this month. Flag burning is not a red-hot issue for voters in general: A June Wall Street Journal/NBC poll found that only 4 percent of registered voters consider flag burning one of the two most important issues in this year's election. By contrast, 53 percent identified the Iraq war and 32 percent mentioned illegal immigration, while on social issues, 21 percent of voters ranked abortion as a top issue, and 16 percent named gay marriage.

All this may make Americans wonder why the Senate is now closer than ever to forcing another round in the 1970s culture wars. There are, of course, other landmark moments from baseball that could be lionized on the Senate floor. The Senate could, for instance, commemorate the no-hitter that Dock Ellis, a Pittsburgh Pirate, threw on June 12, 1970, while frying on a cocktail of purple haze acid and amphetamines. And there is that memorable day during spring training in 1973, when Yankee pitchers Fritz Peterson and Mike Kekich announced they would be swapping wives -- for good.

LSD and marital swinging, like flag burning, have been in decline ever since the Vietnam War. But then no politician ever got elected by promoting psychedelics or key parties.