"The Unfinished Novel and Other Stories" 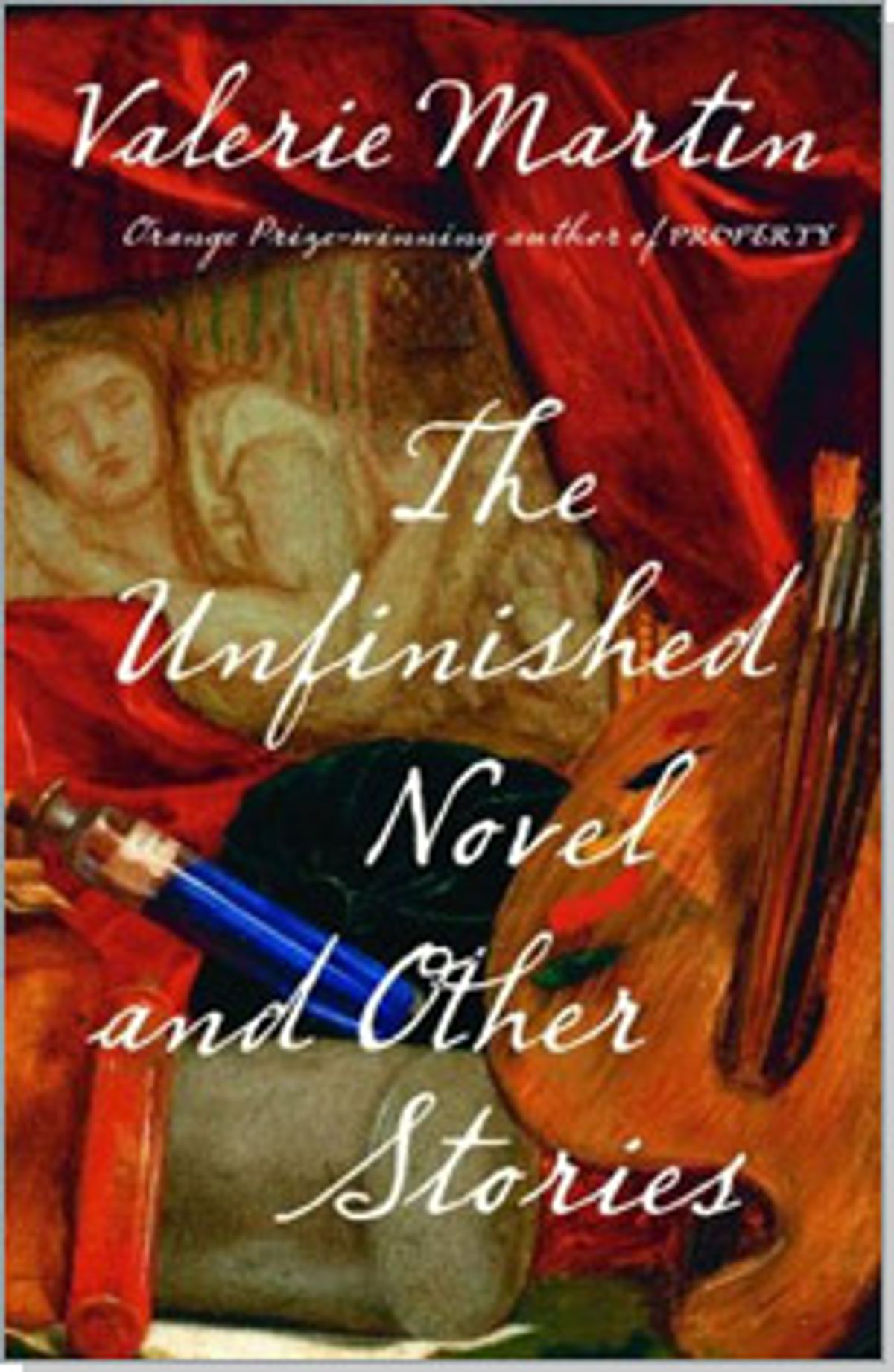 The first thing that must be said about the stories in Valerie Martin's new collection, "The Unfinished Novel," is that they have endings. They don't simply stop, on a vaguely evocative note, leaving their readers to ponder just what the author is trying to get at. Martin is such a serenely confident author that she's not afraid to be obvious, which is not to say that her stories are obvious. The short story is a form that doesn't allow for the layered complications of the novel, and unless a writer really knows how to make all the components work overtime, it can seem pat. Since most writers don't know how to do that, they shy away from anything too direct or definite, in the hope that hinting rather than telling will make the results seem deep.

The endings to Martin's stories are so strong that you aren't left scratching your head, but the more you think about these short fictions, the more their meanings multiply. In the title story, Maxwell, a novelist of middling success, returns to his native (pre-Katrina) New Orleans for a visit, and runs into Rita, an ex-girlfriend who's done him wrong. She's lost her looks, lives in a hovel and tries to get him to persuade a local gallery owner that the pottery shards scattered throughout her reeking apartment are ancient Native American artifacts that she picked up "from the Zuni ... I'm the only white woman they trust." But the real focus of his dread is the novel she was working on back when they were both writing students in Vermont; it was good enough then to have evolved into a better book than anything he's written -- that is, if she's finished it.

Maxwell comes up with a satisfying solution to the dilemma Rita dumps on him, but the story is also teeming with other elements that blossom under consideration -- the neglected feral cats in Rita's neighborhood vs. Maxwell's own cherished pet, the swampy confusions of New Orleans vs. Maxwell's sober life as self-made Yankee, Rita's lurid, preposterous account of her adventures post-Maxwell. All of these feed into the mystery that plagues Maxwell: Has she ever given him anything of value? His final response to Rita's provocations works both as a kind of acerbic joke and as an acknowledgment that this is one question he just can't answer.

Another story, "His Blue Period," is told by a painter who resents an egomaniacal colleague. He envies not only the other man's talent and success but also his lover, a beautiful, self-sacrificing former dancer. As the narrator tells it, the misery in the story is the direct result of his rival's unflappable sense of entitlement and the irritating fact that the man really is a superior painter. But the ending neatly flips the story, suggesting that the narrator's willingness to accept his own second-rate status has done more damage than anything else.

All of the stories in "The Unfinished Novel" are about artists -- painters, poets, novelists, actors -- and so the enigma of talent looms large in their lives. How much of it do they have, and what are they willing to sacrifice in order to husband it? What kind of life feeds an artist's gift, and do they really want to live that life, could they even recognize it if it were offered to them? In "The Open Door," a poet seems to be staggering under the demands of her volatile lover, a woman who gets her into trouble at work, belittles the poet's "bitter, hateful poems," flirts shamelessly and insists that they leave the New England university where the poet has tenure and move to Rome. The ecology of this relationship, like most of those depicted here, is not what it seems; by the end of the story, the lover's seemingly inconsiderate disruptions are poised to save the poet's life.

Martin likes irony, of the full-fledged, classical variety. What appears to be the case very seldom is, and what her characters profess to love or hate is often the focus of far more mixed emotions. This comes combined with a steely frankness about people's motivations, as when Maxwell considers becoming the champion of Rita's novel, and muses "the public eats that stuff up: the fantasy that artists -- unlike, say, businessmen -- are driven by warm fellow feeling. In their devotion to the religion of art, they are ever seeking, without self-interest or crude competitiveness, to celebrate genius wherever it can be found. There wouldn't be any money in it for me ... I might get some interviews out of it."

As a result, Martin's stories have a considerable bite -- not quite as sharp a bite as her Orange Prize-winning novel "Property" (2002), but then few books have the cool, pitiless ferocity of that one. Yet none of these stories comes across as bitter, cold or purely satirical; every character in them feels entirely, if sometimes distressingly, human. What Martin shows us about the way artists behave isn't pretty, but the quiet artistry evident on every page of "The Unfinished Novel" is nothing less than awe-inspiring.