Bush? Never heard of him

Desperate to appeal to voters but fleeing from an unpopular president, Republicans are embracing jingoism, nativism and even Jim Crow. 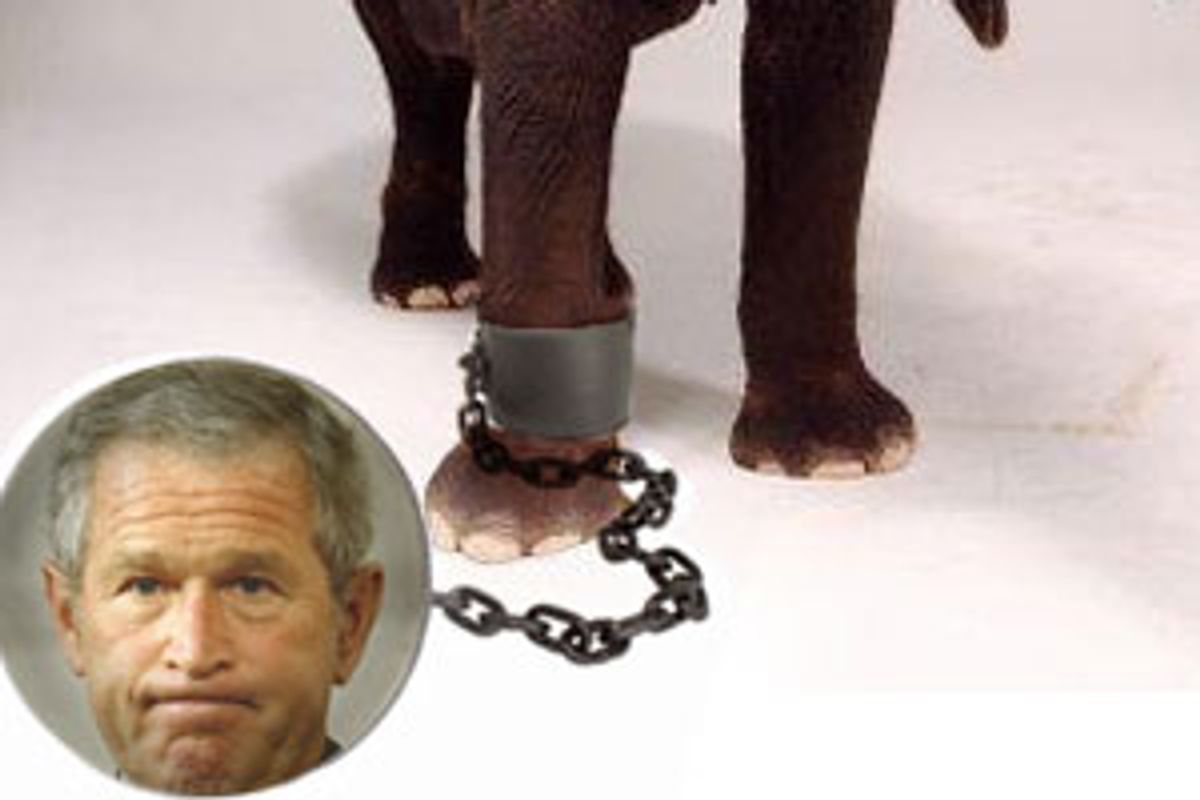 President Bush's effectiveness as a domestic president is ending not with a bang but with a whimper. Almost four months before the midterm elections, congressional Republicans fear an association with him might alienate their constituencies and result in a loss of the House of Representatives. They hold the House by only 15 seats and suddenly even previously safe districts are at risk. Just a month ago Bush delivered a nationally televised address on immigration, urging Congress to provide for eventual citizenship for the more than 12 million illegal immigrants in the country (the pro-business position). He convinced the Senate, but the House refused to budge from its punitive position to criminalize any assistance to illegal immigrants.

The White House had hoped that the killing of terrorist Abu Musab al-Zarqawi would reverse Bush's slide in popularity. Indeed, there was a slight bump upward of several points. But this is a classic epiphenomenon that has already started to wither.

From the vantage point of Capitol Hill, the most salient factor is that Bush's evanescent Zarqawi "recovery" has failed to cast any glow onto Republican prospects. Enforcing party discipline for a purely political congressional vote last week that endorsed Bush's policy in Iraq, such as it is, has barely quelled panic. Even as Bush briefly nudged up ever so slightly from the low to mid-30s, Republican candidates fell further behind in the polls. For Republicans, Bush has become cement shoes.

Two recent near-death experiences have desperately frightened Republicans. In a June 6 by-election to fill the seat of the corrupt and imprisoned Republican congressman Randy "Duke" Cunningham in suburban San Diego, one of the safest Republican districts in the country, the Republican narrowly held on only through demagogic appeals against immigrants. Then, in Utah, in an even safer Republican district, the state party denied endorsement to Rep. Chris Cannon, a Republican with a 100 percent American Conservative Union voting record, because he had made the mistake of supporting Bush's immigration plan. On Tuesday, Cannon edged out a primary challenge from an anti-immigrant activist who insisted he was battling "Satan."

Southern Republicans picked this moment to stall the extension of the 1965 Voting Rights Act that had been enacted after a century of African-American disenfranchisement in the South. Their ringleader, Rep. Lynn Westmoreland of Georgia, is also the sponsor of bills that would require the display of the Ten Commandments in the House and Senate as well an of amendment to the Constitution to justify these sorts of displays. On June 14, he ventured forth to explain his proposals on Comedy Central, where comedian-interviewer Stephen Colbert asked him a trick question, "What are the Ten Commandments?" "You mean all of them?" Westmoreland stammered. "Um. Don't murder. Don't lie. Don't steal. Um. I can't name them all."

In the Senate on Tuesday, Republicans staged a daylong debate on a constitutional amendment to ban flag burning. Senate Majority Leader Bill Frist proclaimed the issue nothing less than a "crisis": "Enemies of American freedom abroad are well aware of the ideals emblemized by the American flag." The measure failed by one vote to attain the necessary two-thirds majority.

So far this year, according to the Citizens Flag Alliance, there have been four incidents of flag burning, whose evildoers have been not a single al-Qaida suspect but the usual rowdy small-town teenagers. One of the most notable cases of 2005 occurred last July 4, after midnight, when an 18-year-old in Maryville, Tenn. (population 23,000, located in Frist's native state), burned a flag in a neighbor's yard and was arrested after the police detected "beer cans 'all over the property and in the street,'" according to the local newspaper. The Associated Press reported, "His father said the teenager 'has no reason for anger against the United States' and could easily have ignited a garbage can instead of a flag." The lad was jailed for nine days.

While the Senate was consumed debating the flag-burning amendment, Rep. Mark Kennedy, the Republican Senate candidate in Minnesota, was removing every mention and likeness of Bush from his campaign literature and advertising. As the Republican cultural warriors march into the midterm elections, they are unfurling nativism and jingoism as their banners, and some are even raising the shadow of Jim Crow. The unpopular conservative president is the emblem they seek to hide. Only by suffering slights from Republicans can Bush hope to escape a Congress led by Democrats that would cast sunlight on his remarkably secretive and unaccountable administration.