In a major rebuke to the president's draconian tactics, the court rules that secret military tribunals for terror suspects fundamentally violate U.S. and international law. 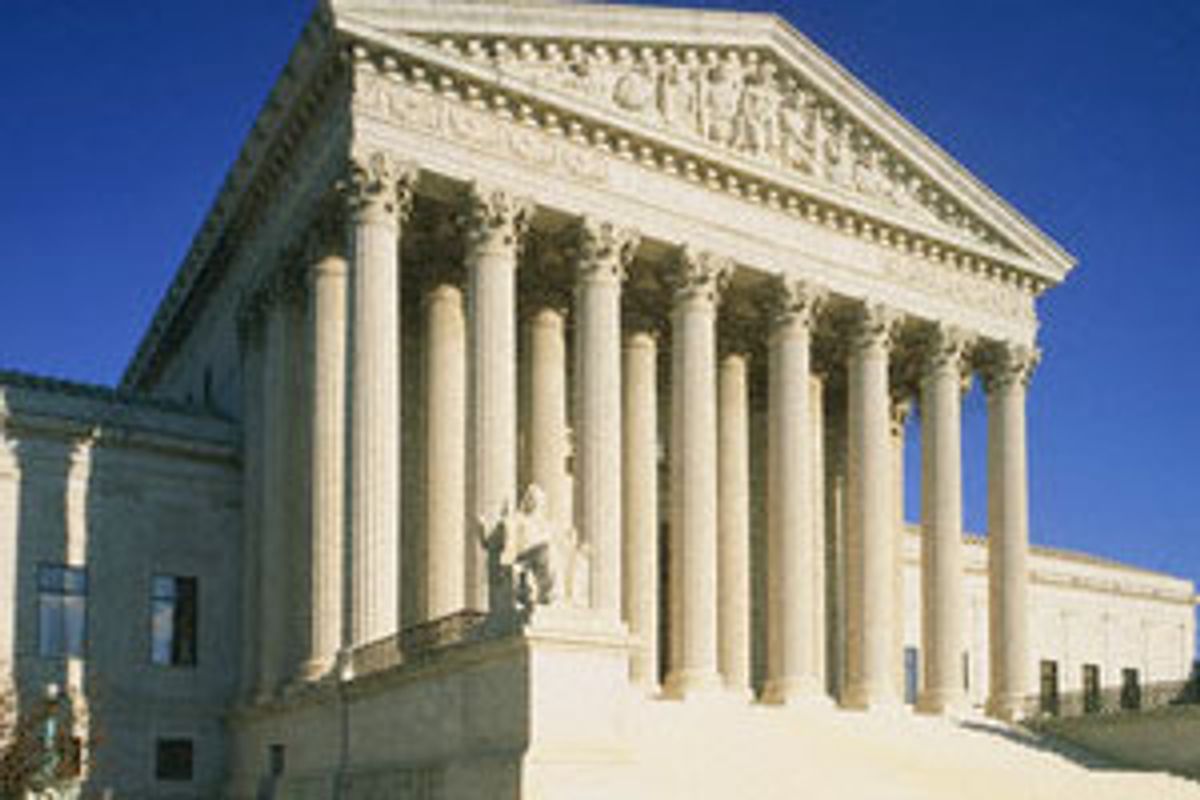 It remains one of the most chilling public statements by a senior Bush administration official. Testifying before the Senate Judiciary Committee in December 2001, Attorney General John Ashcroft blustered, "To those who scare peace-loving people with phantoms of lost liberty, my message is this: Your tactics only aid terrorists -- for they erode our national unity and diminish our resolve. They give ammunition to America's enemies and pause to America's friends."

Ashcroft's inflammatory claim that civil libertarians were arming al-Qaida came on a day when the attorney general had the unsavory duty of defending the administration's initial rules covering military tribunals. Now four and a half years later, the Supreme Court's end-of-the-session decision in Hamdan v. Rumsfeld both rejected these military tribunals and quickened the hearts of civil libertarians.

Read narrowly, the court's ruling applies only to the roughly 450 prisoners held at Guantánamo. In fact, Thursday's decision does not even guarantee any kind of trial for these detainees. As Justice John Paul Stevens noted in his majority opinion, "Hamdan does not challenge, and we do not today address, the Government's power to detain him for the duration of active hostilities." Yet such a gimlet-eyed interpretation may be the equivalent of believing that Brown v. Board of Education applies only to schools in the greater metroplex of Topeka, Kan.

It is possible that Hamdan may someday be seen as the turning point in repudiating the Bush-Cheney view that all branches of government are equal but some are more equal than others. An optimist could find persuasive evidence in the decision that the Supreme Court was, in effect, saying to the White House: "Enough of your cockamamie theories about the all-powerful president in wartime. Enough of your cloud-cuckoo readings of the resolution that Congress passed after Sept. 11. And enough of your cataclysmic claims that the war against al-Qaida requires a wanton disrespect for international law and the norms of civilized behavior."

Of course, the Supreme Court tends to be more Delphic than direct. Any quick-off-the-mark interpretation of Hamdan should be regarded as the first rough draft of legal theory rather than settled jurisprudence. This complex 5-3 decision was still being read in detail by the law professors and legal scholars who were simultaneously being asked to comment on its meaning.

Probably the most compelling passage in Stevens' opinion is this four-word sentence: "That reasoning is erroneous." The octogenarian justice was rejecting the government's cherished argument that not one syllable of the Geneva Conventions applies to alleged al-Qaida captives at Guantánamo. Stevens held that, at minimum, Hamdan and his companions on the American-held tip of Cuba are covered by the portions of the Geneva Conventions that regulate the treatment of prisoners in civil wars and similar conflicts.

Marty Lederman, a Georgetown law professor who contributes to SCOTUSblog, was among the first to grasp the implications of the Geneva Conventions portion of the opinion. As Lederman recounted in a Thursday afternoon interview, "When I saw it, I thought it was the big kahuna." Under Lederman's reasoning, if al-Qaida members are covered by at least portions of the Geneva Conventions, as the opinion confirms, then so would be American soldiers and CIA operatives. Not only do these treaties set fair-trial standards for military commissions, but they also (much to the horror of Cheney and company) mandate the humane treatment of prisoners.

"After today, any waterboarding will open you up to a possible war-crimes prosecution," said Lederman, who served in the Clinton and Bush Justice Departments. He expressed the tentative view that Thursday's decision probably could not be used retroactively to punish anyone for employing extralegal interrogation techniques. But Lederman added, "I wish I could see the memos that are going out today from the CIA to the field."

In the Hamdan decision the court also vigorously dismissed the claim that Congress had already ceded to the president any power he wants to assert under the guise of battling al-Qaida. Jeffrey Rosen, a law professor at George Washington University and the author of "The Most Democratic Branch," a just-published portrait of the Supreme Court, said, "They completely rejected the notion that the president can do whatever he likes because of the post-9/11 'Use of Force' resolution."

Significant as this ruling is, decisions like Hamdan do not by themselves instantly transform behavior as if they were a fiat from Mount Sinai. Their broader implications are bound to be tested in the courts and challenged by the administration. If Congress and the voters lack the political will to act on the Hamdan precedent, then Thursday's decision will probably be remembered as a momentary flicker of judicial independence in the era of a "laws only apply to little people" presidency.

But, for the moment, the Supreme Court in its robed majesty has rebuked the White House. As Michael Posner, the president of Human Rights First, put it, "They challenged the global notion that there's war and that there's law -- and that war trumps law."

The court has played its trump card. Now the question remains: Who will follow suit?