Louisiana is still devastated, and its people -- black and white, rich and poor -- feel like the rest of the country doesn't care. 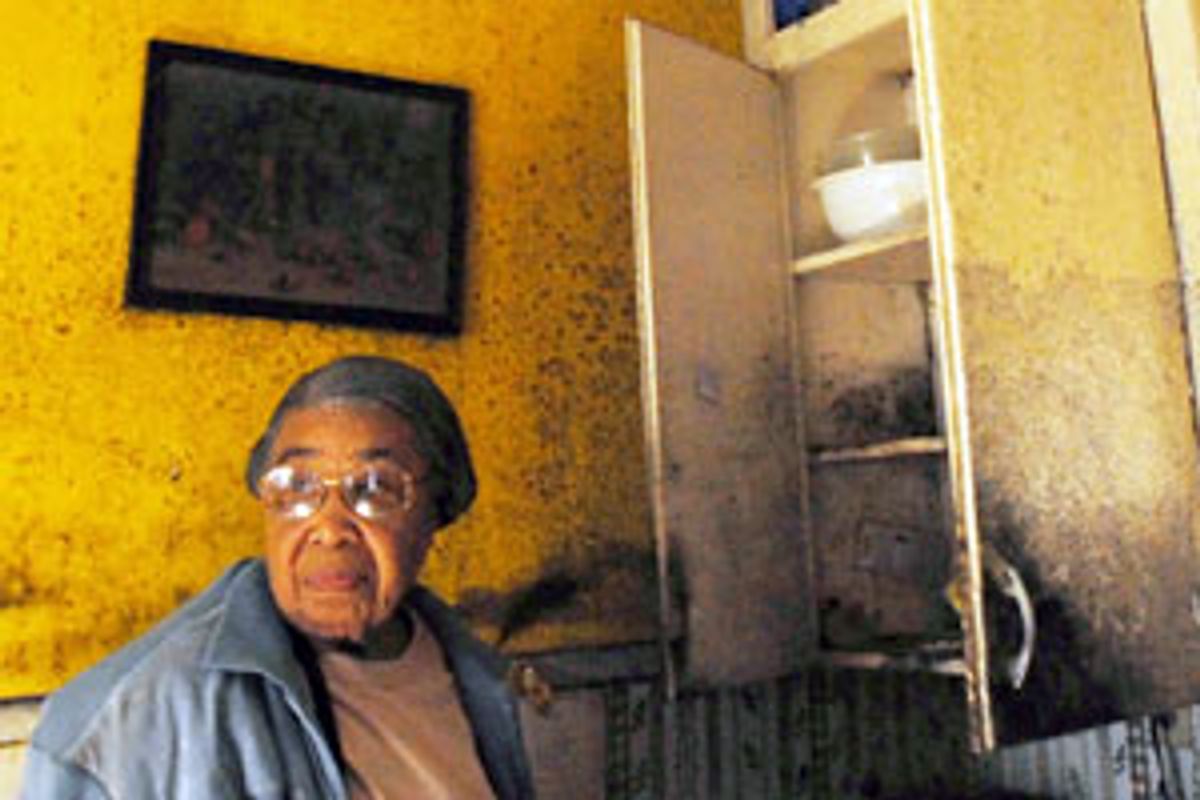 This week about 17,000 librarians and exhibitors from around the nation gathered in New Orleans for the American Library Association annual conference. It was the first large-scale convention from a national organization to return to the city that was once a prime choice for mass gatherings that allow people to talk work all day and then party all night.

But, of course, the partying is subdued these days in New Orleans. The French Quarter is open for business, music cascading from open bar doors, the smells of spicy food mingling with shouts and laughter. The city is so grateful for this convention that welcome banners hang everywhere, saying, "We're jazzed you're here!" (And in many souvenir shops, newly printed T-shirts proclaim, "Librarians Do It by the Book! ALA 2006.")

And nearly a year after Katrina, many parts of the city are still utter wastelands, streets full of cars and boats and debris but completely empty of people, and even the historic shutters that once shielded windows from hurricanes are being scavenged and stolen and sold from houses where no one expects to return. It was true -- unless you've seen it, and smelled it, you can't truly understand.

I was there in Louisiana to speak to librarians, as my new novel is set in the state during the early 1800s. Inside the Ernest N. Morial Convention Center, once the site for some of the most shameful and frightening sights American saw on TV after Katrina, thousands of librarians discussed books and technology and testing and literature.

But to get there, as hundreds of us were stranded by bad weather in Houston, I flew to Lake Charles, La., rented a car and drove across the state in the middle of the night. On the flight, I sat next to Andrea Austin, who is a third-generation native of Lake Charles. She remembers being 2 years old during Hurricane Audrey, in 1957, and watching floodwaters approach her grandfather's pharmacy on high ground. Many Americans, focused on the devastation of Katrina, have forgotten that Rita bashed the rest of the state with equal force. Trying to explain to me how Cameron and Calcasieu and other parishes were devastated by Rita, and now feel forgotten, Andrea, an executive for Budweiser, gave me a stark sentence. "I had 110 accounts in those parishes before Rita. Now, nearly a year later, I have one."

Of all the restaurants, markets, liquor stores, bars and groceries she served, only one has reopened -- the Hackberry Market, she said, incredulous.

Her own house was damaged, with a huge tree crushed into three bedrooms. Everyone she knows had wind or water damage. But no one can get contractors, or supplies, to repair homes or businesses, because with no stores, no schools, and no rental housing, where would contractors or low-wage workers live? Her roof was finally repaired last week.

The Lake Charles airport sustained so much damage that terminals are housed in tents, and the car rentals in trailers. Andrea Austin told me she wasn't sure where I could get food, as many restaurants are only open two nights a week, because there are so few workers.

She was the first of many who mentioned how thousands of people still in Houston or San Antonio or Dallas may not come back. She was the first who told me she thought her state was being depopulated by way of neglect and indifference.

In New Orleans, I heard the same stories, from people of all races, ages, economic backgrounds, and temperaments. Some thought the indifference was purposeful, the neglect not benign.

Steve Alfonso, a limo driver and resident of the city since 1952 when he emigrated from Cuba as a boy, is living in a FEMA trailer in Kenner, in the yard of his damaged home. He is frustrated by his inability to repair his home, which suffered wind and water damage, though less than that of others. "Who would have thought one-eighth of an inch would make a difference?" he said. "That meant the water from my property flowed down to my neighbors." Still, his house is unlivable, and he lost his business. "It seems like this is just an opportunity for people to rip us off."

Another driver, who lives across the bridge in Gretna, had a tree damage his house and rental, and has been living in his kitchen since August, since his insurance company has refused so far to pay. "You wait and wait, they offer you a tiny little amount, and then they shrug and say you can file a supplemental claim and wait another six months. They're really hoping you give up and leave."

"We have no electricity, no water," others told me. "They just opened a store last week in my neighborhood, and a lady was holding a bag of chips and crying. People were just walking around her and nodding, because they understood. We haven't been able to buy food."

That first night, walking the streets and listening to people who found out I was from California and wanted to tell their stories, as if we were in a war zone from which only I would eventually escape, I realized that they felt completely abandoned in a way I can't imagine.

I am from a state where fault lines run everywhere -- where earthquakes have destroyed cities that were then rebuilt, where wildfires obliterate communities nearly every year, where mudslides take out houses in upscale beach towns again and again. In California, people are reimbursed by insurance companies, and then they rebuild in the same places, over and over. La Conchita, buried by mud in a horrific slide in 2004, will see new homes on the same slope. Scripps Ranch and other San Diego neighborhoods erased by wildfires in 2004 have already risen from ash. The Oakland hills, devastated in 1991 by one of America's most costly and destructive fires, are covered with houses again.

All over America, people rebuild homes that lie in tornado paths, on fault lines, near levees and rivers and dams, in forested areas prone to periodic wildfires. How can it be, these Louisianians asked me, with fury or fervent prayer or sighs of resignation, that our state and people are worth less to the country? "We don't feel like Americans," I heard again and again, and I was reminded of the plaintive cries to television reporters during Katrina's floods -- "I'm a citizen of America! Not a refugee!"

I tried to visualize my own modest neighborhood in Southern California still filled with debris 10 months after an earthquake, still without power or water or markets or schools or libraries. And me, with my three daughters, in a small trailer. Nearly a year? And no one to even tow away the cars, or cut up the fallen trees?

What would help? I asked. "Someone needs to oversee this, like they finally did during the evacuation," one man told me. "Get somebody from the federal government down here to systematically figure out the insurance, the levees, the infrastructure. Because it's already hurricane season again. But it's like -- oh, it's only Louisiana. Do you think they'd treat California like that?"

I shook my head. Then I thought of another T-shirt hanging in a window in the French Quarter -- "Make Levees, Not War."

On my last day, the young waitress who had befriended me during breakfasts approached me hesitantly. She said, "Are you with the librarians?" I told her I was a writer. "Oh," she said, sounding disappointed. "My sister told me the librarians might be giving out books."

The way she said the word -- books -- was as if they were gold. "My daughter loves to read," she said softly. "But we don't have any books."

Tonia was from the Ninth Ward, and evacuated with her mother and daughter the day of Katrina. She was eight months pregnant, ended up in Dauphin Island, Ala., until last month, when she returned with her children to live in her mother's house in the Central Business District. She'd lost everything, and will never return to the Ninth Ward. But she's working at a hotel, as is her sister, and her daughter still loves words.

Only two of the city's 12 libraries are reopened. Most are listed as "devastated," and this week, hundreds of ALA volunteers are cleaning libraries and trying to restock. But it will take months, and if no one rebuilds in Cameron Parish, or in the Ninth Ward, whose children will read our books?

I told the exhibitors at Random House about Tonia's daughter. Her name is Natae. She is 9 years old. Random House sent a bag with 20 books for her -- everything from picture books to young adult paperbacks. Tonia had told me, "She'll read anything. Anything." I left the books at the hotel for her, and since then, I've wondered about their lives, and whether they liked the books. Natae must be like my own daughter, who cannot go a day without reading.

I thought about books themselves, the pages and covers and sentences. Several years ago, writers were told that books were becoming irrelevant, dying as a source of entertainment and solace. We were told that e-books and computer reading and even books shrunk to cellphone content were the way to come. But even with no electricity, hands can hold a book, and eyes can travel. When I was a child, only books offered escape into completely different worlds from my own, in the hundred-degree California heat, with ashes falling from the fires that burned every summer in the foothills near my house. As a novelist, I still feel the same way. Holding another universe in our hands, as I pray Natae is this week, is sometimes the only way we come to know one another. I became a long-distance lover of Louisiana through books, and I went there to write because there was no place like it on earth. After this week, it's clear to me that Louisianians wish the rest of America knew them -- their unique landscape and homes and work and voices -- well enough to not forget them.