It looks like an ordinary orthopedic back pillow -- but can a mail-order sex prop really set my fantasies free? 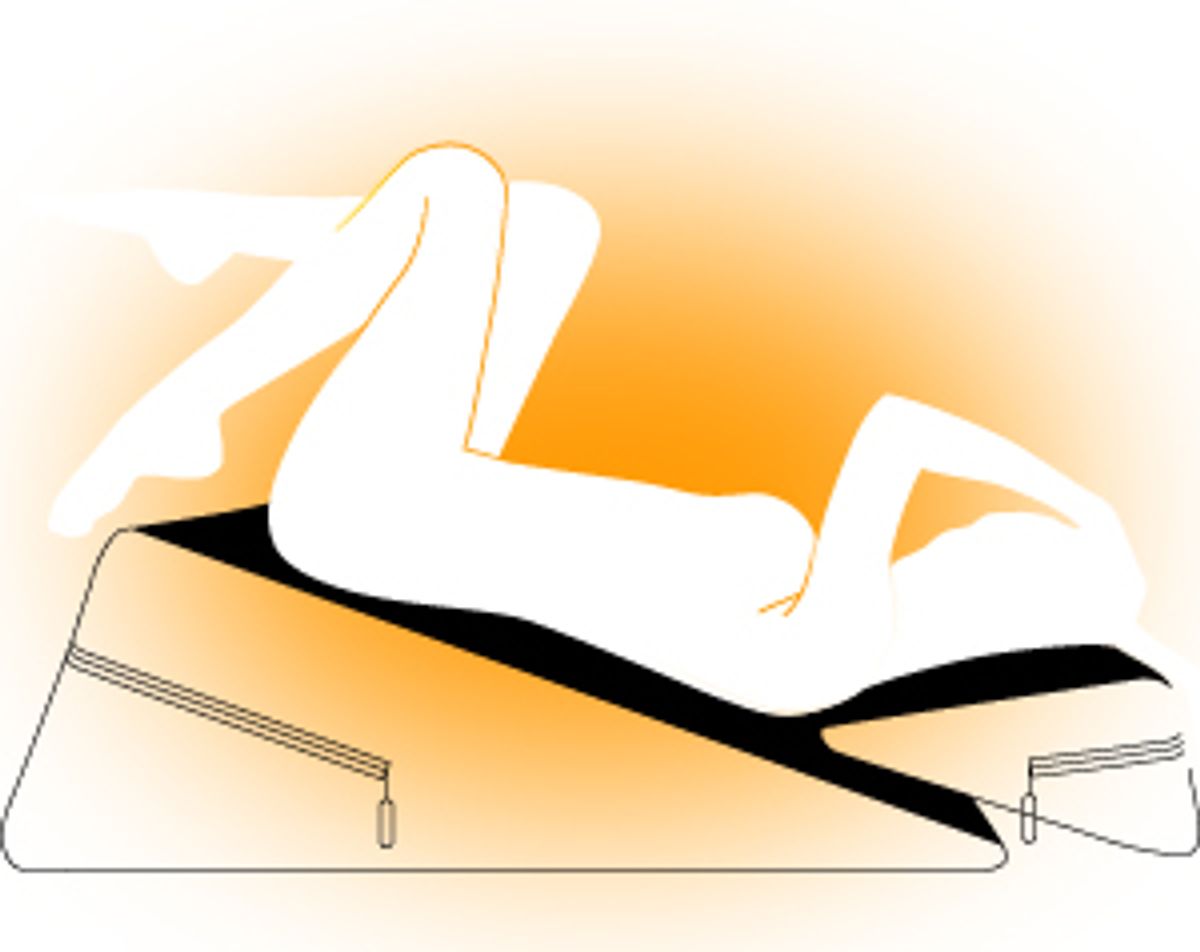 I'm not one for shortcuts and quick gratification. I still use dial-up, for God's sake. But no one with two children and a career can ever be completely immune to the seductive allure of efficiency. So when I got an e-mail from the company that makes Liberator "bedroom adventure gear," promising that its sexy line of cushions could "help a person more easily achieve and maintain a sexual position ... with less fatigue and stress," I greeted the news with an enthusiasm I usually reserve for Friday-night pizza delivery, and the same measure of hope for something fast and satisfying.

While these days, Americans may associate self-proclaimed "Liberators" with bungling maneuvers and an apparent inability to pull out, the Liberator Web site promises customers a different kind of emancipation. Essentially, the Liberator is a jazzed-up riff on an old trick: a bolster meant to give sex a boost. If you've ever shared a bed for more than sleep, you've probably employed pillows as props at some point. (Not to mention that it's nearly impossible to achieve certain positions during pregnancy without the extra leverage.) Nevertheless, most of us still regard our pillows as the place where our heads go. Liberators, on the other hand, go everywhere.

A few days later, after some inquiries to the company, a pair of innocuous, pyramid-shaped cushions arrived on my doorstep. But these were no bargain-basement Posturepedics; as the enclosed brochure explained, they're engineered to accommodate the weight of a body or two in motion. I chose a leopard print model because the solids looked too much like something you might find in the IKEA children's catalog. The "Wedge" was just a little bigger than a regular bed pillow, while the "Ramp" bore a striking resemblance to the wheelchair entrance of my building. There were other Liberator shapes to choose from, including the ottoman-like "Cube," the rocking "Scoop" and the curvy "Esse," all of which can be used individually or put together in Tetris-inspired combinations. But, frankly, there are only so many furniture-size sex props one apartment-dwelling family can accommodate.

After unpacking them, I jammed the cushions under my bed and began boning up with the handy position guide and accompanying DVD. The materials promised that with the "purpose driven pillow," "it's not a vagina, it's wonderland." And the photos, of a smiling couple engaged in positions like "Mama likes to mambo" and "Mister plow," had an almost wholesome sheen. I wanted ecstasy, I thought, not Six Flags. But selling liberation, it seems, requires subtlety.

"We're a mainstream brand; we don't follow the adult trends," says Louis Friedman, who co-founded the Liberator company three years ago. Instead, he demurs, "we're a cushion." It's a brilliantly nonthreatening approach, aimed cleverly at the monogamous, exhausted masses. Although it doesn't take a Caligula to guess how handy something that enhances rear entry and oral sex might be for a colorful variety of customers, the Liberator literature features strictly one-on-one, hetero activities.

After letting them languish under the bed for two weeks, finally, one relatively unstressed evening, my husband and I were ready to take the wedges for a spin. There may come a day when I've mastered the art of sexily tugging an overstuffed polygon out of the dust bunnies, but that day has not yet come.

Working on the principle that bigger is better, I first leaned back on the Ramp. I felt like a sexed-up Cirque du Soleil performer, ready for new heights of gymnastic transcendence. "How do you feel?" my husband whispered, rubbing up against me. "Like I'm going to fall off," I muttered, clutching the precipice. But I wasn't in danger; it turns out the Liberator's cover is microfiber, which makes it both soft and Velcro-y. I half expected to make a ripping sound as I skidded off. And for the record, that baby is steep.

The whole production was a little awkward, but at least I was getting a different view. I'm not having a lot of spontaneous, wild sex on the kitchen floor these days. Or on any floor for that matter. What I never fully understood until I became a parent is that your kids aren't just your kids, they're your roommates. Roommates who don't grasp the significance of, say, a tie on the doorknob.

"It's sex by appointment," says Friedman. That's not necessarily a terrible thing -- really, what is dating, after all, but sex by appointment? It just entails certain scheduling and geographic constraints. "When you're married with kids, you're typically restricted to the bedroom," Friedman tells me. "We're building out the bedroom as a lovescape." (Customers who want to take their trips up a notch can try the company's mats and "Black Label" line of restraints.) It's a smart strategy -- indeed, if my sex life is going to be confined to one small room, after the hour of 9 p.m., I want to make sure I'm getting the most bang for my buck. Literally.

Determined to give the Ramp a successful stress test, I tried a new position, easing myself facedown onto the cushion and letting gravity work its mojo -- a move the guide refers to as the "moon rover." As my husband knelt behind me, I thought, Now we're on to something. After a while, though, I was mostly just antsy to try something else. "You get on it," I commanded, and climbed astride him. Each new maneuver we tried was pleasant enough, but not the mindblower I'd been wishing for. It was more like making love with a third party in the bed. A big, fat, hunk-of-cheese-shaped third party.

Maybe we needed to scale down. I tossed the Ramp on the floor, where it obscured the rest of the bedroom, and reached for the Wedge. The Wedge is small, friendly and unimposing, with a manageable 27-degree angle. I slid it beneath my posterior, propping myself up for some slightly elevated missionary-style high jinks. And here's what I learned: There's something pretty sweet somewhere in those angles. It felt good. Really good. Efficient, even. Mere moments later, my husband observed, with more than a touch of understatement, "So, that seemed to work out OK for you." At least I think it was something to that effect, because I was already half-asleep.

As with so many things in life, sex with the Liberator seems to come down to perspective. A little shift in angle makes things feel a little deeper, a little bigger, a little easier to hit the good spots. Subsequent experiments have proved less spazzy, less imperative driven. Basically, the props let me feel lazy and adventurous at the same time, which is my ideal state of mind. How good is the Liberator? I've probably had hotter sexual adventures with the aid of tequila, but this fits my current lifestyle better.