Kenneth Lay: Not the first to cheat the Big House

Experts say the stress of federal prosecution can lead to disease and suicide, especially for the well-heeled likes of "Kenny Boy." 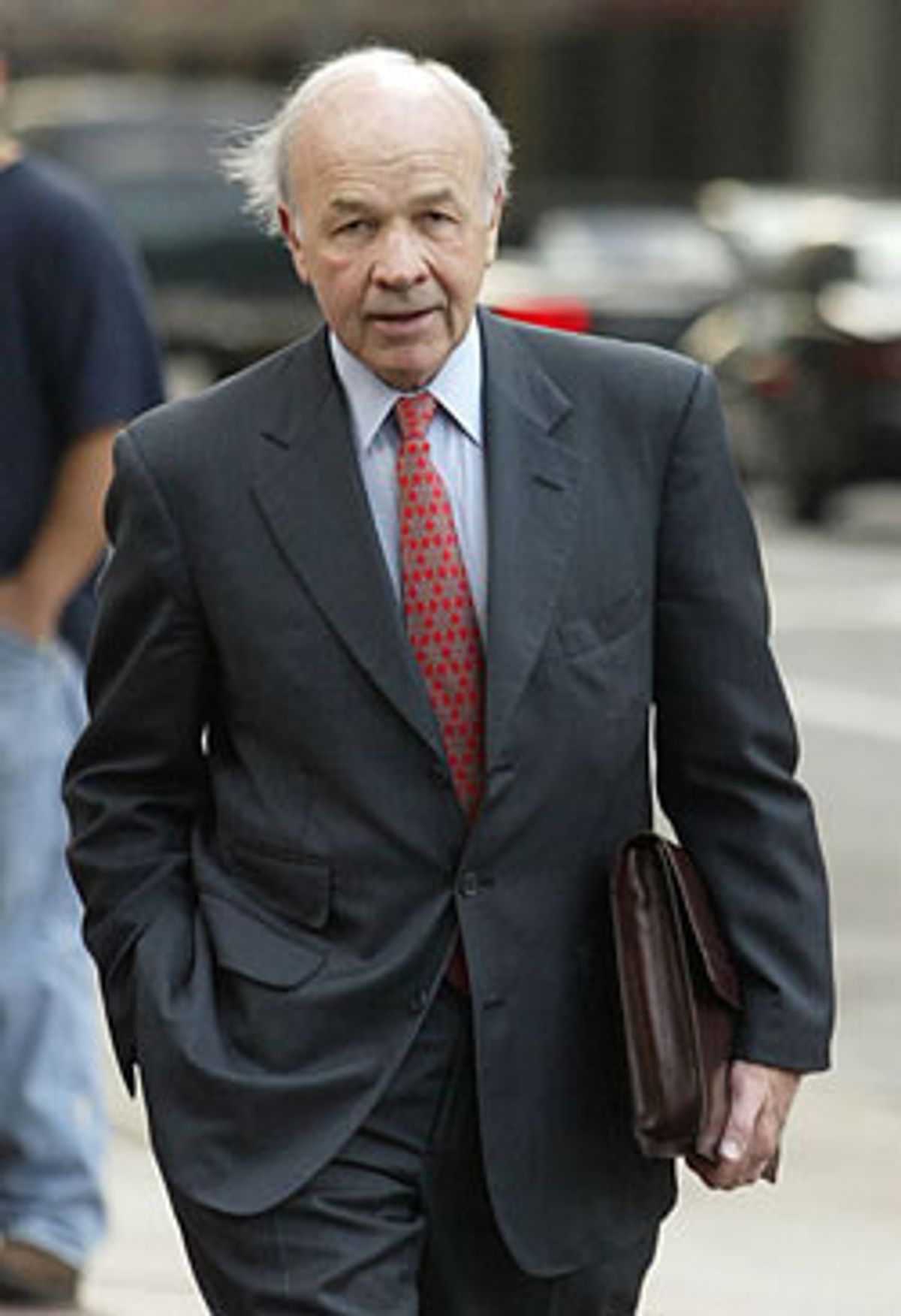 Jul 05, 2006; Houston, TX, USA; Former Enron Corporation President & CEO KENNETH LAY, 64 died of an apparent massive coronary in Aspen Colorado on the 4th of July 2006. Lay was found guilty on 10 counts of fraud and conspiracy related to the collapse of Enron, the energy company he founded that eventually grew into the nation's seventh largest company before it imploded after an accounting scandal. Lay was scheduled for sentencing on Oct. 23, 2006. FILE PHOTO: Apr 6, 2006; Enron former chief executive Jeffrey Skilling and founder KENNETH LAY were found guilty Thursday of conspiracy and fraud. Skilling was found guilty on 20 counts of conspiracy, fraud, false statements and insider trading. He was found not guilty on eight counts of insider trading. Lay was found guilty on all six counts of conspiracy and fraud. Pictured: Former Enron CEO KENNETH LAY arrives at the Bob Casey Federal Court House for day 36 in the Enron trial 6 April 2006 in Houston, Texas. Mandatory Credit: Photo by James Nielsen/ZUMA Press. (Â¬Â©) Copyright 2006 by James Nielsen (James Nielsen)
--

Those sympathetic to Ken Lay might think his sudden death of a heart attack on Wednesday morning has saved him from a miserable existence. The architect of the biggest corporate fraud in U.S. history died four months before his sentencing on 10 counts of corruption. With a sentence nearly certain to top 25 years, the 64-year-old Kenny Boy was destined to die behind bars.

Those less favorably disposed, like perhaps some of the 5,600 Enron employees who lost their jobs and $2.1 billion in retirement savings, may feel they were cheated of justice, and wonder if Kenny Boy somehow willed himself to dodge the embrace of federal prison. There is no suggestion of suicide, and results of an autopsy should be available later this week. But just how common is it for defendants like Lay to exit the scene with such good timing?

There are statistics on how many prisoners die in prison, but none on how many defendants die before they get there. "It's nobody's job to count them," says Marc Mauer, executive director of the Sentencing Project. "I'd be shocked if anybody kept those records."

Mauer also says, however, that he wouldn't be surprised if there were plenty of stories about defendants developing serious health problems as sentencing and incarceration approach. "I would imagine that would be more so for somebody who never thought they'd go to prison."

The kind of people who never imagined they'd go to prison have spawned a cottage industry of consultants. For a high price, they coach white-collar criminals like Martha Stewart on how to do their time. A quick survey of these consultants reveals no trend of corporate felons dropping dead as prison beckons. "It happens," asserts Ed Bales, chief strategist at Federal Prison Consultants Inc., "but not to the extent you think it does."

As Mauer guessed, however, there are plenty of other stories to be told about ill health. The consultants confirm that it can be very stressful for well-heeled defendants to admit they're no longer in control of events, and the anxiety takes it toll on their health.

"The stress of a federal prosecution is a killer," reports David Novak, a federal white-collar prisoner turned prison consultant. He describes a series of peaks and valleys, with the anxiety building and climaxing three separate times -- first with conviction, then with sentencing, and finally with incarceration. The ride can be especially hard to navigate for former corporate executives. Their need to control the narrative can be so pressing that they take the witness stand in their own defense, as Lay did, so they can try to sway the jury, though defense attorneys would almost always prefer that their charges keep quiet.

Two of Novak's clients have committed suicide. One killed himself a week before sentencing, another after sentencing, 10 days before reporting to prison. "The second guy had had a particularly hard time accepting that the story was not going the way he thought it should go." Until his sentencing, recalls Novak, "he was still tenacious in the process, still convinced he could fix things."

None of Novak's clients have died of natural causes between arrest and incarceration, though many have turned to psychotropic drugs, and it's not uncommon for them to suffer from alopecia, i.e, sudden hair loss. The far more serious condition that apparently killed Lay, one frequently associated with stress, is also common. Says Novak, "I have had quite a few clients develop heart problems." He recently worked with a client who required multiple stents in his heart during adjudication. "Part of that might have been genetic, but part of that was federal prosecution."

Lay's autopsy results are likely to reveal nothing more remarkable than a similar run of genetic bad luck compounded by stress. Lay's father, Omer, suffered at least one heart attack. Absent a nationally infamous prosecution for fraud, he managed to live until 84.

But if Lay's death is pedestrian, the timing of it was stunning for other reasons. Because of his heart attack, his estate and his survivors may dodge the courtroom. The attorneys for the civil plaintiffs seeking a cut of his assets, meaning many of those 5,600 employees, now say they're going to have to wait before they decide to file suit. According to Clyde Platt of the Seattle firm of Hagens & Berman, "We have to decide whether or not continued litigation would serve any economic purpose." Because of Enron's collapse, there may not be sufficient money to recover.

Lay is also no longer a criminal. It is a little known quirk of the law that a defendant who dies between conviction and sentencing is no longer guilty, at least on paper. "You're not technically convicted till after you're sentenced," explains Danny Onorato, former federal prosecutor and partner in the D.C. criminal defense firm of Schertler & Onorato. "So although he was convicted by a jury, he technically has no criminal record." You could argue that Lay had exquisite timing, muses Onorato. "You could also argue," he concludes, "that the prosecutor gave him the death penalty."