Bush's obstinate refusal to hold one-on-one talks with North Korea has only made the secretive state more paranoid and hostile.

By Daniel A. Pinkston 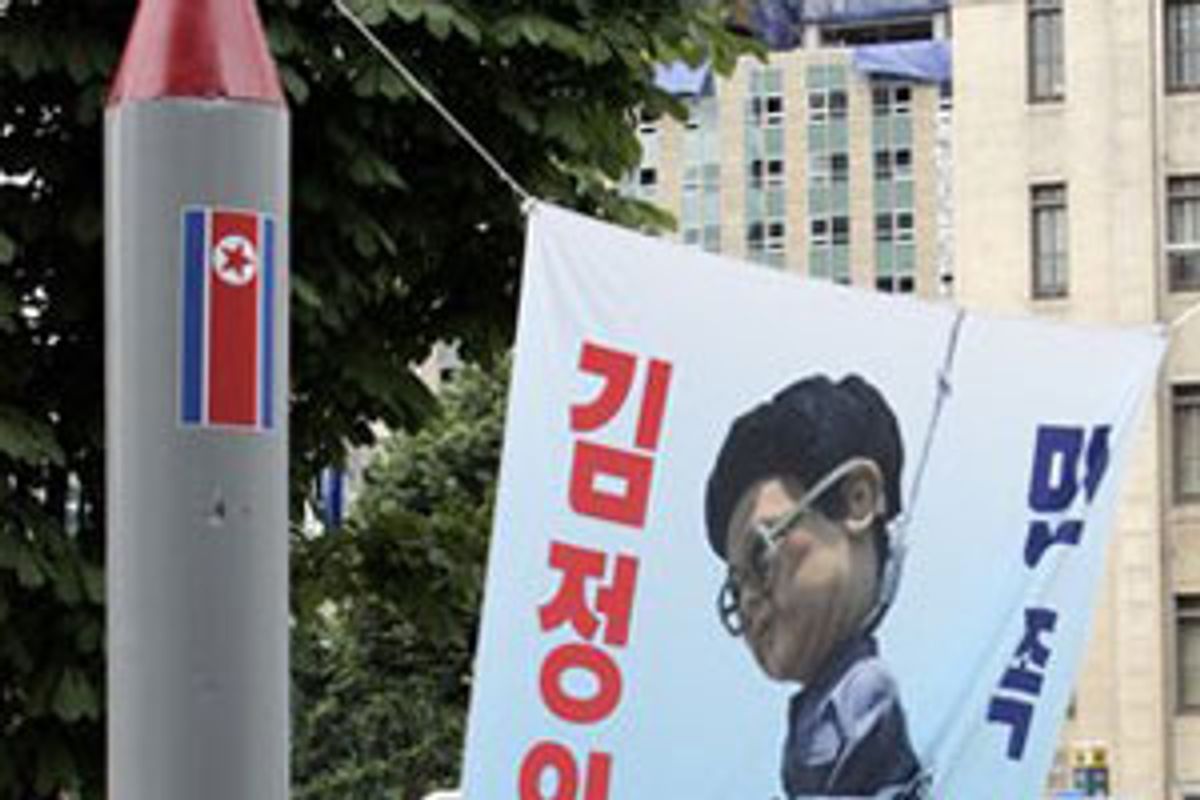 When U.S. reconnaissance satellites first discovered North Korea's long-range missiles, U.S. analysts didn't know the North Korean name, so they made one up. The Americans decided to dub the weapons "Taepodong," after the area in which they were spotted. The Koreans call the missiles "Paektusan," in honor of the peninsula's highest mountain. Paektusan has positive connotations for the North Korean regime since it's the mountain where former leader Kim Il Sung and his guerrillas based their fight against the Japanese during the 1930s. Taepodong, on the other hand, is an old, abandoned name that was used during the Japanese colonial period.

That the U.S. continues to refer to the Paektusan-2, launched earlier this week, as the Taepodong-2 may seem irrelevant, but it's analogous to sportscasters in the 1960s who insisted on calling Muhammad Ali by the name he'd rejected, Cassius Clay. Whether it's intentional needling or, more likely, a slight born of ignorance, the failure to agree on something as simple as a name is evidence of the Bush administration's continued refusal to communicate with the North Korean leadership. Following North Korea's missile tests, administration officials claimed they had no way of understanding North Korean intentions, and had no intention of trying. They still won't talk to Pyongyang unless the regime agrees to talks involving four other nations, even though the failure of the July 5 test presents yet another opportunity for one-on-one dialogue.

Part of the Bush administration's unwillingness to talk is knee-jerk anti-Clintonism, a blanket unwillingness to do anything the Clinton crowd did, even if it worked. About two weeks ago, South Korea's director of national intelligence revealed in testimony before South Korea's National Assembly that in mid-1999 North Korea erected a long-range missile at its Musudan-ri test site. The missile sat on the pad for about 50 days, apparently in preparation for launch, before U.S. and North Korean diplomats struck a deal in Berlin. According to the bilateral agreement, North Korea agreed to a unilateral ballistic missile flight test moratorium for as long as the two sides continued to meet and discuss verifiable constraints on Pyongyang's missile program and ways to improve relations. This deal was basically costless for the United States. Washington was not required to provide aid, security assurances, diplomatic recognition, or anything else to maintain the moratorium.

By simply returning to the table and treating North Korea as an equal partner, the United States might have succeeded in extending this flight test moratorium until today and beyond. We will never know, because the Bush administration refused to continue this process despite Secretary of State Powell's suggestion that the administration would and should extend the Clinton team's efforts. Somehow, the Bush administration has become convinced that talking to North Korea is a concession, regardless of what the talks might produce.

Just as the Bush administration had multiple reasons for invading Iraq, it has multiple reasons for refusing to talk to Pyongyang directly. The Agreed Framework of 1994 was a bad deal, the Bush team felt, in part because the Clintonites negotiated bilaterally. Since the North Koreans are "irrational," U.S. diplomats need representatives of other nations in the room -- Russia, China, Japan and South Korea -- to witness their behavior. Furthermore, the Bush administration believes that North Korea is a threat to its neighbors and will capitulate if pressured sufficiently by those neighbors, particularly China.

Granted, the North Korean problem is difficult and long-standing, and the Bush administration should be commended for establishing the six-party process. East Asia is lacking in international institutions, particularly in the security area, and there are a number of regional security issues that could be addressed in a six-party format, such as energy security, environmental security, maritime issues, and regional arms control, to name a few. However, the six-party talks and bilateral talks between Washington and Pyongyang are not mutually exclusive propositions. To the contrary, they could be complementary. And the missile tests have exposed the flaws in the Bush administration's current de facto policy, which is essentially letting the Chinese handle it.

North Korea's ballistic missiles and WMD programs do threaten countries in East Asia. But just as the threat perceptions of North Korea's neighbors are viewed through their own eyes, North Korea's motivations and actions behind its missile and WMD programs are driven by Pyongyang's own threat perceptions -- not by what Washington policymakers say or believe. If Pyongyang feels it needs bilateral reassurance from Washington in order to restrain its weapons programs, then it will build up its programs in the absence of those assurances. North Korea is a weak and insecure state. Insecure states have two choices -- they can seek alliance partners or they can increase their indigenous military capabilities. North Korea's alliance options are limited, if not nonexistent. In Pyongyang's view, only Washington can provide the security assurances it desires. Without those assurances Pyongyang believes the only choice is to increase its military power and use missile tests to probe U.S. intentions.

The failure of the Paektusan-2 launch reminds us that rocket science is hard. Pyongyang surely realizes that the desire to develop and deploy a reliable long-range ballistic missile capable of striking the United States will be very difficult and costly to achieve. One hopes they will realize that arms control could be a more attractive option in achieving the state's security objectives. However, Pyongyang needs a dialogue partner. Hard-liners in the Bush administration continue to reject bilateral talks, and insist that the proper response to the missile tests lies in ratcheting up pressure against North Korea. They are seeking punitive measures from the United Nations Security Council and from other participants in the six-party talks, particularly China and South Korea. But Beijing and Seoul, despite their displeasure with the missile tests, don't want to impose comprehensive sanctions or other measures that would destabilize North Korea. It's not in their national interests. The risk of the Bush administration strategy is that North Korea will not come back to the six-party talks and that China and South Korea will not adopt the type of punitive measures the administration would like to see. North Korea would then "increase its nuclear deterrent" and continue the development of ballistic missiles, and the Bush administration's insistence on "communicating" solely on its own terms will have antagonized two more nations.

We can never be sure whether U.S.-North Korean bilateral dialogue could have prevented the recent North Korean missile tests. However, we do know that South Korea and China want us to talk to the North Koreans, and that the process could help the Bush administration achieve its ends. It might empower Washington when asking Seoul and Beijing to impose sanctions. We also know that refusing to talk is neither a sign of strength nor a way to build confidence among our Asian partners, and has exacerbated an already bad situation.

Daniel A. Pinkston is the Director of the East Asia Nonproliferation Program at the Center for Nonprofileration Studies of the Monterey Institute of International Studies.

MORE FROM Daniel A. Pinkston