Bush to the media: Shut up and wave the flag

Wartime leaders have always demanded docility. But if the press had revealed the hideous truth about WWI, millions might have lived. 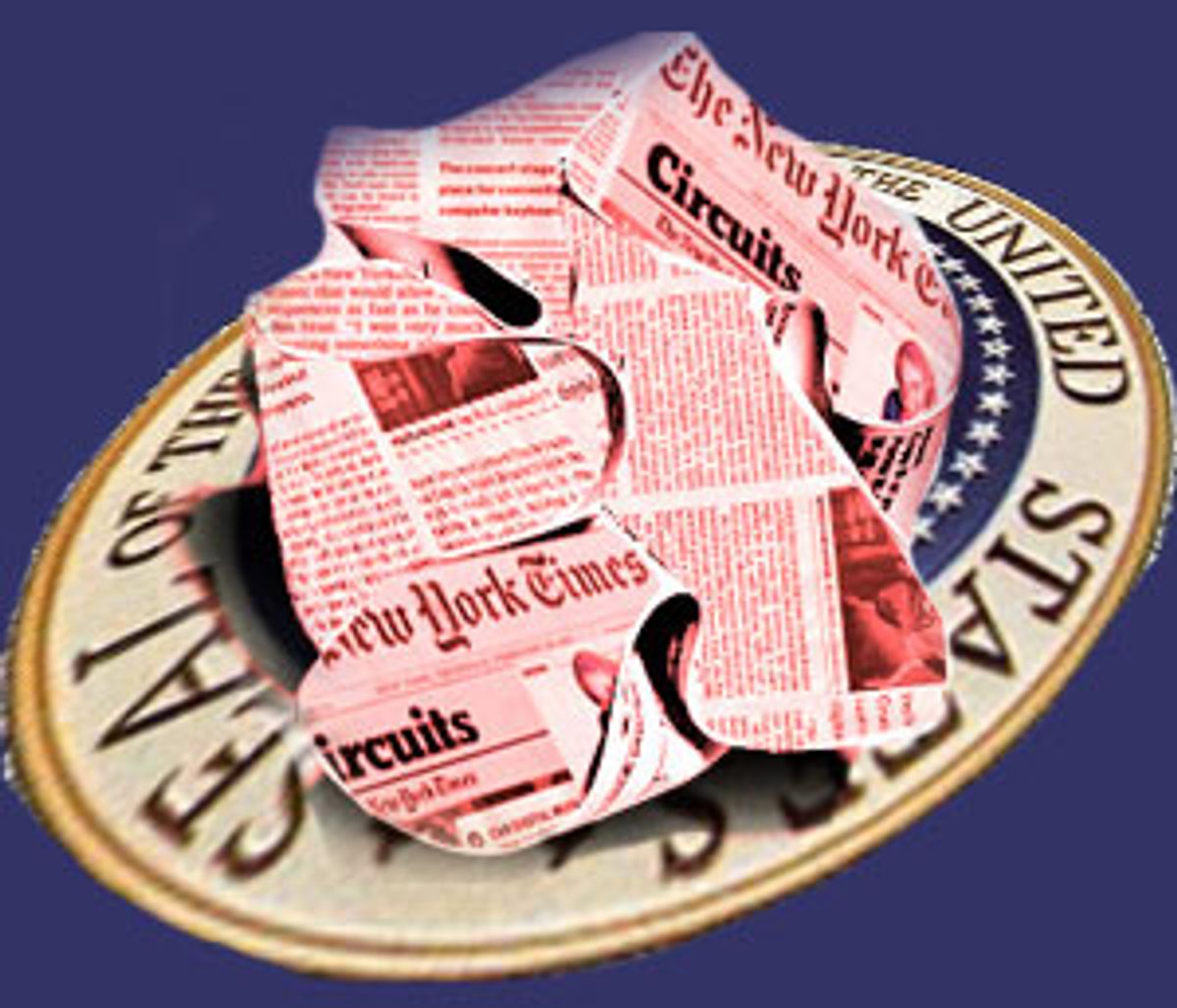 The war of words rages on about words of war. President Bush and his supporters have reintroduced a standing government tactic when things aren't going well on or below the battlefield: Shoot the battlefield messenger. As soon as the New York Times and three other newspapers published reports of government surveillance to ferret out al-Qaida funding, backers of the war in Iraq began crying, "Betrayal! Treason!" Some have insisted that the Times' press credentials be revoked and a few have even suggested, hysterically, that editor Bill Keller be tried for espionage.

Their claim, of course, is that the report somehow subverts the war on terror. Really? Not necessarily so. The first order of battle in combating terror of any stripe is to expose it. It's a common intelligence gambit to let the enemy know you're onto their networks because the revelation will often roll them up of its own momentum. If, God forbid, I were running a surveillance operation like the one the White House has instigated, the first thing I would do is leak it to the New York Times. Then I'd sit back and watch as the subterranean bankers and money launderers clambered to the surface. If those terror-backers have in fact been flushed to the surface by the Times, I wonder if this administration will ever give credit where it's due.

I suspect not. The real source of the administration's ire is not the information or even this particular revelation, but media criticism of the war itself. The Times is simply the most visible target. Governments expect nothing less of the press than that it function in times of conflict as a kind of national cheerleading unit. I heard the same angry trumpets during the Vietnam conflict. I was a young staffer at Time magazine when the Nixon administration was firing almost as much ammo at the press as it was at the Viet Cong and the North Vietnamese Army. I was privy to one such salvo when I was invited to Washington, along with some ranking editors, for a nose-to-nose with John Ehrlichman, President Nixon's strong-armed assistant for domestic affairs. Ehrlichman lit into us for not supporting the war effort. He took the wondrously paradoxical view that while America was accomplishing its mission in Vietnam, the press was subverting that mission and preventing its accomplishment. He was in effect staging for our benefit the White House version of the Army's daily Saigon press briefings -- which by then even military officers were calling the Five o'clock Follies.

My point, then and now: There is ample historical precedent to provide cover for the administration's position. Let's go back to August 1914, when Lord Beaverbrook, Britain's most powerful press baron, laid down the law for Allied reporters. There was to be no criticism of the Great War, no blood-soaked accounts of the scope of the mayhem or the full horror wrought upon the fields of Flanders. Instead, the press was advised to focus its attention on stirring accounts of valor in the air and on the field, and, of course, lurid, largely apocryphal tales of little Belgium ravaged by The Hun. The press -- including the New York Times -- fell nimbly into lockstep, grateful that reporters and editors were not to be executed as traitors, as many critics and conscientious objectors indeed were.

So truth, as J.B. Priestley aptly wrote, became the first casualty of World War I. Over the ensuing four years of terrible carnage it was joined by 20 million dead soldiers and civilians and countless more gruesomely wounded. The Great War, before it ended, made the Russian Revolution possible -- unless one imagines Kerensky and his handful of zealots could have subdued St. Petersburg were the czar's armies not frozen to their machine guns on the Eastern Front. It also caused the breakup of the Austro-Hungarian Empire, which spawned a Balkan conflict that continues to this day, and the disintegration of the Ottoman Empire, beginning but surely not ending with the creation of an artificial state, Iraq, whose warring nationalities and sects have been at one another's throats for a thousand years, yesterday inclusive. And finally, Germany's defeat forced the abdication of the Kaiser, which was followed by the inevitable collapse of the feeble Weimar Republic, which in turn begat Nazi Germany and World War II, which left 50 million dead and gave rise to the Cold War, Korea and Vietnam.

My question, then and now: Would it have come to all this if the London Times and Le Figaro and the New York Times -- even the German press -- had published authentic accounts of the horrors at Ypres and Passchendaele and the Somme? We'll never know, but of this I'm sure: The press is duty-bound to report, factually and fully to the body politic, on the operations launched by its government against all enemies, foreign and domestic. For if it does not, the government may itself become the enemy while we sleep.

Mark Goodman is a veteran journalist and author of the World War I novel "Hurrah for the Next Man Who Dies." He is currently writing a professional memoir focusing on responsibility in the media.