This movie -- about older white women paying for sex with beautiful young Haitian men -- is bound to get under people's skin. 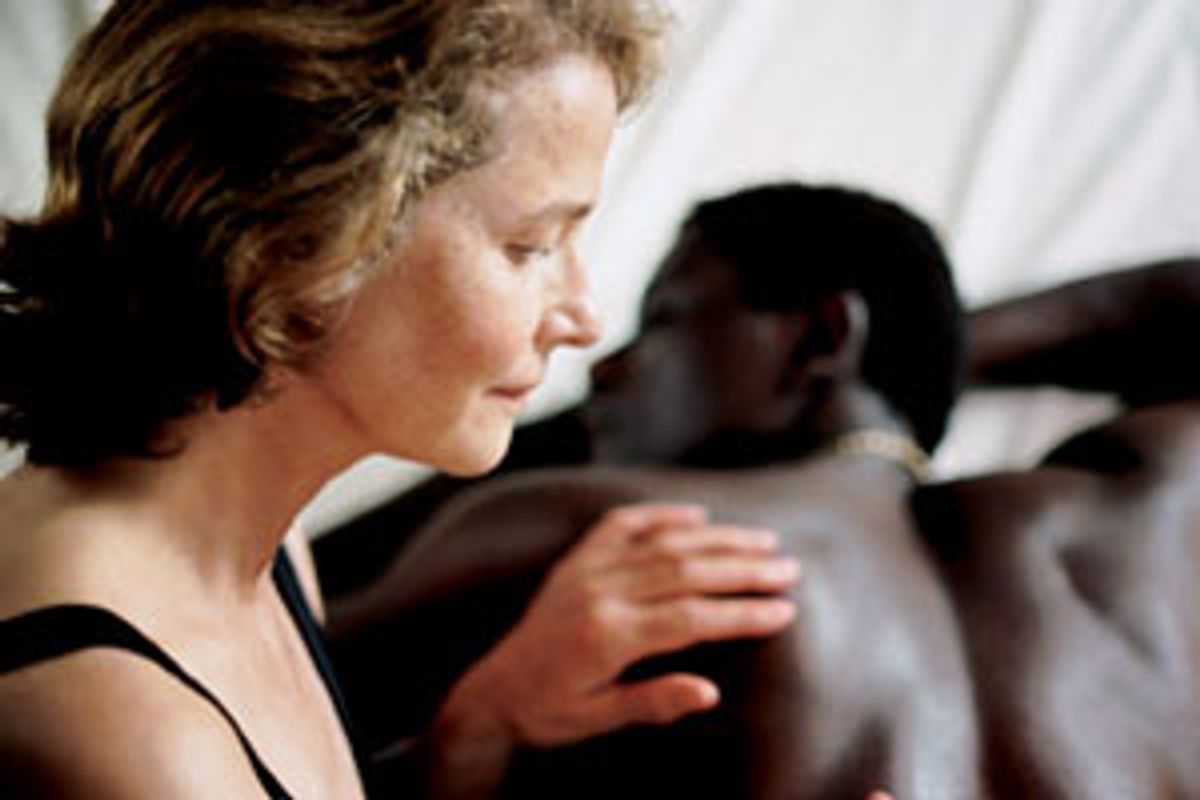 Any movie that addresses not just sexual politics but the uneasy blending of sex and politics is bound to get under people's skin. Laurent Cantet's "Heading South" is set in Haiti in the late '70s, at a resort where older white women -- from the States, Europe and Canada -- come to enjoy the company of, and to have sex with, beautiful young local men. This is a pleasure that they pay for -- if not outright, then by bestowing gifts on their young friends; their economic power gives them sexual power, something they're lacking in their everyday lives. And here, their age isn't a factor. Their money makes them just as desirable a catch as any younger woman would be back home.

The exchange of sex for money -- even if it's women doing the buying -- is by itself a recipe for controversy, and the colonialist overtones of this setup magnify that potential tenfold. Yet the only truly controversial thing about "Heading South" is that it refuses to render easy moral, or political, judgments. Cantet adapted the script from a book of short stories by the Haitian writer Dany Laferrière. The press notes for "Heading South" quote an interview Laferrière gave when the book, "La Chair du Maître," was published. Laferrière said he was interested in using physical desire and sex as a political metaphor, particularly in a setting where the gap between the rich and the poor is so huge. (The women visitors are rich in the context of Haiti's poverty, although at home, they'd be solidly upper-middle-class.) But even in business transactions, of any sort, human emotions are unpredictable: "We're dealing with a small group of very rich people who can buy anything, or who think they can buy anything, people or objects, and with others who are ready to sell the only thing they possess, their youth and their body. I wanted to find out if in this exchange, in this trade, where flesh meets flesh, there wasn't something more."

Cantet is also interested in that "something more," and "Heading South" is his unassuming map of that complex, indefinable terrain. Cantet is among the least arrogant of directors. He's not a bomb-thrower, like the incandescent Catherine Breillat, or a mischievous, sensuous brainteaser, like Claire Denis. You wouldn't expect "Heading South" to be any sort of political screed (even though it's acutely aware of political realities). And no one who has seen Cantet's painfully intense "Time Out" -- about a man who loses his job and goes to great lengths to hide it from his friends and family -- could accuse Cantet of being blind to issues of money, status and class. It's simply that moral indignation doesnt interest him. He's a humble and compassionate director, interested chiefly in how people respond in unexpected ways to difficult situations -- situations that most of us, from the cushy chairs of our movie seats, feel confident we'd know how to handle.

There's no such certainty among the characters in "Heading South": Brenda (Karen Young) is a married Savannah, Ga., woman approaching 50 who comes to the resort to reconnect with Legba (a wonderful non-professional actor named Menothy Cesar), a young man she'd met on a visit three years earlier, when he was just 15. Legba remembers Brenda, and seems fond of her. But he's very much in demand at the resort: Many of the women vie for his company, but Ellen (Charlotte Rampling) feels especially protective of -- and possessive of -- him, although she tries hard to hide it.

Ellen is a crisp English expat who teaches French literature at Wellesley but spends every summer in this place where she can purchase the illusion of being desired. Even though she's just a visitor, she pretty much runs the joint. She can be scathingly critical of the other women, and even here, where money can buy a sort of love, she's fiercely competitive. But her matter-of-factness about her situation -- as a woman in her mid-50s, in whom few men back home would take any interest -- is touchingly direct: "I always told myself that when I grew old, I would pay young men to love me," she tells Brenda, with a sharp little laugh. "I just didn't think it would happen so fast."

We learn more about these characters -- and something about Albert (Lys Ambrose), the Haitian gentleman who officially does run the joint -- from the straight-to-camera monologues they deliver. (Legba is the only major character who doesn't deliver such a monologue, and not, I don't think, because Cantet doesn't think he's important, but because Legba is the true center of the movie: He's a receptacle for hopes and desires that he has no way of fulfilling. The women claim to love him, but part of what they're in love with is a dream -- an illusion that Cantet fully acknowledges, although he refuses to punish them for it.)

Monologues like these are tricky for any director to pull off, and the first one, Brenda's, feels stiff and awkward at first. But as she tells her story, you realize that ungainliness is intentional: Brenda describes how she first met Legba. He was very thin, and very hungry, and she and her husband magnanimously bought him dinner: She marvels, with affection that she doesn't realize is tinged with condescension, that she had never seen anyone eat so much in her life. Then Brenda goes on to explain, in halting sentences that give way to tumbling, explicit ones, how she made love with Legba for the first time: She had her first orgasm at age 45.

And yet that revelation is almost incidental, because although "Heading South" is defiantly open about the sexual desires of "older" women -- the quotation marks are there because most of us have no idea of what "older" means, although somehow we know it when we see it -- the picture is decidedly not a fantasy about woman's sexual self-fulfillment. "Heading South" is just as interested in how these women's lives intersect with, and affect, the lives of the boys they come to sleep with: When Legba goes into town to play ball with his friends, they all admire him, asking him for advice on how to score with the ladies; when he visits his mother, who hasn't seen him for two weeks, she illuminates the small shack she lives in not by flipping a switch, but by plugging a light fixture directly into the wall. The movie never lets us forget what status and money mean to this kid. It also never lets us forget the very real dangers of life under the Baby Doc Duvalier regime, dangers that the white women who lavish him with gifts and money never have to face. (The movie doesn't feature any literal depictions of Duvalier's barbaric "security force," the Tonton Macoutes, but its glowering, watchful eye is ever-present.)

"Heading South" is a seemingly straightforward and simple picture that's really defiantly complex, sexually, politically and emotionally. Even the look of the picture has many muted layers: It's been beautifully shot by Pierre Milon, whose lens drinks in gorgeous beach vistas and breeze-ruffled foliage. Yet somehow we're always aware of the poverty, and the danger, just beyond the margins of the screen: This isn't a travelogue brochure.

The performances are similarly multilayered, often demanding that we reconcile conflicting views of each character. Louise Portal plays Sue, a plump woman from Montreal who's the most emotionally grounded of the tourists: She comes every year to spend time with her young lover, Neptune, and the changes the place effects on her become plain when she explains in her monologue, almost shyly, "It doesn't show, but here I feel like a butterfly."

Rampling, with her alternately bewitching and withering gaze, stresses Ellen's aggravating qualities -- yet her self-deprecating sense of humor often throws us a curve, and there are moments where her hard shell breaks apart before our eyes.

But Karen Young, perhaps best known for guest stints on "The Sopranos" and "Law & Order," is the true star of "Heading South." Critics and pundits are always complaining about how few good roles there are for "older" (there are those quotation marks again) actresses. What Young has here is one of those elusive good roles, although I wonder how much attention it will get, seeing that Brenda isn't a role model or a victim we can cheer for, but a human being who's privileged in some ways and deprived in others. Here, Young plays a character who's around the same age as the actress is in real life: This isn't 30 trying to pass for 20.

Young brings to the role a delicate blend of tentativeness and fierceness: At the beginning, we have no idea how emotionally fragile she is, and like Ellen, she teases out feelings of aggravation in us. But by the movie's end, we see both how wrongheaded she was to come to Haiti, and how there's no other place in the world for her. Brenda may think she has come to Haiti, to Legba, for fulfillment, which she's willing and able to pay for. Her painful discovery is that love and fulfillment aren't the same thing. "Heading South" is only partly about the power that money confers; mostly, it's about everything that money can't buy.