The N.Y. court says marriage is good for kids. Then why doesn't my daughter deserve the same legal protection as the children of opposite-sex parents? 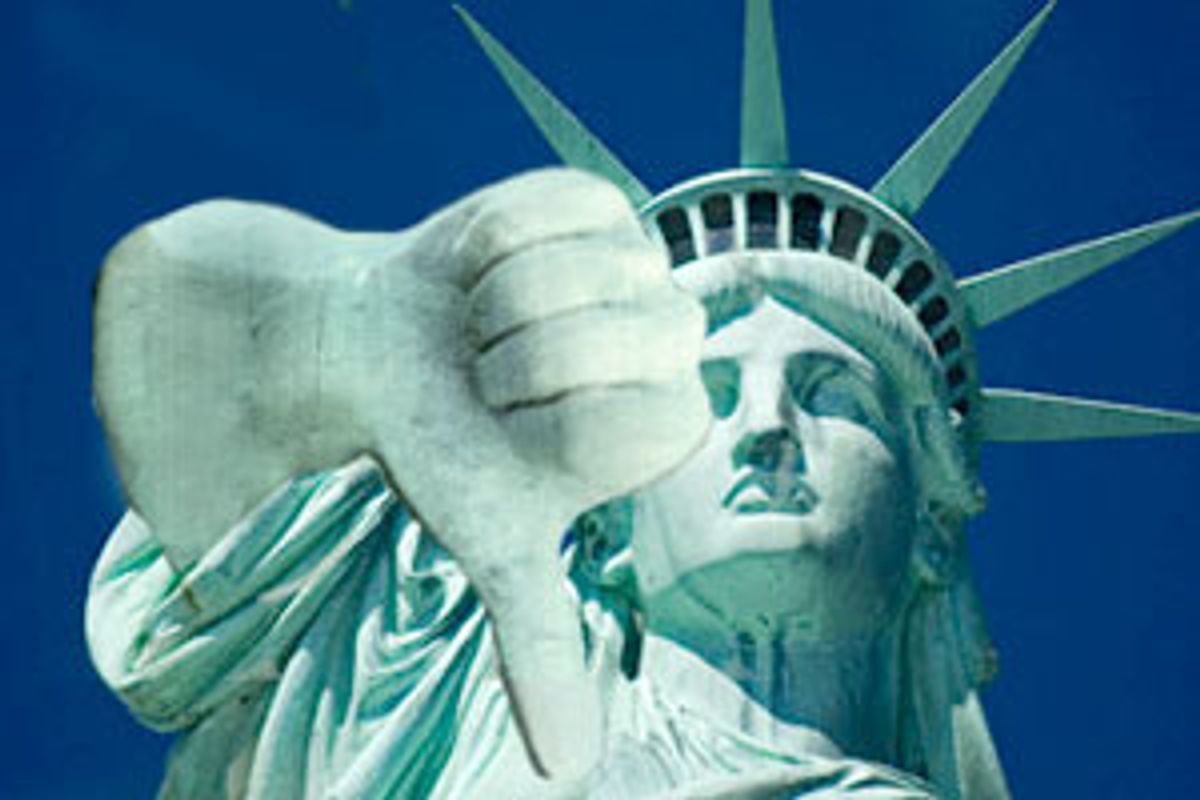 There's nothing like a judicial ruling -- in this case, the extremely tortured one written last week by Judge Robert S. Smith of the New York Court of Appeals against gay marriage -- to make me feel simultaneously all-powerful and helpless. On Friday, my family read the news over breakfast. I was on my way to volunteer at my church food pantry; my wife was finishing the endless paperwork for our 17-year-old daughter's college loan, and Katie -- one of the "children" in whose interest the court said it ruled -- was on her way out the door to her summer job.

Who knew we could have such a grandiose impact? Just by hanging out in our kitchen, the three of us challenge what Smith called the "accepted truth for almost everyone who ever lived, in any society in which marriage existed, that there could be marriages only between participants of different sex." By asking for the legal benefits of marriage, we threaten the already unstable institution of the heterosexual family.

Judge Smith's decision posited two major reasons to "rationally support" the ban on gay marriage -- both of them grounded in the assumption, which I share, that marriage is important to the welfare of children. After a few factually incorrect preambles (note to judge: Not all gay couples become parents through adoption or "technological marvels"; we can tell you how reproduction works later, in private) he launched his argument.

First, the judge delivered a surprising attack on the heterosexual agenda: Straight people, he said, are really bad at marriage. Opposite-sex relationships, wrote the judge, are often "casual" or temporary. (Wasn't that what right-wing frothers used to say about queers?) Thus, wayward, irresponsible, sexually promiscuous straight people need the legal benefits of marriage as inducements (read: special prizes nobody else gets) to lure them into "solemn, long-term commitments" to each other, so that they can care responsibly for children. Were we to extend those privileges to homosexuals ... well, they wouldn't be privileges anymore, would they?

Second, the judge declared, it's best for children to grow up with a mother and a father. Though he admitted there is no scientific evidence to support this assertion, "common sense," he said, makes it so. (If we're going to be commonsensical, your honor, the children of lesbian and gay families also have "living models of what both a man and a woman are like" -- surprisingly, few of us raise our kids in single-sex dormitories surrounded by barbed wire. And if the point is a variety of role models, why allow single straight people to adopt?)

It's understandable that the judge would be worried about the institution of marriage. Straight people are just not that into marriage anymore. By 2000, only 25 percent of American households consisted of a married heterosexual couple with children. Legal marriage gives heterosexuals the right to hire a cheesy '70s cover band, read embarrassing poetry to their friends, and fight with their parents over whom to invite to a party with bad food. (It also allows couples to go broke together: Marriage is an $85 billion a year industry.) And marriage is hard to sustain: For heterosexual couples, who can divorce the minute they're tired of their sacred vows, about half of all marriages end in divorce. Legal marriage carries many responsibilities: among them the duty of parents, unmet by 62 percent of divorced fathers, to support their children. Increasing numbers of straight people don't bother: Over a third of all births are out of wedlock.

Judge Smith recognized these difficulties, arguing with syntactical wobbliness but undeniable fervor that the institution of heterosexual marriage needs propping up. He even suggested, counterintuitively, that "unstable relationships between people of the opposite sex present a greater danger that children will be born into or grow up in unstable homes than is the case with same-sex couples."

But the judge's solution -- keep queers out of the mix -- doesn't work, if he really wants marriage to be about the welfare of children. First of all, as Judge Judith Kaye wrote in her dissenting opinion, "while encouraging opposite-sex couples to marry before they have children is certainly a legitimate interest of the state, the exclusion of gay men and lesbians from marriage in no way furthers this interest. There are enough marriage licenses to go around for everyone."

Furthermore, if the courts should encourage marriages that help kids, why aren't the courts supporting the more-likely-to-be-stable relationships of gay couples?

And finally, what do the courts have to say about the rights of the kids in lesbian and gay families? Or, to get personal about it, what about the rights of my brilliant, beautiful, adored daughter, with her two mothers and gay father? Katie's father and I, her biological parents, were never married; her mothers were married, briefly, in the great civic uprising of February 2004 in San Francisco. (That marriage was quickly annulled by the courts, making us ex-wives living together raising a child, a category not frequently found in surveys of marriage statistics.)

All of Katie's parents have supported her, caring for her in sickness and laughing ourselves silly over her jokes; all of us have argued with her about cleaning up her room; all of us are preparing for tears and pride as she heads off to college this fall. Our daughter, like all children, deserves what Judge Smith recognized as "an important function of marriage" -- to "create more stability and permanence in the relationships that cause children to be born." She also deserves the legal benefits and protections afforded to the kids of heterosexual parents -- even unmarried heterosexual parents. (In 1968, the Supreme Court swept away many of the harsher provisions of common law governing illegitimacy, ruling on equal protection grounds.) She deserves to have Martha recognized as her mother.

And this is where I feel powerless.

It's bad enough that the state treats me and my wife and Katie's father as unworthy to share in full citizenship. But it's unforgivable that our child, too, is penalized for our inability to marry. She can't claim Martha as a family member; she can't get insurance coverage through Martha or be treated as Martha's child for tax, probate or healthcare matters; she has no legal relationship with the woman who's helped raise her since she was in kindergarten and a boy made her cry. "You don't even exist," that boy told Katie, with Judge Smith's impeccable logic. "You have to be married to have a baby, and your parents aren't married, so you weren't even born, ha ha."

Which brings me back to feeling powerful -- seriously. As we've seen in South Africa and Eastern Europe and San Francisco, civil society in its richness is always greater than official codes about who is, and isn't, a full person. Katie and a million kids like her are here, and their families will continue to thrive. At some point, the courts will catch up.