The Baghdad morgue, where Iraqis come every day to collect the bodies of slain relatives and comrades, is the alpha and omega of Iraq's civil war. 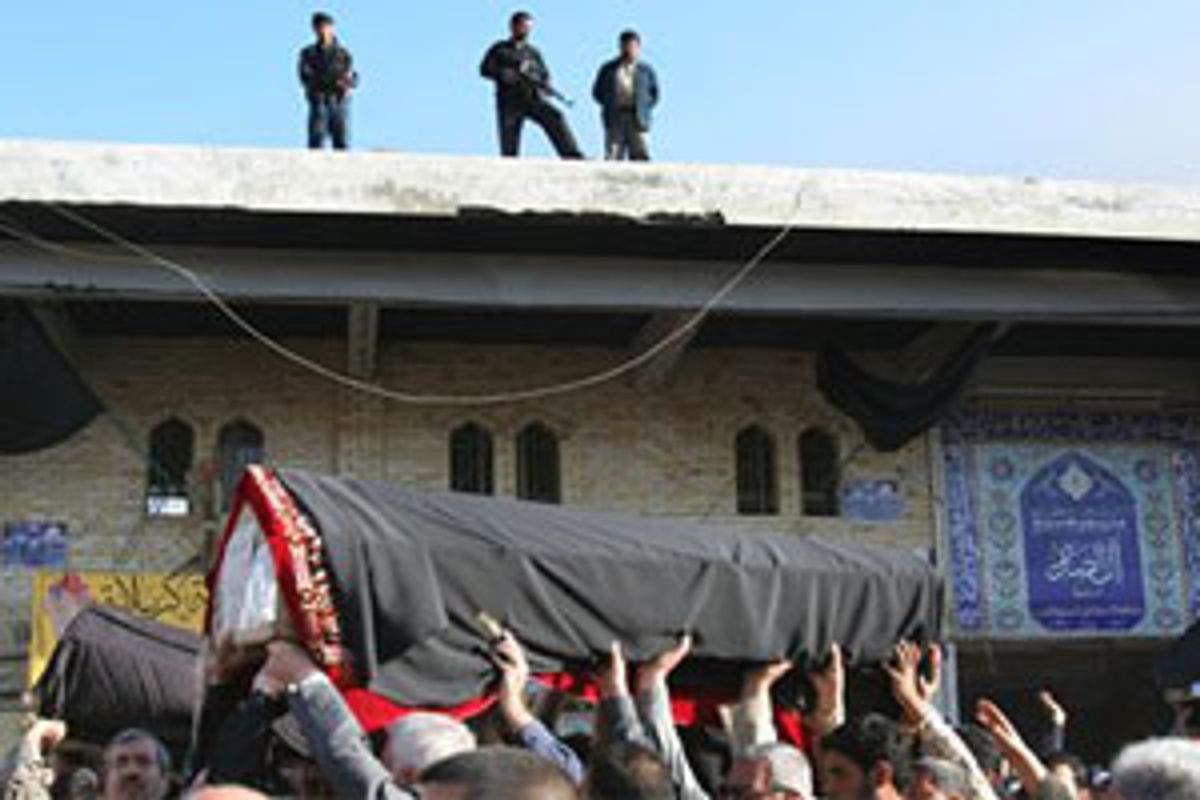 There is the sweet, sharp smell of the dead in their peaked wooden coffins, souring in the white heat of the day. A crowd of men are carrying a newly loaded coffin on their shoulders in a procession away from the loading doors of the morgue and through the main gates, chanting, "There is no God but God." The morgue is set behind a guarded checkpoint that allows access to the health ministry offices, and on this Thursday morning, a day on which many Iraqis celebrate their weddings, the morgue is full, the officer in charge of the gate tells me. At 10 a.m., it has 48 bodies that must be claimed for a trip to Najaf or burial at a large Sunni cemetery near Abu Ghraib prison.

More dead will arrive as stunned and furious men mill around the main checkpoint near the gate, their minds adrift in grief that is already turning into hatred. Many of the men waiting are wearing the familiar black shirts and the thin beards of the Mahdi Army, which means that the morgue, like other government offices, is essentially under militia control. The guards all have obvious affiliations with unofficial armed groups, as do the police.

There are families here claiming their own beloved dead, militiamen claiming comrades, and many of those left alive are naturally thinking about revenge, which will be taken in time by brothers and sons of the deceased. On this nightmarish and ordinary day, most of the people at the gates are Shiites -- an imbalance that stems from the mass executions and bombings employed by Sunni extremists, a terror strategy that reveals their desire to totally annihilate their enemies. It is not a surprise that the morgue is a dangerous place for Sunni families.

The scene at the gates of the health ministry is the alpha and the omega of the Iraqi civil war. The parking lot is packed with cars as Iraqis come from all around Baghdad and its outlying towns to search for bodies. By 10:15 the crowd has grown considerably to number close to a hundred. Some of the men are armed with pistols. One man who is tying a coffin to the roof of a minivan hides his face with a white cloth. White is a potent color in Iraq; it speaks of spiritual purity and a willingness to die. The cloth itself doubles as a mask to keep the stench of the corpse from coming through. The sight reminded me of the shrine of Imam Ali in Najaf during the siege, where dead fighter after dead fighter was carried around the tomb of Ali on the shoulders of his friends, who radiated devotion and religious sacrifice. From one second to the next, it is impossible to know what will happen in this death-charged place.

Three days after the U.S. military killed the Jordanian terrorist leader Abu Musab al-Zarqawi with a pair of well-placed 500-pound bombs near the village of Hibhib, his organization, al-Qaida in Iraq, launched a new offensive, including a mosque bombing, that claimed scores of lives in Baghdad. It was a sign that even if the leader was killed, the well-oiled mechanism of destruction was still running.

Baghdad in the early days of Nouri al-Maliki's government is paralyzed by vehicle bans and long curfews and slipping under the waves of sectarian violence. The city, barricaded by Iraqi soldiers and Americans who man checkpoints at the entrances to each district, is being lost to bloodshed, not won. Neither the fledgling Iraqi state nor the U.S. military has been able to slow down the pace of sectarian killings, and it is clear to everyone who lives here that the authorities are fighting a holding action and not much more.

"I think there will be many more killings of Shiites," a lightly bearded, middle-aged man named Ahmed told me in the restaurant of the Hamra hotel. "This is the time of revenge for al-Zarqawi." Ahmed spoke with the calm precision of a former military officer. He had a strong allegiance to the Mahdi Army and a close family connection with Abu Dereh, a shadowy and infamous Shiite death squad leader I was researching. Abu Dereh was reportedly captured over the weekend by U.S. and Iraqi forces in a bloody raid in Sadr City, although local Iraqis claimed he escaped. Ahmed's son-in-law worked for the death squad leader briefly, assisting with abductions before he was rotated out.

All sorts of rumors and myths circulate about Abu Dereh. One myth has him driving deep into Sunni-held territory in Anbar province and burning entire villages, while another says that he was a refugee of the great marshes in the south, and when Saddam drained them as punishment for the uprisings after the first gulf war, he fled to Sadr City, or Thawra as it was called. Abu Dereh, which means "father of shield" ("shield" is a proper noun in Arabic), is not his real name, it is a nom de guerre. Whenever it was uttered, the Baghdadi who hears it becomes serious and drops his voice so he could not be overheard.

Ahmed gave me an anonymous letter that on June 20 was distributed to seven Sunni mosques in Mansour, written in eloquent Arabic. The writer, a man who called himself Shalshal al Iraqi, titled his missive "The Reaper of al Rusafa." The letter warned Sunnis living in the western half of Baghdad about Abu Dereh and the death squads that were moving through the city. In the letter, Shalshal al Iraqi accuses Abu Dereh of working directly for the Mahdi Army hierarchy. The first paragraph of the letter reads:

"His name is Abu Dereh and he is a professional killer who isn't any less dangerous than al Zarqawi. Abu Dereh is a dangerous criminal who even the Interior Minister fears. Some of the Sadr City police work under his command and other forces from the Sayyid (Moqtada Sadr). Abu Dereh is a wild terrorist and dozens of killers prey behind him. Everyone in Sadr City knows this madman, but they don't say his name, it is whispered in Sadr City when they wake up to the news of blindfolded dead bodies and bodies thrown out at al Seddeh, or on the junkyards of Qasra wah Atash, even in the sewers of Rustumiya, which the Interior Ministry officially made as a place for Abu Dereh's victims. The bodies have been raked by claws."

Ahmed confirmed that Abu Dereh is a Mahdi Army commander, but defended him, saying that he only targeted guilty people for interrogation, that the accusations in Shalshal al Iraqi's letter were false. "He just takes Salafis," Ahmed said, referring to the Sunni fundamentalists, including members of Zarqawi's al-Qaida in Iraq movement, who espouse a fundamentalist return to the religion in the time of the Prophet and sanction the killing of Shiites. Shiites often refer to people involved in the mosque bombings in their parts of town as Salafis or Takfiris, but these terms are for the most part epithets, convenient labels used to justify the killing.

Muqtada al-Sadr is almost certainly aware of what is happening in Sadr City. Recently, one of Saddam's defense lawyers, a man named Obeidi, was abducted from his house, bound and taken to Sadr City, where he was publicly executed and his body dumped in front of a portrait of Muqtada Sadr's venerated father, Mohammed Sadiq al-Sadr. On the day I left Baghdad, June 23, clashes broke out between the Mahdi Army and Sunni groups, in a neighborhood battle that drew in U.S. attack helicopters and closed down the city entirely. It was the first sign of open conflict between the two sides in the new civil war, which has since begun raging out of control.

I met one of the victims of that civil war the day I went to talk to the Mahdi Army representative Rikabi. After I left the Sadr office, I drove for five minutes down Al Shu'ala's dusty main street, and turned off onto a side road. Walking alone under the crucible sun in her black abaya was a woman of middle age carrying groceries. When I stopped the car to give her a ride, she climbed in, gave me a blessing, and immediately pulled out the death certificate for her son and began to weep. We had just turned off the main road onto an abandoned army base where half-constructed houses stood among piles of yellow bricks. This was Chikook, a squatters camp for Shiite families fleeing sectarian violence, managed by the Mahdi Army. Two police SUVs guarded the entrance, but I was able to drive straight through without being stopped. The woman, whose name was Leila Hassan Hammadi, directed me to her house, a section of the army barracks, and invited us to come inside to the cool dark of the house. A thousand dollars paid to someone she would not name had bought her two rooms, joined by a hole punched in the concrete wall. Hammadi's three school-age daughters quietly materialized from behind a partition to bring out orange drink and bruised apples. Hassan, who is desperately poor, explained that her family had fled Taji, where some of the worst sectarian attacks have been.

"My son was only a child and they threw him in the trash," Hammadi said, in a seizure of anguish. From a plastic bag where she kept her important papers, she took out postage-stamp-size pictures of her 18-year-old son Ali and her husband and handed them to me. "They kidnapped my husband." When I asked who had killed her son and taken her husband, she said she didn't know and was silent for a moment. "After they killed Ali, we received a letter at our house that said we had to leave in one week. It said if we see you a week from now, we will kill all of you. We didn't leave. That's when my husband was kidnapped." The date on Ali's death certificate was Nov. 6, 2005.

Hammadi and her daughters had been displaced for more than seven months. Without a man in the house, her only source of support was the Mahdi Army. Her refusal to describe the attackers is completely normal in Iraq. As I left, Hammadi begged for my help, for any contacts with human rights group that could support widows. "I am in a special situation," she said. "Please."

This is the second of three articles. Tomorrow: The investigation of the Mahdi Army's death squads goes terribly wrong