Will Iraq sink a key GOP incumbent in New Mexico? 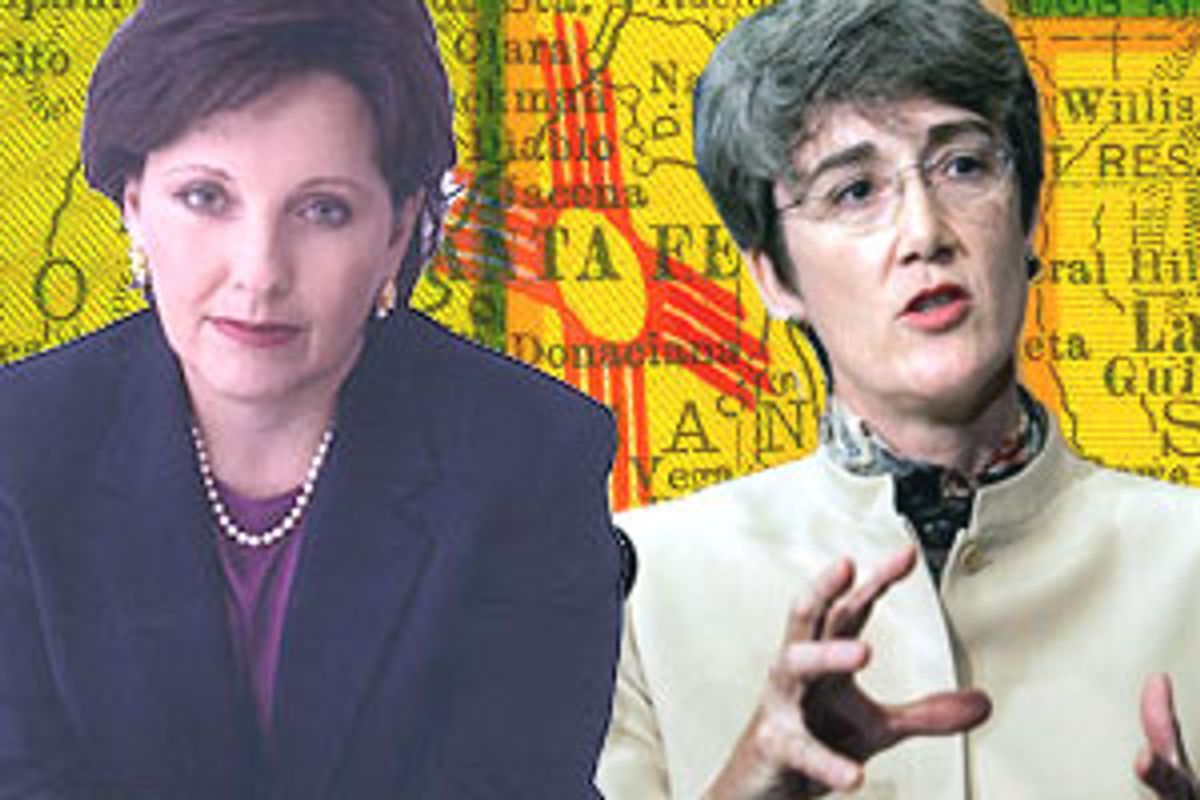 Republican moderate Heather Wilson is a former Rhodes scholar, Air Force officer, White House national security aide and a current four-term congresswoman, who is one of the most respected figures on the House Intelligence Committee.

Wilson, who represents the Albuquerque-centered 1st District that both John Kerry and Al Gore narrowly carried, is also rated by National Journal as the nation's fifth most imperiled GOP House incumbent. She faces a spirited battle from state Attorney General Patricia Madrid, who in 1998 became the first woman elected to that office. Madrid's challenge helps explain why Wilson held a press event last Wednesday morning at a community center in the village of Tijeras to trumpet her latest contribution to the pork-barrel politics of Washington.

Dressed in a businesslike blue blazer, Wilson assured the 20 or so Social Security recipients in the audience that she had heard their complaints about sharing facilities with children's programs. As a result, Wilson took advantage of an "earmark," a thumb-on-the-scale budget gambit, much abused by House Republicans, that allows legislators to lard pet projects onto spending bills. Now Wilson got to triumphantly proclaim, "We have been able to pass through the House of Representatives an appropriation of $500,000 to start the Tijeras senior center."

Compared to a $223 million "bridge to nowhere" in Alaska, this $500,000 federal grant represents penny-ante gaming of an orderly appropriations process. But the announcement of the Tijeras senior center -- accompanied by a Korean War veteran's passionate plea for "two pool tables" -- underscores the powers of incumbency that have so far permitted Republicans like Wilson to prosper amid difficult terrain. GOP national chairman Ken Mehlman in a phone interview with me called Wilson a "perfect example" of a House member who offers "independent equity, independent accomplishment and represents the needs of the district in a way that the public knows well and respects."

Leo Baco, the local resident who eagerly lobbied Wilson about two pool tables, puts a human face on Mehlman's abstractions like "independent equity." Long retired after 30 years in the Army and the National Guard, Baco said that his father "would turn over in his grave" if he had ever voted for George W. Bush. But Wilson is a different story. "She's a nice lady and she's done a good job," Baco said. "I'm a Democrat, but I go by the person."

Yet Wilson -- despite being among the dozen most independent House Republicans according to the National Journal's 2005 vote rankings -- is not much better than an even-money favorite for reelection. Part of this jeopardy stems from Wilson's unstinting support for the Iraq war: "It would be a disaster for American security and the future of Iraq for the United States to withdraw precipitously," she said in an interview. The other part of the equation is the popularity of Madrid, her antiwar Democrat challenger.

Rio Rancho is a Republican suburb on the northern fringes of the district. But Madrid, wearing a straw hat bedecked with flowers and sitting on the back of a red 1967 Mustang convertible, received a friendly response when she rode in the local Fourth of July parade. According to her pollster Celinda Lake, Madrid has 90 percent name recognition in the district. "The usual Republican modus operandi is to define a Democratic challenger as a crazy liberal or something like that," Lake said. "But it won't work with Patsy because she's well known and it isn't buying a pig in a poke."

While Madrid is not running as a one-issue candidate (she will freely talk about out-of-control gasoline prices and outrageous drug companies), she is animated by opposition to the war. In a brief holiday speech at a largely Hispanic Veterans of Foreign Wars post on the west side of Albuquerque, Madrid declared, "We need a party in the House of Representatives that is going to hold the Bush administration's feet to the fire about this war in Iraq." Asked about the conflict during a luncheon interview at El Pinto, a sprawling restaurant the president often visits on trips to Albuquerque, Madrid said, "I think it's playing a huge role in this race. When you walk into a room, it's one of the first things that people ask."

Wilson is certainly ready for this debate, saying with no danger of being accused of hyperbole, "My opponent and I have very different views about the war in Iraq." What makes the politics of the issue tricky is that support for the war is a bit stronger in this swing district than in many parts of the country, partly because of Kirtland Air Force Base and the large presence of military retirees. That is why Madrid is not trying to present the issue in terms of who was right in 2002 when Congress voted to authorize the invasion of Iraq. Rather, as she explains, turning the question into a referendum on Bush's competence, "The thing I'm talking about is who do you trust to get us out of the mess."

Sitting in Washington, swapping glib generalizations about the contours of Election 2006, it is easy to become convinced that another I-word issue -- "immigration" -- rivals Iraq in motivating voters. Knowing that New Mexico is a border state and that the 1st District is one-third Hispanic, I will admit that I was gulled by the conventional wisdom. At least, I was until I arrived in Albuquerque. It turns out that there are no significant differences between the candidates on the issue. And both Wilson and Madrid share an ill-concealed mockery for Easterners who expect to find a state bitterly divided between Hispanics harboring illegal aliens and English-only zealots training to join the Minutemen.

Wilson, who voted against the punitive enforcement-only House Republican immigration bill, said, "We've been settled since 1598 by Spain. And Anglos are the newcomers. So some of the hot buttons in politics that surround this on the national level and in other states are not present in New Mexico." Madrid, whose family has lived in the southern part of the state for centuries and who grew up speaking Spanish as her first language at home, had a succinct answer why immigration was not an issue in her New Mexico House race. "Because this isn't Arizona," she said proudly.

This week the campaign in the 1st District moved into its living-room-war phase. Wilson, flush with campaign cash from a recent Bush visit, launched a major TV ad buy with a gauzy spot that ballyhooed her as "independent, honest, effective" and showed her piously declaring, "Sometimes I'm working with people in my party and sometimes they're not in my party. That's OK." It is probably a shrewd strategy for Wilson to radiate a certain degree of amnesia about her political connections to the current occupant of the Oval Office. That explains why the Democratic Congressional Campaign Committee is currently running a 60-second radio ad that derisively mocks Wilson for missing a symbolic House vote on Iraq to attend last month's Bush fundraiser.

Party committees like the DCCC and its Republican counterparts may do the dirty work of slinging invectives in this campaign while the candidates feign being above the fray. That is certainly Wilson's traditional approach. Asked in our interview whether she would use the standard GOP epithet "cut and run" to describe Madrid's where-is-the-exit stance on Iraq, Wilson resisted the obvious support-the-president talking points. "I haven't used that phrase and it's not my job to characterize other people's rhetoric," she said, adding, "I try to be more pragmatic and, frankly, more polite."

"Polite" is not a word you often hear these days in politics, even in polite company. And with Wilson and Madrid poles apart on Iraq and control of the House hanging in the balance in places like this, it defies logic that the great race in New Mexico's 1st District will continue to be scripted by Miss Manners.