The suspicious death of Dr. Evil

Spurred by a Salon inquiry, the Army is reopening an investigation into whether Saddam's poison master died as a result of abusive treatment by U.S. troops. 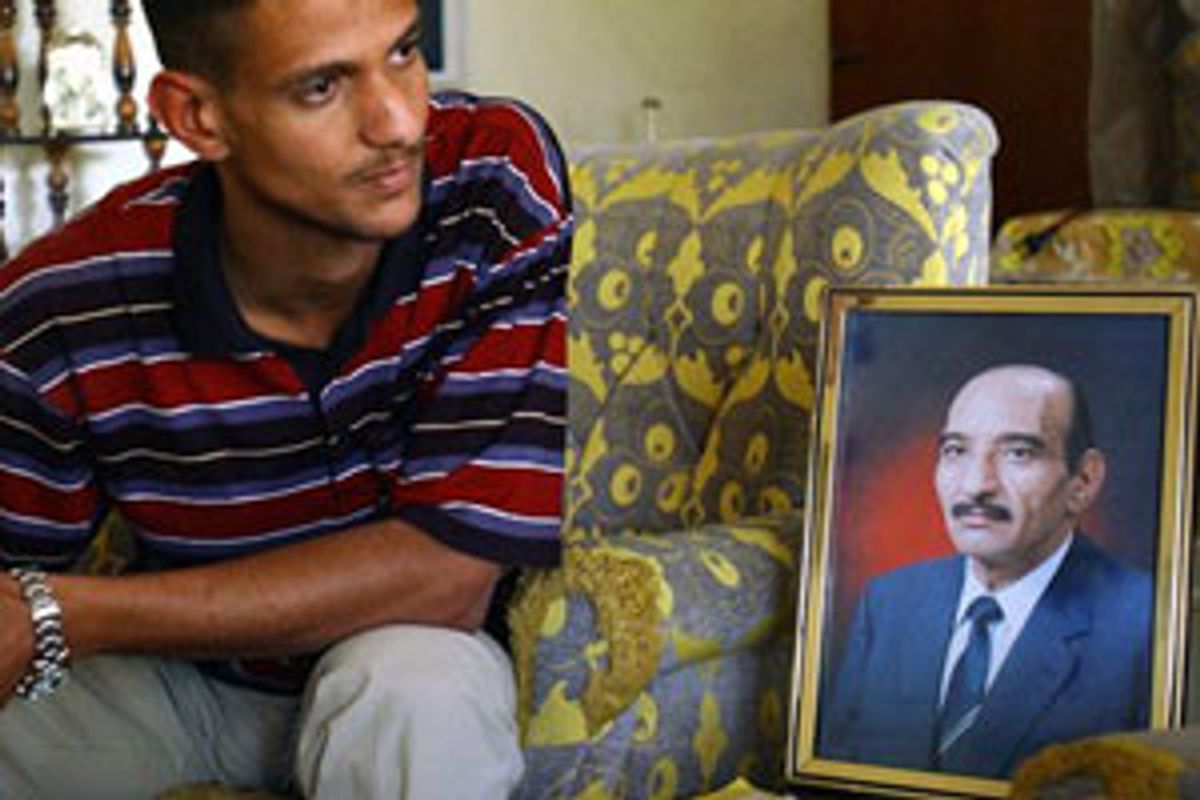 Among all the former henchmen of Saddam Hussein, there may have been no man more deserving of the death penalty than Dr. Muhammad Munim al-Azmerli. For decades, he allegedly served as Iraq's poison master, brewing potions for political assassinations out of ricin, snake venom and nitrogen mustard. He tested his wares on prisoners of the Baathist regime, as many as 100 individuals altogether, including Iranians, Kurds and a Saudi Arabian, according to declassified U.S. intelligence reports. His compatriots said he would feed detainees poisoned food, test explosives on the living and give prisoners drugs that caused memory loss and sexual dysfunction. Those who survived were often killed.

But Azmerli never got the chance to face the justice he deserved. He died at the age of 65 in a U.S. military hospital near Baghdad on Jan. 31, 2004, the only Iraqi weapons scientist known to have died in American custody. The neurosurgeon who examined him in the final days of his life said he was suffering from two separate brain hemorrhages. One had been caused days earlier when he allegedly fell from his hospital bed onto the floor. The second hemorrhage, which was considered life threatening on its own, had been caused more than three weeks earlier when Azmerli was in U.S. military custody, according to doctors' statements to Army investigators. After two years, and two separate investigations, the Army's Criminal Investigation Command classified Azmerli's death as "undetermined," and closed his case in September 2005.

This summer, Salon began its own investigation into the circumstances surrounding Azmerli's death, raising new questions about the causes of his injuries and the quality of the CID criminal inquiries. In response to these questions, the Army decided this week to open a third investigation into the death of Saddam's poison master. "Your inquiry prompted us to do another review of the case," said CID spokesman Christopher Grey on Thursday. "The investigative report was prematurely closed due to operational tempo." Grey would not comment on the specific focus of the third investigation.

Salon raised the concerns after obtaining the second completed CID investigation of Azmerli's death through a Freedom of Information Act request. The documents, which have not been written about before, include a March 2, 2005, memo from a CID investigator, who raised serious concerns about CID's initial investigation. That investigator, whose name was blacked out, wrote that CID had failed in its first inquiry to adequately look into the possibility that Azmerli died from abuse at the hands of the U.S. military. The CID had not, for instance, reviewed interrogation records for possible "exceptions to policy to employ harsh interrogation techniques" or "complaints of mistreatment or injuries," the investigator wrote. There was also no attempt in the initial investigation to interview members of the "task force" that captured Azmerli on April 25, 2003.

At the time of his capture, a classified special operations group, reportedly code-named Task Force 121 and later Task Force 6-26, was scouring Iraq for scientists who might know the location of biological and chemical weapons. According to the CID investigator, the same task force that captured Azmerli was also under investigation for several other cases of "allegedly using excessive force when handling detainees." In March, the New York Times reported that Task Force 6-26 soldiers had posted a sign outside their secret interrogation center that read, "NO BLOOD, NO FOUL." The Times reported that 34 members of the operation have been disciplined for detainee mistreatment and that five Army Rangers were convicted for punching and kicking a detainee.

Five days after the CID investigator's March memo, a CID detachment commander based in Iraq, whose name was also withheld, wrote a letter that rejected many of the first investigator's concerns. "The undersigned finds no reason to believe that the deceased was abused by US or Foreign Coalition personnel," the detachment commander wrote. "He never mentioned being abused during capture, transport or interrogations." Citing no specific evidence, the detachment commander also raised the possibility that the prior hemorrhage had been caused by Azmerli's other medical conditions, including hypertension and diabetes.

But Rod Barton, an Australian microbiologist who was working in Iraq with the CIA at the time, told Salon in June that Azmerli had in fact complained to a coalition official about being abused when he was captured. "Azmerli did tell one person that he was 'roughed up' after he was arrested," Barton wrote in an e-mail to Salon. "For reasons of confidentiality, I cannot tell you who this person was or even his job, but I am certain he is genuine."

Barton, who said Azmerli was nicknamed "Dr. Evil" by intelligence officials, also gave Salon information about a round of interrogations that Azmerli underwent in December 2003, at around the time he may have suffered the earlier unexplained brain hemorrhage. The new round of interrogations was prompted by the Dec. 19 arrest of Nu'man Muhammad al-Tikriti, the former director of the Iraqi Intelligence Service's poison directorate. According to the final CIA report of Iraq's weapons programs, Tikriti told investigators that he had personally watched Azmerli administer cyanide, methyl micro chloride, thallium acetate and sodium fluoride to 10 prisoners in 1983.

Barton's account of the new round of interrogations is backed up by the documentary record. The second CID investigation into Azmerli's death found that the poison master was interrogated as late as Dec. 29, 2003, about one month before his death. Azmerli's medical records also described several medical incidents that could be consistent with abuse. On Oct. 18, Azmerli complained of chest pains and extreme headaches and was found crying in his cell. On Dec. 15 blood was seen coming from Azmerli's nose, which continued for several days. On Jan. 24, days before his death, Azmerli complained of headaches, chest pains and dizziness and was airlifted to a military hospital near Baghdad. Once he arrived, he was secured to a hospital bed. Five to 10 minutes later, hospital personnel told investigators, he fell off the bed and hit his head. There were no witnesses to the fall, according to the CID investigation.

For years, Azmerli's unexplained death has been the subject of much international speculation. He has been profiled in major stories by the Los Angeles Times, the Associated Press and the Guardian. In Australia, Barton has written articles about the case, arguing that Azmerli was the possible victim of abuse by U.S. forces. In interviews with the press, Azmerli's family has denied his involvement in Saddam's poison program and petitioned for the U.S. military to compensate for his death. Those requests have been denied.

Steven Miles, a professor of medicine at the University of Minnesota who has written a book on the medical profession's involvement in detainee abuse, told Salon that the second CID investigation into Azmerli's death was unsatisfactory. He was skeptical of the medical speculation in the report that Azmerli's other ailments might have caused a spontaneous bleeding in his brain. "The fall, if that was the cause of the final bleeding, was set up by improper restraint," Miles wrote in an e-mail after being provided a copy of the second CID report. "He was tied to the bed, arm and leg on one side, and then rolled off in that direction."

It remains unclear what steps the CID has taken to investigate the classified operation that was responsible for Azmerli's capture and interrogation. Many pages of the second CID report dealing with the interrogation have been withheld under national security exemptions to the Freedom of Information Act. But the CID does have a documented history of having investigations frustrated, if not aborted, because they led into classified operations. Another CID investigation into abuse by classified task forces has noted, for instance, that there was a "computer malfunction" that caused Task Force 6-26 to lose 70 percent of its files, hampering the inquiry.

In that same abuse case, a CID officer wrote that the Army had been unable to investigate claims of abuse because of "the suspects' and witnesses' involvement in Special Access Programs and/or the security classification of the unit they were assigned to during the offense." In the same file, also obtained through a Freedom of Information Act request, another CID agent notes his exasperation. "Hell," the CID official wrote, "even if we reopened it we wouldn't get any more information than we already have."

After his death, Azmerli's family commissioned an autopsy, which concluded that the cause of death was blunt force trauma to the head. This surprised Barton. In late January 2004, Barton was receiving regular briefings near Baghdad on Azmerli's condition. He said the cause of Azmerli's hospitalization was described at the time as either "a brain tumor or [an] aneurysm." "I have checked the latter recollection with my colleague and he recalls the same," Barton wrote in an e-mail.

Now, for the third time in nearly as many years, Army investigators are attempting to get to the bottom of what killed Azmerli. If the past is repeated, the outcome of this latest investigation will say more about the U.S. military's ability to hold itself accountable than the still murky facts of a wicked man's untimely demise.