"You, Me and Dupree" 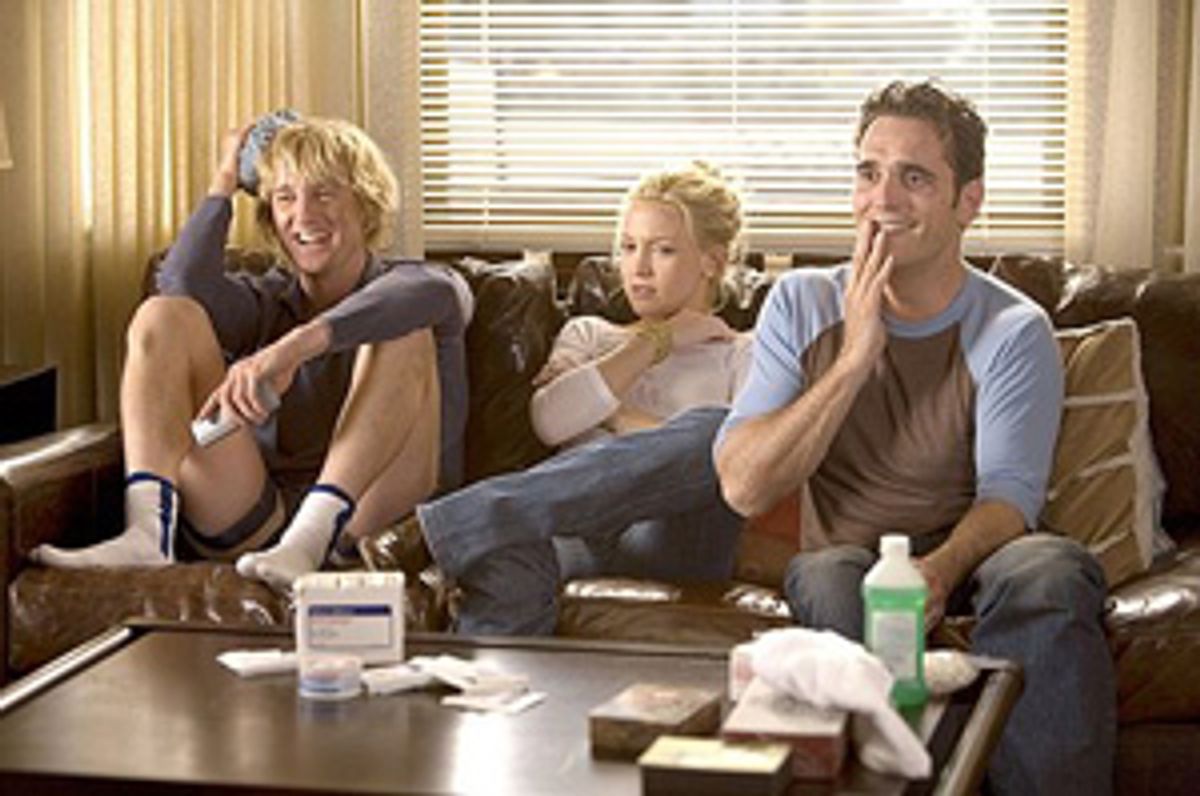 "You, Me and Dupree" seems to have been made by people who don't know the difference between a light comedy and an inconsequential one. Matt Dillon and Kate Hudson play newlyweds Carl and Molly: After their idyllic nuptials in Hawaii, they're ready to settle down to their new life together, in a comfortable and cute house on a quiet suburban street. Owen Wilson is Dupree, Carl's free-spirited, couch-polishing best friend. Dupree loses his job after taking a week off to serve as best man at the wedding. So Carl, despite Molly's misgivings, invites him to stay with the couple until he can regain his footing.

Childlike and preternaturally unemployable, with a wardrobe that consists mostly of swim trunks and bathrobes with little soccer balls on them, Dupree threatens to ruin the lives of everyone he comes into contact with -- until, that is, he miraculously turns into a beaming savior figure: Carl and Molly come to recognize the value and strength of their love; Carl learns that he has to stand up to his domineering, pain-in-the-ass father-in-law (who also happens to be his boss), played by Michael Douglas in a Gordon Gekko-goes-Grecian-Formula pompadour. This is also a movie where husbands chafe under the domesticating influence of their womenfolk, grumbling because they have to be home by midnight and can't mess up the living room during their football-night beer blasts; the wives flounce about indignantly when they discover their husbands actually look at porn. In the world of "You, Me and Dupree," marriage hasn't changed much since Maggie waited up for Jiggs, rolling pin in hand. Dupree -- who at one point tells a classroom full of grade schoolers, "My career is living and loving, and I do that to the utmost" -- has his work cut out for him, making his friends see that the love between a man and a woman is a beautiful thing.

Great. But does it have to be so damn dull? "You, Me and Dupree" is a comedy of such dim wattage (figuratively speaking -- the cinematography is perfectly adequate) that it barely registers as a moving picture. You sit there, peering at the screen, waiting for the laughs to kick in -- the movie has just enough proficiency to keep you believing they may eventually show up, even though it never delivers.

Everything about "You, Me and Dupree," even the toilet humor, is tepid and rigorously inoffensive: Dupree stinks up the master bathroom! Molly has to wrap a towel around her face before she can even venture in there! It's as if directors Anthony and Joe Russo ("Welcome to Collinwood") and writer Michael LeSieur have tried to make a comedy about marriage geared to frat boys, without even enough vigor and gusto to keep frat boys entertained. Because the picture takes no chances -- it rarely risks bad taste, even when Molly and Carl catch Dupree masturbating in their living room -- it doesn't even give you that surge of outraged self-righteousness you get from sitting through a truly bad comedy.

What's strangest about "You, Me and Dupree" is that not one of its three key characters -- all played by actors who know what they're doing and who have terrific natural charm -- even registers as a presence. Hudson is likable, as always, and even though she's known for her sunny demeanor (as her mother, Goldie Hawn, has always been), she knows how to deliver a line with surprising sharpness (as her mother also does). But there's not much for her to do here except register disapproval and disappointment: Her innate wit and energy are constrained. Dillon is the dull, lumpish straight guy, a role that, with his high-school-jock good looks, he's able to play convincingly enough -- but why should he have to?

And Wilson, usually an absurdly enjoyable comic actor, just seems like sunshine in a can. He does have an elegant way with a gag: After signing the couple up for HBO without asking, Dupree assures them he'll go halfsies on it -- "Because I love it so!" he says, and Wilson's pinkie-up delivery is funny by itself. But although the movie takes great pains to tell us why we ought to love Dupree, it never makes us love him. Dupree is supposed to be a pain in the ass with an underlying sweetness that's irresistible, and immeasurable. We've all known, and sometimes loved, people like that. But Dupree's whimsical elfishness is more wearying than it is endearing. You'd want him off your couch, too.