U.S. accused of kidnappings in Iraq 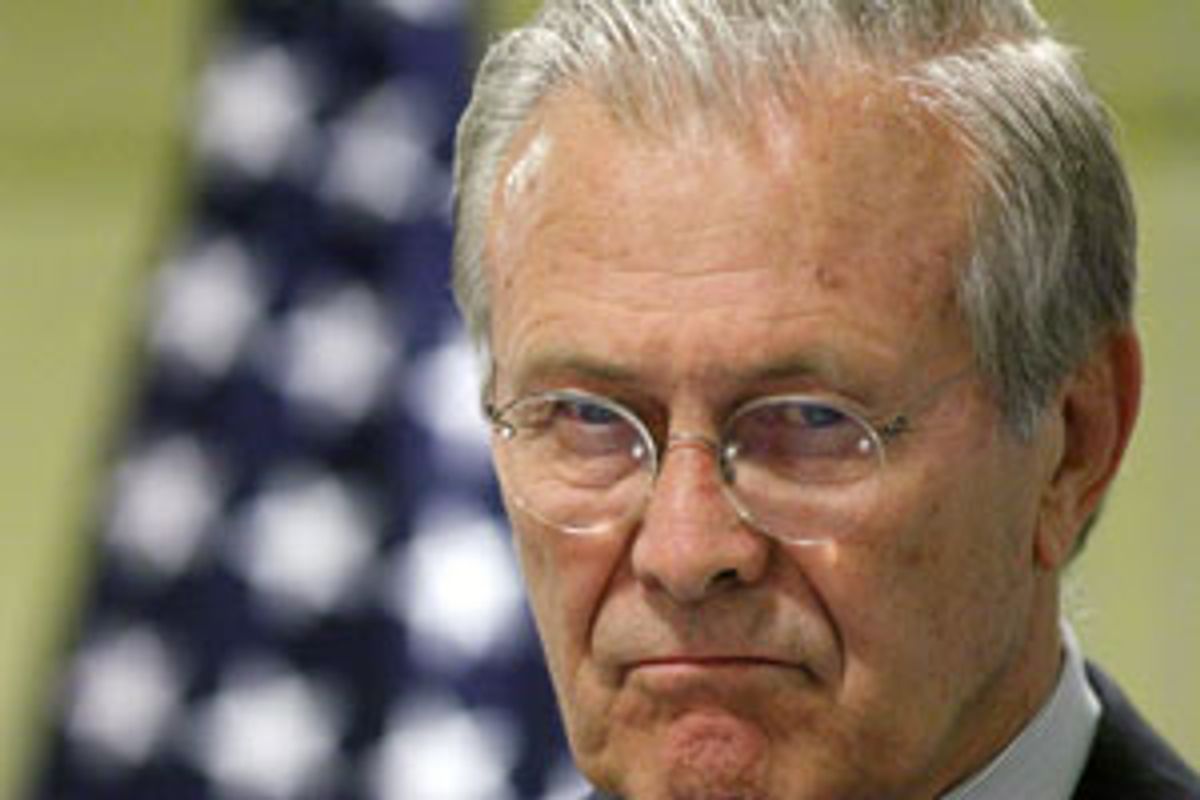 Congress has demanded that Secretary of Defense Donald Rumsfeld hand over a raft of documents to Congress that could substantiate allegations that U.S. forces have tried to break terror suspects by kidnapping and mistreating their family members. Rumsfeld has until 5 p.m. Friday to comply.

It now appears that kidnapping, scarcely covered by the media, and absent in the major military investigations of detainee abuse, may have been systematically employed by U.S. troops. Salon has obtained Army documents that show several cases where U.S. forces abducted terror suspects families. After he was thrown in prison, Cpl. Charles Graner, the alleged ringleader at Abu Ghraib, told investigators the military routinely kidnapped family members to force suspects to turn themselves in.

A House subcommittee led by Connecticut Republican Christopher Shays took the unusual step last month of issuing Rumsfeld a subpoena for the documents after months of stonewalling by the Pentagon. Shays had requested the documents in a March 7 letter. "There was no response" to the letter, a frustrated Shays told Salon. "We are not going to back off this."

The subpoena demands that the Pentagon turn over documents about apparent retribution by the military against Army Spc. Samuel Provance, a whistle-blower, who sought to expose abuse at the infamous prison by talking to military investigators and the press. Following his revelations, the Army demoted Provance from sergeant and revoked his security clearance.

The subpoena also includes a separate demand, at the behest of Government Reform Committee Ranking Member Rep. Henry Waxman, D-Calif., for any documents that might show that U.S. forces were systematically detaining family members of suspects at Abu Ghraib, and mistreating them to force suspects to talk.

In a hearing before Shays' Government Reform subcommittee last February, Provance testified that the Army had retaliated against him. Provance also made the disturbing allegation that interrogators broke an Iraqi general, Hamid Zabar, by imprisoning and abusing his frail 16-year-old son. Waxman was shocked. "Do you think this practice was repeated with other children?" he asked Provance. "I don't see why it would not have been, sir," Provance replied.

Zabar's son had been apprehended with his father and held at Abu Ghraib, though the boy hadn't done anything wrong. "He was useless," Provance said about the boy in a phone interview with Salon from Heidelberg, Germany, where he is still in the Army. "He was of no intelligence value."

But, Provance said, interrogators grew frustrated when the boy's father, Zabar, wouldn't talk, despite a 14-hour interrogation. So they stripped Zabar's son naked and doused him with mud and water. They put him in the open back of a truck and drove around in the frigid January night air until the boy began to freeze. Zabar was then made to look at his suffering son.

"During the interrogation, they could not get him to talk," Provance recalled. "They said, 'OK, we are going to let you see your son.' They allow him to see his son in this shivering, freezing, naked state," Provance said. "That just totally broke his heart and that is when he said, 'I'll tell you what you want to know.'"

Provance said the boy was timid and afraid. "He was so skinny and so frail, and he was scared out of his mind," Provance remembered. "He was so skinny the handcuffs would not fit securely on his wrist. I had to put this green sandbag on his head. I just felt like a horrible person doing this."

Provance was not an interrogator; at that time, he worked on a security detail at Abu Ghraib. He said he did not see firsthand the boy being abused in the truck, although an interrogator working on the general's case later explained the abuse to Provance in detail.

Provance's account does not appear to be an isolated allegation. It echoes similar accusations at Abu Ghraib and across Iraq. In an interview with military investigators conducted after he was imprisoned, Graner called kidnapping, in addition to detainee abuse, "the other big Geneva Convention violation" going on at the prison. "They were picking up, you know, Joe Snuffy's wife to get Joe Snuffy," Graner explained to military investigators. "So, more or less, we're holding this female with no charges, which happened a lot."

Graner did not say in the interview who was doing the kidnapping. There were a broad range of forces operating at Abu Ghraib, including military Special Operations troops and CIA operatives.

Similar allegations have shown that kidnapping may have been a systematic practice. Special Operations troops, working with an elite unit called Task Force 6-26, allegedly abducted the 28-year-old wife of a suspected Iraqi terrorist during a raid on a house in Tarmiya, Iraq, in May 2004, the month after the Abu Ghraib scandal broke. That is according to a memorandum buried in thousands of pages of documents obtained by the ACLU through the Freedom of Information Act. The memorandum, a formal complaint titled "Report of Violations of the Geneva Conventions," was filed in June 2004 by a 14-year veteran intelligence officer with the Defense Intelligence Agency. The Department of Defense blacked out the officer's name.

In the memorandum, the intelligence officer said the kidnapping was planned. "During the pre-operation brief it was recommended by TF [Task Force] personnel that if the wife were present, she be detained and held in order to leverage the primary target's surrender," the officer recalled, stressing that he objected to the tactic. Later, the wife was indeed present when the raid took place. "I determined that she could provide no actionable intelligence leading to the arrest of her husband," the officer recalled. "Despite my protest, a raid team leader detained her anyway." She was held for two days.

Little has been reported about kidnapping in comparison to the exposure of the detainee abuse depicted in the photographs from Abu Ghraib. But there have been isolated press reports.

In 2003, Iraqi Maj. Gen. Abed Hamed Mowhoush died in U.S. custody in northern Iraq after suffering beatings and interrogations. He died when he was stuffed into a sleeping bag and straddled by Chief Warrant Officer Lewis E. Welshofer Jr. In January 2006, Welshofer was reprimanded for Mowhoush's death. His son, Mohammed, told the Washington Post that month that U.S. forces first kidnapped him and his three brothers from their home. Mohammed was 15 at that time and claimed he was not an insurgent. "They said if my father does not come [turn himself in] you will never see your family back," Mohammad told the Post. The article stated that classified documents show the general "later surrendered in an attempt to free his sons."

Congressional staff said the Department of Defense so far has not adequately responded to the subpoena for documents about Provance or kidnapping at Abu Ghraib. The Pentagon claimed that Shays' subcommittee already had everything it needed about detainee abuse. "The Department has already provided much of this information to the Congress -- mainly to the House Armed Services Committee, a committee of oversight," Lt. Col. Mark Ballesteros said in an e-mailed statement. "We have delivered to the House Government Reform Committee all of the documents that can be provided and are appropriate to provide." Ballesteros added that, "Humane treatment is and always has been the Department of Defense standard for the treatment of detainees in its custody."

But staff from both parties on the House Government Reform Committee said that won't do. Shays, a pro-war incumbent facing a tough election this fall, told Salon that he had no intention of backing down. "If the administration wants more power, then oversight of it has to be more aggressive," he said. He lamented that congressional oversight of detainee issues should have been stiff all along. "I just wish we had been on top of this issue sooner," he said with regret.

Congressional experts agree. "Oversight has been moribund during the first five years of President Bush's terms," said Charles Tiefer, a professor at the University of Baltimore School of Law, who worked as solicitor and deputy general counsel of the U.S. House of Representatives from 1984 to 1995. "Nowhere has it been more moribund than with respect to the Pentagon."

There is no paper trail that shows that kidnapping or abusing the family of suspects might have been official Department of Justice or Pentagon policy. It is not mentioned in any of the Bush administration interrogation memos that have so far surfaced in the press. In late 2002, commanders at the military prison at Guantánamo Bay did request authority, during interrogations, for "the use of scenarios designed to convince the detainee that death or severely painful consequence are imminent for him and/or his family."

In a December 2002 memorandum, Rumsfeld rejected a "blanket approval" of that interrogation technique, but did not rule it out completely.