I was a Commie rock star from Colorado

A fascinating biography of Dean Reed, the "Johnny Cash of Communism," tells a particularly strange tale of East meeting West. 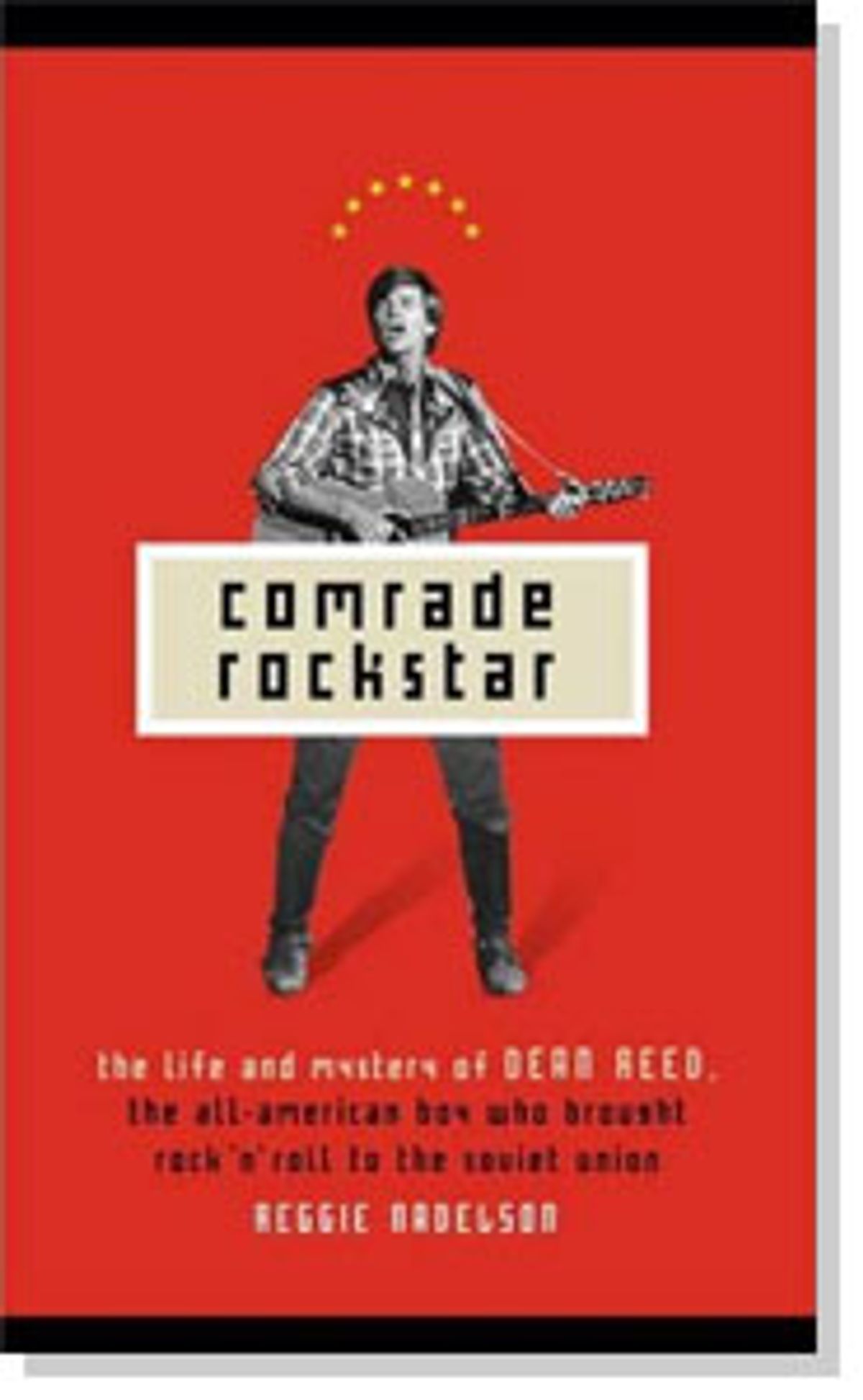 If you travel to Russia or any of the countries in the former Soviet Bloc today, you will likely be able to drink Budweiser, eat a Beeg Mek and buy Jay-Z and Britney Spears CDs at one of many Western-style shopping malls. An enormous, immaculate McDonald's in Moscow is sometimes snidely referred to as the "People's Palace," but the snarking is irrelevant, the restaurant is always bustling. In the 15 years since the collapse of the USSR, globalization has crossed what were once its republics and occupied territories like the Siberian Express. It is a funny twist of Cold War fate, then, that after the fall of the Berlin Wall, one of the earliest Westerners to come east has largely been forgotten. In "Comrade Rockstar," Reggie Nadelson tries to revive the bizarre legacy of Dean Reed, the man who left the United States a struggling singer from Nowhere, Colorado, and found Lenin-proportion fame being the proto-American for the USSR.

What made Reed different from someone like Pete Seeger, who had played his lefty folk music at the Kremlin a generation earlier, was that Reed parted the Iron Curtain in 1965 with the thrill and charm of a rock star. He shook his hips, did the twist and possessed the healthy glow and tight pants of postwar American youth. As Nikolai Pastoukhov, a midlevel Soviet bureaucrat who claims to have brought Reed to the USSR, explained to Nadelson, he was our "first friend from the West." The book, which has just been reissued -- Tom Hanks and Dreamworks recently bought the movie rights -- tells the story of "The Life and Mystery of Dean Reed, the All-American Boy Who Brought Rock 'n' Roll to the Soviet Union." Although he was not particularly talented and would have been just another wannabe Elvis back home, he was exactly what the Kremlin needed: Reed neatly embodied the exotic West at a time when Soviet youth were starved for it, and more remarkable still, he was a "true believer."

Born in 1938, Reed grew up outside of Denver when it was still a cow town. As his mom tells it to Nadelson, Reed was a shy boy who started playing guitar as a way to get girls; it wasn't until he was in college that he saw the possibility of something bigger. He dropped out of school for Hollywood at age 20 where his good looks -- more than his voice -- got him a contract with Capitol Records. While living in Los Angeles, Reed studied acting with a man named Paton Price, a shady character who took a deep interest in Reed's sexual enlightenment (Price supposedly took Reed to a brothel to lose his virginity) and whom the impressionable Reed would later credit with shaping his own political convictions. Impatient with his slow career -- his signature "Twirly" was a saccharine song about a majorette -- Reed left the United States in 1962 and headed for Chile where he was told he had a hit with "Our Summer Romance." To his surprise, he was huge in South America. He would stay for three years before making his way to Europe and eventually the USSR.

From the time Reed left America until his "accidental death by drowning" at the age of 47 in East Berlin (you must read the book to sift through the many conspiracy theories about his demise and then choose one for yourself), the "Johnny Cash of Communism" was constantly performing. He toured all over the Eastern Bloc, made "spaghetti westerns" with Russian star Yul Brynner, sang "Venceremos" for Chilean laborers under Pinochet, and "Ghost Riders in the Sky" for a finger-tapping Yasser Arafat. On "60 Minutes" in 1985, Reed told Mike Wallace that before singing "My Yiddishe Momma" for Arafat he confessed that although he did not believe in Zionism, he loved the Jewish people, to which Arafat replied "That's OK, Dean, I have nothing against the Jewish people."

It was after watching this "60 Minutes" episode that Nadelson became obsessed with Reed. Here was this handsome American who should be raising cattle but was instead spouting the rhetoric of the state with more passion than any apparatchik. Reed wholly believed, as he told Wallace, that there was "freedom to worship under Communism." If Reed was "politically naove," as Wallace later told Nadelson, he was nonetheless genuine. "It wasn't merely a kind of parrot repetition" of the Communist Party line, said Wallace. After reading "Comrade Rockstar" there is no question that he believed; as one of his lovers says, Reed dreamed of founding a Soviet-inspired social democratic party in America.

With a dizzying eye for detail, Nadelson deftly records the bizarre facts of Reed's life. She's done an exhaustive job traveling across continents over many years to interview nearly everyone who was affected by Reed -- from his three wives (Patty, Wiebke and Renate), to his mother, Ruth Anna (his father killed himself in 1984), to Russian music critic and stymied intellectual Artemy Troitsky, to an extended cast of characters including translators, his adoring and dumbfounded American friends, and, most important, his fans. At times it seems shes talked to half of Moscow, and indeed the book occasionally reads more like interview notes than narrative.

Even so, when she's interviewing Dixie Schnebly, one of Reed's closest friends (and probably his lover), Nadelson gets an incredibly lucky break: It turns out that Schnebly recorded every single phone conversation she had with Reed while they were apart, she in Denver, he in East Berlin. These truly bizarre conversations offer intimate details of Reed's life that any biographer would kill for. Here we get a glimpse of Reed's egomania -- he often talked of himself in the third person and would repeatedly ask his wives to say that they "wanted, needed, and respected him." And at the end of nearly every conversation Schnebly would instruct Reed, when he was down, to look in the mirror and say, "I love me." It also becomes apparent through Schnebly's conversations and reports from Reed's wives that he battled "black moods" -- maybe manic depression, maybe panicked fear of age -- where he would be stricken with paranoia and despair. On one particularly grim occasion shortly before his death he took a machete to his arm, which later convinced many that his fatal drowning accident was a suicide. As Nadelson learned more about the last years of Reed's life, this does seem more likely than it having been a CIA- or KGB-motivated assassination.

Reed was a man stuck in time, which was OK, because he lived most of his life in a country stuck in time. Nadelson deftly shows what happened when his part of the world became unstuck -- at an alarmingly fast rate. Reed, nearing 50, still in tight pants and using his peace and love vernacular, was practically a dinosaur. By the time he died in 1986 kids were listening to bootleg Metallica records; where he was once the commodity, he was now outdated, a relic of the soon-to-end Cold War. It is Nadelson's belief that Reed knew what was happening and was devastated. Taping a TV program in Moscow toward the end of his life, Reed told the audience, "We are not too old. I know how old you are and I think we should be symbols to the young people." Nadelson describes how "he then did a little dance routine to the tune from 'Ghostbusters' and the audience, in a desultory way, joined in. It was one of the saddest things I ever saw."

A red-diaper baby from Greenwich Village, Nadelson is fully aware of her own political biases and misgivings. On her first trip to East Berlin she finds herself having to stand in line to get into a record store not because the store is full, but because you need an orange basket to be admitted and there are fewer baskets than there are people. Observing the inefficiency of this system, Nadelson realizes that "right there in the dreary record shop, I lost whatever was left of my political virginity, of any vestige of the socialist fantasies I was raised on." But what makes "Comrade Rockstar" compelling is its portrait of revolutionary change that took place in the Soviet Union and its occupied lands toward the end of the Cold War. From her first visit to the German Democratic Republic and the Soviet Union in 1988 to many subsequent trips throughout the '90s, Reed often plays back seat to Nadelson's keen telling of accelerating Westernization. In the end, "Comrade Rockstar" is a travel memoir of a historic time.

Some of Nadelson's strongest passages come when she takes a moment to offer simple descriptions of place -- at the Denver Airport "travelers wander looking for something to do, or to buy, or eat ... everyone was big, handsome and healthy"; tourists in Hawaii have "tanned ... plump flesh, girls in bars wiggled their hips ... everyone drank things from huge pineapples with pink plastic parasols." These images, juxtaposed with the fraying uniforms of the guards at Checkpoint Charlie, the people who say hello to your dog but not to you, the lines streaming out of Moscow's first McDonald's because it's the only place to get real food, offer portraits of East and West that are, in the end, more revealing than any icon.