Hamas and Hezbollah, Lebanon and Palestine, Syria and Iran, the U.S. and Israel: Unless these four pairs of actors turn away from their failed policies, the Middle East will sink further into violence and despair. 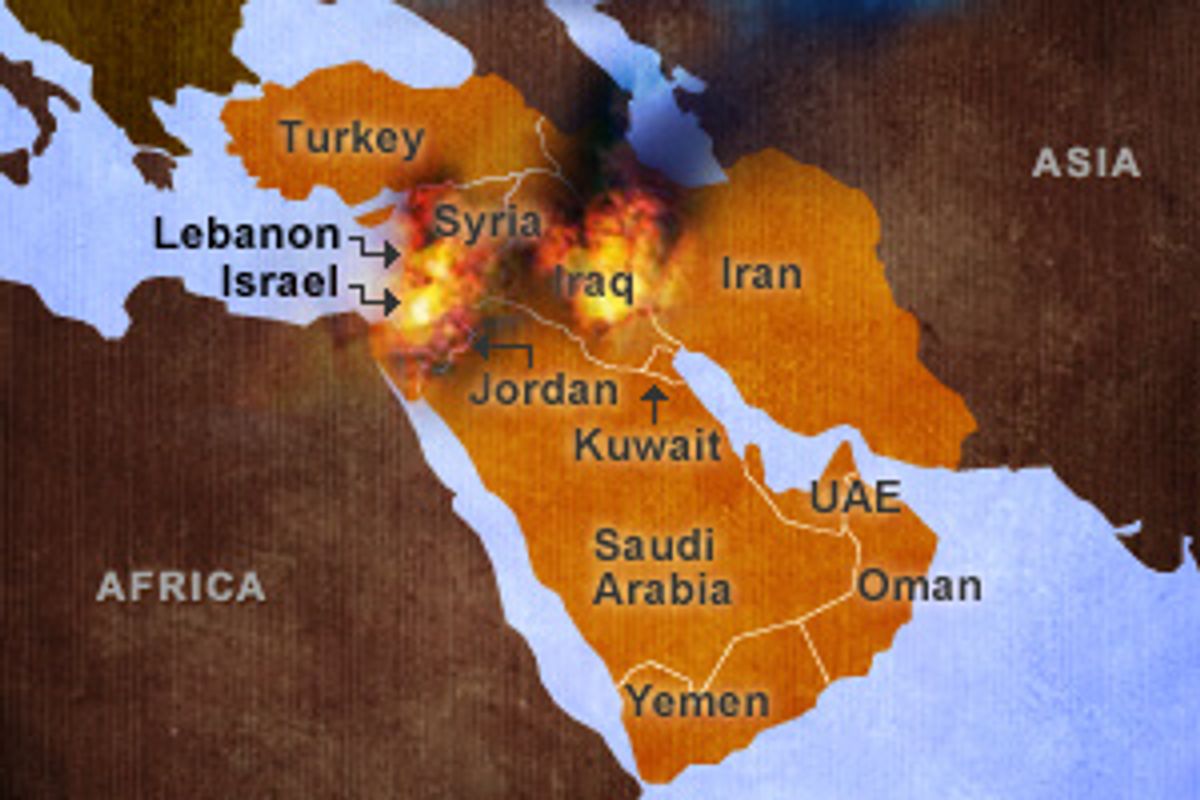 You need to understand the relationship among four pairs of actors to grasp the meaning of the escalating attacks by Hamas, Hezbollah and Israel in recent days. The four pairs are Hamas and Hezbollah; the Palestinian and Lebanese governments; Syria and Iran; and Israel and the United States.

Simplistically, President George W. Bush has depicted this latest round of war as a clash between good and evil, while the Israeli government has tried to blame Palestinians and Lebanese who only want to make war against a peace-loving Israel. The more nuanced and complex reality is that, collectively, these four pairs of actors play roles in the ongoing fighting, as we witness the culmination of four decades of failed policies that have kept the Middle East tense, angry and violent.

Hezbollah and Hamas emerged in the past decade as the main Arab political forces that resist the Israeli occupations in Lebanon and Palestine. They enjoy substantial popular support in their respective countries, while at the same time eliciting criticisms for their militant policies that inevitably draw harsh Israeli responses. We see this in Lebanon today as the Lebanese people broadly direct their anger at Israel for its brutal attacks against Lebanese civilian installations and fault Palestinians, other Arabs, Syria and Iran for perpetually making Lebanon the battleground for other conflicts -- but more softly question Hezbollah's decision to trigger this latest calamity.

It is no coincidence that Israel is now simultaneously bombing and destroying the civilian infrastructure in Palestine and Lebanon, including airports, bridges, roads, power plants, and government offices. It claims to do this in order to stop terror attacks against Israelis, but in fact the past four decades have shown that its policies generate exactly the opposite effect: They have given birth, power, credibility and now political incumbency to the Hamas and Hezbollah groups whose raison d'être has been to fight the Israeli occupation of their lands. Israeli destruction of normal life for Palestinians and Lebanese also results in the destruction of the credibility, efficacy and, in some cases, the legitimacy of routine government systems, making the Lebanese and Palestinian governments key actors in current events -- or non-actors in most cases.

The Lebanese and Palestinians have responded to Israel's persistent and increasingly savage attacks against entire civilian populations by creating parallel or alternative leaderships that can protect them and deliver essential services. With every new Israeli attack against the Hamas and Hezbollah leadership or the civilian populations, four important things happen, and will probably happen during this round of war: The Lebanese and Palestinian governments lose power and impact; Hamas and Hezbollah garner greater popular support, which enhances their effectiveness in guerrilla and resistance warfare; they expand their military technical capabilities (mainly longer-range missiles and better improvised explosive devices); and the anti-Israel, anti-U.S. resistance campaign led by Hamas and Hezbollah generates widespread political and popular support throughout the Middle East and much of the world.

This is linked to the third pair of actors, Syria and Iran, who have carefully and patiently positioned themselves as allies, patrons, hosts, financiers, armorers and ideological brothers of Hamas and Hezbollah. While these two Islamist groups are primarily driven by local resistance to Israel, and are Palestinian and Lebanese in their basic identity, they both play important roles in the foreign policies of Iran and Syria. We now witness strong convergence between two parallel but linked trends: The sovereign state actors, Iran and Syria, are fighting deadly political battles against Israel, the United States and, increasingly, Europe, while Hamas and Hezbollah fight similar battles against the same foes. It makes eminent sense, from the perspective of Damascus and Tehran, to foment greater troubles now for the United States and Israel along the Lebanon-Israel border. This is an opportune time to strike because Israel is deeply perplexed about how to handle Hamas' resistance in Palestine, and the United States seems unable to offer any policy other than to support Israel's right to defend itself while withholding the same right from Lebanese and Palestinian civilians.

The fourth pair of actors, the United States and Israel, find themselves in the bizarre position of repeating policies that have consistently failed for the past 40 years. Israel has this to show for its track record of being tough: It is now surrounded by two robust Islamist resistance movements with greater striking power and popular support; Arab populations around the region that increasingly vote for Islamist political movements whenever elections are held; immobilized and virtually irrelevant Arab governments in many nearby lands; and determined, increasingly defiant, ideological foes in Tehran and Damascus who do not hesitate to use all weapons at their means however damaging these may be to civilians and sovereignty in Lebanon and Palestine.

The United States for its part is strangely marginal. Its chosen policies have lined it up squarely with Israel. It has sanctioned and thus cannot even talk to Iran, Hezbollah and Hamas, and it has pressured and threatened Syria for years without any real success. The world's sole superpower is peculiarly powerless in the current crisis in the Middle East.

As long as these four pairs of main actors persist in their intemperate policies, the consequences will remain grim. The way to break this cycle is for all actors to negotiate a political solution that responds to their legitimate grievances and demands. Everyone involved seems prepared to do this, except for Israel and the United States, who rely on military force, prolonged occupations, and diplomatic sanctions and threats. What will Israel and the United States do when there are no more Arab airports, bridges and power stations to destroy? The futility of such policies should be clear by now, and therefore a diplomatic solution should be sought seriously for the first time.