The breakup of Sleater-Kinney signifies the end of an era when women made a loud and unapologetic noise -- onstage and in society. 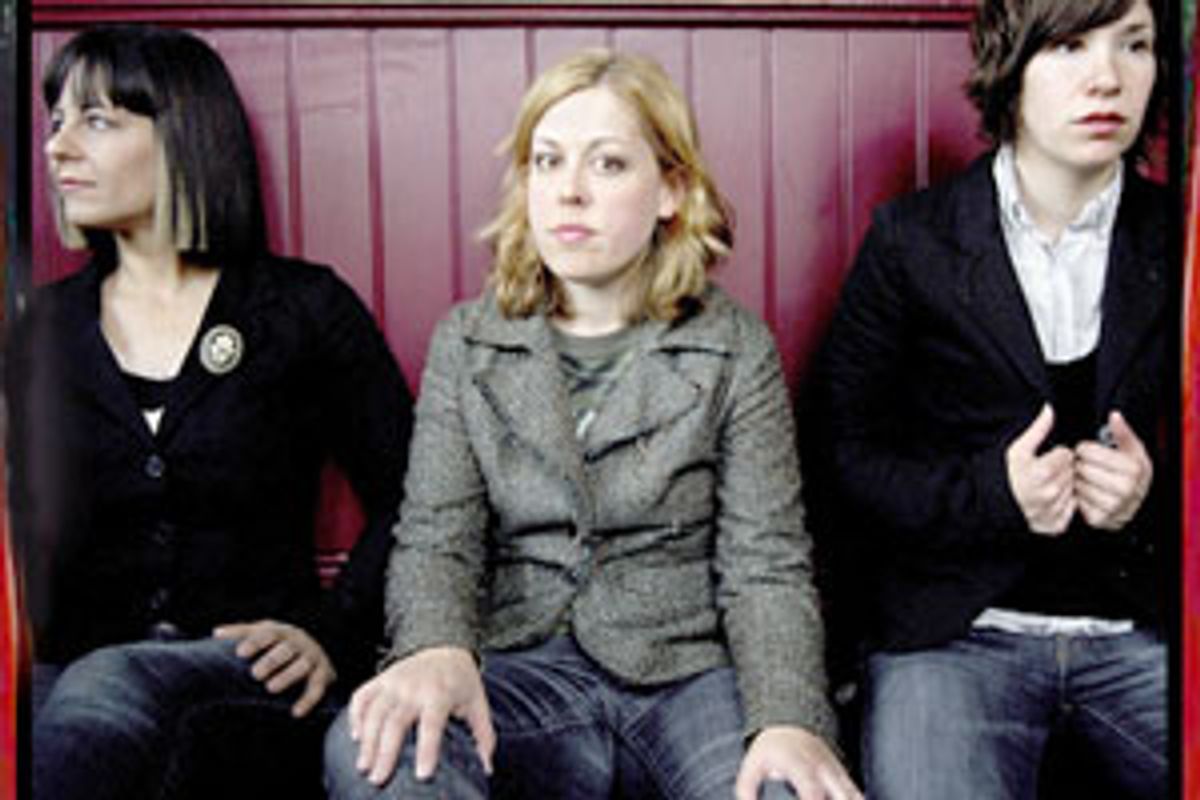 After 11 years, Sleater-Kinney -- arguably the only band born out of the Pacific Northwest's '90s rock boom that is still extant and relevant -- announced they were going on indefinite hiatus last week. When I heard the news, I felt a burning need to see them one last time, though I was mindful of the fact that one must be circumspect when one is 33 and about to utter the phrase "burning need." Surely, one is being ironic. Surely, one has confused the feeling with heartburn. And yet, that feeling just won't quit.

I've been listening to music and going to shows for more than half a lifetime now, watching indie rock devolve into backward-looking, fashion-damaged pop, while the culture grows ever more unwilling to admit feminism did anything but give women delusion, heartbreak and resentment. In this blue moment for indie rock fans and feminists alike, I need to pay my respects to three women whose noise never sounded like anyone else's and kept getting louder and larger the older they got. I need to see that, like vocalist Corin Tucker, you can be a 30-something mother -- a 30-something woman -- and still jump around onstage and smile and yell and unleash a thunder, that you can also exude joy while being tethered to a partner and a child, because increasingly, women seem to think marriage and parenthood mean you agree to bury yourself alive under a mountain of stuff -- state-of-the-art strollers, art-directed diaper bags, and 12-packs of toilet paper. I need to be reminded that my peers and friends are living correctives to those who believe that it's useless to free yourself from the bonds of biology, history and society, and that you can indeed live a life according to principles that pundits with nannies want to make you believe are quaint unworkable utopian relics of the '60s and '70s. I need to watch three women issue a billowing cloud of noise and in doing so defiantly redefine what it means to be female and an adult.

I have seen Sleater-Kinney four times, most recently in London last September. Seeing them in England made me, as silly as this sounds, proud to be an American girl. It brought to mind the Jamesian narrative -- minus the menacing Europeans and our fatal innocence -- of an American girl being a cultural export that astonishes and trumps anything invented in the dusty old convention-bound continent. The Camden concert hall was filled with hipster guys who had come there for the band's bottom-heavy, wall-shaking sound. This wasn't just pretty good for a bunch of girls; this was probably one of the better rock shows we would ever see. My boyfriend, raised on Van Halen and Black Sabbath, was moved to acknowledge their greatness and power. Even better: the inexplicable number of Bob Hoskins look-alikes in the back drinking Foster's tallboys and nodding along approvingly.

Watching these three women play that night I thought: World, we've given you the blues, jazz, Hollywood and rock, and now we will show you a female band that is no gimmick, but an artistic force to be reckoned with. Currently, yes, we're taking the world down with us, but allow us to say that we have given you Sleater-Kinney. Who are not fodder for the wet dreams of pedophiles, like the Runaways and the Donnas. Who are not, like the Bangles or the Go-Gos, making pretty, flashy guitar pop with retro touches. Or Debbie Harry or Chrissie Hynde out front with a wall of nameless, faceless suits behind them. Here are three individual, indispensable parts: Carrie Brownstein and Corin Tucker on vocals and guitars with Janet Weiss on drums.

Here, back home, it has been very hard to shake the feeling that all the gains, political and cultural, of the previous decades are being reversed. Sleater-Kinney -- friends and artists whose friendship and art has nothing to do with expensive shoes and self-deprecation -- are quitting when they seem most necessary. Combat boots have long since been exchanged for stilettos. It's still men who write and direct the movies that my demographic flocks to, who write the books that are most read and lauded -- and when women write novels now, there's the ever-present danger that just by virtue of its treating the female, the book will be categorized as chick lit. The New Yorker and the New York Times are giving prime real estate to women -- Caitlin Flanagan and Maureen Dowd -- who refuse to accept or acknowledge the fact that feminism worked and can still work, who ignore the fact that many women in my generation are being loved and married precisely for their intellect and strength and that we live lives as the equal of our husbands and partners -- and in ignoring those facts, in ignoring lives other than their own, they are halting progress. What happens to women, unless you're Terri Schiavo or Britney Spears, seems to be of no concern to the government or the public.

How to account for this backlash? Did it seem like the '60s had won all our wars against discrimination and inequality? Was it the record companies' realization that alternative rock would not make them rich? Can you even believe that Roseanne Barr had a long-running show on network television? And Lilith Fair! Oh, Lord, remember Lilith Fair? Who ever thought that one day there could be nostalgia for Sarah McLachlan and the Massengil-meets-Celestial Seasonings vibe of her tribal gatherings? It may be that third wavers are partly at fault -- that we became so comfortable in the world our mothers had made for us that, during the complacent Clinton years, never dreaming that there would be such a thing as George W. Bush, we decided to play around with theory and vibrators, and became so infatuated with the personal that we forgot that maybe we should spend some time tending to the political. And just when we need to wage war against the right wing, we're also losing a soundtrack to that fight. Which means that the '90s are officially over, and it might be a while before there's another comparable surge of challenging, exhilarating female voices. Exit Sleater-Kinney.

Confession: While I find Sleater-Kinney necessary now, I didn't come to them until 1999's "The Hot Rock." I was never a punk fan, and I couldn't get past the shrill bleat Corin Tucker began with. Also, the riot grrrl movement that they came out of -- lowercased radical feminism that gave men, those powder kegs of violence and selfishness and aggression, no benefit of the doubt -- sounded like dogma couched in terms of the playground taunt, and a sloppy, bratty presentation didn't seem the best way to convince your opponents that there needed to be change. I shied away from the scene for some of the same reasons I finally rejected Sassy: The furious jazz of opinion in the magazine made Seventeen read like Vogue, and it felt, finally, like a sorority of name-dropping queen bees lording it over the lit mag. The feminists who spoke to me in college were dead white females: the prose of Mary Wollstonecraft, Simone de Beauvoir and Virginia Woolf was majestic and elegant, and they taught me how to analyze and argue (making Jennifer Weiner's recent campaign to legitimize chick lit farcical). Among the living there was Courtney Love, because she was fiercely intelligent and you could hear her affinity for Stevie Nicks under the rage, which I admit now might have been sham, and Liz Phair, because I liked my fury tempered by songcraft. Liz Phair admitted to wanting what she called all the stupid old shit, like letters and sodas. Like Mary Wollstonecraft, she hoped for romance between equals. Which I was hoping for, too.

It turns out Phair and Love were false idols. Liz Phair has in recent years infamously and unashamedly reduced herself to singing the praises of younger men and their hot white cum, which, to hear her tell it, has the age-reversing effects of La Mer. Courtney Love -- well, the latest indignity is that she has been reduced to hooking up with Linda Perry, the songwriting Svengali employed by Pink and Christina Aguilera, and while those two may be as close to feminist as pop will allow, they never had any alt-rock cred to squander. Phair and Love both had plenty of musical ambition -- you can't write and play a line-by-line response to "Exile on Main Street" or put playing Wembley Stadium, in London, on a to-do list without it -- but maybe also toxic levels of self-regard. Love crowned herself the goddess of Mt. Olympia, coming down to earth only to snatch up a husband and talk smack about her contemporaries; Phair always seemed like the girl who preferred to be the lone dame among men. Perhaps they wanted to be famous more than they wanted to be great rock musicians.

Sleater-Kinney, however, have never wasted time running other women down or gunning for chart placement. While Phair and Love have been falling apart, they've been pushing themselves as a band, making each record richer and more complex than the last. As they've grown up, so has their music. It's true that some songs, particularly the earlier ones, can resemble poems written for extra credit in your intro to women's studies class. But they learned how to fuse vulnerability and girl group jubilance with wildness and ferocity; to embody both Jane Eyre and the madwoman in the attic. On their last record, "The Woods", they anchored songs about love's terrors and pleasures to riffs as heavy as anything let loose by the Who and Led Zeppelin, and the torrent blasted away all the anemic indie rock being made by sensitive yelping boys and faux naifs helming glockenspiels. You're no rock 'n' roll fun, Jeff Tweedy and Thom Yorke, they might have said to themselves. We are not ashamed of our love of the loud. We don't think these instruments have been exhausted in their capacity to give us, and other humans, joy.

"The Woods" opens with "The Fox," a fable about predators and prey. But when I listen to the song the only lyric I hear is Tucker rearing back and announcing, "Land ho!" The female condition may never be extrapolated by audiences into something approximating the human condition. But when Tucker shouts those two words, it's as if she's looking hopefully over the horizon, convinced there are ideals out there that can be realized. At least that's what I like to pretend. I know musicians don't owe us self-actualization or revolution or truth, and when they do make that their business, it often results in inferior art. All they owe us, as the theorists say, is pleasure. But I was raised a Christian, and grew up imparting a saving power to the act of standing in a crowd before a band. Shows have always been like church services to me, even when I regularly sat in sanctuaries. I no longer go to church, but I still believe in feminism, and I still believe in the saving power of rock music -- when politics fail to help us realize a new heaven and a new earth, as politics often do, records, those reminders that there are other dreamers out there, are often all we have.