Is the upcoming "Snakes on a Plane" another sign of Hollywood's demise or a triumph of the blogosphere -- or both? 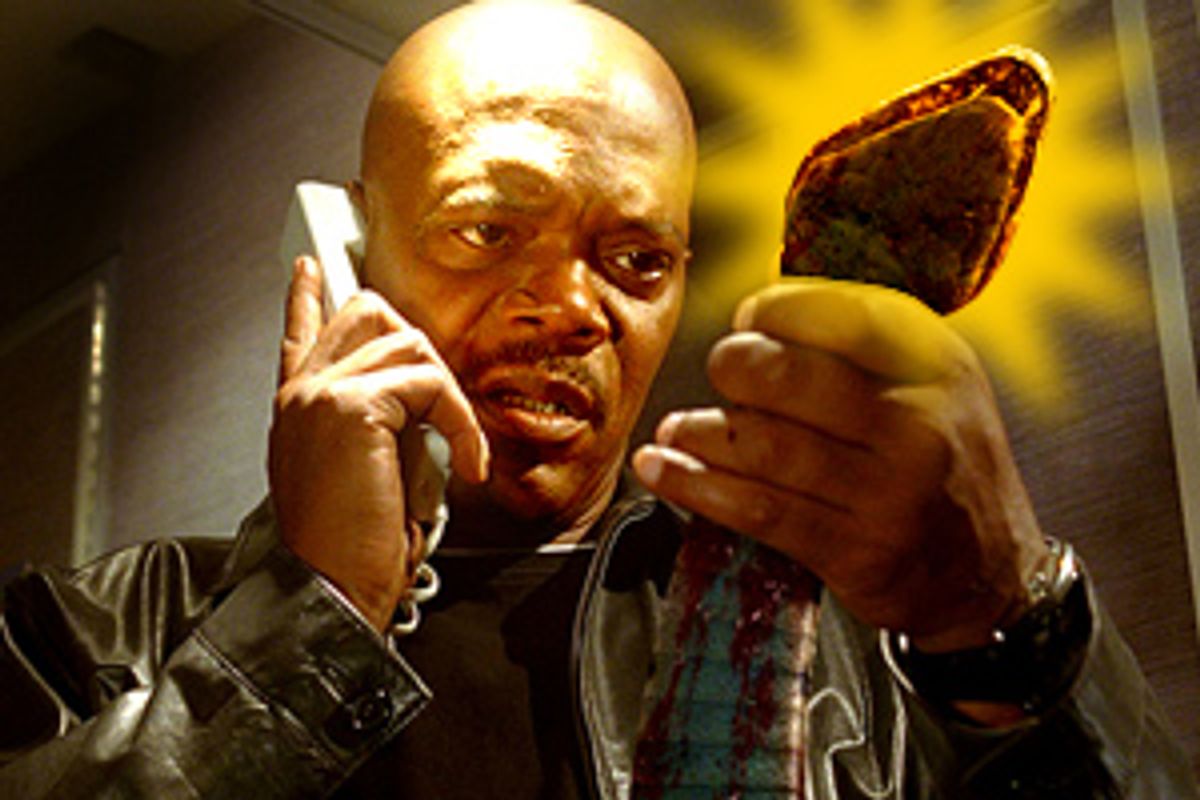 If you were in the audience for the opening-day screening of "X-Men: Last Stand" last May, you would have seen a movie preview that begins with a series of silent, ominous title cards:

"AS THE SUMMER MOVIE SEASON BEGINS / YOU WILL HAVE THE OPPORTUNITY TO SEE / MOVIES THAT WILL HAVE / HUGE STARS / SWASHBUCKLING PIRATES / ELABORATE CODES / INCREDIBLE SUPERHEROES / AND ANIMATED ADVENTURES / BUT THERE'S ONE THING / WE GUARANTEE YOU THEY WON'T HAVE  / SNAKES / ON A PLANE."

Seeing this trailer on the big screen was, for much of the audience, the culmination of months of rumors, party conversations, YouTube searches and endless jokes. It was a moment of collective consciousness on a par with the "Lazy Sunday" phenomenon. The word "snakes" was greeted with applause more raucous than for the feature presentation itself. The clapping exploded into arena-rock-caliber cheering because with every clap, each person in the audience realized that the person next to them saw what they saw. Snakes. On a plane.

Was being in the theater that day like seeing the Stones at the Altamont, or watching Lloyd Bentsen tell Dan Quayle that he was no Jack Kennedy? Were we part of one of those cultural high tides recounted romantically by Hunter S. Thompson? "Snakes on a Plane" is no Altamont, that much is certain. But it is a phenomenon unlike any other. For those who are unfamiliar with this surprise hit -- this improvised explosive device on the highway of pop culture -- let this article break the seal and pop open the can of Snakes. On a Plane.

Although its anticipated cult status is high, the film doesn't seem to have been created as a ready-made cult classic. It began like many other action films, as a god-awful B-movie script with a simple premise and simple thrills that needed some rewrites. It was filmed to be a PG-13 snoozer with the working title "Snakes on a Plane." A groundswell of Internet love for the title emerged. The title was changed by New Line Cinema to "Pacific Air Flight 121." The Web erupted into e-riots. The studio, realizing the golden, rotten egg upon which it sat, restored the original title and shot new sequences to push the rating from PG-13 to R.

And like a snake shedding and re-shedding its skin, "Snakes on a Plane" was born and reborn.

Everyone who hears about it loves "Snakes on a Plane." And yet no one has actually seen it. There are countless homages and parodies of all levels of production value on the Web that millions have enjoyed -- from film mash-ups using previous footage of Samuel L. Jackson and nature shows, to camcorder images of white college-age males in their garage. None of these are based on the movie. This preemptive attack of fandom was caused by the four syllables that make up the title.

The appeal of the title does not derive from its simplicity or its specificity but rather from the existential truth of it. It's as if the author read the screenplay aloud to his two sons and asked them what the film should be called. The first son might reply, "Death Flight! Wait, wait, no! Poisonous Air!" The second son, if he were autistic, would reply, "Snakes on a Plane." The second son would be right.

Many think that "Snakes on a Plane" is a phenomenon because its title is immeasurably stupid. This is untrue. Keeping with the analogy about the two sons, the autistic son has a clearer, if more unromantic, grasp on the essence of the movie than the first. This clarity is at the root of the phenomenon. People are fascinated with the idea of the film precisely because of the title's lack of artifice. This is because all the really bad movies have really good titles. The correlation is so strong that most media-savvy moviegoers can judge the quality of a movie by the slickness of its title alone. "ConAir." "Species." "Anaconda." Across the aisle, film buffs lovingly embrace the awkward linguistic gropings of the art-house title. "Born Into Brothels." "An Inconvenient Truth." "Breakfast on Pluto."

The underlying assumption here is that if a movie is an underwritten, overproduced turd kept afloat by an evil and powerful network of producers and distribution studios, the title has probably been expertly cleaned and perfumed to a degree greater than or equal to the shittiness of the film itself. A good title is the smooth gelatin capsule within which the feces will be swallowed. Conversely, the assumption about the art-house film title is that it was revealed by the Muse and banged out on an old typewriter by a frenzied author clutching a cigarette in one hand and a bottle of Jack in the other. Thus when people see a super-slick title, they are understandably wary. Like Indiana Jones' Holy Grail, good things almost never come in good packages.

On one level or another, people do understand that blockbuster movies are less than their titles would have you believe, and the difference between "Species II" and "Sexy Alien Lady Again" represents a deception of the public by the film industry. It's a deception we willingly go along with. This is mostly because it seems better to be deceived by Twentieth Century Fox into watching "Glitter" than to be deceived by your government into believing that a war was justified. Maybe.

The producers of "Snakes on a Plane" tried to keep up appearances by surreptitiously changing the title to "Pacific Air Flight 121." The public, including star Samuel L. Jackson, was understandably outraged. By then we had already received the revelation of "Snakes on a Plane," and the producers were foolhardily trying to put the scales back over our eyes. If the title had stayed "Flight 121," it would have ended up in the dustbin of bad, bad movies. But the studio reinstated the old title, turning bad movie into cult classic.

This reveals the meaning of the cult classic. The C factor lies not in the shittiness of the film but in the agreement between moviemaker and moviegoer on the film's shittiness. The moviegoer goes to see a movie and thinks, "Wow, this movie is going to be terrible for X, Y and Z reasons." The bad movie delivers reasons X, Y and Z. The cult film responds, "Oh yeah? You think you know X, Y and Z? We're gonna show you some X, Y and Z!"

Thus the moviegoer's love for "Snakes on a Plane" is not infantile, because in New Line's decision to reshoot and repackage the movie to suit public demand it looks as though Goliath has lain down before David. This is scary not only for all Goliaths out there but also for critics, like Chuck Klosterman, who worry that filmmaking is becoming a spectator sport. The film should be an unadulterated nugget of gold presented by the artist and enjoyed by the viewer, they contend. How dare movie studios treat the blogosphere as a massive focus group, and their movie as a product to be sold? For shame!

Except that is exactly what a movie is. A studio-produced film does not hit the silver screen without being shown to test audiences multiple times and shaped by people with MBAs who love box and whisker charts. Most comedy writers and directors use audiences like guinea pigs, running them through the jokes and analyzing the size and timing of their laughter -- then re-editing and re-presenting everything to a new set of guinea pigs. Sure, it's a dirty shame that studios treat movies like soda and audiences like taste testers. But "Snakes on a Plane" is neither the first nor the last time it will happen. If viewers want a movie that hasn't been run through the market research grinder, they are invited to see John Waters' most recent film, "A Dirty Shame" -- a pure, uncut gem.

But "Snakes on a Plane" as a concept is not a reaction to John Waters; it is a reaction to Jerry Bruckheimer. The appeal of "Snakes on a Plane" has nothing to do with the dignity of honestly produced bits of cinema; it has to do with the shamelessness of the studio film. It has to do with the changing standards of the people who watch and make those films. Those standards have not been lowered. Standards have actually become more stringent -- in the sense that the blockbuster audience wants a film with more and more flavor and fewer and fewer calories, and the movie studio works tirelessly to create the perfect soft drink.

In this sense "Snakes on a Plane" is more than just a title and more than just a cult movie. It's an exposure of the inner workings of Hollywood. It's an admission on the part of movie writers, directors, producers and distributors that this movie is, as Samuel L. Jackson has put it, "Motherfucking Snakes on a Motherfucking Plane!" Through a tiny crack in the façade of the movie industry, moviegoers saw that the industry itself doesn't believe in its own magic. It's not just that the emperor wears no clothes when he parades through the streets; it's that everyone inside the palace freely admits that he's naked.

This is why "Snakes on a Plane" turned into Snakes on a Plane. It is shorthand for that crack in the façade. It is the exposure of what philosopher Theodor Adorno called the culture industry. "Movies and radio need no longer pretend to be art," Adorno wrote in his essay "The Culture Industry: Enlightenment as Mass Deception." "The truth that they are just business is made into an ideology in order to justify the rubbish they deliberately produce." Scathing words from the 20th century's hardest-working pop-culture hater. But while Adorno was right about the cause, he was wrong about the effect. He probably thought that the public's pulling off the movie-industry product label ("New Movie") and exposing the label underneath ("Fresh Turd") would inspire riots, not fan clubs. Even Adorno can't be right every time.

Americans don't just love the culture industry; they fetishize it. But Americans are also savvier than most theoreticians believe. The lamest and most transparent attempts of the culture industry to deceive us are defeated not by outright rejection, but by assimilation. The worse the slogan, the better the T-shirt. A secular humanist wearing a T-shirt that says "Jesus Is my Homeboy!" is the same as a movie fan loving "Snakes on a Plane." It's an act of dissent that also strangely supports the establishment. It's like cheering for the emperor's nakedness.

Can we cheer the wall down? Probably not. The criticism and the impossibility of criticism are both part of Snakes on a Plane. The power of this phrase is manifest everywhere. It is more than just something for you to scream on a crowded flight during rush hour; it is a Zen koan for pop-culture enthusiasts, a question and an answer in one. In conversation it has become a response to unanswerable questions and a universal declaration of the unknowable. Question: "Why would anyone want to steal my old, ugly bike?" Answer: "Snakes on a Plane, right?" Statement: "Al Jazeera reported that the Haditha killings are Iraq's My Lai massacre." Declaration: "Dude. Snakes on a Plane." What is the sound of one hand clapping? "Snakes on a Plane."

Aemilia Scott is a writer living and working in Chicago. She writes regularly for Flak magazine.