Not such a grand old party 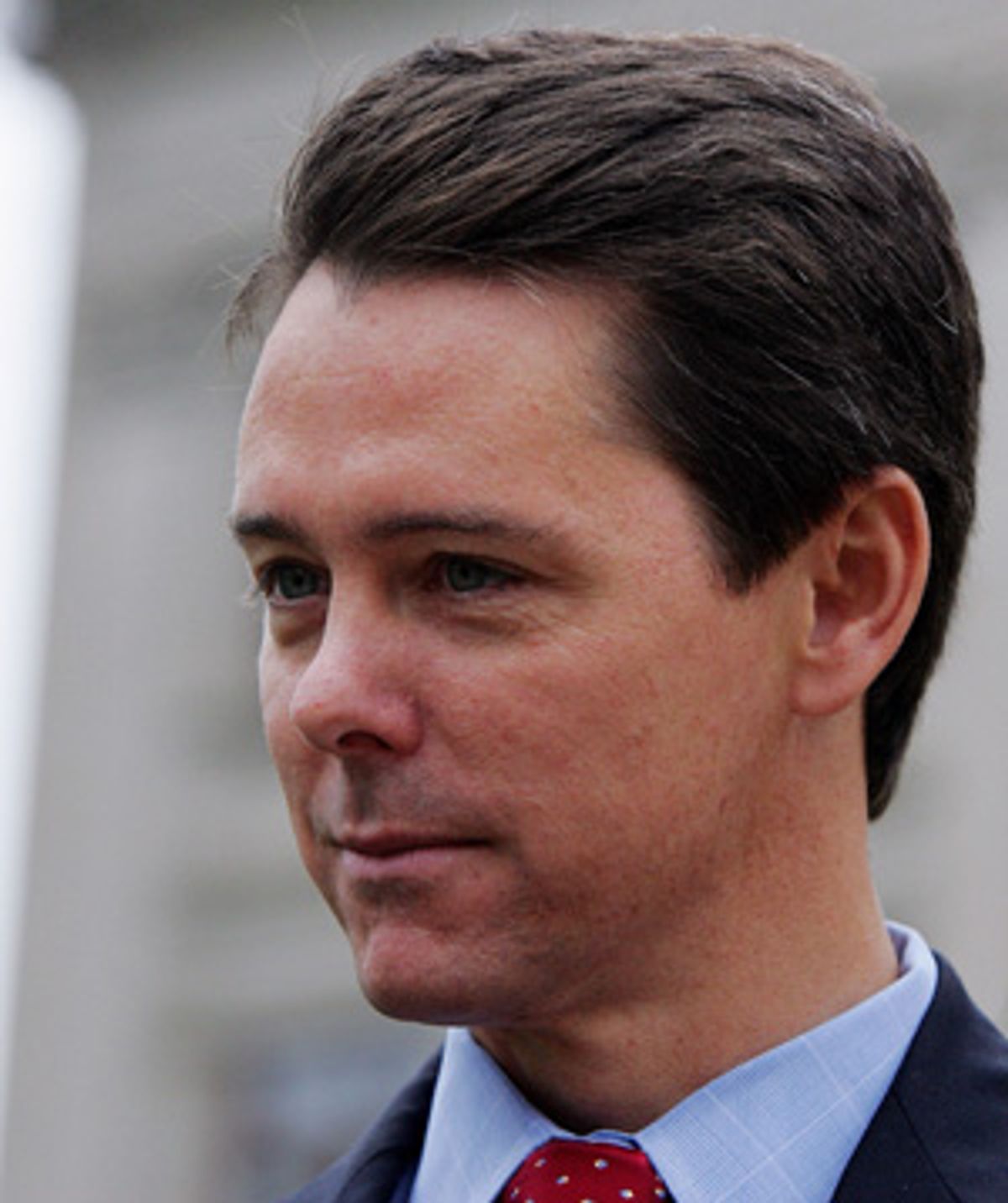 In the end, Ralph Reed couldn't even fill a room. None of the boldface names who'd once embraced him were present, nor was there much sign of his diminished fundamentalist base. Tuesday night, less than three hours after the polls closed and with more than half the precincts still unreported, Reed -- deemed an almost unstoppable force when he declared his candidacy for Georgia lieutenant governor -- stood, flanked by his teary-eyed wife, Jo Anne, and four children, to concede defeat before a half-empty ballroom of downcast loyalists and representatives of the hated media.

The setting for Reed's defeat, the posh new Intercontinental Hotel in a tony neighborhood near downtown Atlanta, was itself symbolic. GOP candidates often throw their election-night bashes in the suburbs. Reed's campaign -- conducted by a self-styled political outsider who was, in fact, the ultimate political insider -- was waged on two very different fronts. On one hand, the money poured in from the same national web of Republican donors who had once turned out their pockets for Reed the political consultant's clients. Former New York Mayor Rudy Giuliani stumped for him; the GOP's favorite Democrat, former Sen. Zell Miller, unleashed his famous acid tongue on Reed's behalf; Home Depot founder Bernie Marcus kicked in the bucks to help launch the campaign.

On the ground, the campaign was far less glitzy. The handshaking took place at churchyard barbecues and small-town meet-ups in places from the Appalachian foothills to the piney flatlands of southern Georgia. Shunning the "liberal media," Reed depended on local editorials and the conservative evangelicals he had so successfully courted as wunderkind architect of the Christian Coalition and then chairman of the Georgia Republican Party. It was the same formula he had used to steer other politicos to success. He blasted the press and trumpeted his antiabortion, antiliberal credentials.

But Tuesday night, as early arrivals milled about under the glittering skylights of the Intercontinental, outnumbered by reporters, there was a sense of foreboding even before the first results rolled in. Missing, along with Miller and Giuliani and the celebrities, were the kind of Christian Coalition stalwarts known to shake their fingers at the media at Reed events. They hadn't showed up at the party, and they hadn't showed up at the polls.

The loyal foot soldiers knew whom to blame. "He's on all the front pages of the papers in New York, here, everywhere," fretted Roger Keltner. "They're definitely out to get him." The genial, middle-aged Reed supporter had driven up from Atlanta's southern suburbs for the event. "It could end up helping him ... or it could be the kiss of death."

"It," of course, was the unmentioned scarlet letter: "A," as in Abramoff. The disgraced lobbyist's legacy loomed over every conversation. For months, Reed and his campaign had repeated their mantra that Reed was unaware that the $5 million funneled to his high-powered consulting firm, Century Strategies, to fight casino gambling was provided by casino-owning Indian tribes seeking to protect their interests. That he had no idea his pal Jack Abramoff had enlisted his help to defeat congressional legislation regulating Internet gambling on behalf of an Internet gambling company. That his opponent in the primary, Casey Cagle, was misrepresenting what Reed and Abramoff had tried to do in the Mariana Islands. They were working to protect free trade -- not, as a withering campaign ad charged, to protect child prostitution and forced abortion.

"Nobody pays any attention to all that except those guys' papers," said a heavy-set young man, smiling tentatively as he nodded toward a platform filled with TV cameras and technicians at the rear of the room.

But the whistling-past-the-graveyard tenor was hard to miss. While the disdain for the press was still apparent, the refrain of "traditional conservative values," repeated by virtually everyone queried about their motivation in turning out for Reed, was accompanied by wan smiles.

"I think he'll come through," said a short, white-haired woman reaching for a cheese canapé from one of the endlessly circulating servers. "People in Georgia know who Ralph Reed is ... they don't believe all that stuff."

"I guess we'll just see," shrugged Ole ("Oh-lee"), a gravel-voiced Oklahoman turned Atlantan in matching ostrich-skin vest and boots and crisp Panama hat, as he perambulated through the crowd. "There's been a lot of talk, though."

Much of that talk came from within the Republican Party. Twenty-one of Georgia's Republican state senators signed a letter urging Reed not to run. Reed's opponent, Cagle, who had initially pledged to "run on the issues," eventually used the conviction of Reed's chum Abramoff and revelations of Reed's complicity with Abramoff exposed by the Senate's Indian Affairs Committee to unleash brutal TV and radio attack ads.

"Ralph Reed's attacks on me, well that's just politics," said one recent Cagle ad, which ended with the candidate hitting where it hurt: "Ralph Reed sold out our conservative values."

By 8:30 p.m., former state House Democratic Majority Leader Larry Walker and his entourage were easing into chairs at the cocktail lounge near the Intercontinental's front door.

"I've got a feeling Casey's going to pull it off tonight," said Walker, a rural Democrat who thought about switching parties but quit the House instead. "We're going to go up the street to Sonny's party," he smiled, referring to the nearby soiree where another erstwhile Democrat, incumbent Republican Gov. Sonny Perdue, was celebrating his primary steamrolling of an unknown challenger.

Back inside the "victory party," few were watching the TV sets anymore.

"Don't worry, there's still plenty of time," said one evening-gowned woman to her young companion. Nearby, a well-groomed young man clapped his friend on the shoulder as the latter turned abruptly to leave. "Trust me!" he said sharply. "We can still pull this out!"

But by 9:30, Reed's press deputy, Lisa Baron, had quietly given up. "It's over," she said, the strain of her pale, pretty face accentuated by her jet-black hair and black sheath dress. "The numbers from Cobb [a heavily Republican county north of Atlanta] just aren't there."

She wrapped an arm around her husband, a recently axed classic-rock disk jockey named Jimmy Baron, and smiled bravely. "Well, now neither of us have a job," she said.

The crowd seemed to thin still further while the TV cameras lit up and clustered near the double doors. As Reed and his family moved in, an oddly rhythmic applause built up -- two beats per second, in time -- as he moved to the podium.

In contrast with his family, Reed seemed relaxed. The 45-year-old's oddly youthful face was ruddy and full. "Tonight, my campaign comes to an end," he said. "But the values for which you fought and the governing philosophy will go on and on."

Eschewing his customary attacks on the media, Reed pledged to support the Republican ticket in November, including opponent Cagle ("Not me!" shouted an onlooker, to laughter), and decamped.

As Reed left the stage, Salon asked him whether that support would translate into active campaigning for the GOP in the November elections.

"I will," he insisted. "I'll get back on it!" He probably will. Reed has made improbable comebacks before, and he can begin by deploying his considerable skills as a political strategist -- who "paints my face and travel[s] by night," as he once described himself -- in the service of the state party's nominees. Even if, as is true, most of them either wished for or worked for his defeat.

His troops were less conciliatory. A tired-looking Ric Mayfield smiled ruefully as his Ralph Reed sticker curled up from his lapel. He said it would take a few days for some of his fellow loyalists to rally to Reed's call to support the Republican ticket. "It's been a tough campaign," he sighed. "The attacks were just relentless. In a way, that got our people even more excited about the campaign, but we just couldn't overcome it."

Greg Land is a staff reporter for the Fulton County, Georgia Daily Report and a former writer for the Atlanta alternative weekly Creative Loafing.