Masters of ambiguity, Iran's leaders don't want war with Israel and the U.S. -- and are more alarmed by the Lebanese crisis than the West realizes. 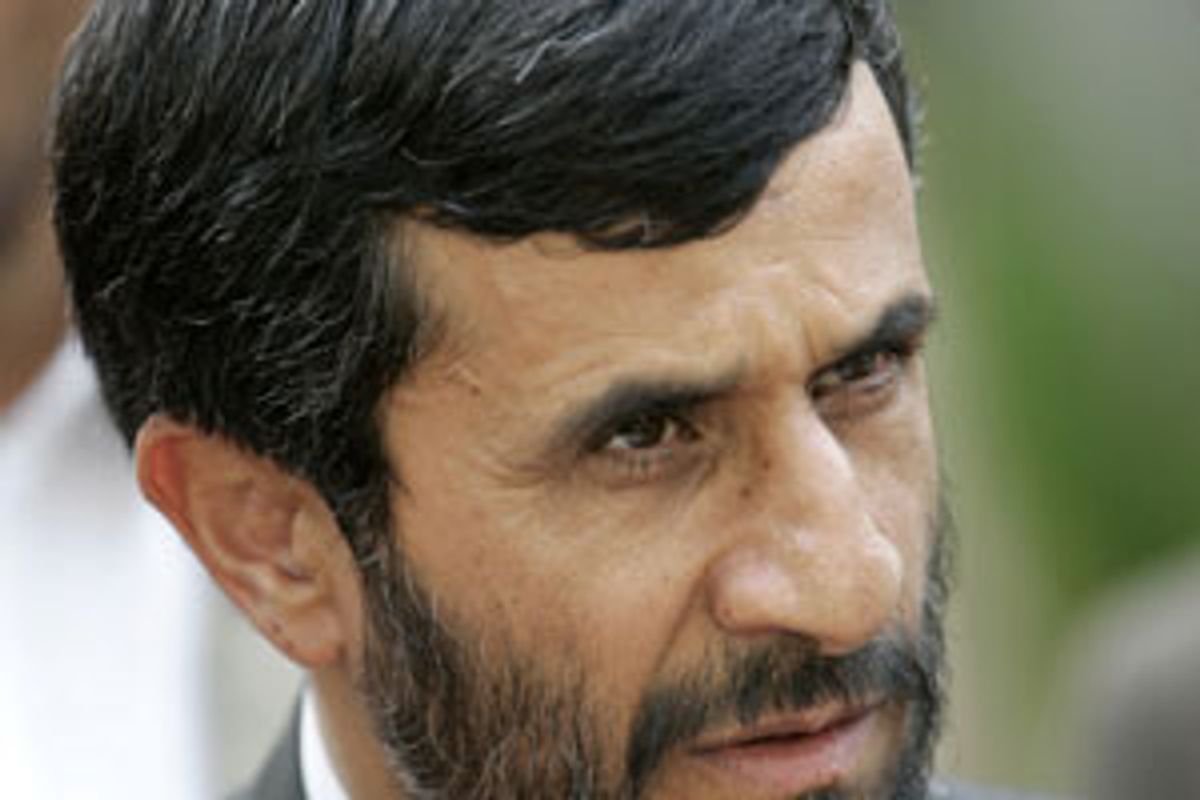 On the sidelines of a recent security conference in Oman, a former high-ranking Iranian official turned to a Saudi colleague and said: "You are overestimating our influence in Iraq. We are not as powerful as you think." A few moments later, the Iranian smiled and added, "But don't underestimate our influence, either."

Such calculated ambiguity has become a familiar feature of Iranian foreign policy, particularly regarding its role in Iraq, its nuclear stance and, of course, its support for Hamas and Hezbollah. Sometimes the ambiguity approaches something resembling sophisticated statecraft; at other times it looks amateurish, like "bazaar diplomacy."

Amid the ongoing Hezbollah-Israel war, the ambiguity has been on full display: Iran, on the one hand, denies accusations that it is playing a role in the conflict, while publicly declaring the Jewish state unsafe from Hezbollah rockets and pledging to stand by Hezbollah.

Israeli Prime Minister Ehud Olmert finally spoke out about Iran on Tuesday, explicitly charging it with complicity in the Hezbollah cross-border raid that led to the kidnapping of two Israeli soldiers, the killing of eight, and the furious fighting that has left hundreds of Lebanese and dozens of Israelis dead. He said that Iran chose the timing to divert attention from the G-8 meetings in St. Petersburg, Russia, where Iran's nuclear program was expected to be high on the agenda. "Unfortunately, Iran's trick succeeded," he said. "Everyone now remembers the G-8 decision on the Lebanese issue and fails to deal with the Iranian issue."

Most major news outlets seem persuaded by that argument, though as veteran Middle East analyst Anthony Cordesman told the New York Times on Wednesday: "Until there are hard facts, Iran's role in all this is a matter of speculation, and conspiracy theories are not facts or news."

Today, as Lebanon burns with the fire of Israeli barrages, northern Israeli cities face the fire of Hezbollah rockets, the prospect of a wider war looms, and Israeli accusations mount -- the Islamic Republic of Iran no longer has the luxury of calculated ambiguity. The world wants to know: where does it stand? In Damascus on Monday, Iranian foreign minister Manoucher Mottaki called for a cease-fire and a prisoner exchange. An Arabic newspaper said he urged Hezbollah to take the first step. The Lebanon fire is getting too hot for Iran. It doesn't want a shooting war with Israel, which would be a losing proposition: Israel's military superiority, coupled with the inevitable U.S assistance, would overwhelm Iran's defenses. Make no mistake: It would be no cakewalk for Israel or the United States, but the Iranian leaders are not eager for this fight.

Indeed, some of Iran's notorious hard-line papers are frustrated by what they view as their government's inaction. Siyasat-e-Ruz wrote: "The Islamic Republic of Iran shouldn't restrict its reaction to the Lebanese crisis to blaming Israel or staging demonstrations." It should "support Hezbollah logistically and give it essential information ... in order to drive the missiles into Tel Aviv." Kayhan, the leading daily of Iran's hard-line camp, wrote: "We wish Israel's lies were true. The officials of the wild Zionist regime allege that Iran has equipped Hezbollah with long-distance missiles and Iranian officials honestly deny these allegations. They are right to do so. Because, to be honest, this is the sad truth." Whether Kayhan is telling the truth, or engaged in some sort of clever double game, the result is the same: Iran doesn't want a heavy footprint in this war.

Intelligence estimates note that Iran provides Hezbollah about $100 million a year in funding (less than half a day's oil income), and an arsenal of missiles and rockets to the Shiite Lebanese group (it's worth noting that Hezbollah raises more money from the global Shia Lebanese diaspora than from Iran). Sheik Hassan Nasrallah, the Hezbollah leader, regularly consults with Iranian officials, though he has staked out in recent years an increasingly assertive and independent stance that runs contrary to the idea that he simply takes orders from Tehran.

The relationship between Iran and Hezbollah is more complicated than the simplistic depiction of master (Iran) and servant (Hezbollah) that's prevalent in some quarters. Indeed, it is not unlike the relationship between the United States and Israel: They both have common interests, the larger power provides financial and military assistance, and the two consult closely on regional matters. They occasionally bicker behind closed doors, but the political elite of the larger power is reluctant to criticize the smaller power publicly. Note: Even reformists like former President Mohammad Khatami extol the virtues of Hezbollah.

What does Iran gain from this relationship? By supporting Hezbollah, it burnishes its anti-Israel credentials on the Arab street in an Islamic world largely frustrated by Israel's treatment of Palestinians, projects its power far from home into the heart of the Levant, plays to a Shiite "base" across the Arab and Muslim world that sees Iran as a natural leader, and controls an important "front" (a deteriorating one, right now) in the event of war with Israel or the United States.

There is, of course, also a downside. Iran invites the ire of Israel -- the Middle East's preeminent military power -- and the anger of the United States, gearing up for a showdown over its nuclear program. They also elicit the suspicion of the Sunni Arab elites from Amman to Riyadh, who have been alarmed by Iran's growing influence in Iraq and who, as one Saudi official told me, "don't want to see a repeat of that in Lebanon." In this vein, a new narrative of fear has emerged in the opinion pages of the Arabic media and in the whispering campaigns of the Sunni elites in the ears of Western journalists and impressionable congressmen: An ascendant Iran, the "chauvinistic" Persians, the "bogeymen" Shiites, are spreading their tentacles across the region.

What this thesis fails to understand is this: Iran is a natural regional power. Its land mass, large populace, and military and economic weight ensure it a prominent role in the geopolitical and geo-economic order of the region. The Islamic Republic of Iran -- through inept diplomacy and a poor choice of allies -- is punching far below its weight.

Though the Islamic Republic veers between adventurism and pragmatism, it maintains a general foreign policy constant from the shah's era, and one that would likely remain in a more democratic Iran: the desire to be seen and viewed as a regional power, even a hegemon. Viewed through that prism, Hezbollah is one of several tools at Iran's disposal to project power across Eurasia and West Asia.

Of course, a more democratic or a royalist nationalist Iran would not naturally seek out a Shiite militia; it would seek out different allies, including the United States and potentially even Israel. But this is the Islamic Republic of Iran, and Lebanon holds a special place in the hearts of its elite: In the 1970s, many of Iran's Islamist revolutionaries trained in PLO camps in Lebanon; its creation of Hezbollah in the 1980s is seen as a great foreign policy success; and clerical ties between Iran and Lebanon date back to the 16th century, when Iran first became a Shiite state.

It won't be easy for Iran to simply sit back and watch Hezbollah's destruction. But it doesn't want to pay the price for high-profile involvement in this war either. What to do? Perhaps a bit of calculated ambiguity is in order -- creating the appearance of action, and occasionally doing some tangible things, but not enough to get their skirts caught in this fire. Call it sophisticated statecraft or bazaar diplomacy, but Iran has displayed an uncanny ability to survive -- and haltingly expand its sphere of influence in the meantime.

Afshin Molavi, a fellow at the New America Foundation, is the author of the "Soul of Iran: A Nation's Journey to Freedom."