The "Clerks" sequel explores the enduring qualities of friendship -- and it may be the sweetest movie ever to feature an act of bestiality. 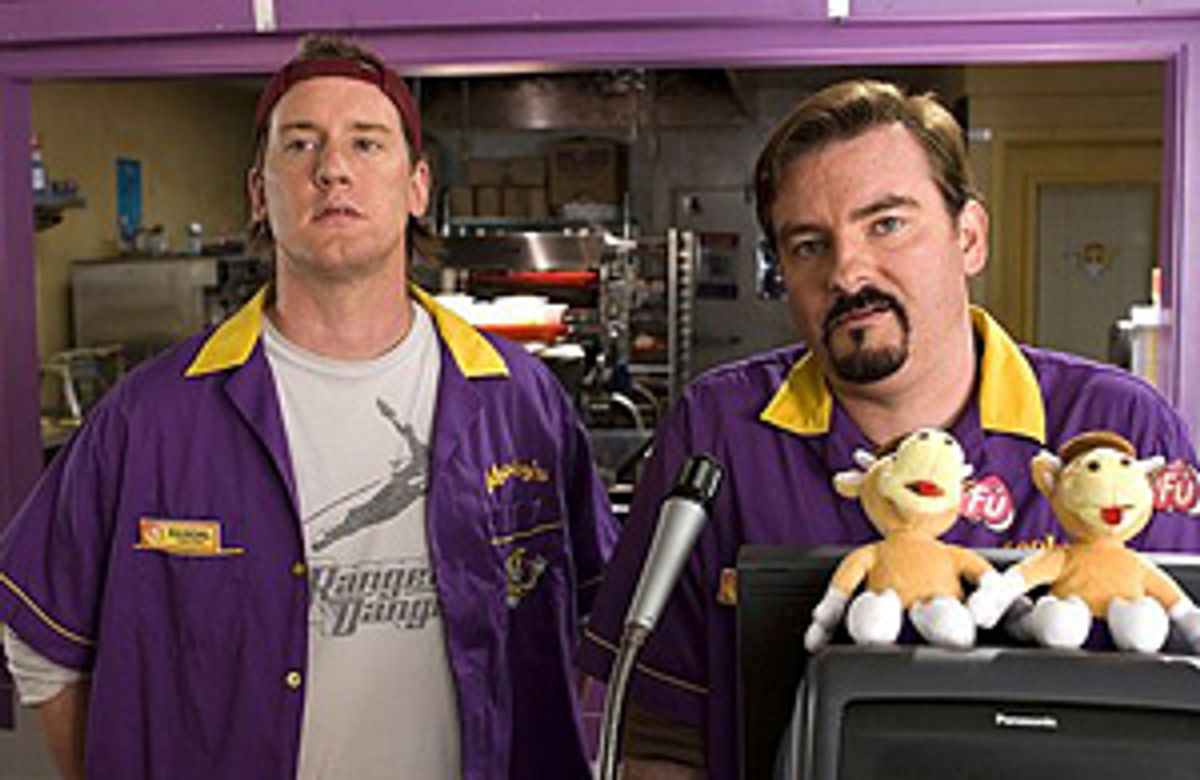 How do you make a sequel to a movie whose characters are headed nowhere? Kevin Smith's 1994 "Clerks" was a slight but potent little picture that captured not just the aura of a particular place -- the corner of New Jersey from which Smith proudly hails, a working-class area very different from the luxe suburbia we see in so many American movies -- but a state of mind: With its ambling rhythms and rambling dialogue, "Clerks" captured the essence of being stuck in the town you grew up in, knowing you should be going to school in order to better yourself but somehow lacking the energy to do so, marking time at a job that demands nothing of you. Dante (Brian O'Halloran) and Randal (Jeff Anderson), clerks at an adjoining convenience store and video store, spend their days trading randomly philosophical observations and making crude jokes: You can't really even call it work. They're not quite sure how their lives are going to shake out, and they're not worrying about it too much -- although even amid all the lackadaisically off-color jokes, the uncertainty of their future hangs over the movie like a slackerish specter.

Smith didn't intend to make a sequel to "Clerks." But in some way, the question of what happens to characters -- to people -- who seem destined only for stasis is too fascinating not to explore. Smith is a sweet-spirited filmmaker, and a blessedly unsnobbish one. And even though "Clerks II" is loaded with coarse humor (as any sequel to "Clerks" would have to be), it also gets at some subtler ideas, about how we're shaped by where we come from, and how, even when it seems we're going nowhere, we're still on our way to becoming something. And "Clerks II" may be the sweetest movie ever to feature an act of bestiality.

Then again, Smith does stage a romantic moment against that act of bestiality, but let's not get ahead of ourselves. At the beginning of "Clerks II," Dante -- now 12 years older, thicker around the middle and the neck, having crept a few years and a few pounds closer to middle age (again, he's played by O'Halloran) -- shows up for work at the Quick Stop one morning, only to realize it's on fire. Randal (Anderson) left the coffee pot on the night before. The two get new jobs at Mooby's, a fast-food joint (its specialties have names like "The Egamooby Muffin" and "The Cow Tipper"), but Dante won't have to put up with it much longer: He's moving to Florida with his fiancée, Emma (played by Jennifer Schwalbach, Smith's wife), a lithe, blond, moneyed ex-cheerleader type who's obviously completely wrong for him. But her parents are going to buy them a house, and they'll give Dante a job, too. As he explains to his boss and close friend, Becky (Rosario Dawson), he's sure that someday Emma will "get" him; Dante naively believes that once people have been married for a while, it's inevitable that they'll drift onto the same wavelength.

It's clear from the start that Becky and Dante are the two who belong together. Even Randal -- a peculiar mix of obnoxious and perceptive, the way longtime close friends often are -- comes to realize it. "Clerks II" has more of an obvious plot than its predecessor, but its real energy comes from the way the characters needle and cajole one another, and from the way some of them betray their absolute cluelessness: Randal, in particular, gets laughs by being unrelentingly annoying. He has Anne Frank and Helen Keller confused, but insists that it's Frank who's the deaf, mute and blind one, and will not accept any other truth. When the others reprimand him for using a racial slur, he digs his heels in further, arguing that his grandmother used to say it all the time; he even tries to "reclaim" it by writing it on the back of his Mooby's uniform in masking-tape letters. Randal is the kind of character you want to throttle most of the time, but you can't help laughing at him: As a character, he's simply an act of inevitability.

One of the great charms of "Clerks II" is the way it shows us how these characters have changed -- and how they haven't. Dante is more thoughtful and more grounded than before, but still just a little uptight when it comes to certain aspects of sex. (He expresses schoolgirlish dismay at one of Randal's flights of sexual fancy: "You never go ass to mouth!") The scenes between him and Dawson are lovely: Their rapport is so casual and comfortable that you can see not just how they'd fall in love, but how each has helped the other make the most of a decidedly unprestigious fast-food gig: Their banter captures the way, when you're stuck in a job you hate, sometimes the only thing that makes work remotely appealing is the prospect of goofing around with your colleagues.

"Clerks II" also captures the way the old-timers must scoot over on the couch to make room for the young. Two of Smith's most enduring characters from the first picture, Jay and Silent Bob (Jason Mewes and Smith, respectively), return, once again spending all their days pretty much leaning against the wall, and also, of course, selling drugs. But even they've grown up a little bit. They've just done time in detox -- they were forced into it after being busted -- and Jay claims he's found the Lord, an idea he's unabashedly tickled with. ("Did you know Jesus was a Jew?" he asks, as if he were a kid who'd just discovered a new fact about Santa Claus.) And the kids who show up to score off them are much younger, the age Jay and Silent Bob were in the first picture, another reminder of the way youth always nudges its way in to make us feel old.

Trevor Fehrman is wonderful as Elias, the very young, very Christian Mooby's employee whom Randal teases mercilessly. (At one point Randal accuses Elias, who's obsessed with Transformers and the "Lord of the Rings" movies, of being "a nerd of Potsie-like proportions" -- another instance of old-timers clinging to their own precious cultural references.) Elias' mom and dad drive him to work -- the whole family whistles in unison as they wheel into the parking lot -- and, needless to say, he's never had sex. (His girlfriend has told him her parents have installed a special troll, in a very private place, to guard her virginity, and he believes her.) Fehrman has a loopy, fey quality: He reminds me of the way Brittany Murphy used to be, in movies like Matthew Bright's outlandish "Freeway" -- he's got that same zonked-out naiveté, and he's great fun to watch.

"Clerks II" has its problems: It rambles into sentimentality, and it doesn't need to -- the movie is more affecting when the characters are just cracking jokes. But Smith, an inherent optimist, has made a movie full of crude humor that also manages to explore the enduring qualities of friendship. And "Clerks II" gets at something even more elusive: In this country, we assume that every kid has to go to college, which will help him or her get a great job and build a happy, satisfying, productive life. A life lived any other way is probably destined to be inferior. That's not just a fallacy; it's also a way of setting people up for huge disappointments. At one point even Randal, who generally doesn't seem to be bothered much by his directionless life, says that the time he's spent lounging around, working at not-very-demanding jobs, hasn't been meaningless: "It's all building toward something," he asserts, a truth "Clerks II" stands by. Smith seems to be suggesting that there are many ways to build a life, even when you're not making much of a living.