Instead of learning from their bloody mistakes, the neocons see Lebanon as a chance to repeat them. 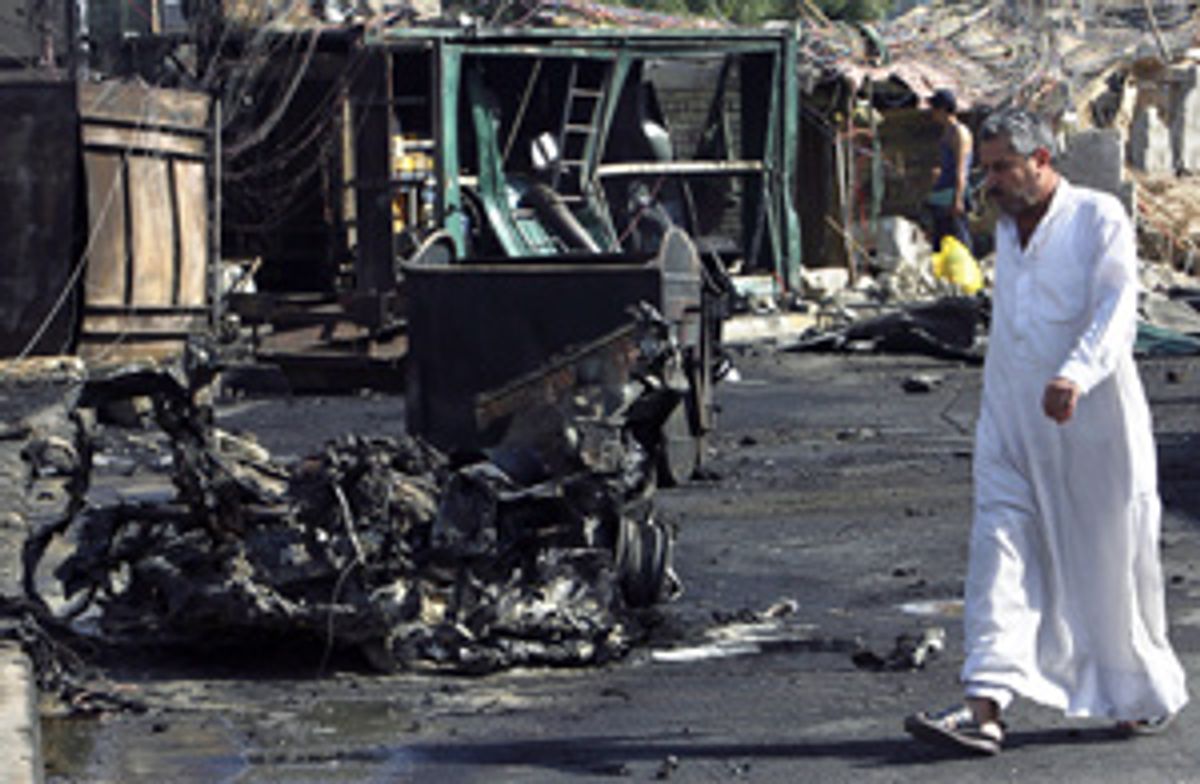 Whatever the neoconservatives may lack in prudence they more than compensate for with persistence. Their policies are failing spectacularly in Iraq, where civil war and insurgency threaten to destroy the unstable unity government. Their policies are failing more quietly in Afghanistan, where resurgent Taliban rebels imperil the fledgling democracy. But rather than reckon with the damage and reconsider their actions, they have seized on the confrontation between Israel and Lebanon to renew their old ambitions.

William Kristol, the Weekly Standard editor who bears as much guilt for the Iraq debacle as anyone outside government, suggests military strikes against Iran and perhaps Syria. Newt Gingrich, the old chicken hawk, is eagerly anticipating World War III. Michael Ledeen demands "hot pursuit" across the borders of Iraq into Syria and Iran as the prelude to World War IV.

To appreciate the bloodthirsty irresponsibility, not to say insanity, of all this bellicose jabber, it is necessary to survey our position from the perspective of Baghdad and Kabul. The deteriorating situation has been driven from the front pages by the sudden conflagration sparked by Hezbollah, but things further east are getting worse, not better.

In June, the U.S. and Iraqi governments announced a new security initiative that would crack down on the insurgency in the capital region with additional checkpoints, curfews and raids on militant strongholds. Sending 50,000 Iraqi police and soldiers into the streets, Prime Minister Nuri al-Maliki promised to achieve progress against the sectarian bloodletting that is driving his country deeper into civil war. But the results have been less than inspiring so far.

Indeed, the violence has grown still worse, as Maj. Gen. William Caldwell, a spokesman for the coalition forces, conceded yesterday -- and in fact the number of daily attacks in and around Baghdad has grown by 40 percent. According to Caldwell, the past week has seen an average of 34 attacks every day against U.S. and Iraqi forces. The previous month saw an average of 24 attacks each day. The United Nations estimates that as many as 6,000 civilians were killed in May and June. More than 30,000 have been displaced by "ethnic cleansing" operations during the past month, according to the Iraqi government's migration ministry.

"We have not witnessed the reduction in violence one would have hoped for in a perfect world," said Caldwell, an officer with an obvious talent for understatement. Less tactful political figures in Baghdad have denounced the "crackdown" as a dismal fiasco.

Fearful of the increasing carnage, the Shia religious leader Ali al-Sistani has publicly urged an end to sectarian violence. But his plea, which is not the first he has issued, seems unlikely to have any significant effect. Dozens of innocents on both sides of the religious divide continue to be slaughtered indiscriminately by masked killers and suicide bombers, completely undeterred. The security apparatus that is supposed to take over from the coalition forces appears unable to respond, let alone to protect the Iraqi people. The U.S. military's triumphant elimination of al-Qaida leader Abu Musab al-Zarqawi, which was hailed as a turning point in the counter-insurgency campaign, seems to have had no impact at all.

In Afghanistan, as the fifth anniversary of the overthrow of the Taliban approaches, the fanatical allies of al-Qaida are back with a vengeance. Operating with impunity in much of the southern countryside and along the border of Pakistan, the fanatical Islamists overrun towns and defy the supposed sovereignty of the government led by President Karzai. The United States largely abandoned Afghanistan in order to invade Iraq, without ever finishing the task of cleaning out the Taliban and rebuilding the ruined nation. Only the presence of NATO forces has allowed the Karzai government to survive. Our European allies have provided those troops despite their disagreement with Bush administration policy and their concern over the belligerence of the neoconservatives.

The American public evidently doesn't share the far right's enthusiasm for endless war. While extremists like Gingrich and Kristol complain that the White House has turned soft and excessively diplomatic, Republican lawmakers seeking reelection this fall seem at long last to be coping with the grim truths of the war they made. Suddenly, members of Congress who had doggedly defended the administration and denounced critics as unpatriotic are apologizing for the "mistakes" that have cost so many American and Iraqi lives. They are afraid that they will be held accountable in November for the consequences, and it is surely to be hoped that they will be. Perhaps they will even stop listening to the radical loonies who got them into this mess.