The mega-chain is undergoing an extreme enviro makeover. Even Al Gore is on board. But will Wal-Mart keep its promises? 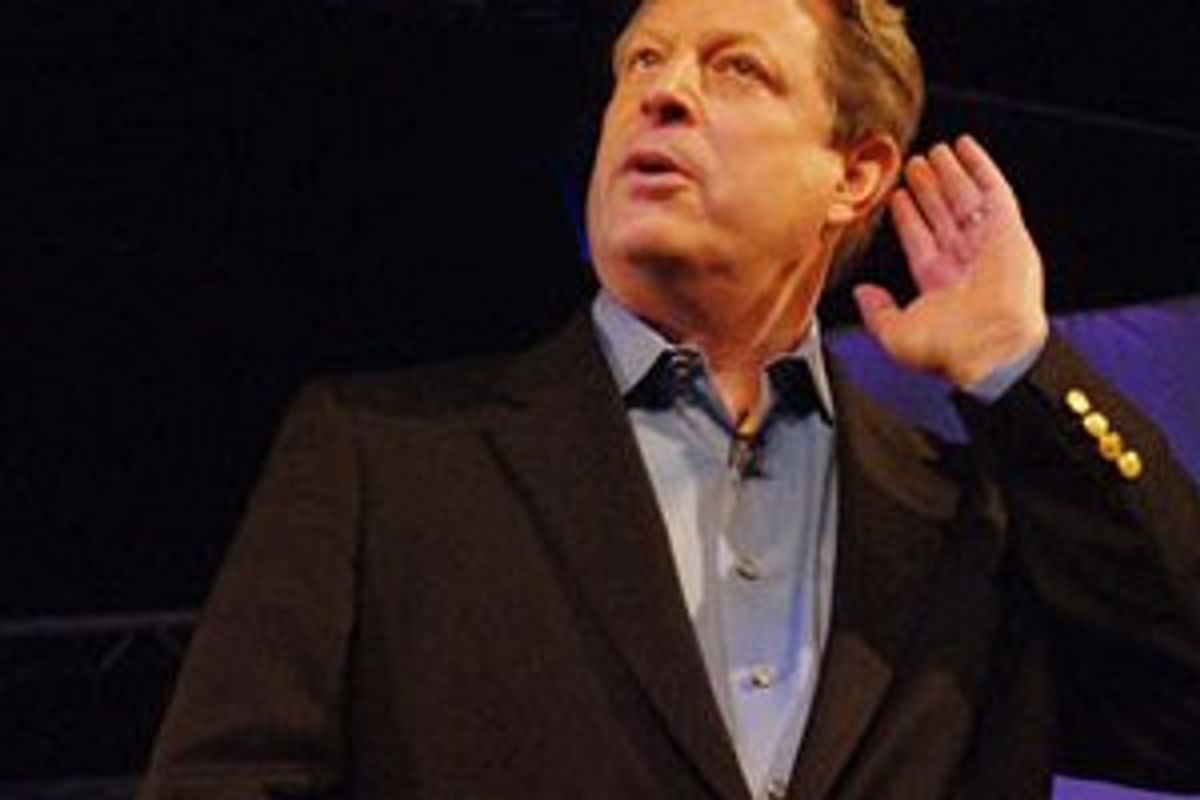 Picture Al Gore standing in a modest auditorium deep in America's heartland before an exultant crowd of Wal-Mart employees, comparing their campaign to lighten the company's environmental footprint to the Allies' righteous struggle in World War II. This after Rev. Jim Ball, head of the Evangelical Environmental Network, likened the giant retailer's greening efforts to the work of Jesus Christ.

This strange scene unfolded last week in Bentonville, Ark. The occasion was an environmental strategy meeting of some 800 Wal-Mart execs, managers, suppliers and partners, where the heads of the corporation's various divisions -- from seafood and textiles to transportation and packaging -- outlined their respective green agendas.

The assembled employees did high-energy renditions of the Wal-Mart cheer, complete with fist-raising, grunting, and even a group wiggle. "Gimme a W! Gimme an A! Gimme an L! ... Whose Wal-Mart is it? Who's No. 1?" CEO H. Lee Scott pumped his team up further by calling Wal-Mart's newfound environmental focus a "higher purpose." There was also a rare appearance from company chair Rob Walton Jr. -- son of Wal-Mart's legendary founder and, as it happens, a member of Conservation International's board -- who beamed, "I love, love hearing the progress that is being made."

Mid-afternoon brought a screening of "An Inconvenient Truth"; more than a few audience members could be seen dabbing teary eyes as the documentary drew to a close. Then the entire crowd erupted into a standing ovation when the lights came back on and Gore trotted up to the stage, Tipper in tow.

"That's a larger round of applause than we gave for Wayne Newton!" joked Scott while introducing Gore, who, in turn, showered the audience with reciprocal cheer: "Doesn't it feel good to have this kind of [environmental] commitment? Don't you feel proud?"

Sporting a curiously thick Southern drawl, Gore heaped praise on Wal-Mart's green goal-setting. His Allies analogy was particularly striking: "Look at what [the Allies] did with their victory. They found after winning that they had gained the moral authority and vision to lift up from their knees our defeated adversaries ... And by taking this climate crisis on frontally and making this commitment, you will gain the moral authority and vision as an organization to take on many great challenges."

Keenly aware of his Arkansas audience's Christian inclinations, Gore peppered his hourlong commentary with religious references. He quoted Scripture, told a Bible story, and then offered a nonapologetic apology for the sermonizing: "I don't mean to proselytize here on my religious faith ... If you're an atheist or agnostic" -- dramatic pause -- "God bless you!"

Gore also waded into politics. He called the partisan bickering in Washington "pitiful, seriously pitiful," and mocked national leaders for "borrowing a ton of money from China to buy a ton of oil from Saudi Arabia to burn it in ways that destroy the inhabitability of the planet -- not a good pattern!" He also called for a radical overhaul of the American tax system: "We should sharply reduce payroll taxes and make it all up in CO2 taxes so the low- and middle-income people don't bear the cost burden of this big transition in energy sources."

His whole spiel sounded like a dry run for red-state campaigning in 2008. So it only made sense when, in bidding Gore adieu, Scott asked the big question: "Are you going to run for president?" Wild applause ensued, but Gore's response was predictably understated: "There's a lot about the political system that I think is really toxic ... [and] that I don't think I'm good at," he said. "I really believe that the highest and best use of my experience and skills may be to concentrate all-out on changing the minds of the American people about the [climate] crisis. That way, whoever does run for president faces an electorate that flat-out demands that they make this their priority."

The pairing up of Gore, this season's It Boy in Hollywood and other left-leaning circles, and Wal-Mart, the goliath retailer loved in red states and loathed in blue cities, seems bizarre on its face -- and couldn't have happened before this year. But now, with Gore trying to spread climate awareness beyond the choir and Scott trying to give Wal-Mart a high-profile green makeover, the match actually makes sense.

Last October, Scott pledged to transform his sprawling company, which employs 1.8 million people worldwide and ranks No. 2 on the Fortune 500 list, into a lean green machine powered exclusively by renewable energy, producing zero waste, and selling sustainable products. Those goals are so lofty they sound downright deluded, but Scott has followed them up with specific, seemingly achievable commitments and timetables. He aims, for example, to reduce greenhouse-gas emissions at Wal-Mart's existing stores and distribution centers 20 percent by 2012, and invest $500 million in environmental improvements each year.

Andy Ruben, Wal-Mart's vice president for corporate strategy and sustainability, reasons that the 100 percent renewable-energy goal could be met largely with greater efficiencies. "We can use 70 percent less energy to do what we're doing today, and supply the rest with renewables," Ruben suggested at last week's meeting.

The gathering brought forth more green goals from divisions throughout the company. In the area of seafood, Wal-Mart is working with the World Wildlife Fund to identify, and purchase exclusively from, sustainable fisheries. It's moving toward organic cottons in its apparel and bedding lines. The jewelry division is developing a sustainable certification program for the gold mines it works with, and exploring outlets for recycled gold. The transportation division is planning to double the efficiency of its truck fleet, one of the largest in the U.S., within a decade. The construction division is developing prototype stores that are 30 percent more energy-efficient than current stores, and the company also aims to improve efficiency at existing stores by 20 percent. The packaging department is working to eliminate its waste stream by 2015, using reusable, recycled and biodegradable containers.

The produce division is ramping up its organic offerings, and plans to move toward more local farm purchases in order to save money on truck fuel costs and refrigeration. Ron McCormick, an executive in Wal-Mart's produce division, said he plans to purchase a broader variety of produce based on what's available in each region, rather than insisting on a "monoculture" of produce at stores nationwide. "Our whole focus is: How can we reduce food-miles?"

These internal aims aside, Scott said Wal-Mart's most meaningful environmental impact will be in nudging its 60,000 suppliers toward more eco-friendly practices -- working with them, for instance, to reduce packaging, which in turn would mean fewer raw materials consumed, less energy expended in transit, and, in the end, lower prices for consumers. "Ninety percent of the impact Wal-Mart can have is on the supply chain," he said.

Scott's grand goal, as he explained it in an interview this spring, is to "democratize sustainability." To wit: He wants to use Wal-Mart's unparalleled economies of scale to put everything from organic T-shirts to compact fluorescent light bulbs to pesticide-free foods within reach of the masses.

Of course, he believes this green push will make the company money. "The benefits of the strategy are undeniable, whether you look through the lens of greenhouse-gas reduction or the lens of cost savings. What has become so obvious is that [a green strategy] provides better value for our customers."

Another unspoken effect is likely a boost to employee morale. In recent years, the company seemed beset from all sides by impassioned detractors and bad publicity -- the 2005 documentary "Wal-Mart: The High Cost of Low Prices," sexual-harassment lawsuits filed in 2004 and 2005, ubiquitous union campaigns protesting poor worker treatment, and fights against proposed stores in communities from California to Maine.

Now, Wal-Mart bigwigs -- and maybe even lowly "associates" -- finally have something they can feel good about: being part of the biggest corporate greening in history. If the energy in the room at last week's meeting was any indication, Wal-Mart managers these days are feeling right fine about their jobs.

Many of Wal-Mart's multitudinous critics aren't mollified, of course. The company's environmental goals are not being accompanied by notable progress in other areas like labor standards and gender equity. And so far the green talk is largely just that -- talk.

But some environmentalists are hopeful. "If they do even half what they say they want to do, it will make a huge difference for the planet," said Ashok Gupta of the Natural Resources Defense Council, who attended the meeting. "It definitely seems that Wal-Mart is really serious."

Former Sierra Club president Adam Werbach, who's reportedly signed on to work as a consultant for Wal-Mart, has also lent his cred to the retailer's green goals. Environmental Defense is so optimistic that it's opening an office in Bentonville, with an employee wholly dedicated to coordinating with Wal-Mart. (Can it be a coincidence that Sam Walton Jr., son of board chair Rob Walton, sits on the board of Environmental Defense?)

Maybe these enviros can push the company even further -- to site its stores in downtown, mixed-use neighborhoods, set green requirements for all its suppliers, add green roofs and other eco-friendly features to all its facilities, not just pilot projects, and educate its 176 million weekly customers about the virtues of sustainable living.

In the meantime, though, Gore's got some advice for Wal-Mart's leaders: "Following through [on your environmental goals] is the single most important thing that can be done in this country to transform the relationship between NGOs and business," he said, explaining that critics will otherwise be able to say, "'See there, I told you they weren't serious.'"

Gore was quick to add that he, for one, is not a cynic: "Have you ever known Wal-Mart not to follow through on a big commitment of this kind? I have not myself. I believe it's the kind of journey that once you start, you continue."