The elephant in the room

The protesters at the DLC's convention derided them as Republicans. But the real pachyderm in the Denver Hyatt was Iraq -- a subject Hillary Clinton and other moderate Democrats don't want to talk about. 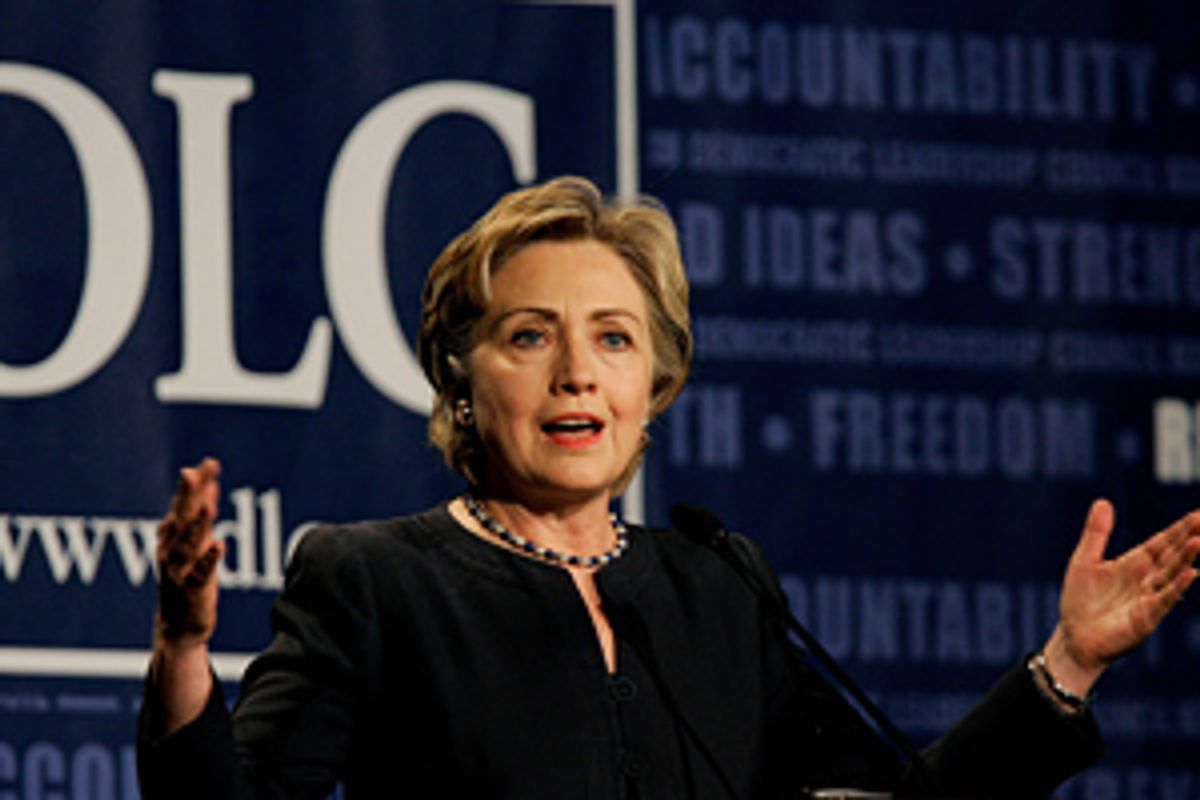 Inside a packed ballroom at the high-rise Hyatt Regency hotel on Monday, Sen. Hillary Clinton told nearly 400 elected officials attending the Democratic Leadership Council's annual conference of a plan she claims will help her party regain control of Congress and the White House. The "American Dream Initiative" focuses Clinton and the party's other avowed centrists on the bread-and-butter, middle-class issues that carried her husband to the presidency more than a dozen years ago.

"This is an agenda," said Clinton, "that can help Democrats as they campaign around the country." The plan, which she developed in concert with the DLC, addresses middle-class jitters by calling for improved healthcare, protection of retirement benefits, more college loans and a return to balanced budgets. The senator sold the initiative with a 20-page pamphlet and a slogan that was an intentional echo of James Carville's 1992 catchphrase about the economy -- "It's the American Dream, stupid."

But those were different times, before a second president named Bush had invaded Iraq and before the Internet gave birth to a new Democratic insurgency that questions the power and the very purpose of the erstwhile insurgents in the DLC. Bill Clinton and the DLC shared success in the 1990s by challenging party power brokers, co-opting Republican issues, and moving the Democrats to the center, and his wife has continued to employ that formula as a senator and presidential hopeful. Mere hours before Bill Clinton would speak on behalf of DLC stalwart Joe Lieberman in Connecticut, his wife took the dais in Denver and immediately reminded the crowd that she'd addressed the convention the year before as well. "I'm back," she said. "And I'm glad to be back."

But the former president was in Connecticut because Joe Lieberman needs his help, and Lieberman needs his help in large part because of his unalloyed support for the current president's Iraq adventure. Up to 60 percent of the American public now says the war wasn't worth fighting. In fact, in nearly every poll, regardless of where they stand on it, voters choose Iraq as the most important issue facing the country. Yet in her speech Sen. Clinton chose to focus on the issue that always comes in a close second, the economy, and dispatched Iraq by twitting the Bush administration for "the disastrous policies they have followed abroad."

Throughout the three-day event, both in speeches and in casual hallway conversations, the DLC as a whole mostly steered clear of Iraq. Though Iowa governor and presidential hopeful Tom Vilsack paid lengthy tribute to the courage of a wounded veteran he'd met, and Indiana's Evan Bayh called Iraq "a tragic mess," nobody issued a 20-page pamphlet about when and how U.S. troops should come home. DLC president (and former Bill Clinton advisor) Bruce Reed has, after all, said, "I don't think it's a good issue for anybody." It is also a war that every Democratic member of Congress who's been mentioned as White House material except Russ Feingold, including Hillary Clinton, voted to authorize.

The incendiary topic of Iraq was left to the people outside the glass-walled Hyatt, a knot of demonstrators never larger than two dozen who marched up and down the sidewalk in the 90-degree heat. They protested the war and the DLC itself, echoing Howard Dean's jab about the group being "the Republican wing of the Democratic Party." "DLC, where you been? You're acting like Republicans," they chanted, straining for a rhyme.

A young woman in matching pink socks, sneakers and hair had come expressly to protest Sen. Clinton's voting record on the Iraq war. "I won't vote for her," the woman insisted, "unless she starts changing her position." She was handing out a flier that listed all of Hillary's Iraq-related sins.

Except for the hotel's security guards, who paced the perimeter and whispered into black walkie-talkies, the protesters drew little attention. Ed Kilgore, the DLC's vice president for policy, said he was only "dimly aware" of the protesters, though he probably saw them as much as anyone at the conference, since the hotel's no smoking policy forced him to duck outside into the heat for cigarettes. "Anyone who can't tell the difference between us and the Republicans needs to pay closer attention," he said mildly. He noted that the conference did, in fact, have a panel that touched on Iraq.

With his long, unstylish hair and heavily scratched eyeglasses, Kilgore looks like a protester himself, and he claimed some common ground with the folks outside the hotel and with the blogosphere. The DLC, explained Kilgore, "has always seen itself as outsiders. We're a very diverse group, too, ethnically and ideologically."

But he also stressed that the DLC and its blogospheric critics are in different lines of work. "What bloggers and activists do is important. They find ways to raise money in small batches. This is a good thing. Finding new ways, new technologies to activate voters, that's also a good thing. But most bloggers will tell you they're not in the policy business. Policy business and creating networks of leaders is what we have always been about."

Policy business meant that much of the three-day meeting was devoted to wonkish discussions about domestic issues like public schools, pensions, poverty and energy. Creating leaders means finding ways to win, which for the DLC has always entailed capturing the middle, with a strong emphasis on technique.

In Colorado two years ago, a well-executed campaign allowed the Democrats to capture both houses of the state Legislature for the first time in 44 years and add a seat each in the U.S. House and Senate. The DLC had chosen Denver as the host for its annual "conversation" because it sees Colorado as a state where Democrats are making a comeback, and it devoted a breakout session called "What Happened in Colorado" to learning the lessons of 2004.

Taking a page from the Republican playbook, the Democrats had poured millions of dollars into targeted races. Rutt Bridges, one of four wealthy donors who quietly bankrolled much of the so-called stealth campaign, attended the session. "We felt the same way Dwight Eisenhower felt," said Bridges. "Unilateral disarmament is not the solution." One of the lessons of 2004, however, might be that it was a singular event. As Al Yates, former president of Colorado State University, pointed out to the assembled, one of the key ingredients won't be available this fall: surprise.

A round-table discussion titled "Values-Based Messaging" felt especially toothless. Ted Nordhaus, a co-director of the Breakthrough Institute and co-founder of American Environics, spoke about "marginal middle-agers" and alienated voters who are threatened by the complexity of the modern world. The conservative, authoritarian person, he said, meaning the Bush voter, has an "aversion to complexity and a desire for cognitive closure." Before those folks can become Democrats, he counseled, "we need to help them manage complexity and get the closure they need." Asked how Democrats should give them those things, Nordhaus suggested they make like Republicans and "draw fault lines that define who they are." Democrats, said Nordhaus, "don't have a clear story about who they are. Instead we get laundry lists of policies." When the hour was over, Nordhaus hadn't said what those fault lines or that story should be, and no one had asked.

Depending on your point of view, the American Dream Initiative that Hillary Clinton presented Monday, with its talk of block grants and tax credits, is either a clear story or a laundry list of policies. It is certainly part of the blueprint for a presidential campaign.

While Russ Feingold and Wes Clark do far better in presidential straw polls among the politically engaged progressives on such blogs as Daily Kos, Hillary Clinton is far and away the preferred candidate of those more numerous Democratic voters who don't spend their days hitting the refresh button. She also outpolls all of the other presidential wannabes who got face time in Denver, Vilsack, Bayh and New Mexico Gov. Bill Richardson. The blog-savvy Mark Warner of Virginia may have done himself more good by not coming to Colorado.

After her speech, Hillary was swamped by adoring officials from all over the country who lined up to have their pictures taken with her. Though she looked tired, she was chic in slimming black with a choker around her neck, and her bright white smile lopped two decades off her 58 years. They were the only real teeth anybody in Denver showed on Monday.

Eileen Welsome is a Pulitzer Prize-winning reporter and author who lives in Denver. Her second book, The General and the Jaguar, was published in June.