Why Israelis believe they're right

Much of the world sees the Israeli attacks on Lebanon as disproportionate. But for the vast majority of Israelis, including some former doves, the war against Hezbollah is deterrence in self-defense. 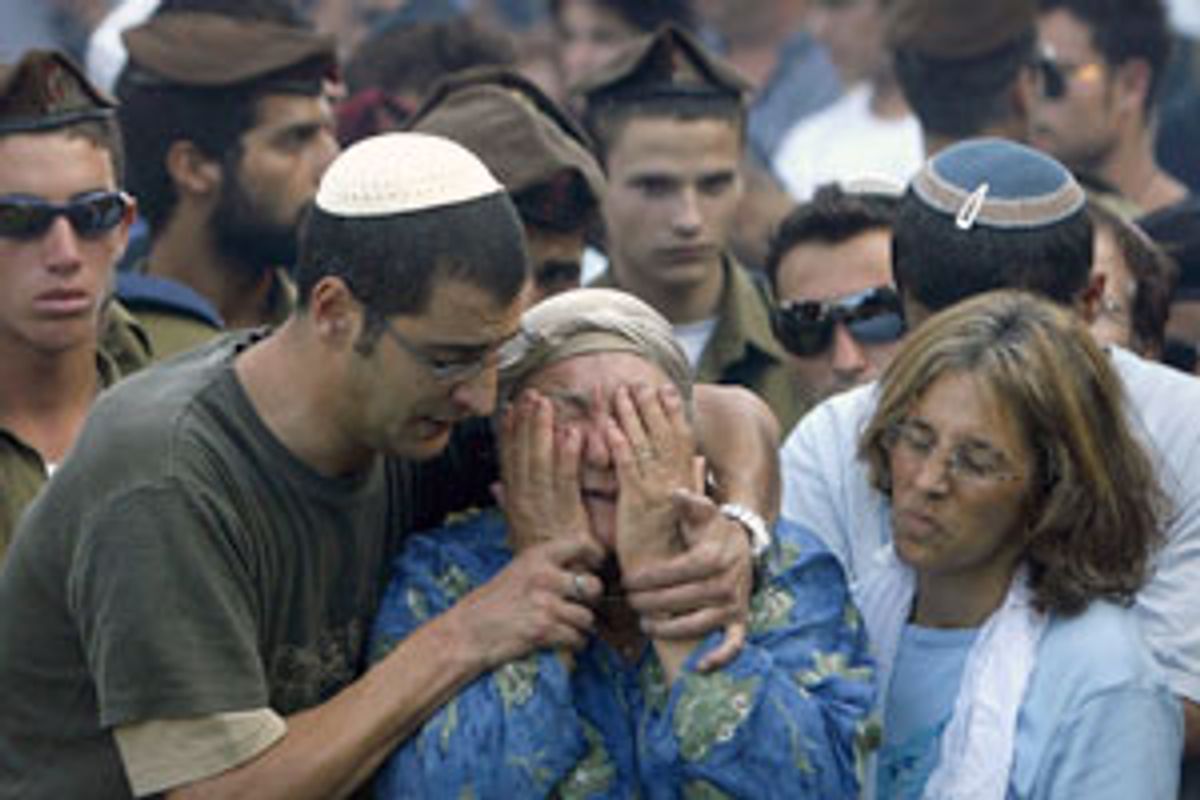 In the current issue of its Tel Aviv edition, the magazine TimeOut offers the latest variation on Saul Steinberg's famous cartoon of a New Yorker's view of the world. The foreground on the Israeli illustration shows the cafes of the Shenkin district, Tel Aviv's equivalent to SoHo, and the tree-lined expanse of Rothschild Boulevard. Just past the Yarkon River, the city's northern boundary, these delights give way to a landscape marked by Patriot missile batteries, exploding bombs and incoming rockets, some launched from Tehran, Iran.

As so often in Israel, gallows humor explains something essential about the national temperament. In the case of TimeOut's cover, the relevant temperament is Israel's unity in supporting the war against Hezbollah, Iran's proxy in south Lebanon. Anyone who finds it surprising that 95 percent of Israelis endorse the aerial bombardment of Lebanon with its hundreds of civilian casualties, as a recent poll by the newspaper Maariv found, should consider the implicit punch line of TimeOut's visual joke. The battlefront in this war comprises a good deal of sovereign Israel. What might look to much of the outside world like "disproportionate" military action seems to the vast majority of Israelis like deterrence in the cause of self-defense.

All the violence that Israelis have endured since the collapse of the peace process in September 2000 has given them quite an acute understanding of how seriously to take any given attack. One of the mordant jokes created during the al-Aksa intifada was a drawing of a "ruler of attention and shock" with calibrations showing the psychic impact of various Palestinian acts. Throwing a rock at a settler's car rated a mere 1.5 on a scale of 10. A suicide bomber blowing up a bus scored 8.5. The idea of a rocket hitting Haifa, much less 800 of them falling all over northern Israel, did not even occur to the satirist.

Now that precisely such an onslaught has occurred, many Israelis have begun likening the war with Hezbollah, which is really a war with Iran, to the nation's 1948 war of independence. It is being fought not in the occupied territories, as were the Yom Kippur War in 1973 and both intifadas; it is not being fought outside the country, as were the Six Day War in 1967 and the Lebanon war in 1982. The kidnapping of two Israeli soldiers on Israeli land was merely a prelude to the larger agenda. Haifa, Safed, Nahariya, Tiberias, Nazareth, Rosh Pina, Kiryat Shmona -- Hezbollah's targets are all inside the internationally recognized boundaries of Israel.

It doesn't take a right-winger to view the stakes as existential. "This is a different kind of war, and an old kind of war," rabbi and author Daniel Gordis, a peace activist during the Oslo period, wrote last week. "Rage has given way to sadness. Disbelief has given way to recognition. Because we've been here before. Because we'd once believed we wouldn't be back here again. And because we know why this war is happening."

Orna Shimoni, whose son was killed during Israel's occupation of south Lebanon after the 1982 invasion, was one of the founders of the "Four Mothers" campaign that called for withdrawal. Even she, in a commentary for the Israeli Web site Ynet News, endorsed the current attacks. "It is clear that we were attacked inside our own sovereign territory, with no provocation at all," she wrote. "There is no question that we must now strengthen both the IDF [Israel Defense Forces] and our political echelon to allow them to obtain two main objectives: Bringing our kidnapped soldiers home and disarming Hezbollah, and pushing that organization away from the Israel-Lebanon border."

Why would longtime Israeli doves such as Gordis and Shimoni adopt such seemingly hawkish positions? One way of answering the question is to say that the old templates for analyzing the Israeli-Arab conflict no longer apply. In the traditional view, the warring parties were locked into a "cycle of violence" caused by the competition of two national movements for the same finite piece of land. Compromising on the territory, releasing the West Bank and Gaza from Israeli occupation, would finally terminate the cycle.

Compromise might have worked had the conflict indeed remained one that, like the Cold War, pitted two rational, secular adversaries against each other. But in Hezbollah, as well as in Hamas, Israel now faces an opponent that holds to the absolutism of religious doctrine, specifically the messianic martyrdom of jihadist Islam. The assaults by Hamas from Gaza and Hezbollah from Lebanon both came after Israeli withdrawals to borders accepted by the United Nations. For six years in south Lebanon and one year in Gaza, there has been no occupation, and Ehud Olmert built a centrist governing coalition in Israel on the promise of pulling out from most of the West Bank.

Maybe the people so ready to assail Israel now should have been watching more closely a few months ago when President Mahmoud Ahmadinejad of Iran convened a conference devoted to the exterminatory premise of a "world without Zionism." Maybe they should have been listening more closely when Ahmadinejad declared his desire to "wipe Israel off the map." Instead the conference was pooh-poohed as the same old demagogy, a populist giving the red meat to his base, and the translation of the speech was dissected by Iran apologists as if the only relevant question was whether the president's Farsi phraseology meant altering the map with a gum eraser or white-out.

Plainly, Ahmadinejad took himself seriously, as seriously as one presumes Hezbollah leader Hassan Nasrallah took his own reference to attacking "occupied Palestine." By which he meant not the West Bank and Golan Heights but, well, Haifa, Jerusalem and Tel Aviv.

The reality of such a threat, backed up by 12,000 missiles and rockets, makes for a certain sort of consensus in Israeli society. Yes, dissident notes have been struck by the politician Yossi Sarid and the historian Tom Segev, and, yes, about 2,000 Jewish and Arab Israelis took part in a peace march on Saturday in Tel Aviv. Supporters of Israel's overall strategy have been vigorously debating the effectiveness of its aerial bombing tactics. No thinking person would welcome the destruction and carnage in Lebanon.

But decisions to go to war do not get made blithely in Israel. It has no death cult. It has an army of conscripts, not volunteers. When even one soldier dies, those six degrees of separation touch a vast share of a small nation's population. And somebody comes up with yet another astringent joke to ward off the dread. One of the latest, recounted by Gordis in his recent essay, was a skit on a television newscast. It had one Israeli telling another, "Mi-po ani lo zaz," this is the only place where Jews can be safe. When the camera pulled back from the men, it showed they were standing in London.