"A Disorder Peculiar to the Country"

Ken Kalfus' ingenious new book about an explosive divorce might be the best novel yet about 9/11. 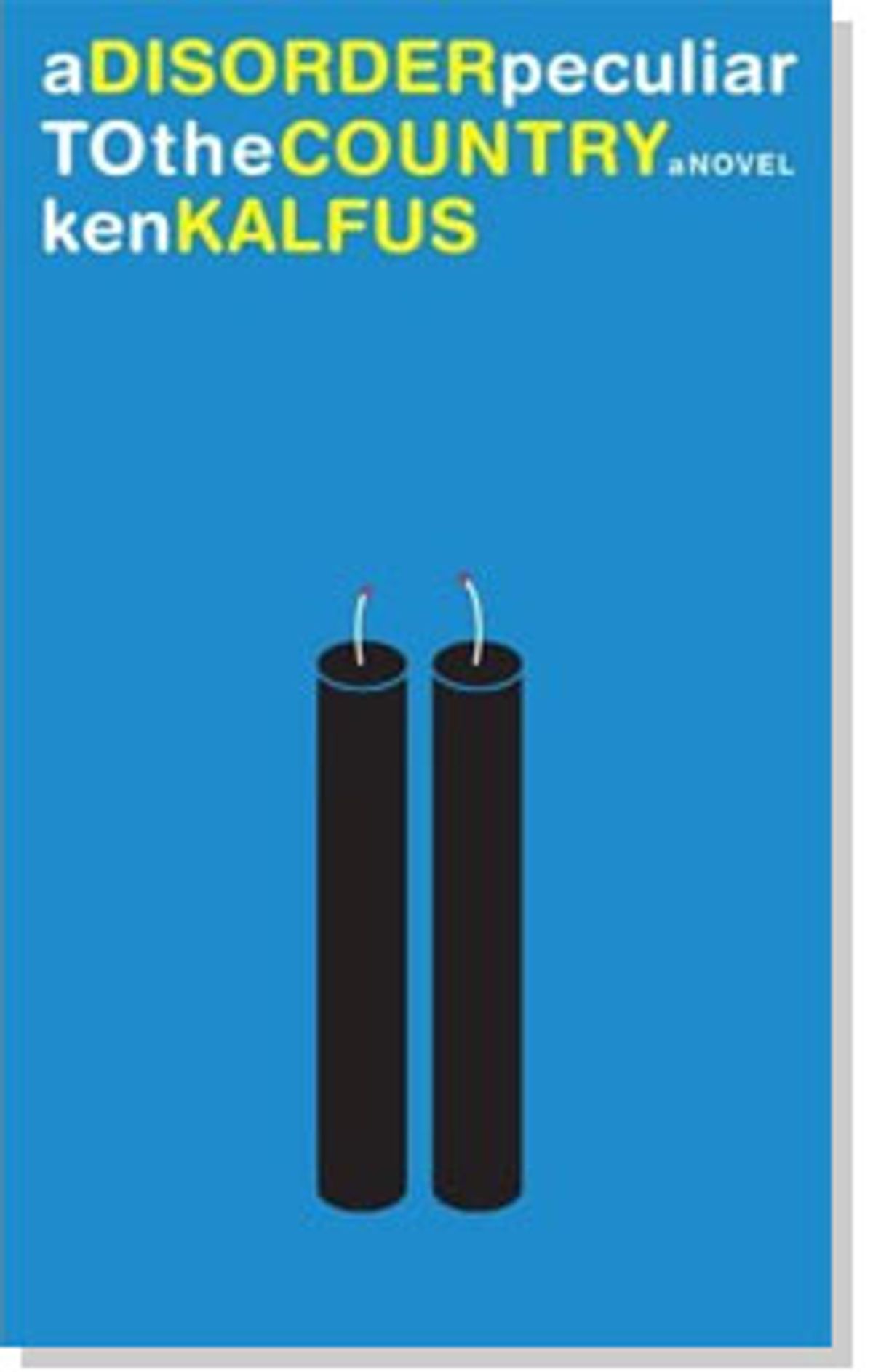 Maybe you think that comparing the bitter divorce of a New York City couple to what's currently known as the war on terror is a bit overblown? I thought that myself about one passage in Ken Kalfus' brilliant new comedy of manners, "A Disorder Peculiar to the Country," in which an estranged husband walks up to his wife in their contested Brooklyn Heights two-bedroom and tries (but fails) to set off a suicide bomb. Or at least that's what I thought until recently, when news came of an explosion that destroyed a Manhattan townhouse. When the building detonated, the first thing bystanders must have thought was: terrorists! Instead, the culprit was a man so infuriated about losing his beloved home in his divorce that he decided to blow it up, and himself along with it.

Most likely, critics will say that "A Disorder Peculiar to the Country" is a novel that compares divorce, American-style, to geopolitics, 21st century-style, and that it shows how Sept. 11 has infected the very fabric of our personal lives. Almost, but not quite and not so conventional or narcissistic. Kalfus, an endlessly ingenious writer, is not trying to say something about divorce by likening it to the so-called clash of civilizations. Instead, he's showing us that the far-off national conflicts we find so baffling and complicated actually work a lot like a really bad divorce. Switching the polarity of the metaphor makes sense because, let's face it, most of us know a lot more about divorce than we do about the Middle East.

Joyce and Marshall, the couple in question, have found themselves stumbling from the fairly amiable realization that their marriage has lost its savor to a hatred that has "acquired the intensity of something historic, tribal and ethnic, and when they watched news on TV, reports from the Balkans or the West Bank, they would think, yes, yes, yes, that's how I feel about you." It's gotten so bad that when each one mistakenly thinks the other has been killed in the Sept. 11 attacks -- he worked at the World Trade Center; she almost boarded Flight 93 -- they secretly rejoice.

How these two came to detest each other so much is a bit of a mystery to both. Joyce muses that if someone asked her why she and Marshall divorced, she'd find it hard to respond: "An answer would have required that she revive long-dead arguments and 'issues,' none of which seemed like just cause, or at least enough cause to justify their impoverishment and the intensely complicated arrangements they would now have to devise involving the kids." The resemblance between this situation and standoffs in certain hot sandy countries is acute. "If you isolate each of our betrayals and self-indulgences," Marshall tells his lawyer, "the mean things we've said to each other, the errors in judgment -- on their own, they're quite heinous. Yet neither of us did anything to the other that wasn't in the context of something else."

Among those betrayals are Joyce's telling an FBI agent on whom she has a crush that her husband might have sent an envelope of white powder to her office during the height of the anthrax scare. For his part, Marshall taps Joyce's phone, and uses the information he gets from that to sabotage her sister's wedding. Joyce seduces Marshall's best friend (married to her former best friend -- the couple took Marshall's side in the split). Marshall, who fancies himself a savvy day trader, hacks into Joyce's 401K account and redistributes her investments into a bunch of crappy stocks.

Not all of these schemes play out entirely according to plan. The best friend turns out to be pursuing his own line of revenge against his wife, and Marshall's worst-case investments start performing like gangbusters. Plus, there's blowback: Joyce gets the unwelcome intimation that "every human relationship is a conspiracy," and Marshall is shown just how poor a handle he has on the stock market's fluctuations. Meanwhile, their two children, Viola and Victor, draw pictures of the flaming World Trade Center and play a game involving holding hands and jumping off their grandmother's porch -- and their parents barely notice.

Some of the parallels Kalfus suggests are frank: "What had he done to her?" Marshall wonders. "What had he done to deserve this? Why did she hate him so?" Others are marvelously subtle and droll, as when 4-year-old Viola, trying to puzzle out what's going on between her parents, concludes that her 2-year-old brother is the problem: "The only solution -- and this, she thought, must be the subject of her parents' secrets, their frustrations, and their bad moods -- was to remove Victor from the household."

Besides the endless and illuminating permutations of its central metaphor, "A Disorder Peculiar to the Country" also features some of the best fiction writing yet about Sept. 11, worth celebrating for its utter lack of cant and self-regarding weepiness. Kalfus' description of Marshall's escape from the World Trade Center is harrowing without melodrama, but perhaps more daring is his willingness to tweak us for our less noble responses to the attacks. He writes about the surreptitious thrills ordinary people got out of their contact with heroic firefighters and federal investigations, and the way everyone seemed to want a piece of the big event, no matter how tenuous their connection, like the man who tells Joyce all about being stranded in Atlanta on Sept. 11:

"Joyce realized he considered himself a significant actor -- a victim -- in the September 11 tragedy. And didn't she think she was a victim too? After all, she had seen the buildings fall, with her own helplessly naked eyes. She was supposed to have been on one of the planes. But so what. Every American felt that he had been personally attacked by the terrorists, and that was the patriotic thing of course, but patriotic metaphors aside, wasn't the belief a bit delusional? There was a difference between being killed and not being killed. Was everyone walking around America thinking they had been intimately, self-importantly, involved in the destruction of the World Trade Center?"

It sure seemed like it. We didn't seem to learn much from the experience, either, but then how much can anyone grasp about what's really going on when they're at war? "A Disorder Peculiar to the Country" is about the way a conflict takes on a logic and momentum of its own until the reasons for continuing it ("If we leave, my comrades will have died in vain," and so on) become entirely self-perpetuating. That's what happened in Joyce and Marshall's divorce, and who among us hasn't been there -- or somewhere a lot like it -- at least once?