A year before the riots, this remarkable debut novel about growing up female and poor in Paris' Muslim housing projects was a sensation in France. 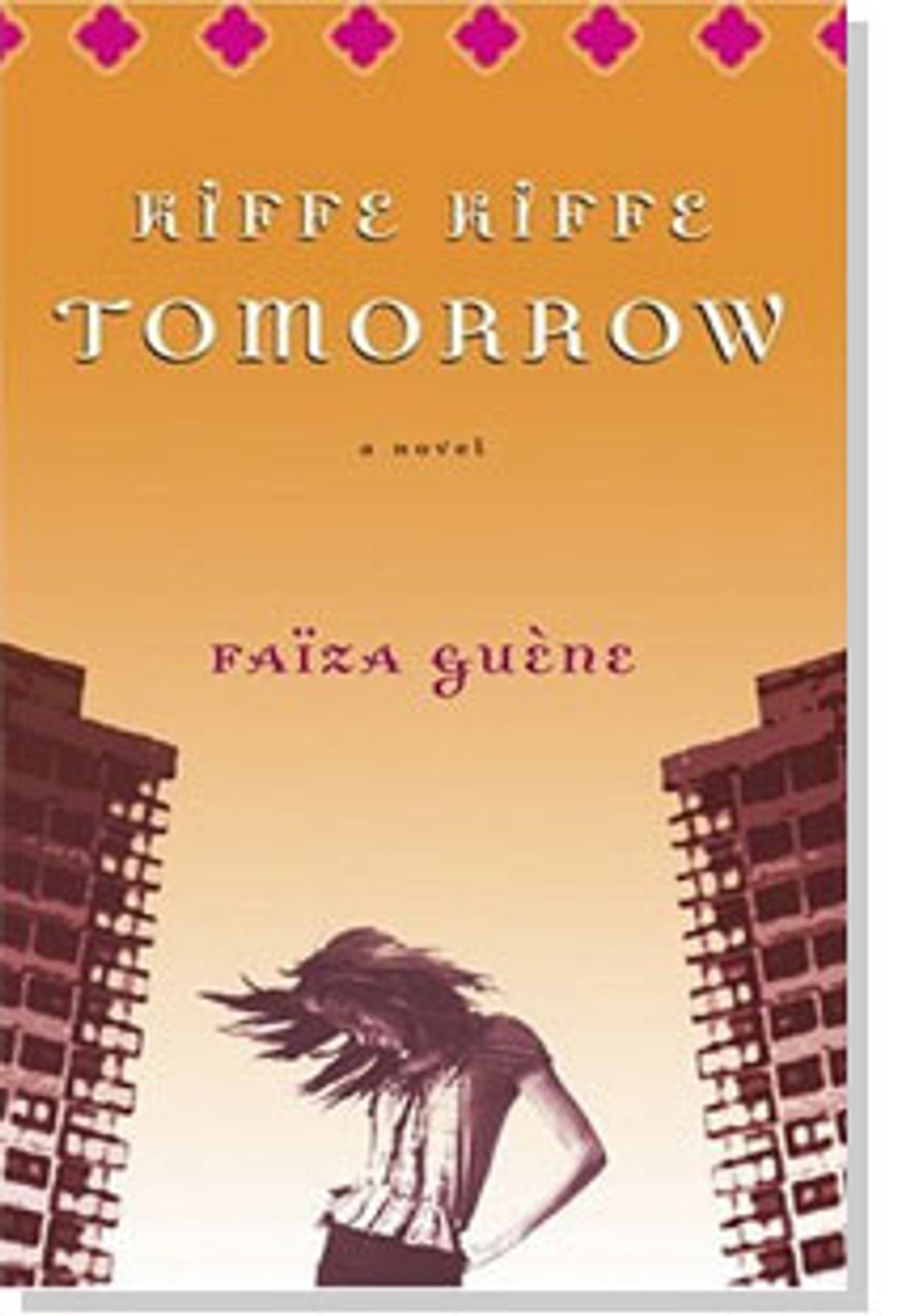 Doria's concerns about coming of age run a bit outside of the usual territory of teen angst. As the 15-year-old explains it, a few pages into Faïza Guène's debut novel, "Kiffe Kiffe Tomorrow," her problems began when she suffered the unfortunate fate of being born a girl. Since her mother wasn't able to have any other children, her dad abandoned the two of them for his native Morocco, in search of a suitably fertile new wife who could produce a son. Doria likes to torture herself, imagining how the birth will play out: the whole village celebrating, a band of sheiks pounding on drums, a sheep's throat being slit to give the baby his first name. "It'll be named Mohammed," she bets. "Ten to one."

Paradise is the suitably ironic name of the housing project in the fictional suburb of Paris where Doria lives. It's the kind of place we heard about in the news last fall during the weeks-long riots, but "Kiffe Kiffe Tomorrow" came out in France in 2004, a full year before. Like Doria, 20-year-old Guène is the daughter of Algerian immigrants and she grew up -- and still lives -- with both parents and two siblings in public housing in the volatile northeastern suburbs. By the age of 13, Guène was the editor of her junior high literary magazine and also involved in a publicly funded neighborhood cultural center where teens worked on scripts for short films for television. She showed the first 40 pages of what would become "Kiffe Kiffe Tomorrow" to the director of the center. He then sent them to his sister, an editor at the French publisher Hachette, who bought the book for a reported $1,800 advance.

"Kiffe Kiffe Tomorrow" immediately struck a chord in a country obsessed with sullen teenagers. From François Truffaut's Antoine Doinel films to Françoise Sagan's novel "Bonjour Tristesse," bourgeois tales of adolescence have always been popular in French pop culture. But Guène was held up as offering a glimpse of life beyond the Paris city limits and into a new, multicultural France. The story, a short stream-of-consciousness slice of suburban life, was heralded as, alternately, a Gallic version of "White Teeth," "The Catcher in the Rye" and "Bridget Jones's Diary." It was a success with the French establishment, earning glowing reviews in Le Journal du Dimanche and French Elle, and a smash with kids from the suburbs. (Guène was soon given a column in Respect, a French hip-hop magazine.) The book sold 200,000 copies in France and was translated into 26 languages.

This is a considerable accomplishment for a novel whose very title is a play on words easily lost in translation. "Kif-kif" is Arabic slang that means, more or less, "same old, same old." "Kiffer," however, is a verb especially popular with French teens meaning "to be crazy for," so you can kiffe George Clooney or kiffe Camembert. In French, then, "Kiffe Kiffe Tomorrow" is at once optimistic and pessimistic, but left as is in the American version, rather opaque. (The British edition is called "Just Like Tomorrow.")

Doria goes through life feeling pretty kif-kif about everything, believing the only way out of the ghetto is via rap or soccer -- both the domain of guys. Being female only makes life more difficult for everyone she knows. One neighbor receives anonymous notes accusing his precocious actress daughter of immoral behavior and being "led down the path of evil." Another girl who lives on the 10th floor of her building is rumored to be held prisoner by her father and brother, forbidden to leave the apartment at all. (Imprisoned girls are an obsession of Guène's. She also made a short film around the same theme called "The Prisoner.") Yasmina, Doria's mother, struggles to support her family as a chambermaid in a low-rent hotel, where the boss calls all female Muslim employees "Fatma."

Doria is certainly flip when it comes to Muslim culture, which represents her absentee father, illiterate mother and the omnipresent chauvinism in her community. But she's equally, if not more, critical of France, where she was born but where she still feels like an interloper. She describes her neighbors as mostly immigrants who "made the mistake of setting foot in this crappy country they thought would become theirs."

Even though Doria lives a few subway stops from Paris, her reality bears little resemblance to a tourist's view of the city. When she takes her mom to see the Eiffel Tower for the first time, it's too expensive for them to ride the elevator to the top. It's an elementary metaphor but a powerful one nonetheless: Doria was born in France, speaks French, was educated in the French school system, and yet feels like an alien in both her parents' Moroccan culture and mainstream French culture. The Louvre has as little to do with her life as does a North African village celebrating the arrival of a firstborn son. So Doria studies American culture, buying knockoff Levi's and zoning out, watching hours of shows on television (which she calls "the poor person's Koran") including such highlights as "The Young and the Restless," "Perry Mason," "Little House on the Prairie" and "Grease."

Doria's cultural displacement only underscores the universal alienation of the teen years. "What's the point of living?" she asks. "I still don't have breasts, my favorite actor is gay, there are pointless wars and inequality between people." Guène's political commentary is sharp enough, but her insight into high school is absolutely vicious. Doria lives through myriad adolescent horrors, told in dead-on details, like when she describes the one Euro sweatshirt her mom buys at a thrift store that she wears constantly until a snickering classmate tells her it says "sweet dreams" in English on it -- it's a pajama top. Teachers call her "exasperating, hopeless, the kind of student who makes you want to commit suicide." A worn jacket earns her the nickname of "Cosette," after the beleaguered, impoverished heroine of Les Misérables. There's a dark comedy in all the trauma, though. Her first kiss, with her tutor Nabil, is so bad, she says she was "scared he'd inhale me and I'd be a prisoner inside him" (again the imprisoned girls). When Doria and her mother aren't invited to a wedding, she sniffs that she'd rather not be a part of "the jetset," anyway.

It's tempting to see "Kiffe Kiffe Tomorrow" as prescient, to try to find a few answers to France's recent social unrest, from the riots to last spring's student protests over new labor laws unfavorable to young employees. Guène was sought out as a voice of the suburban teen during the riots, but refused to comment. Perhaps everything she has to say is already here. She writes of "parasitic journalists with their nasty reports on violence in the suburbs." She's not afraid to reveal the nastier details of life in projects, the elevators stinking of urine and drug dealers running rampant (even if, like Doria's crush Hamoudi, they can quote a little Rimbaud), but she also challenges the conventional wisdom that the Paris suburbs are entirely bleak. Paradise is a place where people look after each other, neighbors bringing Doria and her mom bags of groceries and slipping in 20 euro notes. It's not the France of "La Vie en Rose," but it is where Doria finds liberté, égalité, fraternité nonetheless.