Diplomats must set aside ideology and focus on the resolvable Lebanese-Israeli dispute. Only then can the wider conflict between the U.S. and Israel, and the Arab world, be addressed. 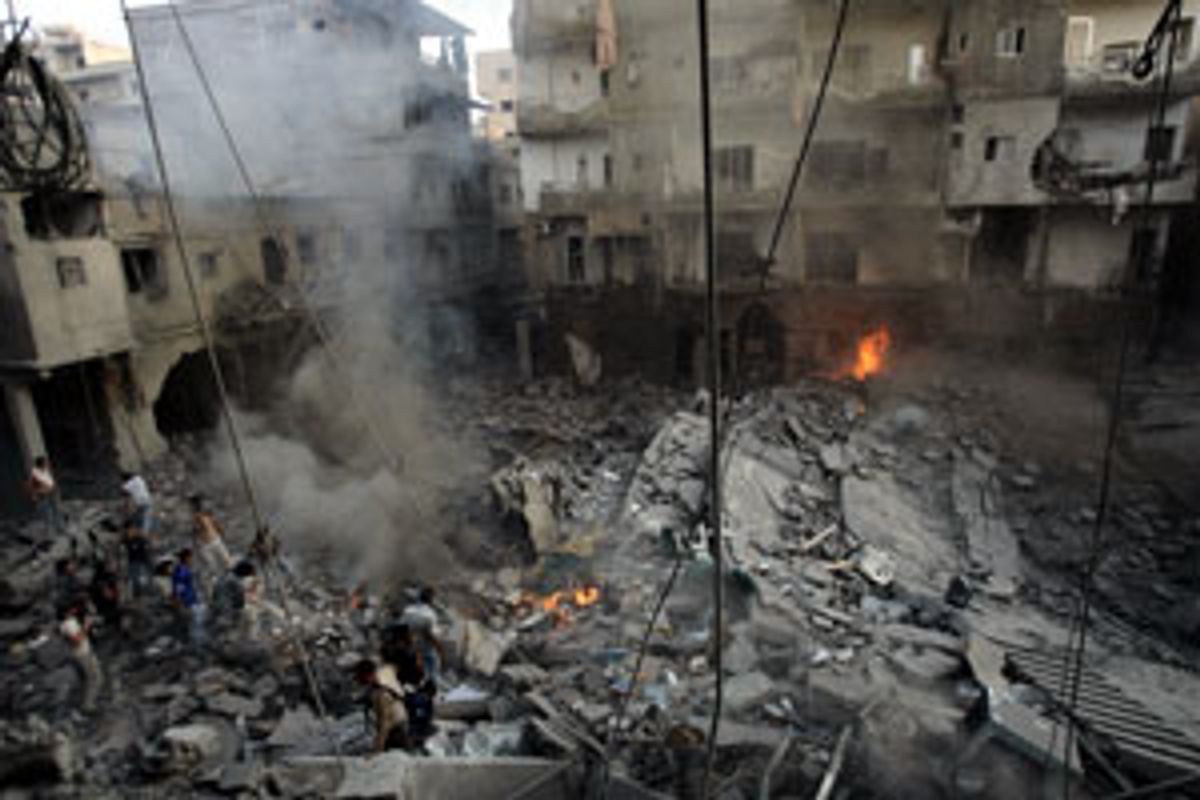 People search the rubble of a destroyed building, minutes after an Israeli warplane missiles attack in the center of the southern coastal city of Tyre, Lebanon, Wednesday July 26, 2006. Hezbollah inflicted heavy casualties on Israeli troops as they battled for a key hilltop town in southern Lebanon for a fourth day Wednesday, with as many as 14 soldiers reported killed and Lebanese officials confirmed that four U.N. observers were killed by an Israeli airstrike on their post Tuesday night. (AP Photo/Lefteris Pitarakis) (Lefteris Pitarakis)
--

This will be a decisive week in the current war between Israel and Hezbollah, as diplomatic efforts pick up steam and the focus shifts from fighting to negotiating. The outcome of diplomatic efforts could in turn be decisive for the wider Arab-Israeli conflict, and broad relations between the United States and the Arab world and Iran.

Lebanon is the epitome of the modern legacy in the Middle East of warriors in local battles who tend to be surrogates for larger combatants further afield. So it is important to unpack the various layers of confrontation and separate the issues at hand, in order to discern any chances of either a quick cease-fire or a lasting solution.

Important diplomatic movement under way might augur well for all concerned. First, Washington and Israel seem to have made two significant changes in their previous positions over the weekend, which open the door to many diplomatic possibilities. Washington now calls for an immediate cease-fire under certain conditions, after having told Israel publicly to ignore cease-fire calls and continue bombing Lebanon to smithereens. Israel for its part said it would accept a European Union- or NATO-led intervention force on the Israel-Lebanon border as part of a package of measures to resolve the conflict.

Second, Syria is making intriguing noises and statements about how it can help solve this problem, while the U.S. for its part gropes for a way to engage the Syrians without seeming to be engaging the Syrians, so as not to lose face.

Third, intense third-party diplomatic ideas and contacts are being offered by the United Nations, the E.U., France, Germany, Great Britain, Saudi Arabia, Egypt, Turkey and others.

Fourth, Hezbollah itself seems to have absorbed the initial Israeli-American military blows along with the political criticisms hurled against it from within Lebanon and the region. It seems to be exploring routes out of this dilemma, mainly by accepting that the Lebanese government handle diplomatic negotiations on the two abducted Israeli soldiers. Hezbollah is not in an enviable position. Fighting Israel and holding out for weeks wins it accolades from Arab public opinion, but also builds up the political retribution it can expect to receive from other Lebanese political groups when the fighting stops.

What is it that needs to be solved to stop the clashes, and why is this war taking place? That is a rudimentary question, but an increasingly relevant one, given the slow shift toward diplomacy, especially with the meeting in Rome on Wednesday of the U.S. and European and Arab parties.

Three concentric circles of confrontation are self-evident in the Lebanon-Israel situation: the immediate Lebanese-Israeli clash; wider regional confrontations involving Syria, Iran, Palestine, Israel and Arab leaders in Egypt, Jordan and Saudi Arabia who seem to fear Shiite empowerment; and a global confrontation between a U.S. that seems to want to revamp the Middle East region to suit American-Israeli preferences, and regional governments and popular forces that resist such hegemonic aims politically and militarily. Any successful attempt to quell the Lebanon-Israel clashes must consider which of these three is the most important problem to be resolved, or victory to be earned at the negotiating table rather than on the field of battle. A sure recipe for failure would be to lump all three circles together and hopelessly confuse a narrow bilateral dispute with the larger regional and global confrontations.

Negotiators should focus on the bilateral Israel-Lebanon dispute, but also commit to an equally serious attempt to resolve the underlying Arab-Israeli dispute in quick sequence. The two are inextricably linked as historical cause-and-effect, but they cannot be resolved together. Lebanon's fate also should not be held hostage to Palestine, Iran, Syria, American neoconservative ideology or any other such external factor.

The purely bilateral issues are few, and clear: Israel wants its two captured soldiers returned alive, and not to be attacked by Hezbollah rockets from southern Lebanon. Lebanon and Hezbollah want Israel to stop bombing Lebanese targets, leave the Shebaa Farms area it still occupies, return the few Lebanese prisoners it holds, and stop menacing Lebanon and intruding on its sovereignty by over-flights, sonic booms and occasional attacks.

A negotiated agreement on these points should be easy to achieve, given the several other understandings on these same issues that Hezbollah and Israel reached in recent years, and largely adhered to. An able mediator will craft an agreement that simultaneously or sequentially returns all prisoners, liberates occupied land, and stops mutual attacks and threats. The Israel-Lebanon bilateral situation would enjoy calm, but not a formal peace agreement.

If such an accord offered a sense of victory for both sides -- diplomacy's ideal outcome -- this would subsequently prod progress on the second circle, the Arab-Israeli conflict. Achieving an Israel-Lebanon cease-fire and permanent calm, on the basis of international law and mutual rights, implemented simultaneously, would have enormous positive implications for progress on wider regional and global issues.

This is the time for all concerned to focus sharply and narrowly on the technical issues in dispute between Lebanon and Israel, and set aside both hormone-driven egos and ideology-driven hegemonic aspirations. The bilateral issues can be resolved by humble, honest men and women, should any such folks wish to step up and identify themselves.

Rami G. Khouri is editor-at-large of the Beirut-based Daily Star, published throughout the Middle East with the International Herald Tribune.