Will the forever-compromising lawmaker take a real stand against Bush's illegal domestic spying -- or leave a legacy of spineless submission? 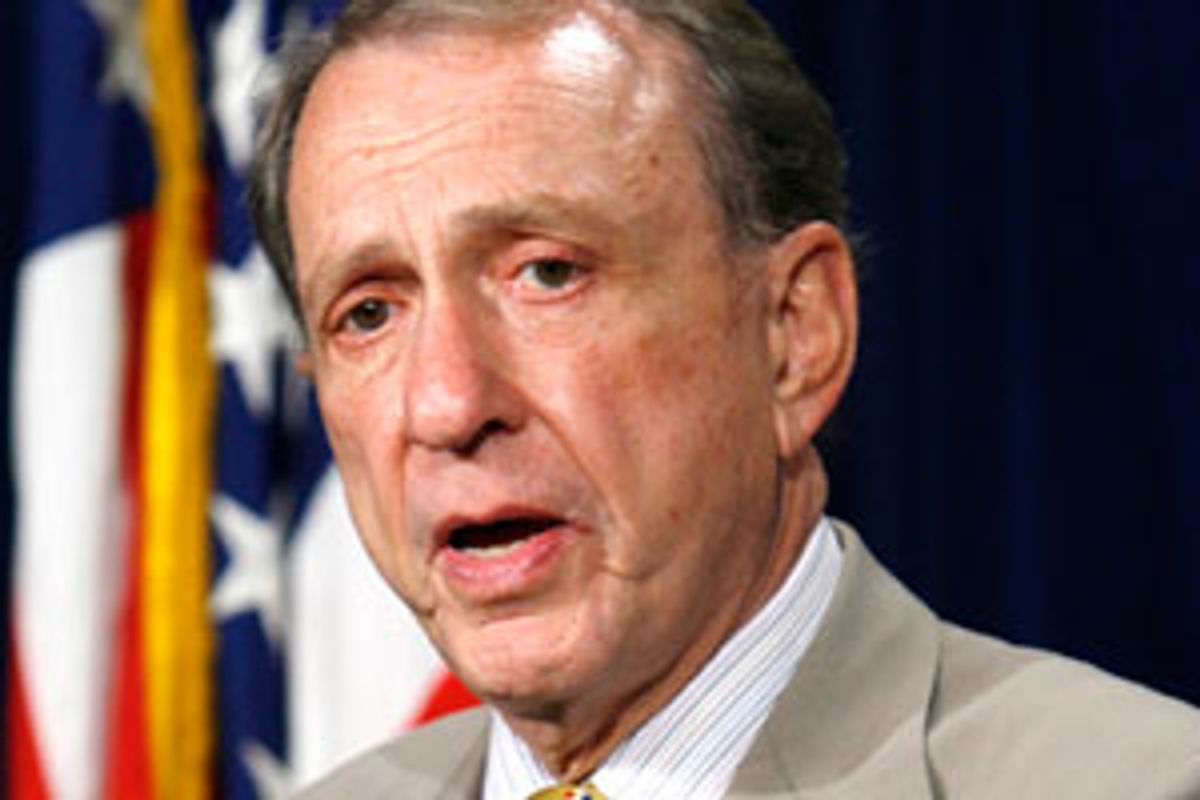 Even in a moment of apparent triumph, Sen. Arlen Specter could not help acknowledging his disappointment. "Is it frustrating?" he asked rhetorically at a press conference earlier this month regarding the National Security Agency's warrantless wiretap program. "Yes."

The Pennsylvania Republican had called the media to announce a deal with President Bush that would force a judicial review of the NSA operation, which Specter, the head of the Senate Judiciary Committee, has called a "flat violation" of existing law. His uneasiness with the White House came out only under questioning. Specter admitted that he still did not know much about the secret program itself, since the president has refused to brief him on the details. More tellingly, he appeared resigned to not knowing, as if frustration was a fact of life for Congress. "I am used to that," he said.

Such defeatism is rare among the upper ranks of the Senate leadership, especially among powerful chairmen like Specter, who has played a central role in just about every recent legislative battle, from Supreme Court nominees to the Patriot Act reauthorization to the gay marriage amendment. This spirit of resignation will again be put to the test Wednesday morning, when Specter convenes a hearing on his wiretapping bill, a proposal that would radically reshape the legal landscape for warrantless electronic surveillance on Americans and others inside the United States.

For Specter, such public dismay has become routine. Time and again, he has complained about disrespect from the White House, the overextension of executive power, and the limits of his ability to fight back in the current political environment. He has called hearings and chided administration witnesses. But when push comes to shove, he has also unflinchingly bowed to an apparent political reality, choosing compromise over confrontation and incremental procedural victories over significant, substantive ones.

Even at the symbolic high point of his career, during the opening of the confirmation hearing of Chief Justice John Roberts last September, Specter introduced the proceedings by signaling the hopelessness of the task at hand. "Nominees answer about as many questions as they think they have to, to be confirmed," he said of Roberts, who was widely considered a shoo-in at the time. It was an accurate observation, but not exactly the utterance one would expect from a senator who won his last reelection in 2004 on the campaign slogan "Courage. Clout. Conviction."

Specter's posturing has caused some to question the political legacy of one of the Senate's most remarkable members, a former prosecutor of pimps and prostitutes who rose from the courtrooms of Philadelphia to become the Supreme Court's Senate gatekeeper, always remaining a conundrum for both the left and the right. In his 26-year Senate career, he has been attacked as a pro-abortion liberal who upended the nomination of Robert Bork, Ronald Reagan's 1987 Supreme Court nomination. He has also been savaged as the mean-spirited inquisitor who defamed Anita Hill in 1991, after she testified she had been sexually harassed by Supreme Court nominee Clarence Thomas. In 2004, he nearly lost his reelection primary after a strong conservative challenge and was forced to beg for his committee chairmanship after conservatives mounted an effort to unseat him for being too moderate. In recent weeks, he has become a punching bag for liberal bloggers, who have called him a "bald-faced liar" and a "sellout" over his proposed surveillance legislation.

This tumultuous path brings Specter, at the age of 76, to the acme of his career, having survived a brain tumor, a heart bypass and a recent bout with Hodgkins disease. But rather than define himself as an unfettered champion of the values he proclaims, Specter has begun to resemble a living bookend to Frank Capra's fictional Mr. Smith, the naive everyman who went to Washington with an incontrovertible aversion to compromise. For Specter, "compromise" has become another term for victory, not defeat. As one Democratic Senate aide generously explained, "He is interested in the process, not the outcome." In recent months, Specter has bent to the will of the White House on certain revisions to the Patriot Act, the need to hold hearings on telephone companies' involvement in spying, and the warrantless wiretap program.

"The issue for Specter is: What does he think he is getting from this in terms of his reputation by just walking up to the line and flinching?" said attorney Bruce Fein, a veteran of the Reagan Justice Department. Fein has been working closely with Specter on legislation to challenge the numerous presidential signing statements Bush has been using to circumvent bills passed by Congress. "He is not going to be president," Fein said. "What is his legacy going to be?"

Specter's legacy may in large part be defined by the coming showdown over his warrantless wiretap bill. He has maintained that his "compromise" strikes a balance between the nation's national security needs, as defined by the White House, and the responsibility of Congress to exercise oversight, in this case by mandating judicial review of a secret program. But critics have charged that Specter is pulling a bait and switch. The bill might lead to judicial review, they say, but the bill also changes the rules by which the court will judge the president's program -- all but undoing the law that the program may currently violate.

"On the one hand, he seems to know that what the administration is doing is wrong," explains Lisa Graves, a lobbyist for the American Civil Liberties Union who previously worked on the Judiciary Committee's Democratic staff. "But on the other hand, he is unable to stop himself from helping to ratify it."

Specter has responded vigorously to his critics, who include an array of legal scholars, while emphasizing how difficult it was to strike any compromise at all with the White House. He rejects claims that the bill effectively repeals the Foreign Intelligence Surveillance Act, a 1978 law forbidding spying on Americans without a warrant. In a Washington Post opinion piece on Monday, Specter sought to dodge the criticism that his bill essentially yields to Bush's wartime claim on a constitutional power to ignore the law; he did so by arguing that the provisions in question were next to meaningless. "The president's power either exists or does not exist," he wrote, "no matter what any statute may say." As Fein put it, the Op-Ed amounted to "an anemic defense of a surrender."

Legal scholars on both sides of the political spectrum have pointed out that Specter seems to be missing the point. While it is true that the president derives his executive powers from the Constitution and not Congress, it is also true that the courts traditionally depend on Congress to help define the limits of those powers. By this standard, the Specter bill, if passed, may increase the chance that the courts will find the wiretapping program legal. "There is a subtle shift, and I think it's a shift that would strengthen the president's hand," explained Judge Richard Posner, of the 7th U.S. Circuit Court of Appeals, in an interview. "The formulation of the new bill suggests that the Congress is somewhat open to assertions of presidential authority."

When Specter came to the Senate in 1980, on the heels of Ronald Reagan's victory, he was known as a whip-smart and energetic politician who was not easily given to political compromise. "What he had to learn was that you had to get things done by working with a whole bunch of people," said Richard Fenno Jr., a congressional expert at the University of Rochester and the author of "Learning to Legislate," about Specter's efforts to pass a crime bill shortly after arriving in Congress. "My sense of him now is that he has learned it in spades."

Specter had first appeared on the political map 15 years earlier, as a Democratic graduate of Yale Law School who worked on the Warren Commission, authoring the "single bullet theory" to explain the assassination of John Kennedy. (His idea would earn him a derisive mention in Oliver Stone's conspiratorial movie, "JFK," decades later.) After switching to the Republican Party, he won election as district attorney in the Democratic bastion of Philadelphia in 1965 and 1969. When he arrived in the Senate, Specter showed no clear signs of subscribing to strict partisan ideology, regularly playing morning squash games with Sen. Carl Levin, the Michigan Democrat. One of his legal staffers from the early 1980s, Bruce Cohen, now serves as the chief counsel to Sen. Patrick Leahy of Vermont, the ranking Democrat on the Judiciary Committee.

In the decades that followed, Specter established a record of independence that partisans have found hard to handle. During the vote to remove Bill Clinton from office following impeachment, Specter opted for a third way by voting "not proven," an obscure reference to Scottish law. He voted with Democrats on a Republican tax-cut bill in 1999 but supported the Bush tax cuts in 2001. He repeatedly opposed President Bush's aversion to stem cell funding and offered only a procedural, nuanced view of the amendment to ban gay marriage. (This year he voted the amendment out of committee, but then opposed it on the floor. Still, he says he thinks states should be able to define marriage as exclusively heterosexual.) He has directed tens of millions of federal dollars back to Pennsylvania as a longtime member of the Appropriations Committee. Earlier this year, he became the only Republican to vote against Gen. Michael Hayden for CIA director, citing Hayden's involvement in designing the warrantless wiretap program that Specter now hopes to send to the courts.

"He is not an ideologue," says G. Terry Madonna, a professor of public affairs at Franklin and Marshall College in Lancaster, Pa. "For Arlen, it's as much about consulting him and making him a player and putting him under the tent."

That description may be as good as any to explain Specter's latest maneuvers. As committee chair, he has held four hearings on the warrantless wiretap program and has increased the committee's oversight of the Justice Department. But when faced with White House objections, he abandoned his earlier bill, proposed with Democratic Sen. Dianne Feinstein of California, which would have insisted the president adhere to the current system for authorizing electronic surveillance.

But then Specter appears to be less a maverick these days than a man who is resigned to his fate and satisfied to keep the trains running. At the end of his Op-Ed defense on Monday, he seemed an awfully long way from the courage, clout and conviction touted in his '04 campaign. "If someone has a better idea for legislation that would resolve the program's legality or can negotiate a better compromise with the president," he wrote, "I will be glad to listen."